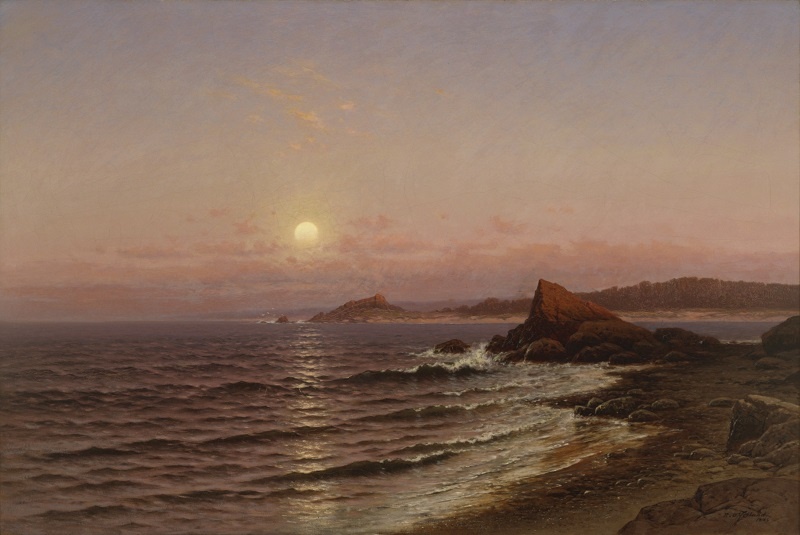 Above: Raymond Dabb Yelland, Moonrise over Seacoast at Pacific Grove, 1886. Oil on canvas, 40 x 60 in. Collection of the Oakland Museum of California, Gift of the estate of Helen Hathaway White and the Oakland Museum Women’s Board. A75.131.


(Sacramento, CA – October 30, 2018) The Crocker Art Museum is pleased to announce the opening of a new fall exhibition featuring 25 radiant paintings of West Coast scenery by Raymond Dabb Yelland, an esteemed British-born American artist who lived most of his life in the Bay Area and made great contributions to the California art world.

From Yelland’s arrival in Oakland in 1873 until his death in 1900, he rendered quiet coastal and marsh scenes and polished landscapes of beloved Northern California locations, moving from the Hudson River School and Luminist styles to techniques associated with the French Barbizon painters. This exhibition presents visitors with a unique opportunity to witness the nationally recognized painter’s evolution and maturation into an artist whose works have become synonymous with concepts of harmony and beauty.

“This is the first exhibition in more than 50 years to celebrate the life and work of an important 19th century painter who was a contemporary of many notable artists in the Crocker's permanent collection,” says the Museum’s director and CEO, Lial A. Jones. "We are excited to bring these remarkable paintings to Sacramento and offer the public a chance to see them all together at the Crocker.” 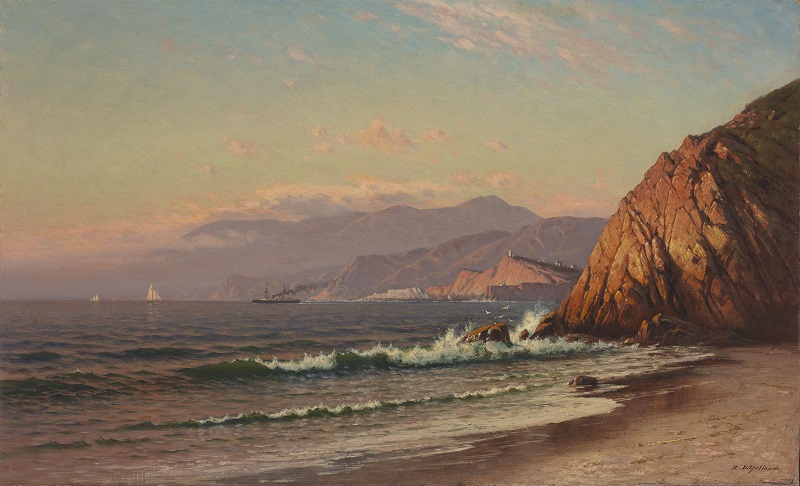 BACKGROUND: THE ART AND THE ARTIST
Born in London in 1848, Yelland emigrated to America with his family at age 3 and had decided by age 12 to pursue an art career. He studied at the National Academy of Design in New York, taught there for one year, and served in the Federal Army during the American Civil War.

As a newlywed, he sailed with his bride around Cape Horn to California in 1874 and settled in Oakland, where he painted scenes of the Northern California coastlines and nearby marshes. He purchased a summer home on the Monterey Peninsula, a serene location where he was inspired to paint many of his most iconic coastal scenes.

A generous instructor, Yelland taught art at Oakland’s Mills College, The California School of Design in San Francisco, and at UC Berkeley. Through his evolution, Yelland became known for pursuing a variation of the Hudson River School style, known today as Luminism. Along with prominent Eastern artists such as John F. Kensett, Fitz Henry Lane, and others, Yelland explored harmonies created by light reflected in atmosphere.

Alfred C. Harrison, Jr., the Crocker’s guest curator of the exhibition, notes that the painting “Point Bonita from Point Lobos,” is one example wherein the artist skillfully contrasts the sunset warmth of the headlands with the cool blue of the ocean.

“As the orange and blue tones recede into the distance, they become attenuated in harmonious gradations, adding to the serenity of the painting and constituting much of its emotional appeal,” Harrison explains. “Yelland depicts delicate, cottony waves sliding into the shore in a peaceful manner, giving it his signature, tranquil mood.”

Coast scenes were only one aspect of Yelland’s repertoire. His trips to Oregon and Yosemite inspired depictions of mountain scenery more in line with works by famed landscapists Thomas Hill and Albert Bierstadt.

“While the Yosemite Valley has become a favorite location for many painters, Yelland’s rendition is unique in its power and beauty,” Harrison adds. “It projects his personality in subtle ways, particularly in the inconspicuous red accents scattered throughout the composition. This unifying element, combined with Yelland’s distinctive brushstrokes, results in the creation of a work of art, not a colored photograph.” 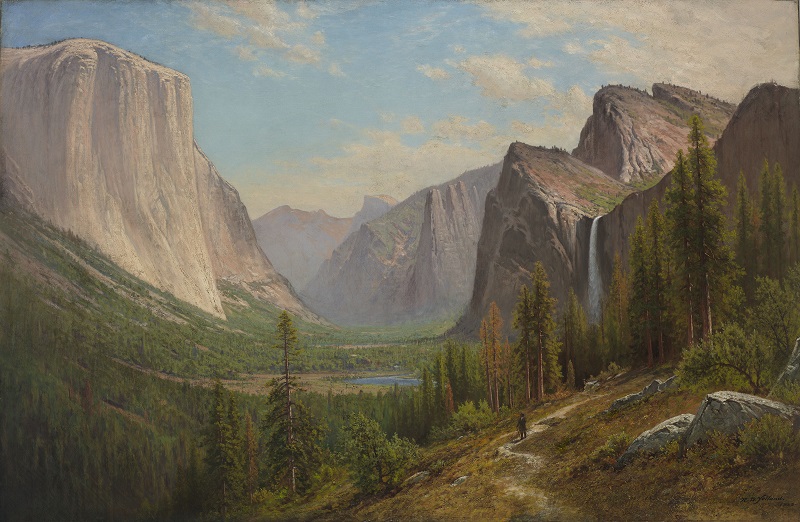 In the 1880s, as the French Barbizon aesthetic replaced the Hudson River School style of painting, Yelland increasingly painted humble subjects in a more loosely handled, intimate style made popular by the French painters. One of Yelland’s major influences was artist George Inness, who advocated coordinating the color scheme of a painting into “harmonies,” a strategy that can be seen in many Yelland landscapes of the 1890s.

Harrison says that despite responding to mainstream trends in landscape art, Yelland was essentially a realist. “Regardless of his subject matter, his ability to mimic reality in paint was remarkable. It is in large part the believability of his fictions that provides his work with such strong emotional appeal.”

An active and recognized member of the community, Yelland maintained a studio on San Francisco’s Pine Street until his death in 1900 at his Oakland home. 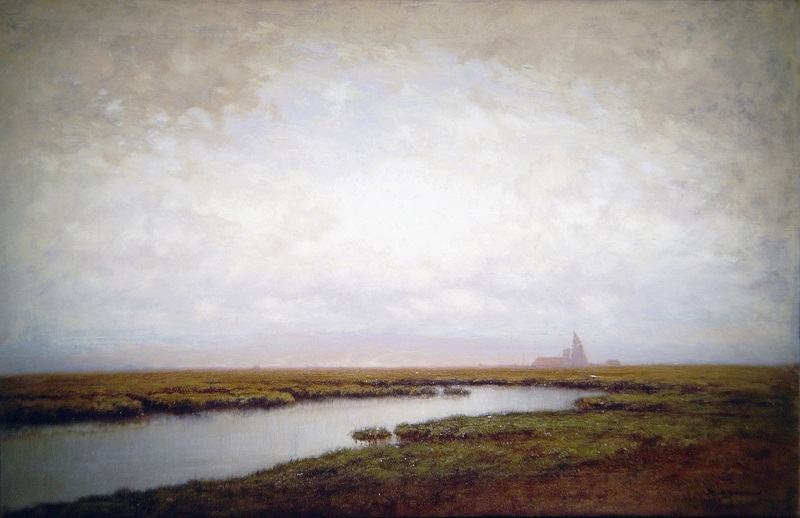 Raymond Dabb Yelland, Where Sluggish Tides Creep In, 1894. Oil on canvas, 20 x 30 in. Collection of Eleanor and Richard Johns.

High-resolution images of some of the works in this exhibition, and an exhibition checklist, are available to writers and members of the press upon request.

For information on these and other Crocker events and programs, click HERE.


ABOUT THE CROCKER ART MUSEUM
Through engaging, innovative, and life-changing interactions with art, the Crocker Art Museum provides meaningful opportunities for people of divergent backgrounds to find common ground. Founded as a public/private partnership in 1885, the Crocker features the world’s foremost display of California art and is renowned for its holdings of master drawings and international ceramics, as well as European, Asian, African, and Oceanic art. The Crocker serves as the primary regional resource for the study and appreciation of fine art and offers a diverse spectrum of exhibitions, events, and programs to deepen visitor’s understanding of art, including films, concerts, studio classes, lectures, and an array of activities for families and children. More information about exhibits and programs can be found at crockerart.org