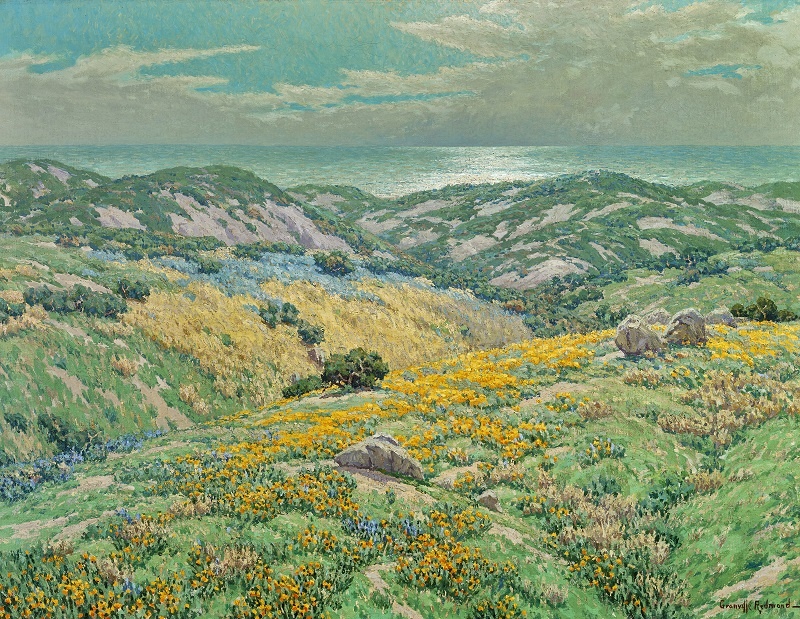 (SACRAMENTO, CA — updated December 16, 2019) The Crocker Art Museum is pleased to announce the premier of “Granville Redmond: The Eloquent Palette," a traveling exhibition of some 85 early California landscapes that together comprise the largest survey of the Impressionist painter’s work ever assembled.


Widely considered the top early California artist, as well as one of the best landscape painters in the state's history, Granville Redmond (1871–1935) produced a diverse body of work that captures California’s diverse topography, vegetation, and color. He is remembered today as a brilliant colorist and as the foremost painter of California poppies in their natural setting. “The Eloquent Palette,” organized by the Crocker Art Museum, includes scenes representing coastal locations across the northern, central, and southern parts of the state. The paintings range in style from contemplative, Tonalist works that evoke a quiet calm to bold and colorful Impressionist views. There is also a selection of Redmond’s dramatic nocturnes. This is the first time in 30 years that Redmond’s work has been featured in a major solo exhibition.

“As home to the world’s foremost display of California art, the Crocker is proud to organize this career-spanning exhibition of work by one of the state’s most prominent and beloved artists,” says the Museum’s Executive Director and CEO, Lial A. Jones. “We are delighted to provide the public with this opportunity to appreciate his legacy.”

The exhibition and its accompanying scholarly publication make a landmark contribution to the study and understanding of Redmond’s life and art. The publication, written by the late Mildred Albronda and the Crocker Art Museum’s Associate Director and Chief Curator Scott A. Shields, is a greatly expanded version of an unpublished manuscript by Albronda, whose scholarship focused on California artists who were deaf. Shields’s expanded text explores the duality of the painter’s approach, which suggests two very different sides of the man himself and provides an unprecedented view into Redmond’s career. The volume also contains the most comprehensive chronology of Redmond’s life and art ever published.

“Most beloved in Redmond’s lifetime and today are his colorful and buoyant Impressionist views, which connote his charming personality and optimism,” says Shields. “The other side is revealed in his Tonalist scenes, which Redmond himself preferred. These were deeply meditative, and because they suggest his need for solitude and silence, they have often been interpreted as a reflection of the silent world in which he lived.”

Some of the paintings in the exhibition are owned by museums, including the Crocker, but most are drawn from private collections throughout California and other states.

BACKGROUND: THE ART AND THE ARTIST
Born in Philadelphia, Redmond contracted scarlet fever as a toddler, which left him permanently deaf. He was able to speak a few words before his illness but lost this ability shortly thereafter. His family moved to San Jose, California, and enrolled him as a boarding student at what was then the California Institution for the Education of the Deaf and Dumb, and the Blind in Berkeley (today California School for the Deaf in Fremont), where the staff encouraged their students’ artistic pursuits.

“Though he had been completely deaf since early childhood, this was not as debilitating for Redmond as it was for many at the time,” says Shields. “Redmond’s artistic talent, combined with a jovial personality, made him popular both among deaf and hearing communities.”


At the school, Redmond studied art under painter/photographer Theophilus Hope d’Estrella and sculptor Douglas Tilden. In 1889, he enrolled at the California School of Design in San Francisco, training with Raymond Dabb Yelland, Arthur Mathews, and others. In 1893, he found inspiration in a new instructor, Ernest Peixotto, who reinforced his desire to study abroad. That same year, Redmond realized his ambition of traveling to Paris and began his studies the Académie Julian in Paris.

The following summer, Redmond set off for the countryside to paint and returned to Paris in the fall to prepare a work for the Paris Salon. “Matind’hiver (Winter Morning),” which is included in the Crocker exhibition, was accepted into the Salon; the highest honor that an artist could obtain at the time. While in France, Redmond also spent periods working near the forest of Fontainebleau, the haunt of Barbizon painters. Poverty eventually forced him to return to Los Angeles in 1898, where his parents now lived. There, he found inspiration in the regional terrain. “This is a beautiful place,” he wrote. “The scenery excels that of France.” While in Los Angeles, Redmond opened a studio, married, and started a family.

Early in his career, Redmond’s paintings tended to be somber in hue. Though his landscapes would become bolder in color and more Impressionistic in approach, the artist personally preferred Tonalist scenes set at dusk or illuminated by moonlight. He ultimately became known for his landscapes laden with California poppies, which he often paired with lupine that provided a perfect, blue-purple complement to the poppy’s orange-yellow hue.

“The poppy seemed to simultaneously represent California’s history of mining, its importance as an orange grower, its perennial sunshine, and its amber hillsides in summer,” says Shields. “In 1903, the California State Legislature approved the golden poppy as the state flower, prompting its proliferation on objects of all kinds, including decorative arts and paintings.” 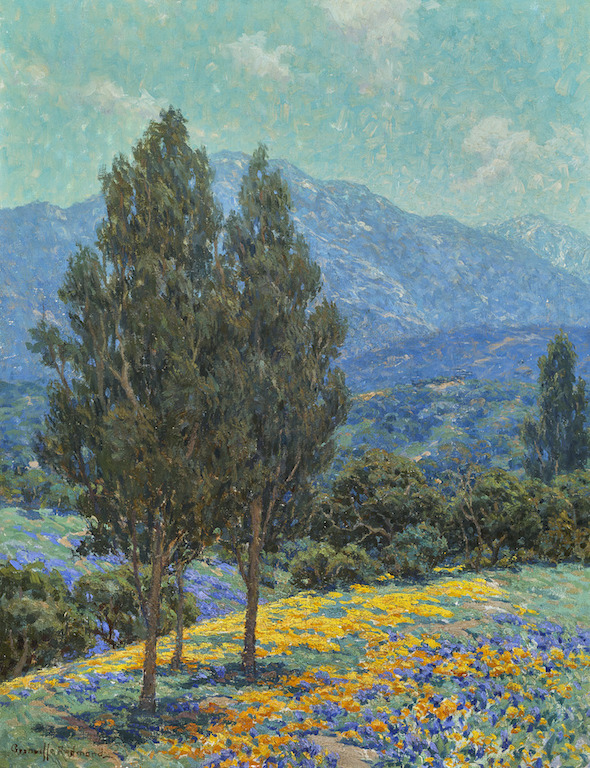 Redmond painted up and down the coast of California, spending extended periods in Los Angeles, Monterey County, and the San Francisco Bay Area, his studios in the Bay Area located in Menlo Park and Belvedere. He also spent weeks at a time painting in Laguna Beach and Santa Catalina Island.

In 1917, because war conditions had made landscape painting unprofitable, Redmond returned to Los Angeles. Expressive and having long been good at pantomime, the artist decided to test his abilities in Hollywood’s motion-picture industry. He met silent-film star Charlie Chaplin, who ultimately cast him in several minor roles; he also pursued bit parts under other directors. Chaplin greatly admired Redmond’s paintings and even offered him a studio in which to paint. The actor wrote of his friend’s canvases: “There’s such a wonderful joyousness about them all. Look at the gladness in that sky, the riot of color in those flowers. Sometimes I think that the silence in which he lives has developed in him some sense, some great capacity for happiness in which we others are lacking.” [1]

Redmond remained in Los Angeles for the rest of life, balancing his movie schedule with time spent painting. Until the end of his career, his sunlit poppy scenes remained popular, which continued to provide him with income. He died of a heart ailment at age 64, leaving behind paintings that embody two distinct sides of his personality.

“The introspective, Tonalist works elicit a quiet calm that has much to do with his contemplative nature and, perhaps, the silent world he lived in,” says Shields. “The riotous color of his Impressionist paintings, by contrast, suggests that ‘great capacity for happiness’ that Chaplin and others so admired.” 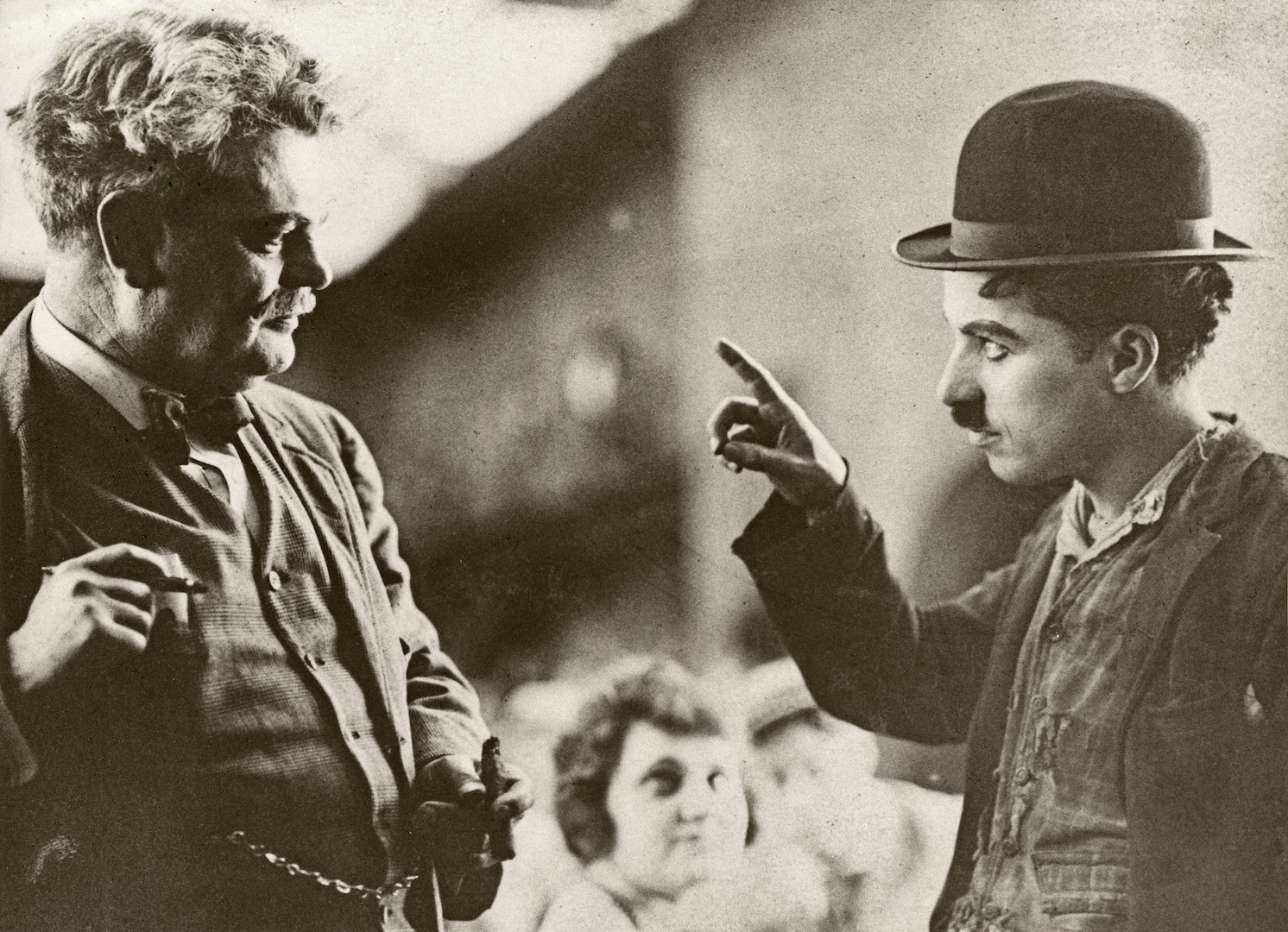 Following its display at the Crocker, "Granville Redmond: The Eloquent Palette" will travel to the Laguna Art Museum (June 27–September 20, 2020).

High resolution images of several works in the exhibition are available to members of the press upon request.