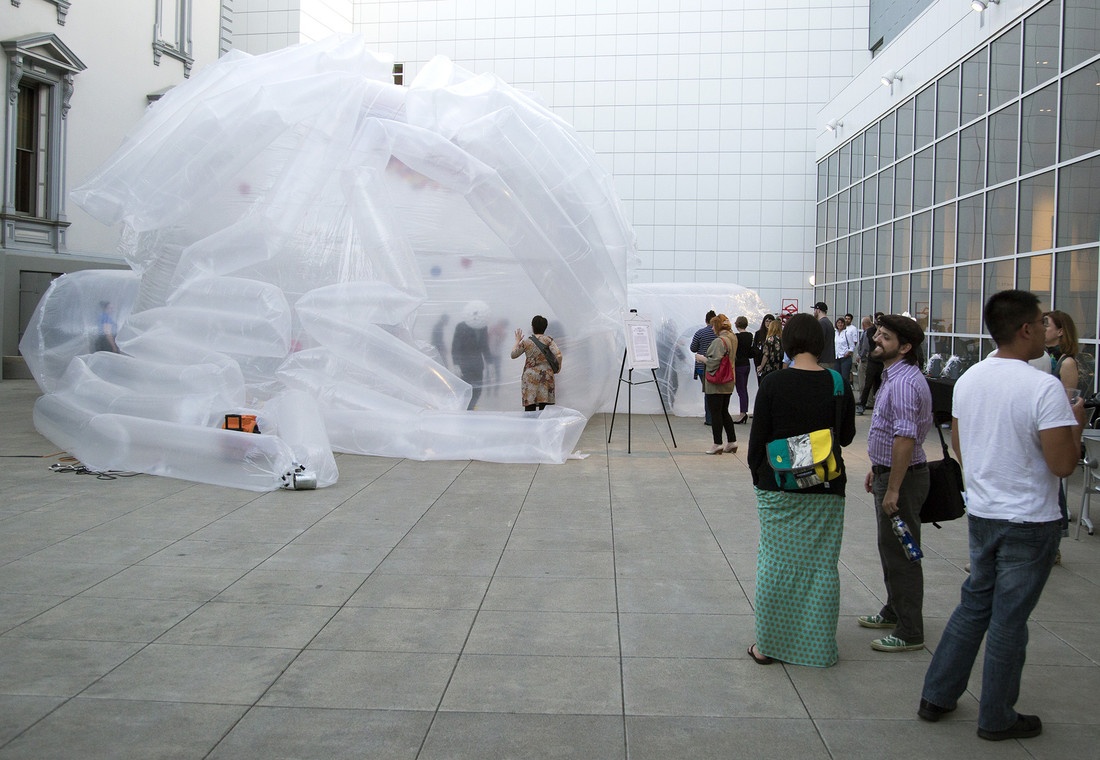 We're teaming up with California State University, Sacramento's Department of Arts and Letters for U-Nite, a celebration of all things art. Join us for lots of engaging performances, talks, film screenings, and art of all shapes and sizes by nationally recognized faculty. We've rounded up a few of the performances we think are indicative of the night's quality and breadth. A full list of participating professors is available at the end of the article.


Megan Brunsvold Mercedes is a dance educator, scholar, choreographer, and performer. Her research examines the intersection between dance science, aesthetics, and pedagogy. Notable shows include a performance with the Metropolitan Opera Ballet in the critically acclaimed revival of Berlioz’s Les Troyens and Stravinsky’s Le Sacre du Printemps.

Megan is presenting She & Him, a solo contemporary dance performance. The dance was originally choreographed as a duet. Unfortunately, her collaborator was unable to perform due to health complications, though according to Megan, “though once a portrait of intimacy and various modes of connection between two people … the work now explores notions of absence, loss, and memory.” 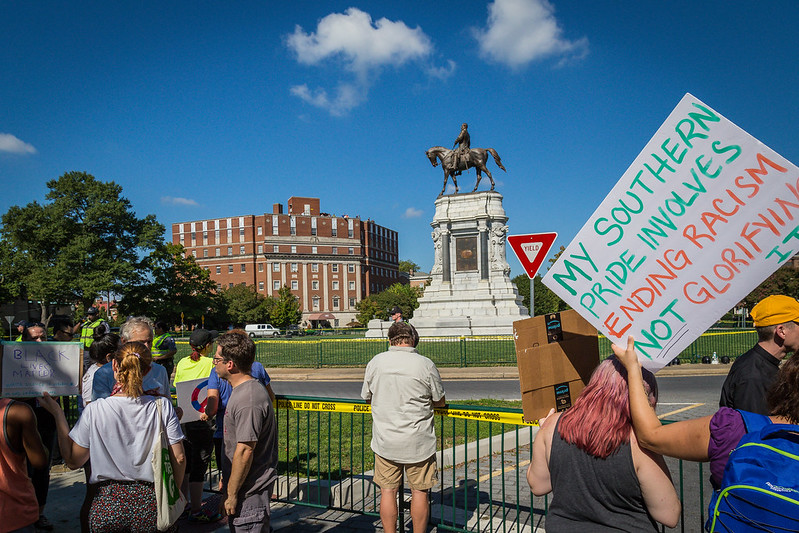 Hundreds of people rallied at the Robert E. lee Statue in Richmond, Virginia on September 16, 2017 to demand its removal and to counter pro-Confederate statue demonstrations. Dr. Mya Dosch's lecture will explore what we should do with public monuments to history that we no longer want to celebrate. Image via Flickr / Mobilus in Mobili.

Mya Dosch teaches courses on U.S. and Latin American art, race and representation, and public art. Her project, Creating 1968: Art, Architecture, and the Afterlives of the Mexican Student Movement, received the 2019 Association for Latin American Art Biennial Dissertation Award. Dosch’s work can be found in Future Anterior, Sculpture, and the forthcoming exhibition catalog, No calles, manifiéstate, which looks at the Mexican artist collective Grupo Suma.

Dosch is exploring a question that many municipalities have struggled with: What should be done with public monuments to histories that we no longer want to celebrate? Her presentation outlines the creative approaches — from graffiti to video projections — that artists across the hemisphere have taken to rewrite the history told by public artworks.

Michelle Felten’s extensive resume includes the national touring shows of 42nd Street as Dorothy Brock, and Nunsense II as Sister Robert Anne; Off-Broadway and world premieres. Felten is operating of Tiamat, a five-headed dragon from her directorial project She Kills Monsters, for U-Nite. The puppet was created by Theatre and Dance Staff Scenic Artist Stephanie Conrad and features moving jaws and an articulated neck / head.

Dr. Forbes-Erickson is a theatre scholar, director, designer, and mixed media sculptor who focuses on odyssey and journey. Her scholarly research includes theatre practice-as-research, theatre history, literature, text, criticism, and theory. She has exhibited and designed for theatre in England, the Czech Republic, Canada, the Caribbean, and the United States. She is presenting Black Feminist (Re) Memorials in Performance, a digital media installation based on digital media used in theatre productions around Black feminist themes in the plays. 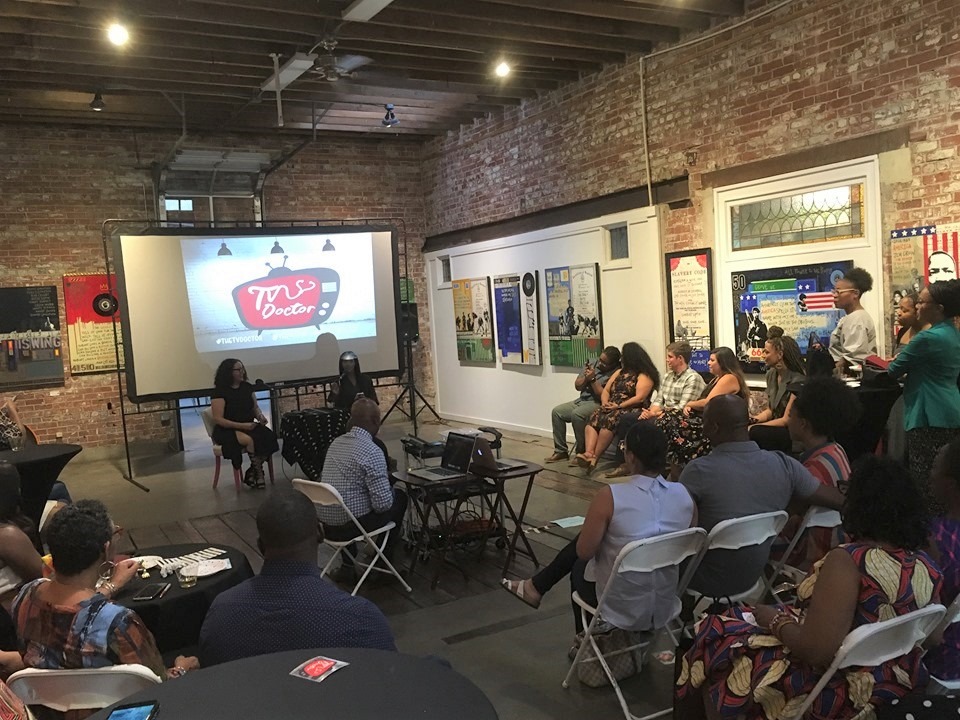 Michele S. Foss-Snowden teaches courses in Media Aesthetics and Television Criticism. She recently launched The TV Doctor, a podcast that "prescribes" television shows for what ails us. Pictured: The launch of Dr. Foss-Snowden's podcast, via Communication Studies at Sacramento State's Facebook page.

Michele S. Foss-Snowden teaches courses in Media Aesthetics and Television Criticism. Her research focuses on representations of marginalized communities in entertainment media. She is also the host of The TV Doctor podcast, a show that “prescribes” television as the cure for what ails us.

Dr. Foss-Snowden is doing a live recording of her podcast along with Rachel Marthaler, a graduate student in the Department of Communication Studies. Marthaler’s research focuses on the aesthetics of television narratives, specifically adaptations from film and literature. The two will discuss the benefits (and possible “side effects”) of experiencing fine art as it is represented in various types of television programming.

Torsa Ghosal is the author of an experimental novella, Open Couplets (Yoda Press, India). Her essays and fiction have appeared in Literary Hub, Catapult, Bustle, Entropy, Himal Southasian, and elsewhere. Her writings have been shortlisted for the International Sundance Screenwriter’s Lab, DNA-Out of Print short fiction contest, and was an honorable mention for Pigeon Pages Flash Fiction Competition 2019.

Dr. Ghosal will read an excerpt from her in-progress novel Fish Eyes. The book tells the story of a close-knit, genteel family that moves to a Himalayan town along India’s northeastern border at the turn of the millennium. The newly-arrived family unintentionally causes ethnic tensions to flare up, deepening animosities in the town. 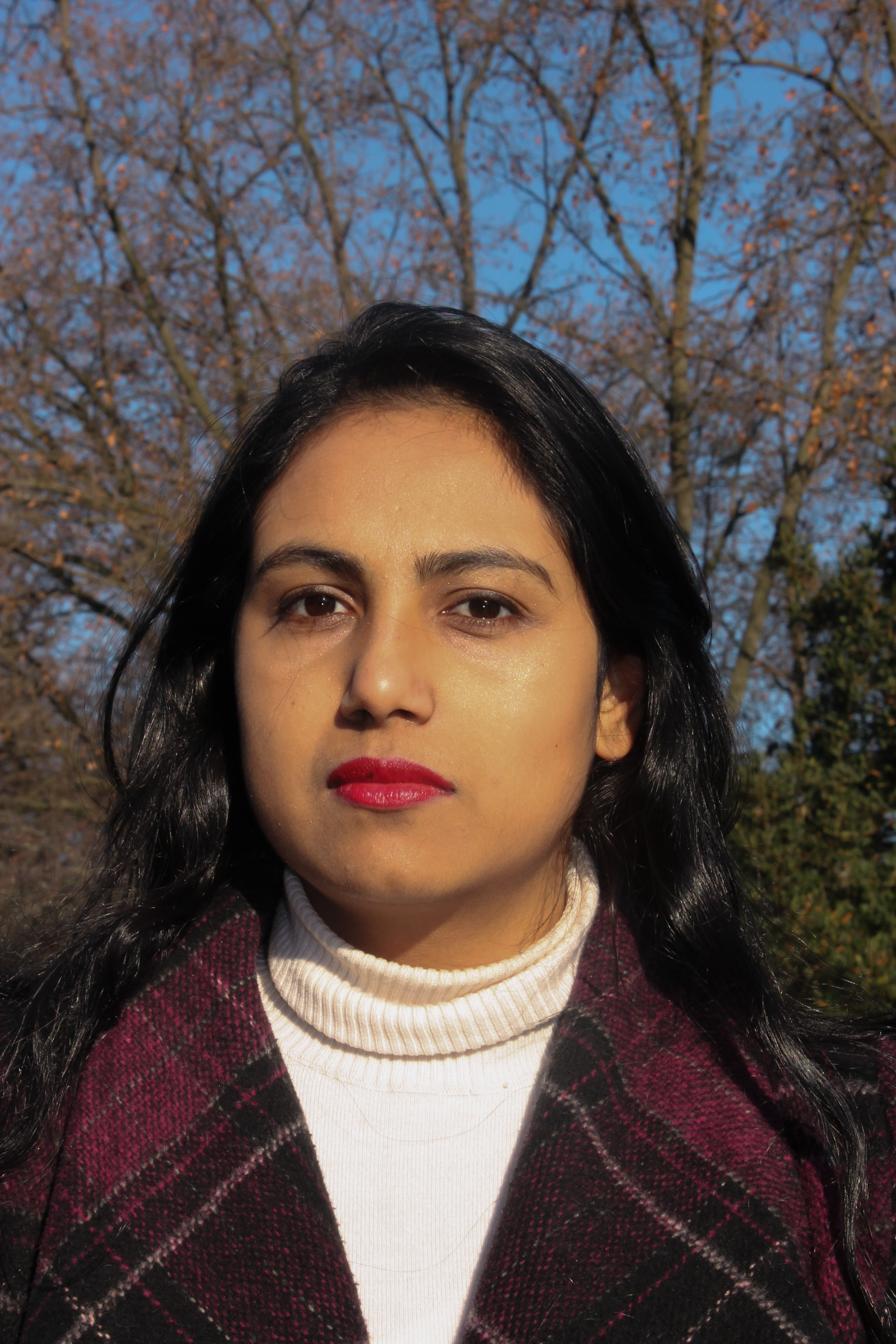 
Gregory, Miller, and Seery-Murphy are giving a three-part presentation on various cultural and material histories of the body in the medieval and early modern world (Monstrous Births in the Middle Ages, The (In)Corrupt Body of St. Francis Xavier, and Revolutionary Desecration of French Royal Graves and the Mazarinades respectively.) The body has been a rich object of interpretation in the study of medieval and early modern history. The talk consists of three case studies that reveal how the human body has been represented, venerated, and utilized for ideological purposes.

Dan Janos is a Sacramento filmmaker and musician whose work explores domestic life, relationships, and the creative process. His films have been featured at South by Southwest, Chicago Underground Film Fest, BFI London LGBTQ+ Fest, and the Sundance Channel, among others. He recently produced his fourth album, Excelsior! with his band, The Goat Family.

Mr. Janos is showing FLORA MY DEAR , a short experimental animation with sound. The film follows a lesser known episode in famous photographer Eadweard Muybridge’s life, where he murdered his wife’s lover in a fit of jealousy. The short animation relies on Muybridge’s still images and motion studies, text and contemporary smart phone footage to re-imagine the murder and the motive behind it.

Divide by Mikko Lautoma. According to the artist, "Divide is about decision making and community building. The effect of gravity, like money, is stronger the more you have."

Mikko Lautamo’s work uses coding and computer vision to create interactive installations and projections. He focuses on the interplay of complex systems: social, economic and biological. Lautamo is setting a up live, software generated, interactive art installation for U-Nite. Participants are invited to dance, move, shake and make music and animated images with their movements. There will be a short discussion on how the visual instrument works before audience members are invited to make some noise!

Nicole C. Limón’s credits include directing Enfrascada by Tanya Saracho, and Water by the Spoonful by Quiara Alegría Hudes; playing Older Dede in In the Time of the Butterflies and presenting original work at New York University Tisch School of the Arts, sponsored by Women and Performance Journal. She is also the Associate Artistic Director of Teatro Espejo, a local Latinx theatre company, and author of BeYOU(--‐tiful), a play about women’s journeys told through an indigenous perspective.

Limón is presenting Rooted and Rising, a multidisciplinary devised performance weaving spoken word, chant, indigenous song, and cultural dance forms. It honors personal herstory, ancestry, and identity, while contemplating and responding to current global events. The piece is simultaneously a ceremony and a performance, investigating pathways to healing and empowerment. 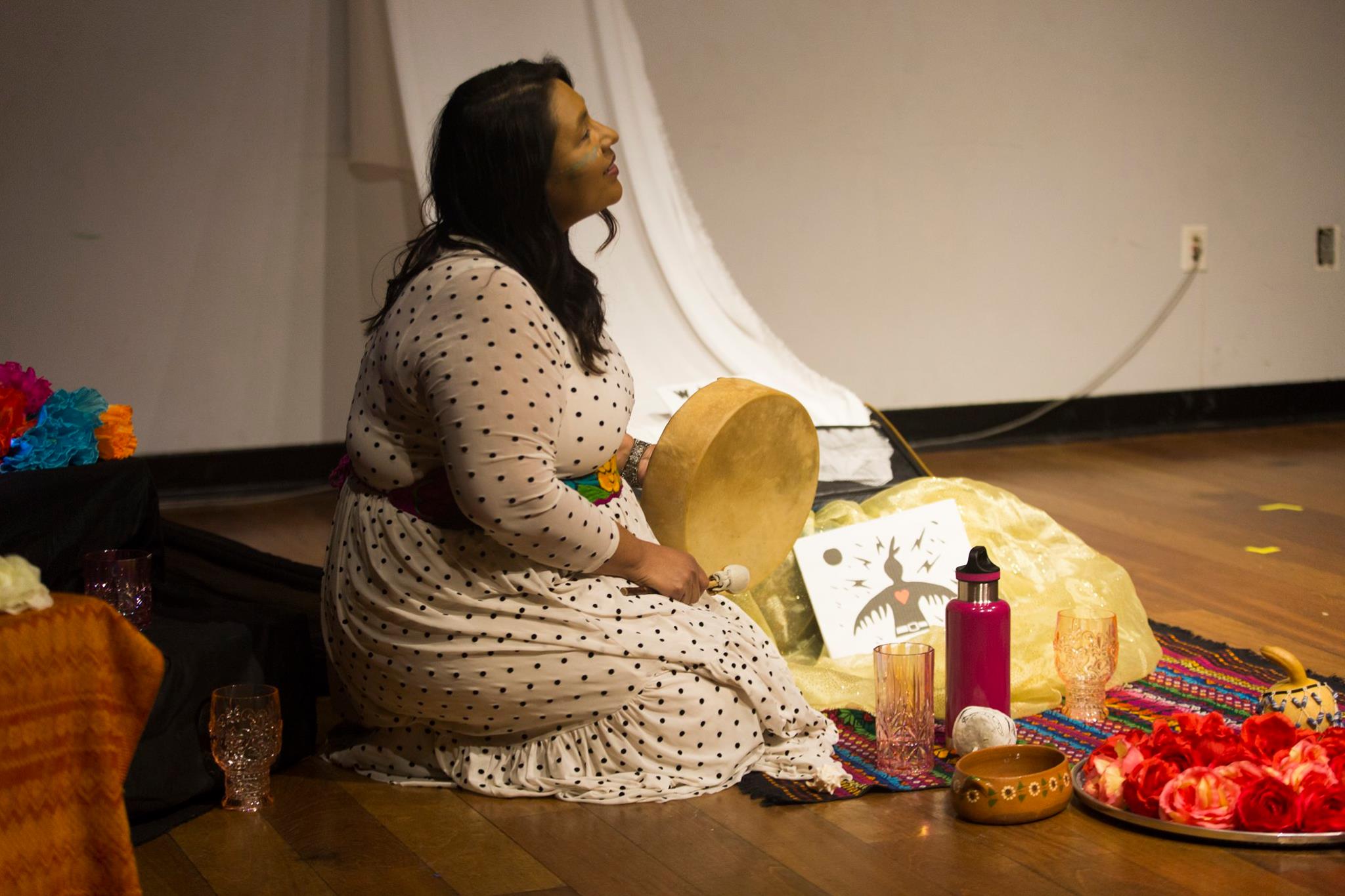 Professors Manker, Orbal, Dubois, and several students are creating a “flash mob” inspired by the Tsam Festival, a masked circle dance used to dispel obstacles to health and well-being at the start of the new year. Their version uses costumes, themes, and symbolic objects commonly found in mainstream American culture, so that participants can more easily understand the power of the ritual. The performance will be preceded by a short explanation and audience participation is encouraged.

Joshua McKinney and Rosa Martinez are presenting poetry from their current body of work. McKinney will read from his new book of poetry, Small Sillion (2019); Martínez will read published poems from a book-manuscript, The Bittersweet of it All.

McKinney’s work has appeared in journals like the Boulevard, Denver Quarterly, Kenyon Review, New American Writing, and many others. He is the recipient of The Dorothy Brunsman Poetry Prize, The Dickinson Prize, The Pavement Saw Chapbook Prize, and a Gertrude Stein Award for Innovative Writing. He is co-editor of the online eco-poetry zine, Clade Song.

Martinez was recently named a finalist for an annual poetry contest (2019). While receiving her Ph.D. in English from University of California, Berkeley, she co-curated The Holloway Series in Poetry & Mixed Blood Project. Her scholarly work has appeared in the Journal of Lesbian Studies. 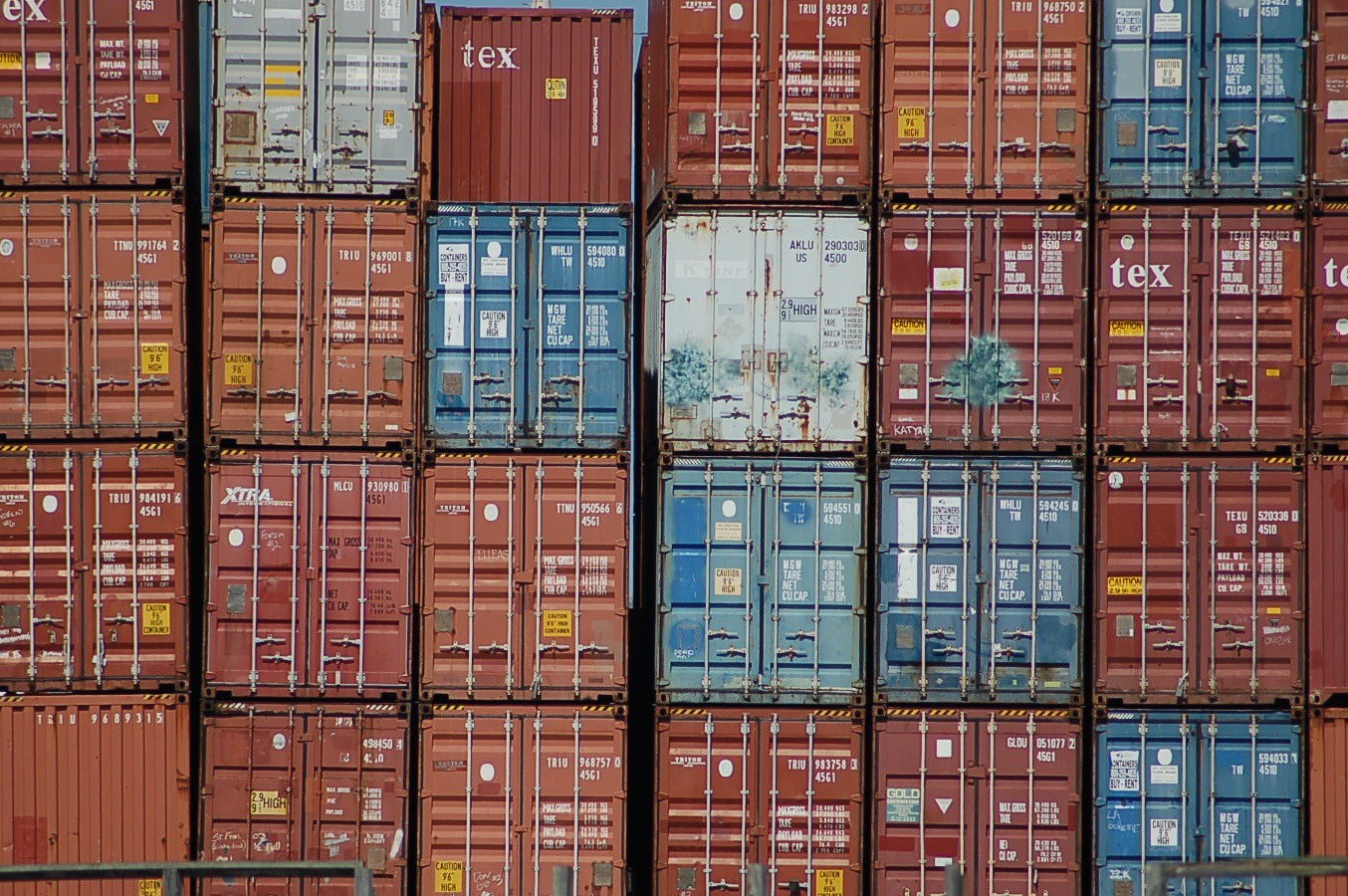 Mark Roddy believes that pre-engineered metal buildings and repurposed shipping containers are the dream of modern architects — despite the fact that they’re seen as low-tech and utilitarian.

Mark has 25 years of experience practicing architecture, with over 50 design awards and 50 publications to his credit. He believes architecture should be expressive and environmentally responsible, achieving a balance between beauty and function. He argues that, “architecture is so much more than creating great buildings. A good architect knows how to balance design and creativity with understanding and communication.”

For U-Nite, Mark will argue that modern architecture failed in its promise to provide affordable housing through manufacturing. Instead, it’s created architecture for the elite. Mark believes that pre-engineered metal buildings and re-purposed shipping containers are the dream of modern architects — despite the fact that they’re traditionally seen as low-tech and utilitarian. The presentation includes a look at some of Mark’s related work.


Samuel Brett Williams is an award-winning playwright, screenwriter, and director. His plays have been produced in New York, Los Angeles, Scotland, Russia, and throughout the United States. His feature film, The Revival premiered at Outfest, where the Los Angeles Times made it a Critic’s Pick. The film played worldwide and received a North American theatrical release. It is currently streaming on Amazon Prime and Hulu.

Williams is screening EXPECTING, starring Natalie Canerday (October Sky, True Detective). The short film tells the story of a teenage girl that finds out she is pregnant on the day she is set portray the Virgin Mary. The film debuted at the Palm Springs Film Festival before winning the Arkansas Film Festival. Like The Revival, it has been played at festivals around the world.

Top Image: An air-inflated artwork representing the human brain at U-Nite 2014. Guests were encouraged to write the names of any medications they had used on helium balloons, which were released inside the sculpture. Photo via Sac State/Steve McKay.

Toolkit for Partners of the Crocker