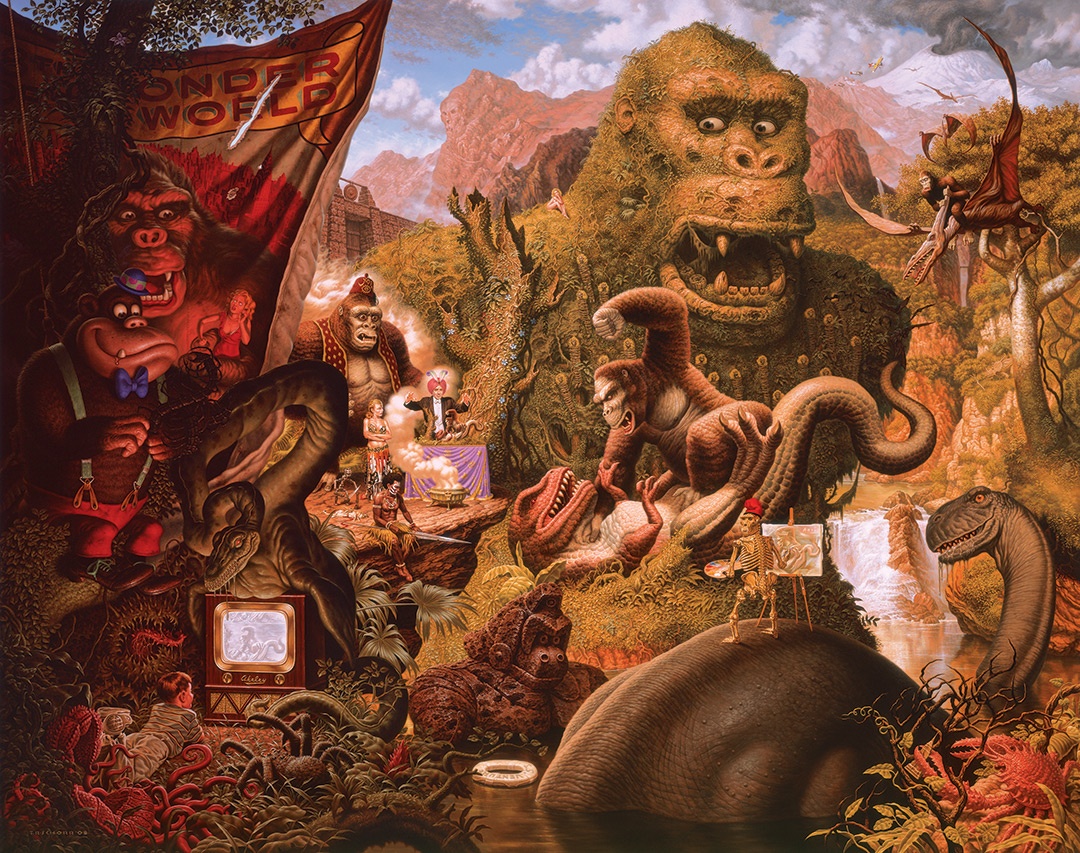 
In 2017, Todd Schorr’s colossal painting featuring the abominable snowman delighted Crocker visitors as they entered the summer blockbuster exhibition, Turn the Page: The First Ten Years of Hi-Fructose. Now, the Crocker welcomes the Los Angeles-based artist back to Sacramento for an in-depth, one-person show.

Todd Schorr: Atomic Cocktail highlights approximately 30 examples of Schorr’s iconic paintings, sculptures, and preparatory studies, including rarely seen works. Named for the plethora of logos, cartoons, monsters, mascots, and other Atomic Era imagery, the exhibition explores Schorr’s appropriation of mid-20th century American popular culture, which he crafts into a pictorial language all his own.

Born in 1954, Schorr grew up in the small suburban town of Oakland, New Jersey. Expressing a “compulsion for drawing” at an early age, his parents enrolled him in art classes when he was five, which he continued through high school. He was deeply affected by fantasy movies — in particular, the 1933 classic King Kong . “Seeing that movie when I was 4 or 5 was the first time I was able to really believe in a fantasy world,” he says. He was also heavily influenced by early animated cartoons, especially those of Walt Disney’s studio and Max Fleischer (creator of Popeye and Betty Boop).

In 1966, when Schorr’s mother took him to see a Salvador Dalí retrospective at Manhattan’s Gallery of Modern Art, he connected the surreal, pliable-looking figures in Dalí’s work to those in the cartoons on television. The experience made a lasting impression. In the artist’s most recent publication, Neverlasting Miracles (2017), he recalls: “I began to realize what unbridled imagination and remarkable technical skills could achieve.”


In 1970, Schorr visited the Uffizi Gallery in Florence, Italy, and started to formulate the idea of combining his love of cartoons with the painting techniques of the Old Masters. He enrolled at Philadelphia College of Art (now The University of the Arts), where his painting instructors steered him toward illustration. “When I got to college, there was nothing in the gallery scene [combining] cartooning and surrealism,” he explains. After graduating in 1976, he moved to New York City to begin his professional career in illustration, creating album art, movie posters, and magazine covers for clients like AC/DC, George Lucas, Francis Ford Coppola, and Time. 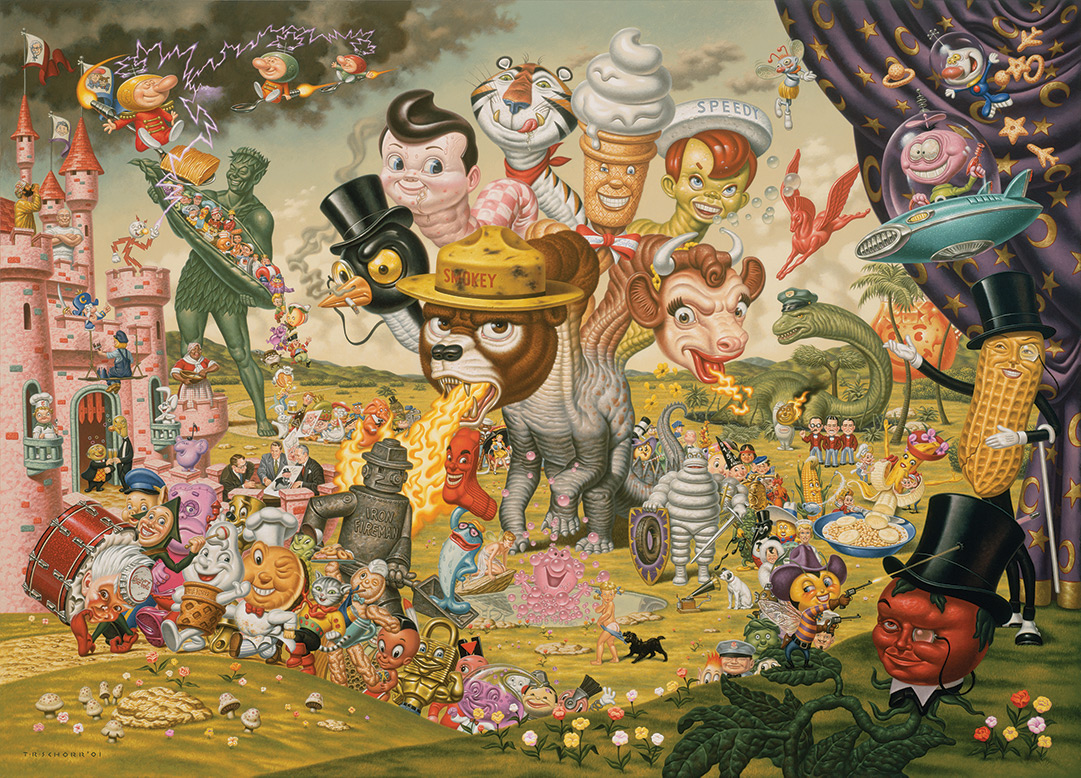 Despite his success over the next decade, Schorr began to feel stifled by the creative limitations of commercial work. In the mid-’80s, he took a break from illustration to focus on fine art, developing his signature, intensely hued wonderlands.

The style and influences of Schorr’s complex narrative paintings are drawn from a multitude of sources, spanning from Northern Renaissance art to 18th- and 19th-century Romantic painters and contemporary illustration. In The Hydra of Madison Avenue, for instance, he depicts more than 50 familiar brand mascots parading through the landscape. “I consider myself a cultural anthropologist and use pop culture reference points in my work because they strike an emotional resonance with people while also forming a common pictorial language that’s accessible to just about everyone,” he said in an interview with Paul di Filippo, whose essay is featured in Neverlasting Miracles.

The scale and intensity of detail in works like In The Hydra of Madison Avenue are reminiscent of large Renaissance altarpieces filled with intricate detail. Combined with an influx of 20th-century commercial characters, the artist underscores the pervasive presence of media in our lives in connection with his experience of growing up during the rise of Madison Avenue’s advertising men. 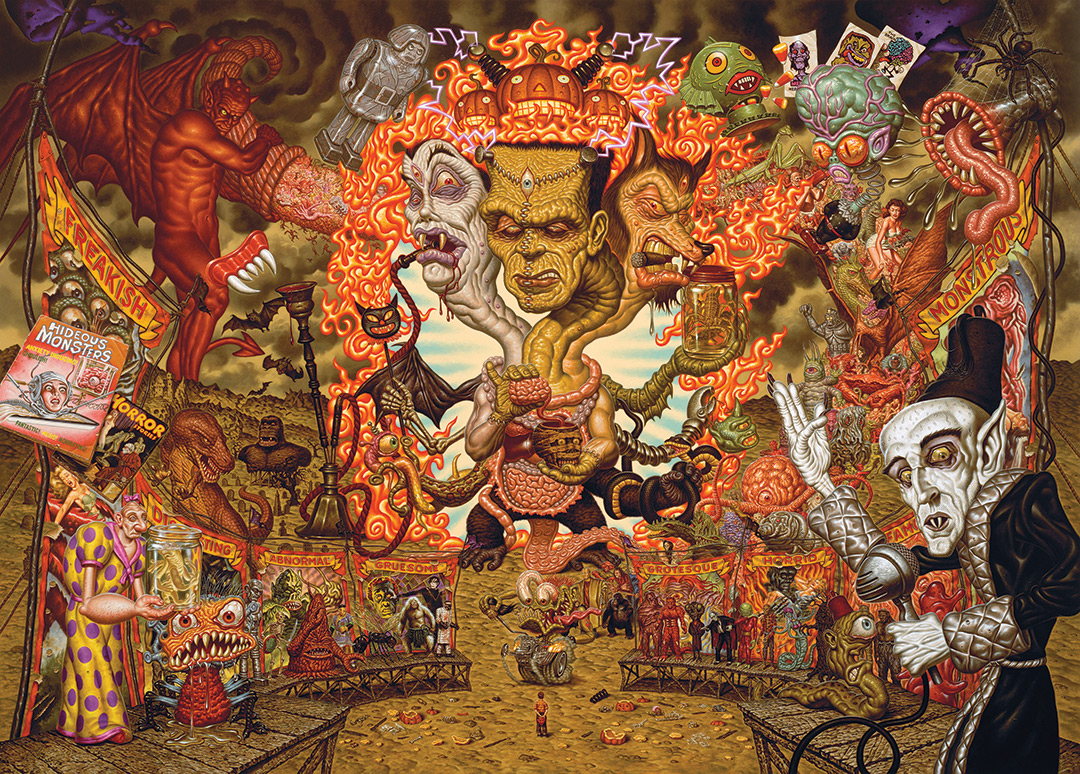 
In 1992, Schorr had his first solo exhibition at the Tamara Bane Gallery in Los Angeles. Encouraged by an overwhelmingly positive response, he was determined to pursue a fine-art career. “From that point on,” he says, “I just painted for myself.” He relocated to Los Angeles in 1998, garnering attention as an early member of the Lowbrow or Pop Surrealist movement emerging there at the time, which has since become a global phenomenon. Today, he works on both coasts, dividing his time between California and Connecticut.

Todd Schorr: Atomic Cocktail was organized by the Virginia Museum of Contemporary Art, Virginia Beach. The exhibition is scheduled to open on July 26, 2020 and close on January 31, 2021. Dates subject to change.

About the Author: Assistant Curator Christie Hajela earned her M.A. in History of Art and Architecture at the University of Oregon, Eugene, and her B.A. in Art History and in English at the University of California, Davis. She developed an interest in California art during her previous tenure as a gallerist, focusing on West Coast Abstract Expressionism and Bay Area Figurative artists. At the Crocker Art Museum, her current focus is contemporary art. Recent exhibitions include: Cool Clay: Recent Acquisitions of Contemporary Ceramics (2019); Chiura Obata: An American Modern (2019); History, Labor, Life: The Prints of Jacob Lawrence (2019); Hopes Springing High: Gifts of Art by African American Artists (2018); Turn the Page: The First Ten Years of Hi-Fructose (2017); and Forbidden Fruit: Chris Antemann at MEISSEN® (2017). Christie authored the exhibition catalogue, Modern Menagerie: Sculpture by Loet Vanderveen (December 9, 2018 – March 31, 2019) and continues to serve as in-house curator for both internal and traveling exhibitions.