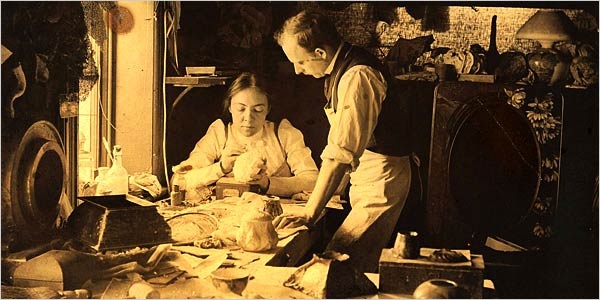 
Louis Comfort Tiffany (1848–1933) employed dozens of artisans. Given that Tiffany considered his name to be a brand, he rarely spoke publicly of designers, whether male or female, who worked for him. Many of his principal designers were women, but “Tiffany Girls,” by company policy, could not be engaged or married. Although considered discriminatory today, this was a convention of traditional gender roles during the Gilded Age. At the time, Tiffany was lauded for his progressive efforts to employ women. It was also considered surprising that Tiffany employed women in his glasshouse in Corona (Queens), New York, where the glass used in lamps and windows was created. At Tiffany’s studios, women physically cut glass and patterns, and worked on copper foiling of glass.

“Tiffany Girls” is a phrase that is now commonly used to described women employed at Tiffany’s various companies. The names of many “Tiffany Girls,” including Alice Gouvy, Julia Munson, Clara Driscoll, and Agnes Northrop, were rediscovered in 2005 through a close reading of Driscoll’s trove of letters housed at the Queens Historical Society and the Kent State University Library. From these letters, scholars learned that women did hold leadership roles within Tiffany’s companies. Although it has been suggested that during his lifetime Tiffany suppressed his women designers in terms of creativity and accolades, Driscoll’s letters suggest otherwise.

Clara Wolcott Driscoll (1861–1944) was a principal designer who led the Women’s Glass Cutting Department within Tiffany’s companies and oversaw upwards of 35 women designers at any given time. Hired in 1888, Driscoll worked on-and-off for Tiffany until 1909. When she married her first husband, Francis Driscoll, she left her position in accordance with company policy. However, she returned upon Francis’ death four years later. In 1896, she quit for the second time following her second engagement. The disappearance of her fiancé shortly thereafter cleared the way for Driscoll to return to Tiffany’s employ for a third and final time. In 1909 her career working for Tiffany officially ended when she remarried. From her letters, scholars know that Driscoll grew progressively involved with the business side of Tiffany’s companies, aiding in strategic decision-making for the department of lamps and fancy goods. Required to stay updated on trends and commercial practices, Driscoll often did not have the time to experiment in ways similar to many of the pottery and enamel designers. In addition to the famous Dragonfly, Poppy, Cobweb, and Wisteria lamps that are now credited to Driscoll, it is known that she designed inkstands, desk accessories, tea screens, trivets, candlesticks, and mosaics. 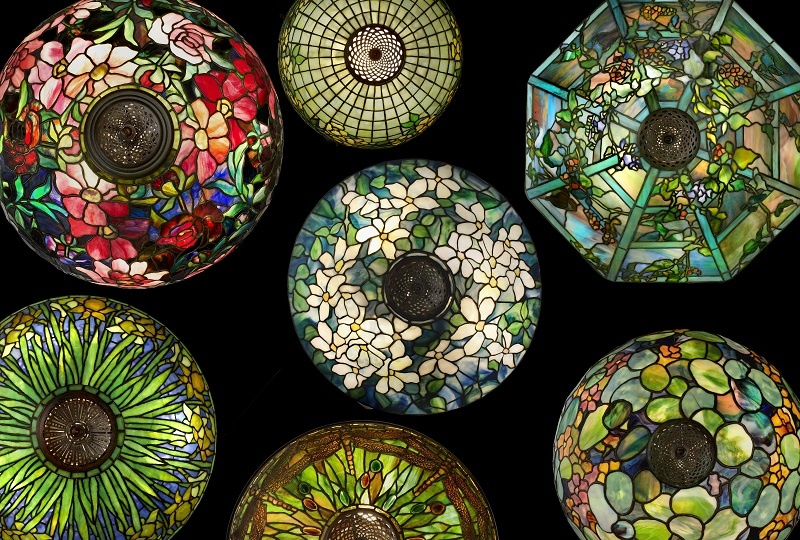 Tiffany Studios, Group of lamps (birds-eye detail). The Dragonfly Lamp, ca. 1902–1906, at the bottom center, is credit to Clara Driscoll and made of blown glass and patinated bronze. Photograph by John Faier. © 2013 The Richard H. Driehaus Museum.

Agnes Fairchild Northrop (1857–1953) primary designs were floral and landscape motifs. Like Driscoll, Northrop worked extensively for Tiffany’s companies, beginning in 1884 and continuing until the closure of Louis C. Tiffany Studios Corporation in 1938. One of six women working at the Corona glasshouse, Northrop was praised for her highly detailed and colorful glass windows that included representations of hollyhocks, foxgloves, clematis, birch trees, autumn foliage, mountains, and aspects of natural terrain. Northrop and Driscoll were invited to the Brittany region of France by Tiffany in 1907 to draw and experience the landscape. The trip likely inspired subsequent nature-based designs. Many of Northrop’s well-known works are large-scale windows, including Autumn Landscape 1923–1924, now owned by the Metropolitan Museum of Art, although she did sketch ideas for lamp shades.

One process-based point that is essential to note: the creation of a Tiffany lamp or glass window was always a collaboration. A designer might draw or paint the initial idea or theme, but numerous individuals, from glassmaker and glass cutter to pattern maker and artisan completing copper foiling, contributed to the final product.