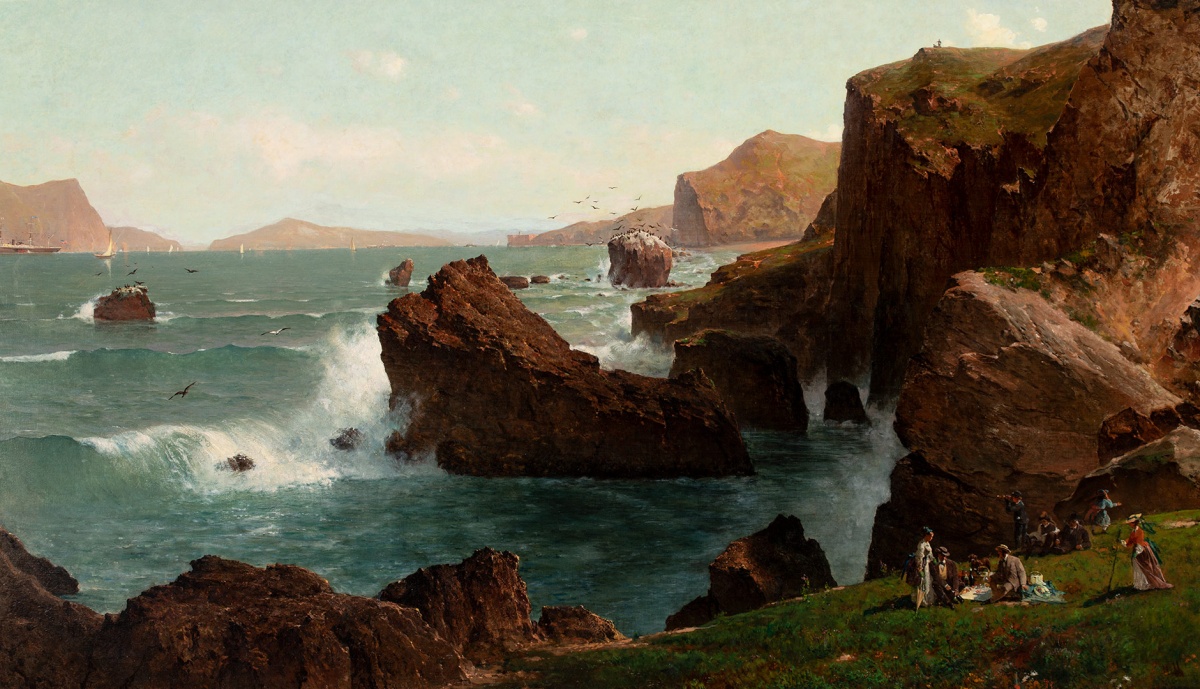 Thomas Hill (1829–1908) and William Keith (1838–1911) were two of California’s most respected artists of the late-19th and early 20th centuries, though neither was a California native. Hill was born in Birmingham, England, and came to the United States as a youth in 1844, following his father to Massachusetts. Keith was born in the small village of Oldmeldrum, Scotland, and moved with his mother to New York at age 23 in 1850. In California, both artists became well known for painting the Golden State’s most spectacular and rugged terrain.

Hill apprenticed to a carriage painter and later joined an interior decorating firm in Boston. In 1853, he moved to Philadelphia, where he studied at the Pennsylvania Academy of Fine Arts. A year later, he visited the White Mountains of New Hampshire, a region associated with painters of the Hudson River School. In 1861, at the outset of the Civil War, he departed for California.

In the summer of 1856, Keith apprenticed as a wood engraver in New York. He then put his skills to use at Harper Brothers publishers, staying with the company until 1859 when he came west and settled in San Francisco. At first, he worked as a commercial artist but soon sought to pursue painting. In 1863, he hired still life painter Samuel Marsden Brookes to give him lessons in oil painting. He subsequently studied in Düsseldorf, Germany.


Hill made his first sketching trip to the Sierra Nevada in 1865 and ultimately became known for his depictions of Yosemite Valley. After he traveled to France in 1866 and became acquainted with the Barbizon style, his approach became more expressive. Like Hill, Keith depicted the Sierra Nevada, Yosemite Valley, and other notable natural landmarks. As his career progressed, his landscapes became increasingly domesticated and spiritual.

The two works, recently purchased for the collection by Melza and Ted Barr, are both large in scale and broad in scope. The Hill landscape is set on the outskirts of San Francisco, looking toward the Golden Gate with Angel Island in the distance. At right, in an area near Point Lobos, picnickers are enjoying the day, while other sightseers take in the view at the upper right. Also visible in the center distance is Fort Point, an 1850s masonry fortification built to defend San Francisco Bay against naval attack — and which today sits below one end of the Golden Gate Bridge.

Keith’s landscape is set in the wilderness, though smoke from a small campfire near the water indicates the presence of people. Keith sometimes traveled to places like this in the company of naturalist John Muir. Having met in 1872, the men became good friends, often sharing philosophical conversations in nature while Keith sketched. In 1875, Keith and Muir, along with educators John Swett and J. B. McChesney, are known to have visited Mount Hoffman, Toulumne Meadows, Soda Springs, and Mono Lake, and to have camped along the Owens River.

About the Author: Trained at the National Gallery of Art, the Metropolitan Museum of Art, and the Philadelphia Museum of Art, Crocker Art Museum Curator William Breazeale is the organizer of many exhibitions including The Language of the Nude: Four Centuries of Drawing the Human Body, A Pioneering Collection: Master Drawings from the Crocker Art Museum, and Reuniting the Masters: European Drawings from West Coast Collections. With a Ph.D. from the University of Maryland and a dissertation on Italian sketchbooks, he is the author of articles for Master Drawings including "Old Masters in Old California: The Origins of the Drawings Collection at the Crocker Art Museum," "Nature and a new drawing by Otto Marseus van Schrieck," and "Two Small Heads by Giulio Romano in the collection of the Crocker Art Museum." In addition to coordinating major exhibition catalogues, he has organized exhibitions on Italian paintings and European and American prints for the Crocker, as well as serving as coordinating curator for many loan exhibitions hosted at the Museum, including 2015's The Age of Albrecht Dürer: German Drawings from the École des Beaux-Arts, Paris.