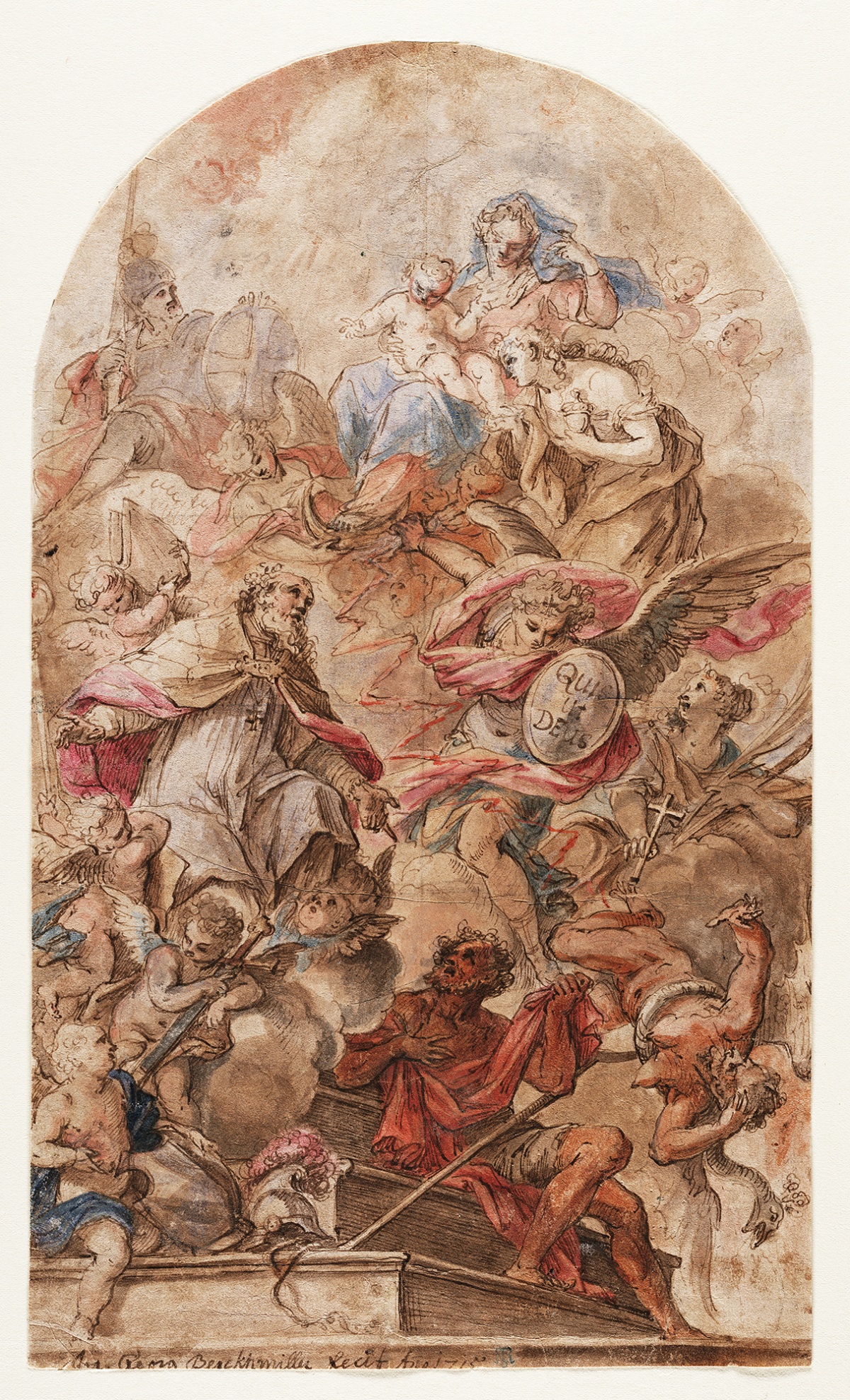 
In the 21st century, the collecting and study of 18th century German drawings has become a major focus for American museums. One of the finest such collections has been in California for nearly 150 years. The forward-thinking purchase of German drawings by E. B. Crocker during the family’s European tour from 1869–1871 brought a superb resource to Sacramento, from Baroque altarpiece designs to Neoclassical mythologies. Representing artists from Dresden to Bremen, the collection provides a panorama of German draftsmanship throughout the century.

Johann Georg Bergmüller’s Baroque design (top) is a preparatory drawing for an altarpiece that survives in the small town of Tannheim in southern Germany. It is most likely the drawing shown to the patron for approval since the scene, which depicts many saints clustered around Saint Martin petitioning the Virgin and Child, was changed somewhat in the final version. Bergmüller makes the multifigured composition more legible through the use of color. 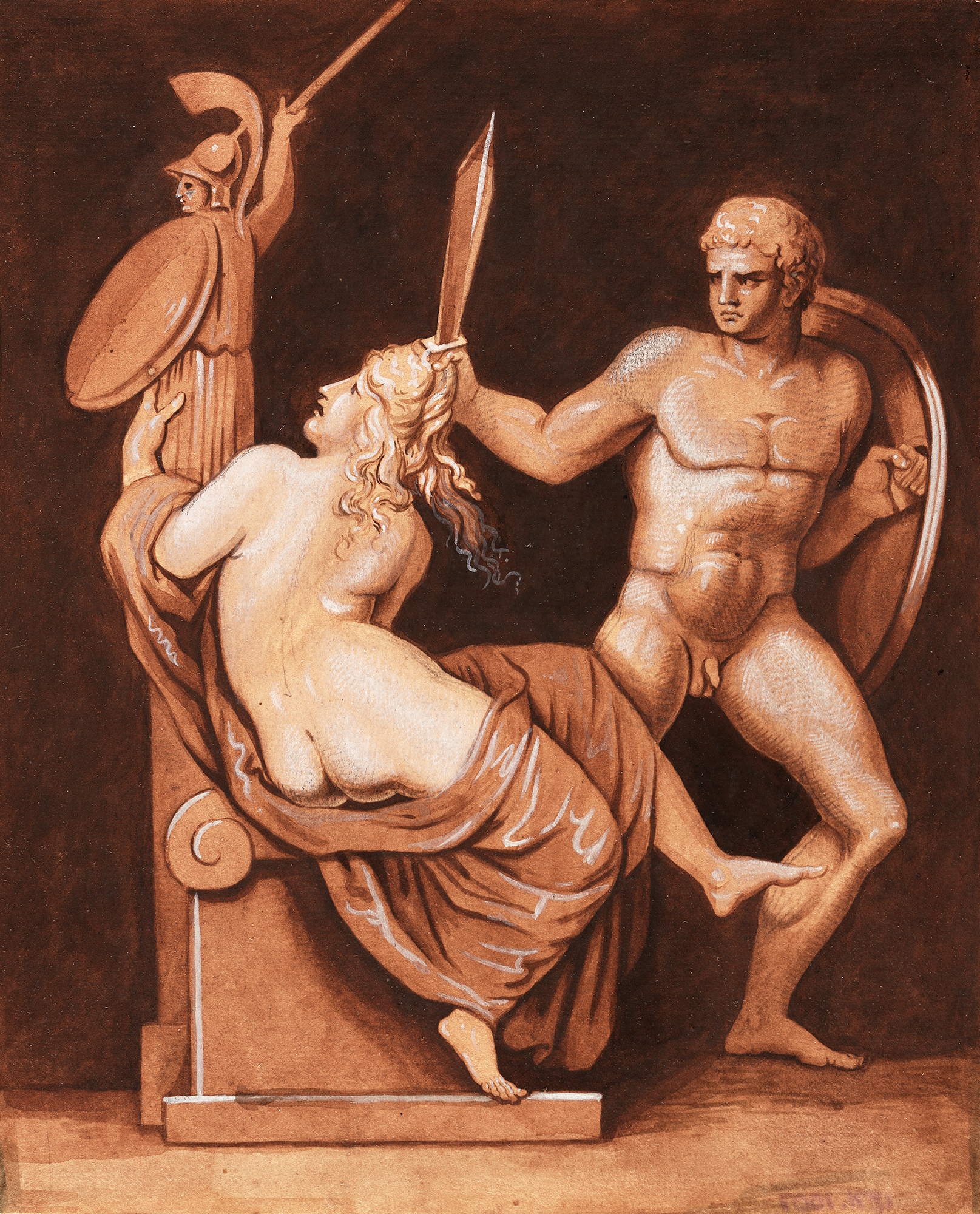 Johann Heinrich Wilhelm Tischbein's Neoclassical version of the story of Cassandra and Ajax shows the renewed attention among artists to ancient sculpture later in the century (above). The stage-like setting, with figures in action against a neutral background, resembles a Roman relief, while the pose of the prophetess Cassandra, who grasps the statue of Athena as Ajax starts to carry her away, is based on the famous sculpture then known as the Letto di Policleto. 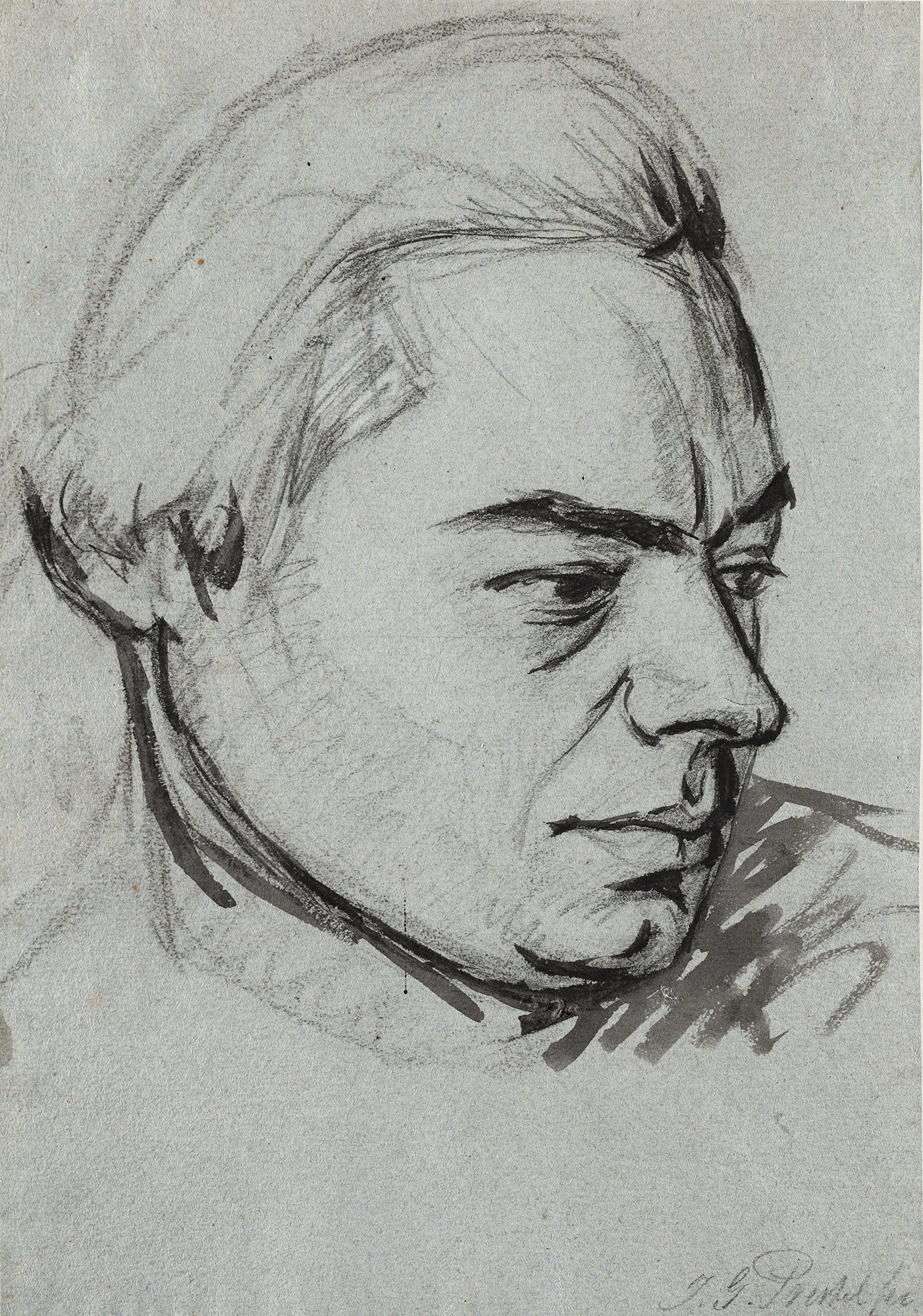 The 18th century was a time of transition, focused on both innovation and tradition. Seemingly quite modern, Johann Gottlieb Prestel’s self-portrait (above) bypasses convention to achieve a direct, unmediated likeness. Well-placed slashes with brush and black ink define the features below his wig, which Prestel delineated first by black chalk lines. Less modern but just as dynamic, Johann Wolfgang Baumgartner's Lazarus and the Rich Man (below) epitomizes the florid Augsburg Rococo with its swooping curves and curlicues. A unique artistic moment specific to this German city, the Augsburg Rococo looked both to the Baroque past and to foreign influences. 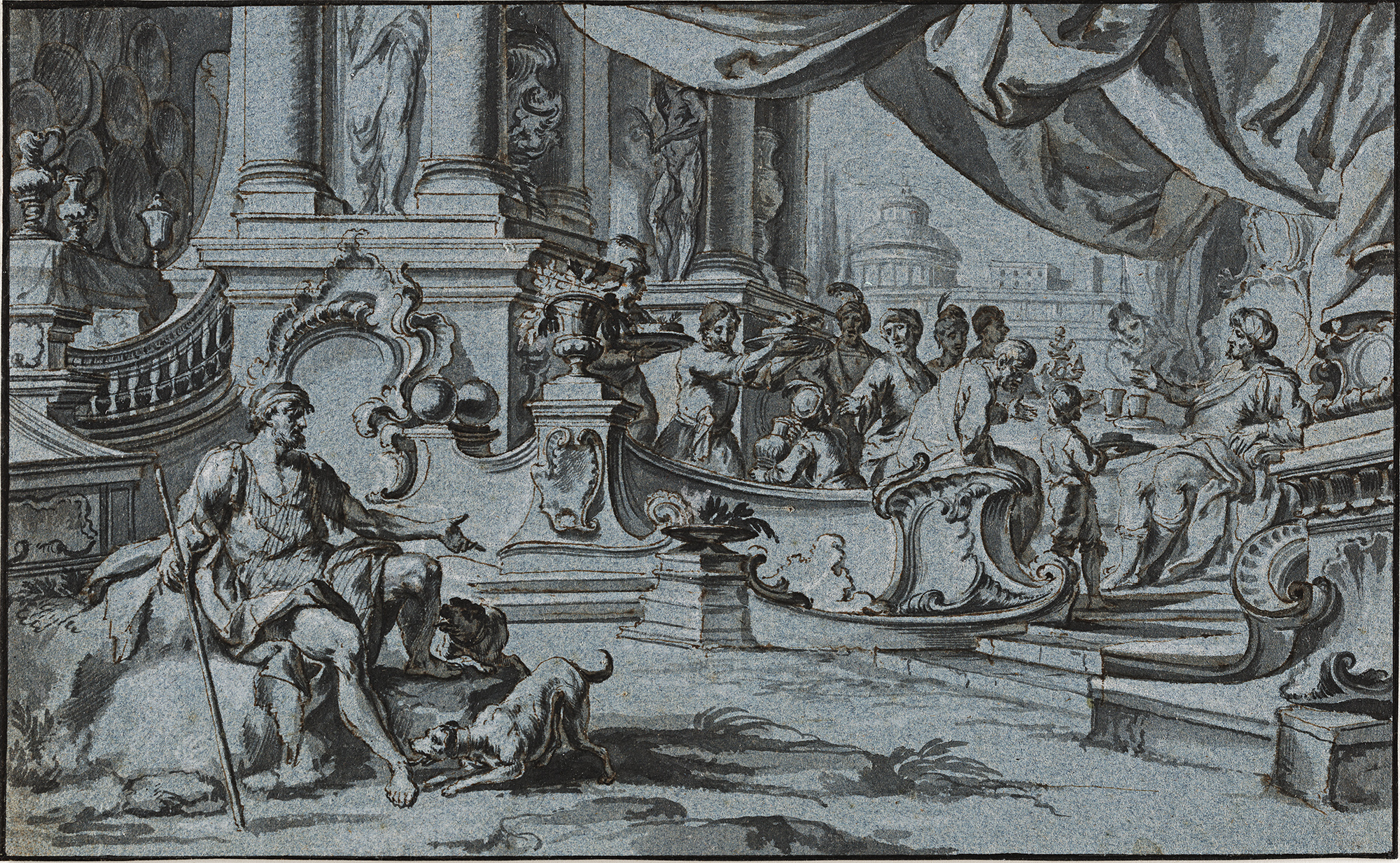 A wide variety of subjects are represented in the show, from the satires of Johann Elias Ridinger and Daniel Chodowiecki to the Classicizing dramas of Anton Raphael Mengs. Landscape artists are especially well represented, including Johann Georg Wille, printmaker to the French King Louis XV, who influenced generations of artists also in the show.

The depth of the collection allows the landscape section to trace schools and influences even in families such as Prestel’s, whose son, wife, and daughter were landscapists. One artist, Christoph Nathe, is represented by four landscapes in four different genres, including this scene near Görlitz (below). With a shepherd resting in a lush, cliff-bound field opening out to a deep vista, it was likely composed in the studio based on previous sketches and the artist’s inventive skills. 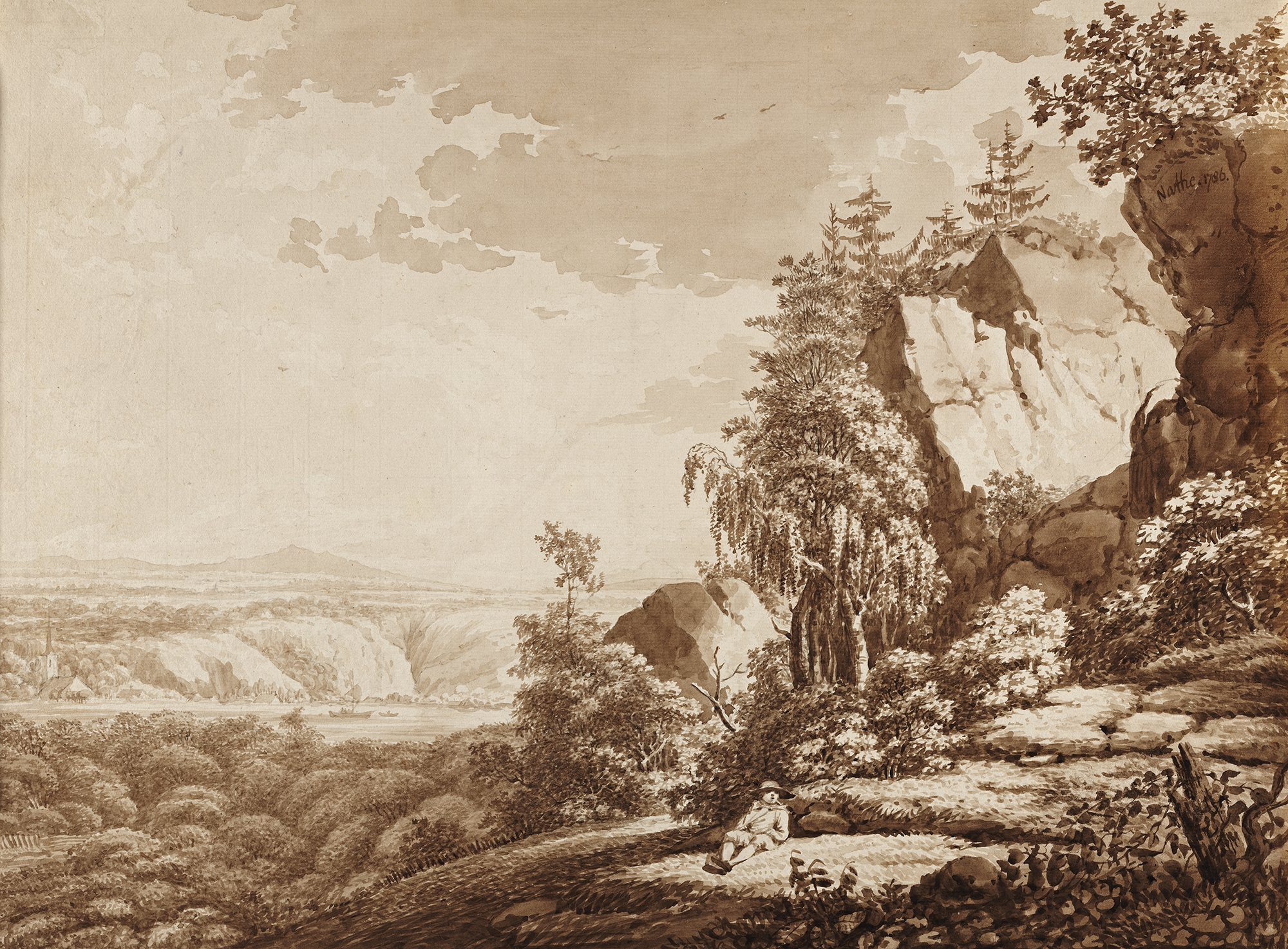 Though many artists specialized in one kind of art — landscapes, narratives, or even animal subjects — other 18th-century German artists worked in many genres. Johann Christian Klengel, for example, who is represented in the exhibition by two independent landscapes and a sketchbook he took on countryside trips, also created intimate domestic scenes such as a family gathered in evening candlelight. Accompanied by a full-color catalogue authored by Crocker curator William Breazeale and the German 18th-century specialist Anke Fröhlich-Schauseil, The Splendor of Germany showcases the wide range of artists, subjects, techniques, and movements during a period of change, when German-speaking lands began their transformation to the states and cultures we know today.

About the author: Trained at the National Gallery of Art, the Metropolitan Museum of Art, and the Philadelphia Museum of Art, Crocker Art Museum Curator William Breazeale is the organizer of many exhibitions including The Language of the Nude: Four Centuries of Drawing the Human Body, A Pioneering Collection:Master Drawings from the Crocker Art Museum, and Reuniting the Masters: European Drawings from West Coast Collections.With a Ph.D. from the University of Maryland and a dissertation on Italian sketchbooks, he is the author of articles for Master Drawings including "Old Masters in Old California:the Origins of the Drawings Collection at the Crocker Art Museum," "Nature and a new drawing by Otto Marseus van Schrieck," and "Two Small Heads by Giulio Romano in the collection of the Crocker Art Museum."In addition to coordinating major exhibition catalogues, he has organized exhibitions on Italian paintings and European and American prints for the Crocker, as well as serving as coordinating curator for many loan exhibitions hosted at the Museum, including 2015's The Age of Albrecht Dürer: German Drawings from the École des Beaux-Arts, Paris.

A Passionate Muse: The Art of Leonard Baskin