"Multiple Horizons: Tribal Perspectives From the Confluence" is presented by the Shingle Springs Band of Miwok Indians’ (SSBMI) Exhibits and Collections Center in collaboration with the Traditional Ecological Knowledge (TEK) department. Featuring contemporary and cultural arts created by SSBMI Tribal Members and regional Native and Indigenous artists, the exhibition highlights the role of TEK and the relationship of the Nissim Pawenan to the Sacramento and American River watersheds. The Exhibits and Collections Center is pleased to share this excerpt from "The Songs and Dances of Denise Davis, Mountain Maidu Artist" by Barbara Benish, a part of the upcoming Multiple Horizons exhibition catalog.

Barbara L. Benish is an artist, curator, writer, and farmer, originally from California. She moved to Prague in 1993 as a Fulbright scholar after working with artists throughout the 1980’s leading to the “velvet revolution” in Czechoslovakia. Benish is Founding Director of ArtMill in rural Bohemia, an international eco-art center, where Denise Davis's "Abalone Dreaming" was recently featured in the Farm-To-Table exhibition during the "Table and Territory Days Festival" for Creative Europe (EU). Benish has been friends with Denise Davis for nearly thirty years, a bond cemented as California-born women living through the political and social changes in the former Czechoslovakia.

The artwork of accomplished Maidu weaver Denise Davis ties intention to form in a way that carries the spirit of her ancestral heritage. Her wide range of artistic expression spans not only the deep traditions of basket-weaving, dancing, and ceremony, but also the Western influences of collage, painting, printmaking, and design. She is an artist of the 21st century, bringing the bloodlines of her 9,000-year-old Indigenous tribal knowledge, as well as her grandfather’s Northern European traditions, to beautiful fruition in outstanding visions of Mother Earth and all that is sacred. She carries on the direct line of Maidu basket weavers, going back to tutelage under her grandmother and Aunties through Lilly Baker, who taught her those same techniques as Aunt Selina Jackson, her grandfather’s sister. 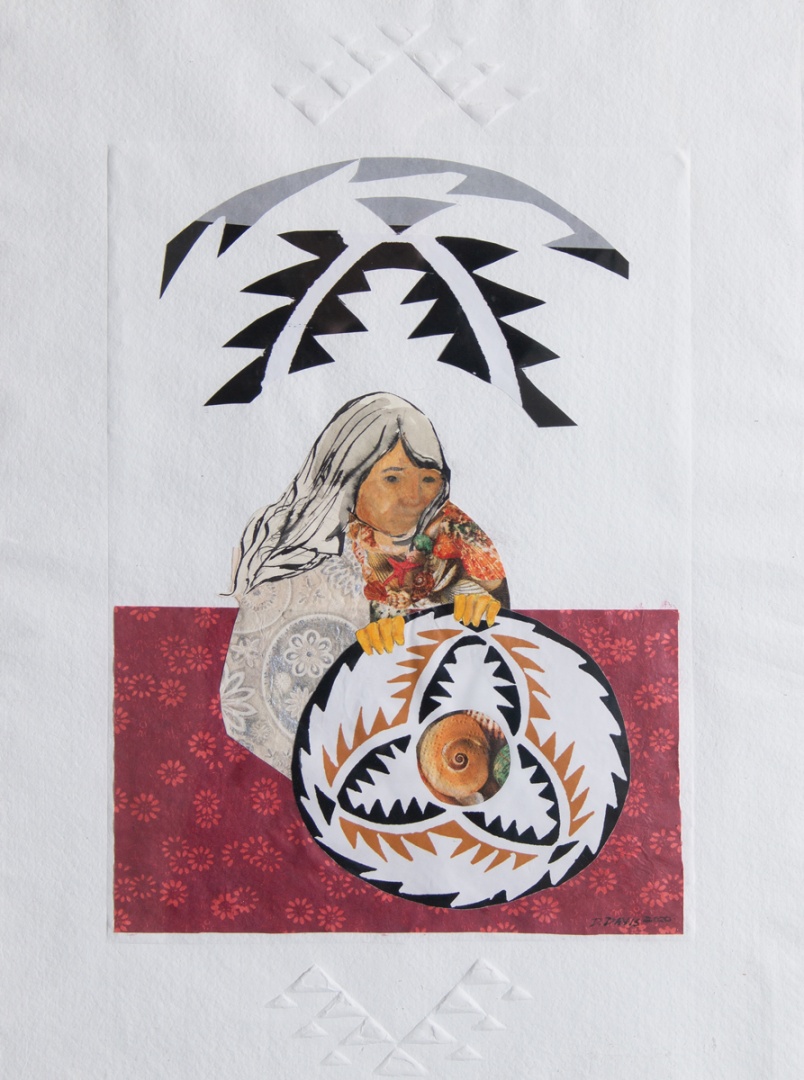 In collages such as Nature Weaving (2020) and Mountain Weaver (2020), the female figure is seated and engaged in weaving moving lines, winding patterns, and spiraling images that are echoed in the basket designs and dances of the Maidu. Davis is also a traditional dancer and credits this practice with informing all of her other art forms.

As a dancer, Davis is privy to the ancient rhythms of song and music that have been passed down for eons in the Maidu way. The practice of ceremony can perhaps best be described as gatherings to celebrate the seasons. These are called Big Times. Whatever terminology we use, the process and practice of ceremony is a connection to the Something Greater, to whom we humans show respect and gratitude for life itself. In this way, Davis’s art is not "only" about object-making, but about connection to the Earth herself, and to spirit. The patterns and waves of design in the collages echo the ridges and triangles of Maidu baskets, which in turn echo the ripples of water on the spring-time rivers or the centipedes and earthworms under the green forest beds. There is a representation of the Cosmos, which is created in space and time connected to place. 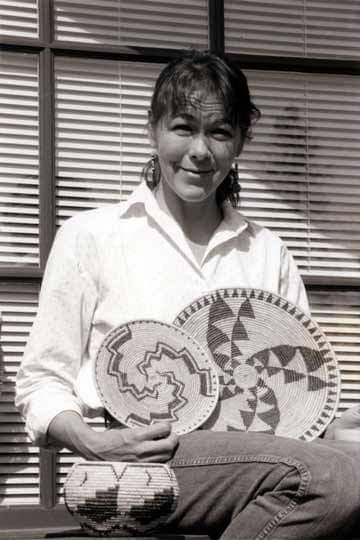 The artist reminisces about her earliest memories with her family in Genesee Valley, at the original Davis ranch, where she spent the weekends up until the age of three or so. Her Danish grandfather would hunt deer with her beloved father, who would then pick her up to come back to town. She held dear two little baskets from her Aunt Selina, hidden under her bed at night, still holding the scents of pom, the California willows in summertime, and adorned with a butterfly design. Davis tells this story as a way to instruct and inform. Those two gift baskets, holding a distant scent of her childhood, were what propelled her to start weaving, years later. And thus, in the act of re-representing the practices of her Maidu traditions, the images of women weavers in these collages are also declarations of life, survival, and healing.

Denise Davis is one of the most respected weavers in the Americas, with a long list of exhibitions, collectors, and public presentations. Her resume spans nearly three decades of activity. In the Native American tradition though, she is perhaps most respected as a teacher, a soon-to-be elder who is passing on the ancient knowledge to the younger generation, dedicated enough to endure the years long process of learning and collecting the stories that make the baskets sing. Her two newest students, Jacky Calanchini and Malissa Tayaba are both Shingle Springs Tribal Members who are working to preserve their land and heritage. Davis’ instruction to these two young women, strong carriers of tradition, is a way to connect past and future. She is one of the California Native artists who are continuing to bridge that gap today. 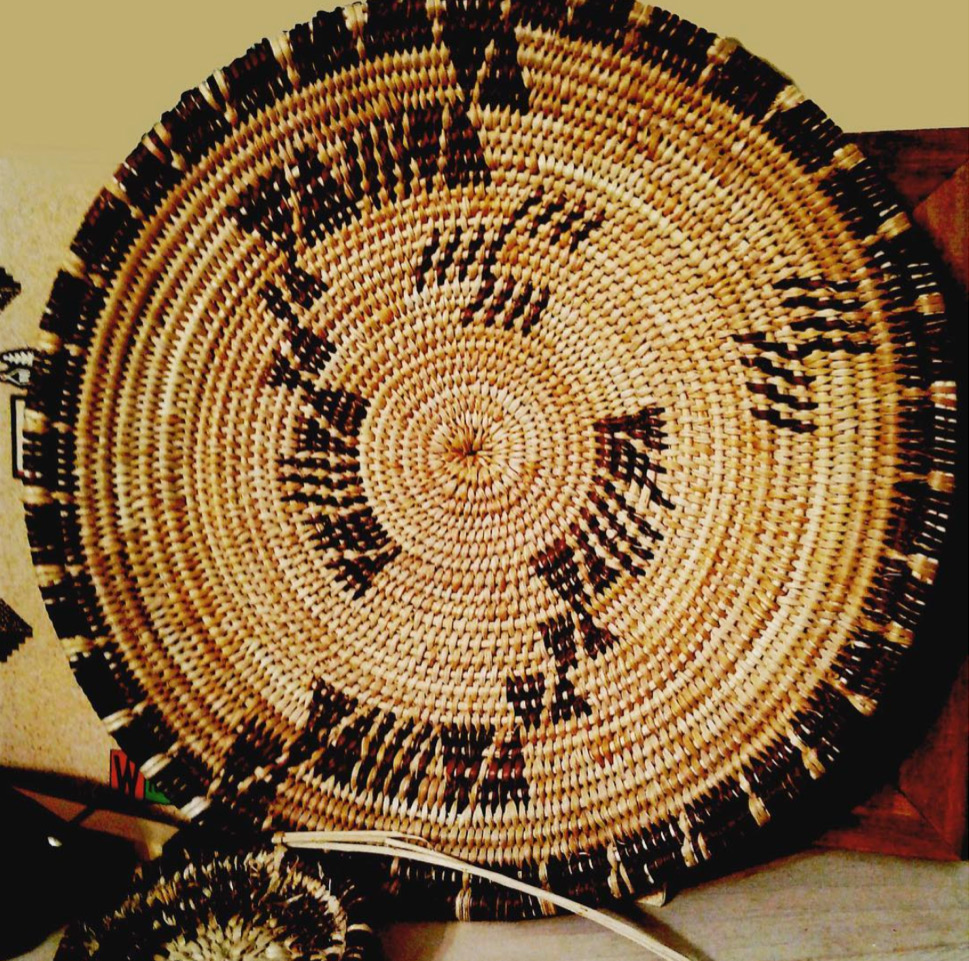 In this way, the artist straddles two worlds, one in California and one in her adopted home of Central Europe , echoing her desire to bring tradition and spirit into the present. Aware of the risk of losing the important knowledge of her tribe, Davis creates artwork that is able to speak to the Indigenous creativity that all humans hold, despite their race or heritage.

So as the artist wanders in the world, far from her home in the Sierra Nevada, she connects contemporary life to the great source from which we come, and eventually, return. Remembering the patterns of her Maidu ancestors, she ties that to her Celtic bloodlines, in designs and knowledge that are not so very different, given the oceans of physical space and time between them. And yet, both ancient cultures celebrate the non-physical world in similar ways and share more similarities than differences.

Gerald Stone’s Vision at the Crossroads