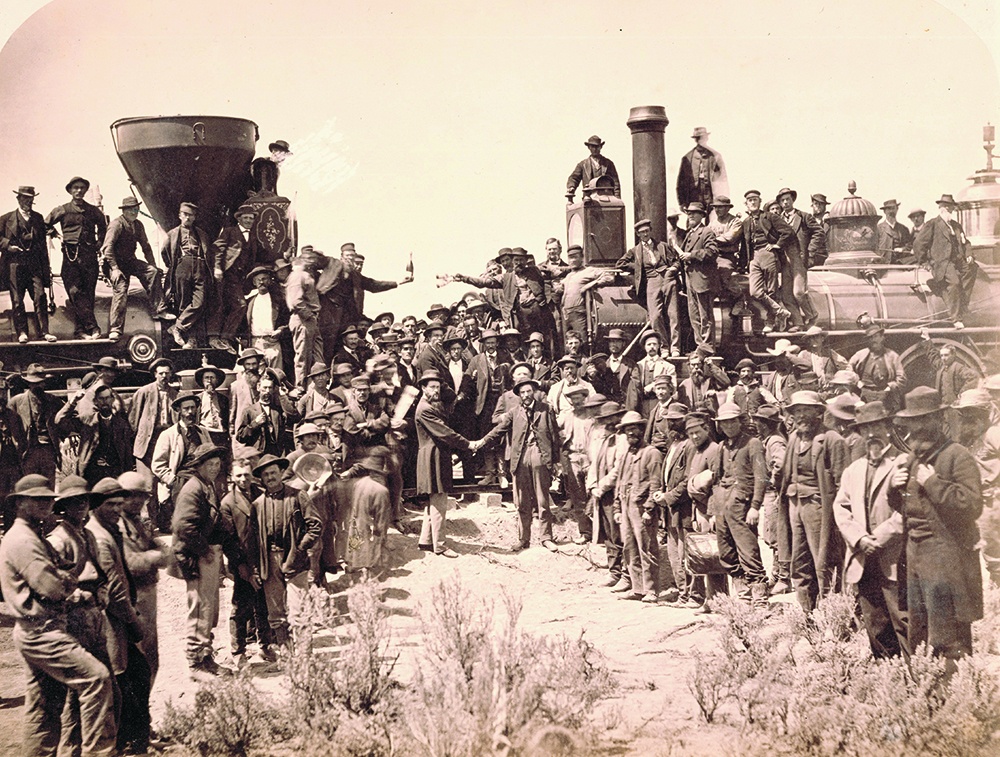 On May 10, 1869, representatives from the Union Pacific and Central Pacific Railroads pounded their last spike and completed the track spanning the North American continent. For the first time, goods and passengers could travel from New York to California quickly and efficiently. The event has special significance to Sacramento, the railroad’s western terminus, and to the Crocker Art Museum, founded by the Central Pacific’s legal counsel, Edwin Bryant Crocker.

The Race to Promontory: The Transcontinental Railroad and the American West celebrates the 150th anniversary of that day in Promontory, Utah, through the work of photographers Andrew Russell and Alfred Hart. Their images recorded construction progress through the Sierra Nevada mountains, the state of Nevada, and Utah by the Central Pacific, as well as the Union Pacific’s push to connect the plains and canyons of Nebraska and Wyoming. Often regarded as documentary work, Russell and Hart’s albumen prints and stereographs are instead carefully selected and meticulously composed works of art.

Andrew Russell’s iconic photograph Engineers at Laying of Last Rail (above) shows a moment of triumph. Two locomotives face each other while crowds of men — standing or clinging to the locomotives, or lined up in front of them — gaze at the camera. The chief engineers of each railroad, who had successfully navigated the challenges of terrain and weather, join hands at the center. Nearly every element of the photograph contributes to the effect, focusing the composition on the historic handshake. To achieve this, however, Russell edited the realities of the place and participants, leaving out, for example, the high desert landscape and the Chinese workers who had laid the last rail for the ceremony.

Originally from New Hampshire, Russell had been a portraitist and landscape painter before becoming a photographer. In 1863 he entered the U.S. Army, and his skills were put to use under Egbert Guy Fowx, who had trained under battlefield photographer Mathew Brady. Russell’s own work for the War Department focused on topography, engineering, and transport, providing intimate knowledge of land and resources to generals and officers as they prepared for battle. These skills were well suited to the Union Pacific’s needs when the company hired him in 1868.

Working from east to west, Russell recorded scenes of depots and supply caravans but also views of great beauty. In Dale Creek Bridge (above) he silhouettes a trestle span against the sky. Taking up nearly the entire width of the photograph, it slopes from right to left to give a sense of forward motion, though the real bridge was level. It was the longest span on the entire Union Pacific.

Russell’s camera celebrated not only the works of engineers but also the works of nature. His view near the Green River in Wyoming (below) shows the wide open canyon landscape he prized. In this example, the viewer's awe at the canyons and mesas is enhanced by the tiny figure on the cliff at center, who contrasts with the enormous scale of the formation he gazes at beyond. 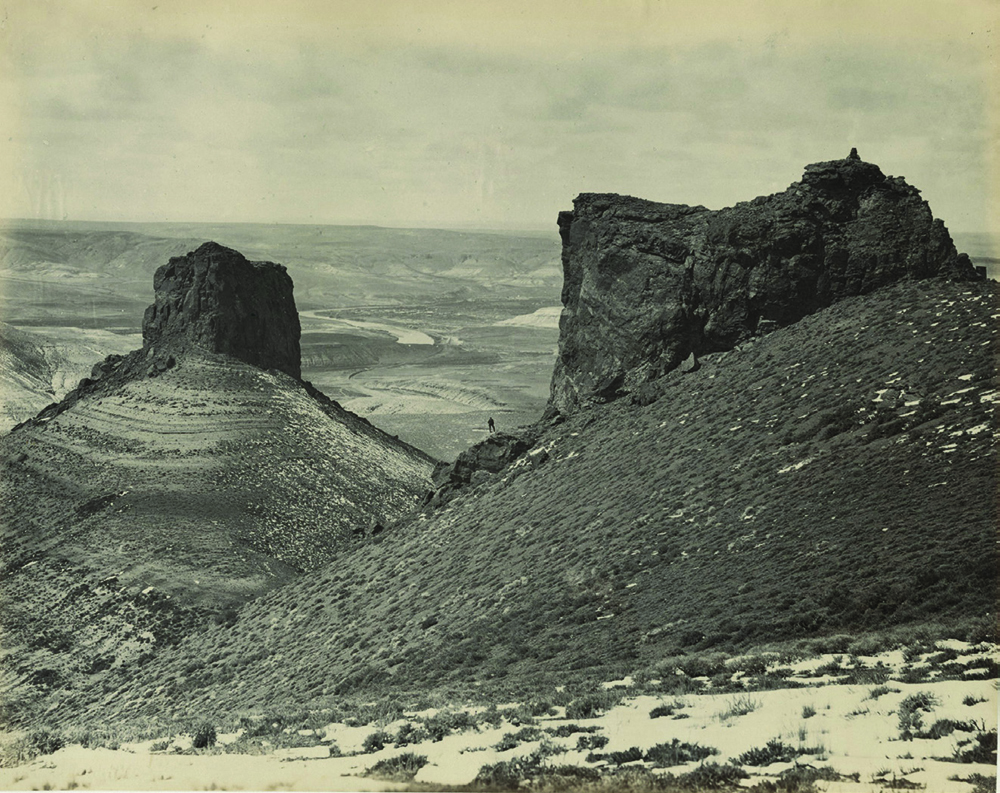 Andrew Russell, On the Mountains of Green River, 1868. Albumen silver print, 9 x 12 in. Collection of the Union Pacific Museum.

Rather than the large-format albumen prints that Russell favored, Alfred Hart preferred stereographs. These smaller, paired images provided an illusion of depth when placed into a viewer. Born in Connecticut, Hart was a portrait painter and daguerrotypist before moving to Cleveland in 1861. By 1863 he had traveled to California, where he worked with the San Francisco studio of Lawrence and Houseworth, photographing mining towns. E. B. Crocker was instrumental in making him the Central Pacific’s photographer in 1865.

Though he also showed the beauty of the land, Hart excelled in capturing the Central Pacific’s hard-won progress over the Sierra Nevada. Alongside feats of engineering, such as trestles and tunnels, he created action shots (below). Seemingly a view atop a careening locomotive, Hart’s scene of Valley Fork North of Yuba, Emigrant Gap was in fact taken on a still train with colleagues posed in the engineer’s compartment. Such views were sent to Collis Huntington in New York to whet the appetite of investors, so the artist was careful not to include too many scenes of the deep snows so as not to dissuade their support. 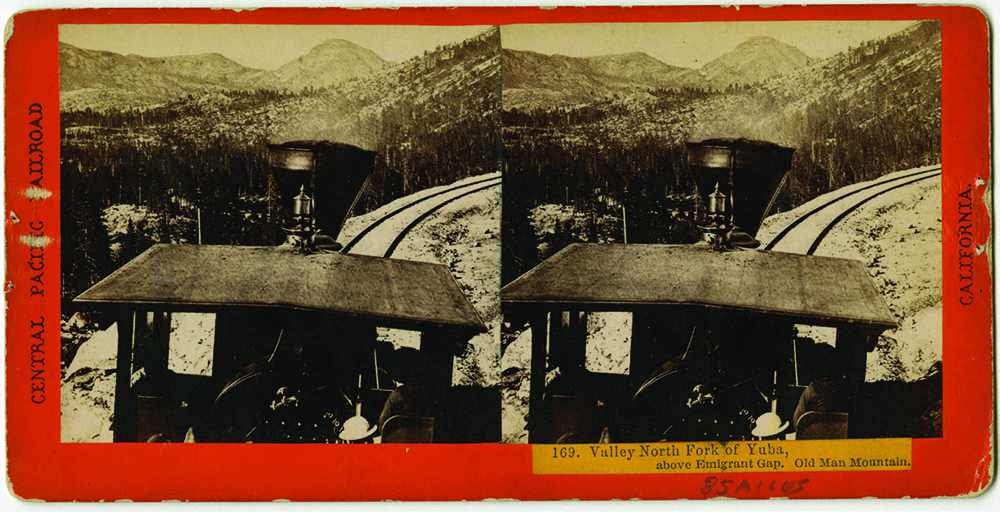 Other views by Hart were more focused on aesthetics. The strangely beautiful abstraction showing the frame of a weather shed (below) seems to recede into an infinite distance when placed in the stereograph viewer. Given the railroad’s halting progress over the mountains, Hart’s technical skill as a photographer must have gone far to preserve the railroad investors’ excitement.

In addition to their beauty, Russell’s and Hart’s photographs are essential to our understanding of American history. Though often selective, they tell the story of a historic accomplishment 150 years ago. By examining this record not only as documentation but also as purposeful works of art, this exhibition provides context and nuance to the story of the transcontinental railroad.

The Race to Promontory: The Transcontinental Railroad and the American West will be on view at the Crocker Art Museum in Sacramento, California, from June 23 until September 29, 2019.