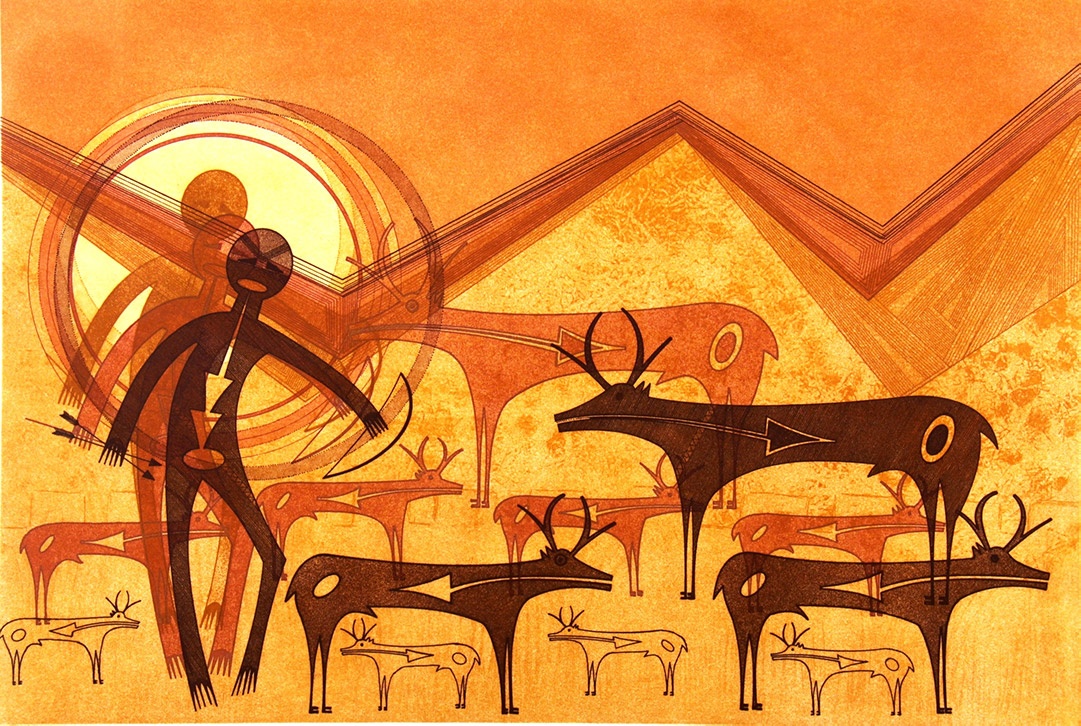 Artist Helen Hardin of Santa Clara Pueblo in New Mexico (Tewa name: Tsa-sah-wee-eh, or “Little Standing Spruce,” 1943–1984) emerged in the 1970s and 1980s as a trailblazing example for Native American artists wishing to break from tradition.

Born and having spent her early childhood at Santa Clara with her mother’s family, Hardin spent much of the rest of her life in and around Albuquerque. Her work is informed by time-honored pueblo imagery as well as the art of her mother, the renowned Pablita Velarde (1918–2006). And yet, Hardin’s art departed radically from both influences. Whereas Velarde rendered traditional Native American scenes, Hardin created abstractions of traditions. As Hardin told an interviewer in 1984, “I don’t want to be doing anything that is not completely mine.”

Hardin’s father, Herbert Hardin, was an Anglo-American government employee. Hardin and Velarde divorced when Helen was 13, and Helen was subsequently raised by her mother. Throughout her life, Hardin was faced with cultural challenges created by having a mixed-race background, and she often felt the dualism of living in both worlds.

According to the laws and traditions of that time, Hardin was rejected by the Santa Clara Pueblo elders and forbidden to partake in the traditions of her mother’s culture. She also experienced art-world opposition to the fact that she was both a Native artist and a woman. 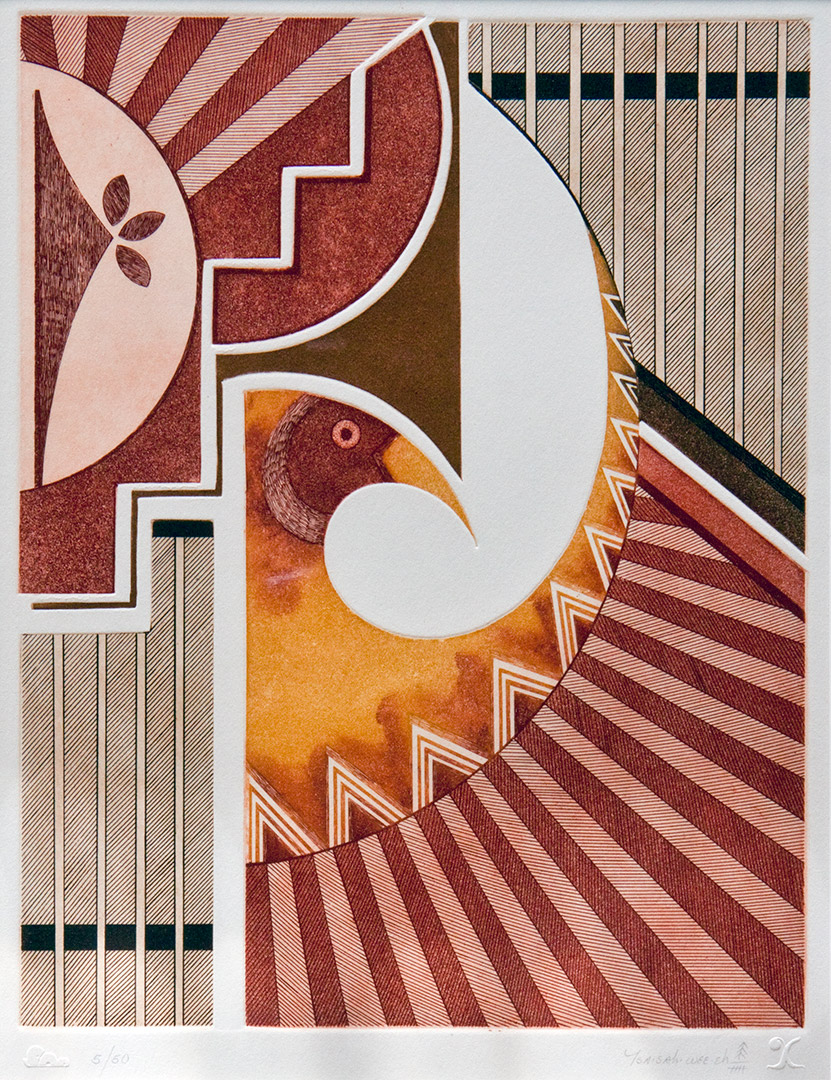 Hardin was also ever conscious of being in the shadow of her successful mother and sought to distinguish herself creatively. She attended a Catholic high school and took a course in drafting — at the time offered just to boys — and from then on used drafting tools in her art. She then attended the University of New Mexico in Albuquerque, spending a year taking art history and anthropology classes before dropping out. She also took weaving and textile design at the University of Arizona. In 1962, she held her first one-woman show at Coronado Historic Site near Albuquerque.

In 1964, Hardin gave birth to a daughter, Margarete Bagshaw (1964– 2015), who, like her mother and grandmother, would go on to become a respected artist. Four years later, Hardin moved to her father’s home in Bogotá, Colombia. She went to reconnect with him, distance herself from Santa Clara Pueblo and her mother’s influence, and escape Margarete’s abusive father. Working in relative isolation, she became more experimental, and when she returned to Albuquerque six months later, she brought with her a new style, one that combined abstractions of imagery from her pueblo heritage with a personal approach to historic motifs that evidenced her knowledge of art history as well as the relevance of contemporary times. Changing Woman from her Women’s Series, for instance, acknowledges Hardin’s quiet feminism, just as the series has broadly been read as an autobiography of the last three years of her life.

Hardin departed from the more traditional “flat style” often used by Native American artists, including her mother, seeking in her own work greater three-dimensionality and, often, translucent effects. She also used vibrant colors, spattering techniques, and metallic paint. At times, her work drew criticism from tribal members, who expressed concern that her mystical figures too closely resembled sacred kachinas, though Hardin was careful to always invent her own. “This is my language,” she explained, “This is how I’m going to talk.” 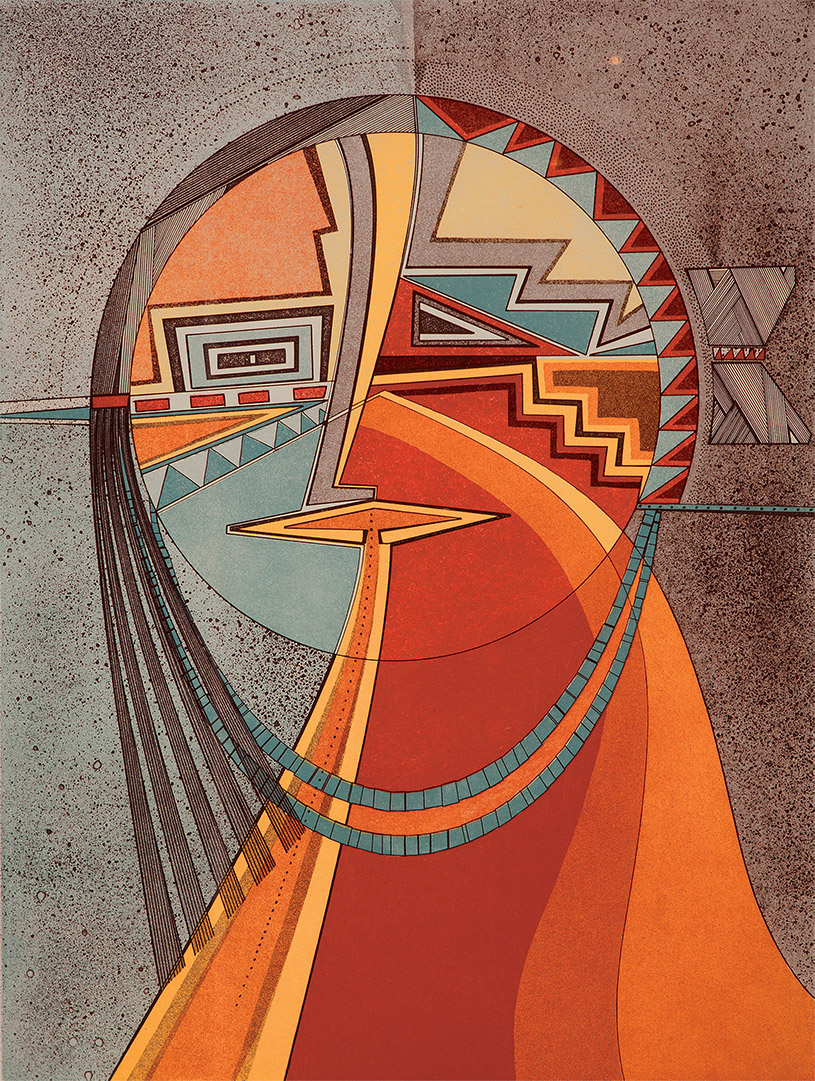 Hardin ultimately became recognized both as a printmaker and a painter. In 1980, she started to make copperplate etchings. This process allowed her to create precise and detailed compositions in multiples that could reach a broad audience. After she was diagnosed with breast cancer in 1981, she continued to produce art, working until her death at age 41.

Spirit Lines consists of Hardin’s copper-plate etchings plus an important group of privately held original paintings. At the Crocker, these works will be accompanied by paintings by Pablita Velarde, who, like her daughter, departed from convention (pottery-making) and broke with precedent to paint narratives of pueblo life. Works by Bagshaw are also included. Bagshaw’s paintings, like her mother’s, are vibrant, abstract, and feature Native American iconography. And, just like her mother before her, she pushed beyond the limits of the previous generation to create an art recognizably her own.

Scott A. Shields, Associate Director and Chief Curator at the Crocker Art Museum, holds an MA and PhD in art history from the University of Kansas. He has twenty-five years of museum experience in the Midwest and California. Having curated more than seventy-five exhibitions, he has been the primary or sole author of numerous exhibition catalogues, including Artists at Continent’s End: The Monterey Peninsula Art Colony, 1875–1907; Edgar Payne: The Scenic Journey; A Touch of Blue: Landscapes by Gregory Kondos; Armin Hansen: The Artful Voyage; David Ligare: California Classicist; E. Charlton Fortune: The Colorful Spirit; Richard Diebenkorn: Beginnings, 1942–1955; and Granville Redmond: The Eloquent Palette.