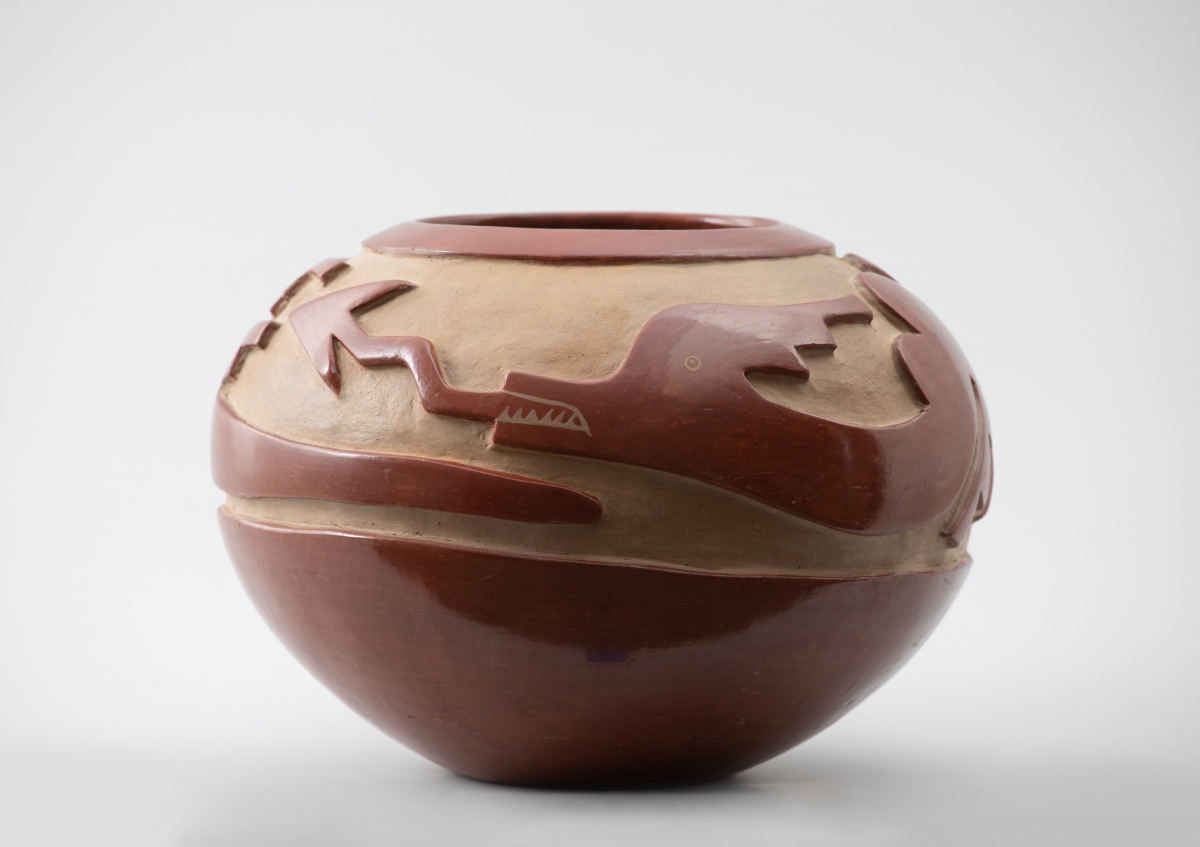 American Indians of the Southwest began making functional pottery at least 2,000 years ago. The skills needed to make these vessels passed from generation to generation, a tradition that continues to this day. Geographic variations in clay, along with regional preferences for certain designs and shapes, meant that distinct styles became associated with permanent villages, which the Spanish called pueblos.

When the railroad brought visitors to the Southwest in the late 19th century, potters responded by selling their wares, and an ongoing market became established for pottery made as art. For the first time, many makers began to sign their work, and individual potters became known and their works collected. These artists drew inspiration from their ancestors and built upon their traditions.

Pueblo Dynasties: Master Potters from Matriarchs to Contemporaries features some 200 ceramic vessels and sculptures by premier pueblo potters of New Mexico and Arizona. The exhibition focuses on the legendary matriarchs and their artistically adventuresome descendants, whose works have become increasingly elaborate, detailed, personal, and even political over time.

This exhibition is one of two shows at the Crocker this fall exploring the art and culture of several distinct Native American communities. When I Remember I See Red: American Indian Art and Activism in California features contemporary art by First Californians and other American Indian artists with strong ties to the state. Spanning the past five decades, the exhibition includes more than 65 works in various media from more than 40 artists. On view October 20, 2019 — January 26, 2020. 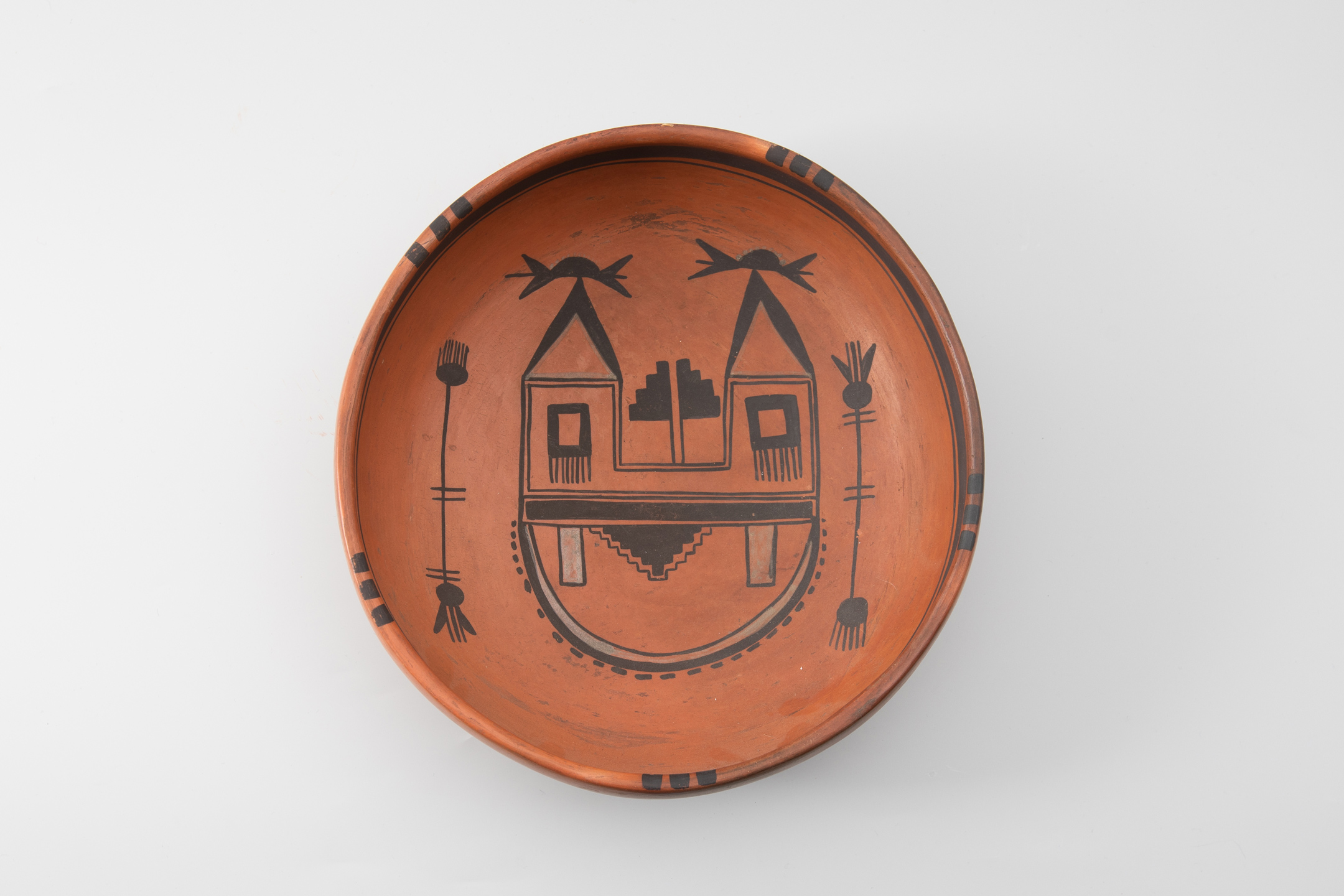 The most illustrious line of Hopi-Tewa potters began with Nampeyo (c. 1856–1942), who was born on First Mesa in Hano, or Tewa Village, on the Hopi reservation in northeastern Arizona. Nampeyo learned the fundamentals of pottery-making from her paternal grandmother, who was Hopi, and her mother, a Tewa.

After seeing numerous prehistoric pieces excavated from the village of Sikyátki by anthropologist Jesse Fewkes in 1895, Nampeyo began to adapt old designs to her own pots and, in so doing, garnered a reputation. By selling these pieces to traders, who distributed them widely, and by teaching others in her village her techniques, she started the Sikyátki Revival, which continues to this day. Nampeyo did not sign her pieces as the practice was traditionally viewed as giving too much focus to an individual, but her daughters and descendants did.

When Nampeyo began to lose her sight in 1920, she continued to make coiled pots but relied on her three daughters, Annie Healing Nampeyo (1884–1968), Nellie Nampeyo Douma (1896–1978), and Fannie Polacca Nampeyo (1900–1987), to decorate and fire them. They, in turn, passed the skills to their children. Pueblo Dynasties includes numerous examples by the senior Nampeyo and her children, grandchildren, great-grandchildren, and great-great-grandchildren, who are collectively renowned for their finely wrought polychrome (multi-colored) designs, which are founded in tradition and then individually interpreted by each potter. 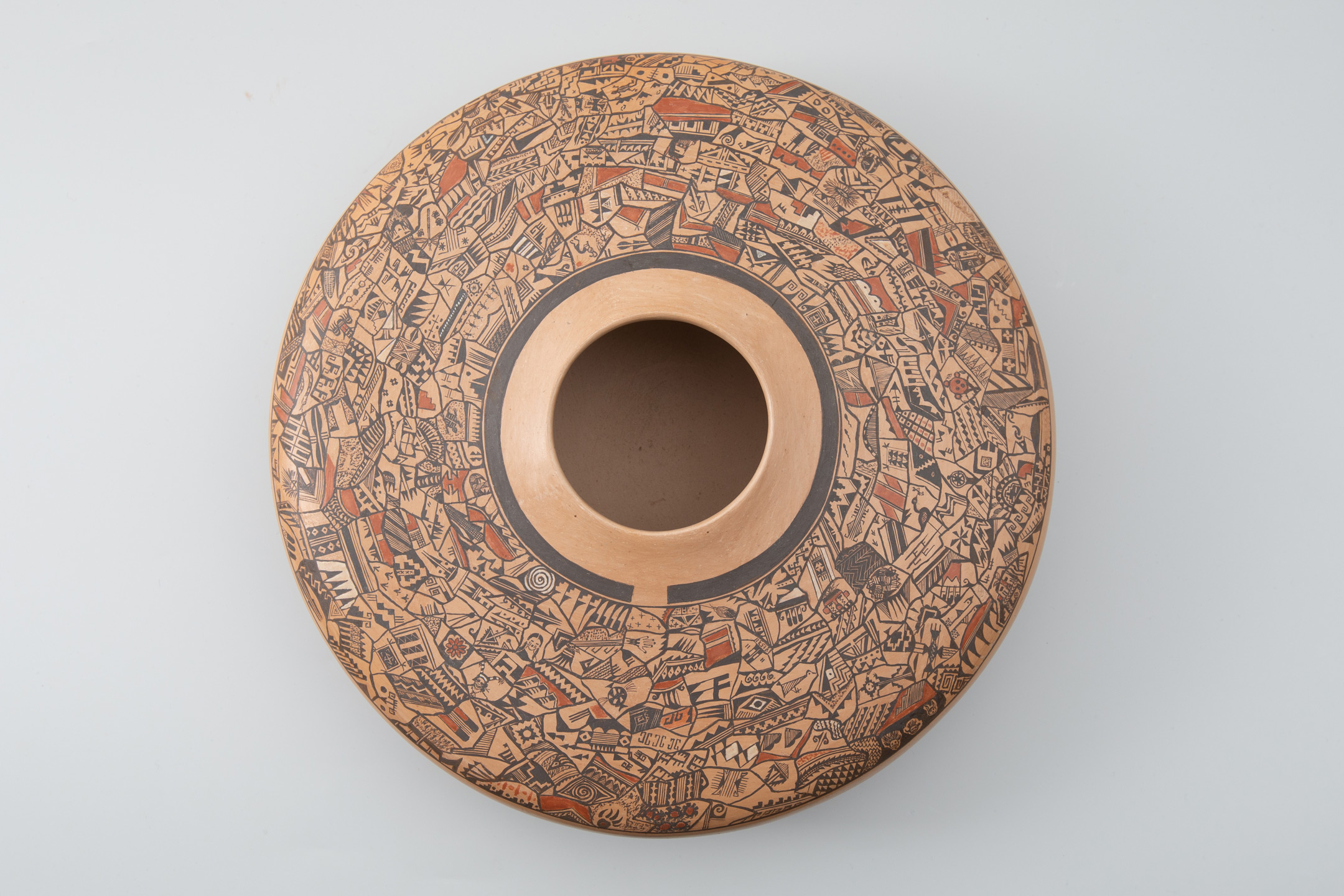 The collection is especially strong in descendants of Annie Healing, who taught pottery traditions to her daughter Rachel Namingha Nampeyo (1903–1985), who then shared her skills with Dextra Quotskuyva Nampeyo (born 1928). Dextra, an important mentor to other potters and artists, is represented by a large and elaborate vessel ornamented with depictions of pottery sherds. Her daughter, Hisi Quotskuyva Nampeyo (born 1964), is also a potter, and her son, Dan Namingha (born 1950), is a painter and sculptor. Several of their first cousins are talented ceramists, two of the most significant being Steve Lucas (born 1955) and Les Namingha (born 1968), both of whom learned from Dextra and today make work with traditional and non-traditional designs and colors.


Other Hopi-Tewa potters included in the exhibition are Paqua Naha (called Frog Woman, c. 1890–1955), who near the end of her life developed a white-ware style that her daughter, Joy Navasie (second Frog Woman, 1919–2012), popularized. The potter Grace Chapella (1874–1980) learned her skills from her mother and, significantly, her neighbor Nampeyo. As with Nampeyo, she derived motifs from historic sherds and is most recognized for her butterfly or moth designs, which became inextricably identified with the Chapella family. Rendina Huma (born 1947), who grew up in the Hopi village of Polacca, is one of the most famous contemporary potters to appropriate Sikyátki sherd designs, turning them into geometric patterns of extraordinary complexity. 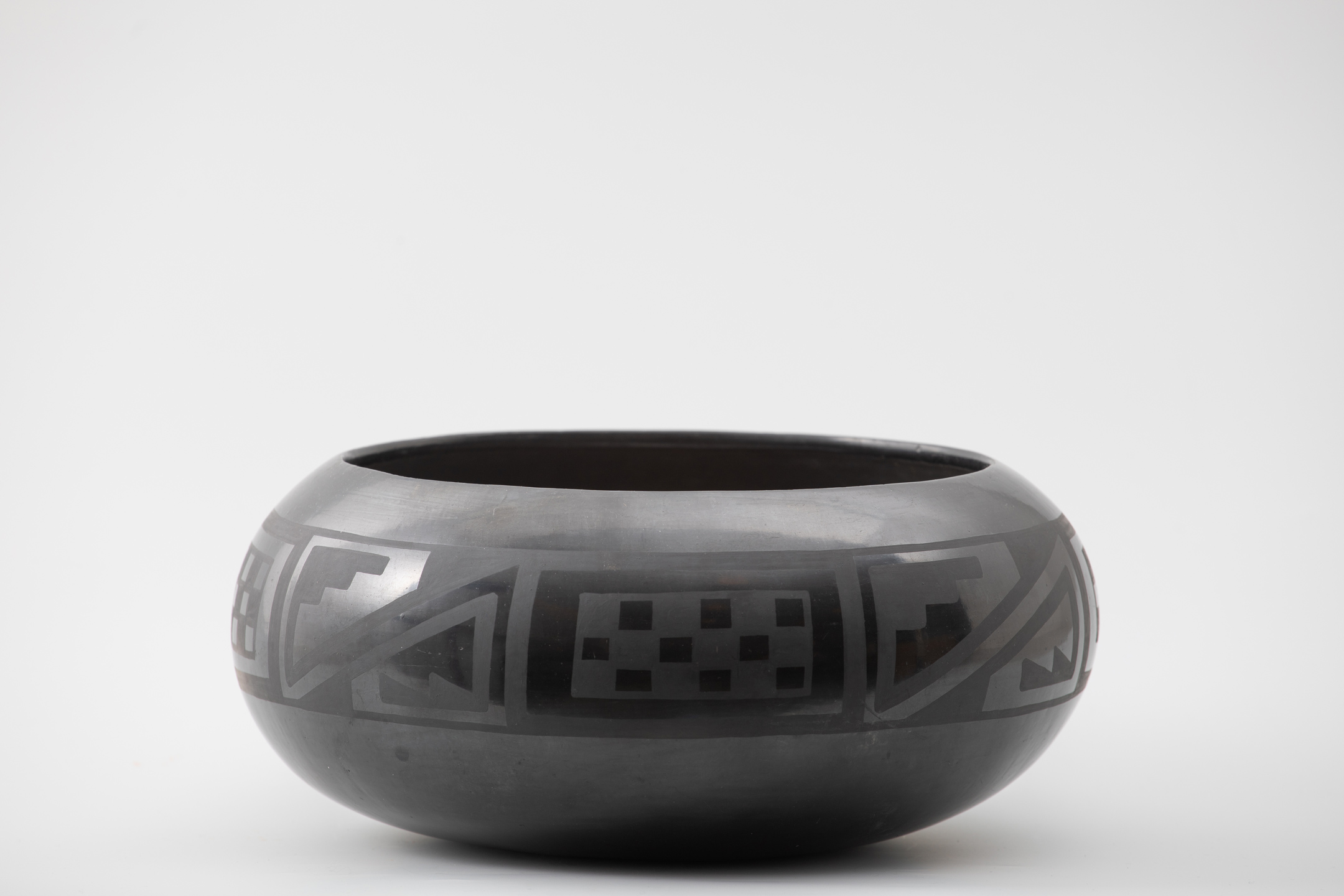 San Ildefonso potters north of Santa Fe are celebrated for their elegant black-on-black pottery, though they too produced — and continue to make — polychrome ware. Maria Montoya Martinez (1887–1980) popularized the black-ware style, which was widely exhibited across the country and sold well to buyers in the Southwest and beyond. Martinez’s earliest pieces, however, were polychromes, as were those made by her uncle and aunt, Florentino Montoya (1858–1918) and Martina Vigil (1856–1916), who taught her.

Dra Gachupin (born 1939) used combinations of black and brown clay and inset turquoise or coral. She was born at Zia Pueblo and learned pottery first from her mother, Candelaria Gachupin (1908–1997). She broadened her skills under the tutelage of Rose Gonzales (1900–1989) of San Ildefonso, after she married Gonzales’s son, the potter Tse-Pe Gonzales (1940–2000). Rose Gonzales was the innovator of carved pottery at San Ildefonso, having discovered the tradition on an ancient sherd. She passed her knowledge to Dora and Tse-Pe. 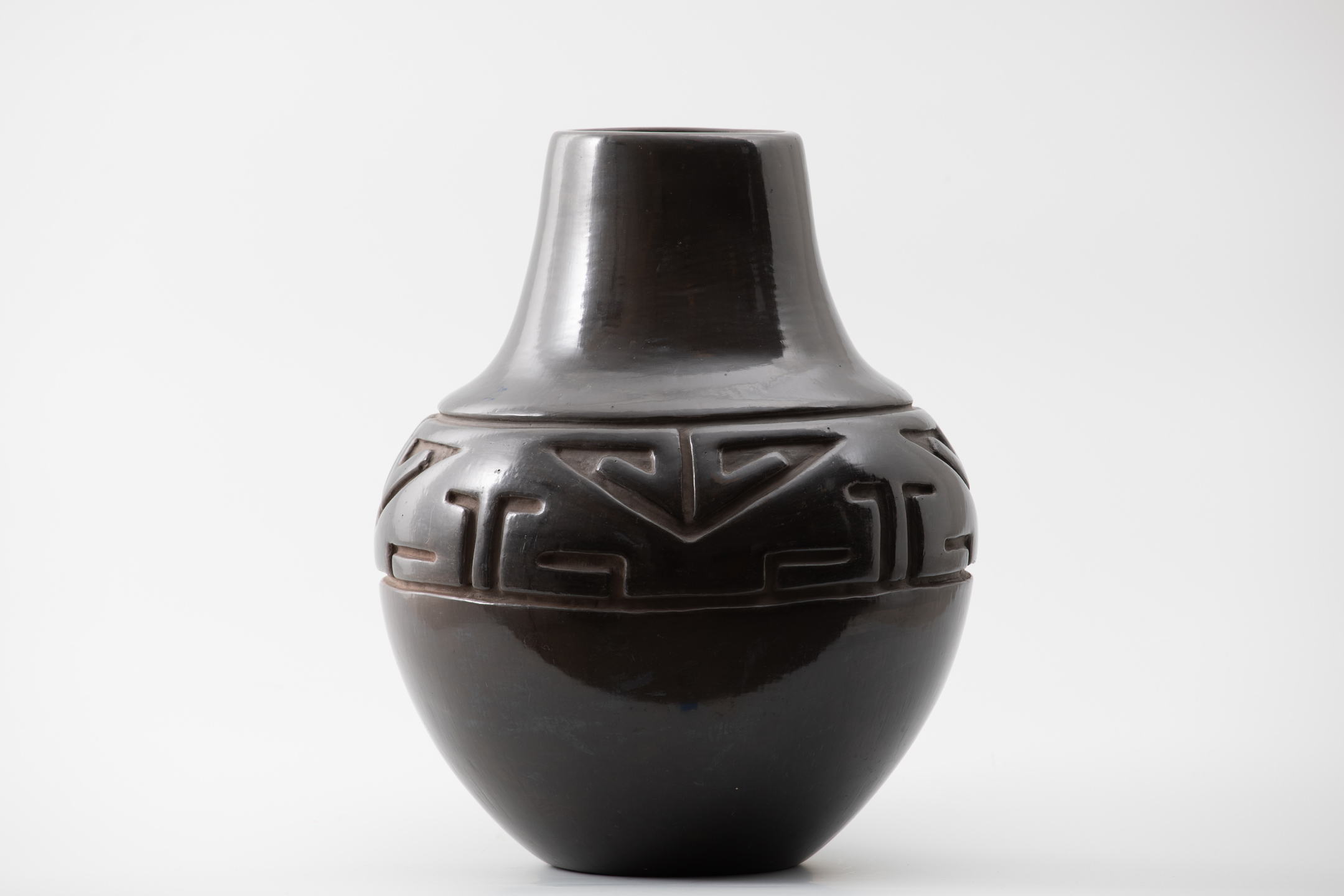 Deeply carved pottery is, however, primarily associated with Santa Clara Pueblo potters, located northwest of Santa Fe. There, Sara Fina Tafoya (c. 1863–1949) started a family line that includes many of today’s most respected makers. Tafoya is known for large, elegant storage jars, most of which are undecorated, though some of her pieces include scalloped rims and impressed or carved designs. Her talents continued through three of her children: Christina Naranjo (1891–1980), Camilio Tafoya (1902–1995), and Margaret Tafoya (1904–2001), all of whom practiced a style of deep carving that established the family’s recognizable aesthetic. A vase by Margaret Tafoya was fired and smothered with animal manure to restrict oxygen, creating a signature glossy black. Christina Naranjo’s vessel with a carved Awanyu, the guardian of water, was open-fired to a deep red hue.


There are now dozens of Tafoya family descendants. Christina Naranjo’s daughter Mary Cain (1915–2010) and granddaughter Linda Cain (born 1949) followed in her footsteps, just two among many of her children, grandchildren, and great-grandchildren to work in clay. Linda Cain’s daughters, Naranjo’s great-granddaughters, are the esteemed sisters Autumn Borts-Medlock (born 1967) and Tammy Garcia (born 1969), the latter represented in Pueblo Dynasties by a vessel with an unusual Pacific Northwest bear design. 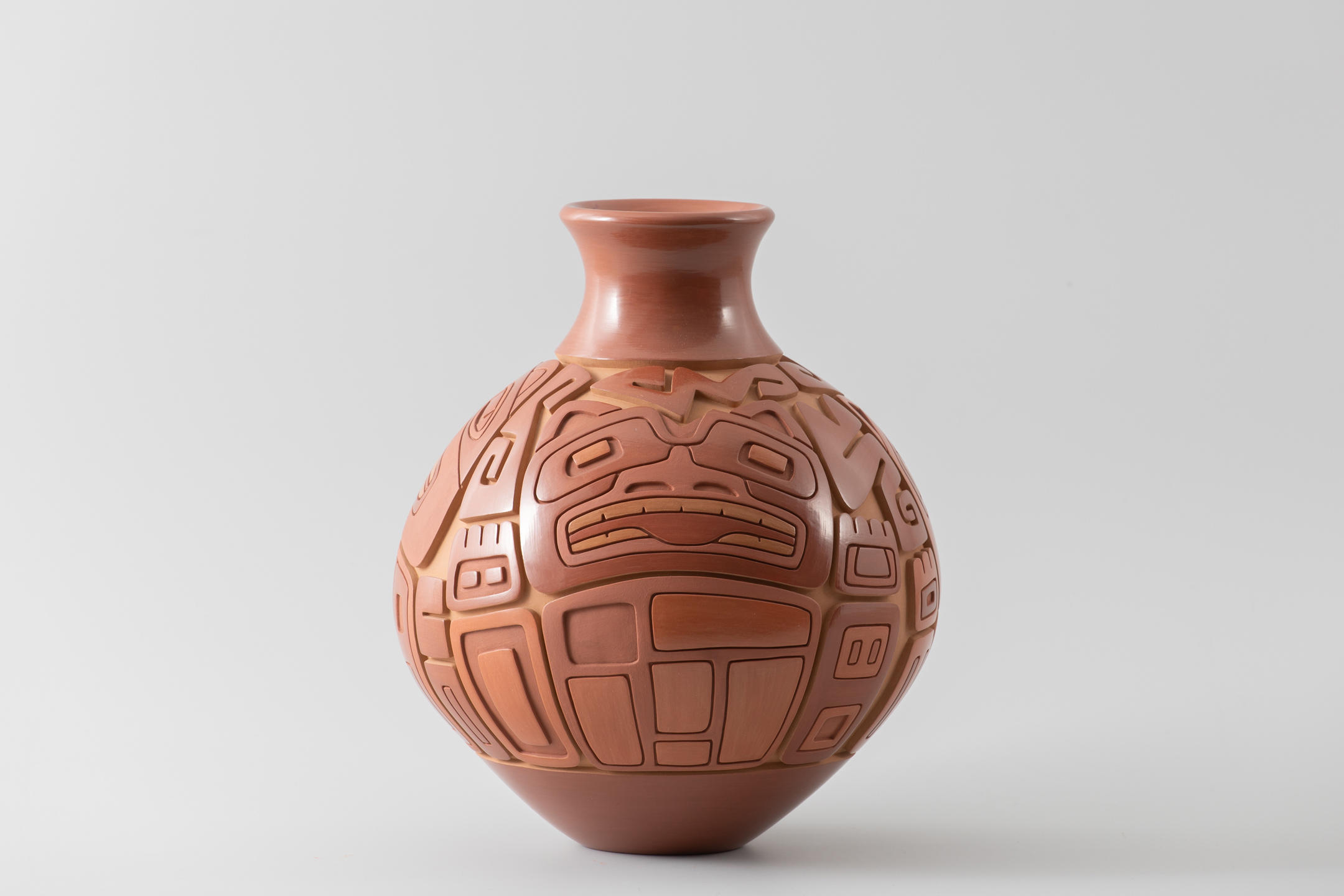 Other families from Santa Clara, such as the Duwyenies, also use micaceous clay. Preston Duwyenie (born 1951) is Hopi but now lives at Santa Clara with his wife Debra (born 1955). The couple work separately and in collaboration. Preston, who taught ceramics for many years at the Institute of American Indian Art in Santa Fe, is known for his simple, modernist forms that frequently incorporate elements of silver inlay. Debra makes smaller, exquisite work carved with low-relief flora and fauna, which she creates by polishing the surface of her plates and vessels before scraping away the background to reveal intricate designs.

Helen Shupla (1928–1985) popularized the melon-jar form, pushing her signature ribs from the inside out as she coiled the vessel. An example in Pueblo Dynasties is unusual in its deep rose color [fig. 16]. Shupla’s son-in-law, Alton Komalestewa (born 1959), is Hopi-Tewa — also a descendant of Nampeyo — though he continues to expand upon Shupla’s melon jars and produce other forms associated with Santa Clara. 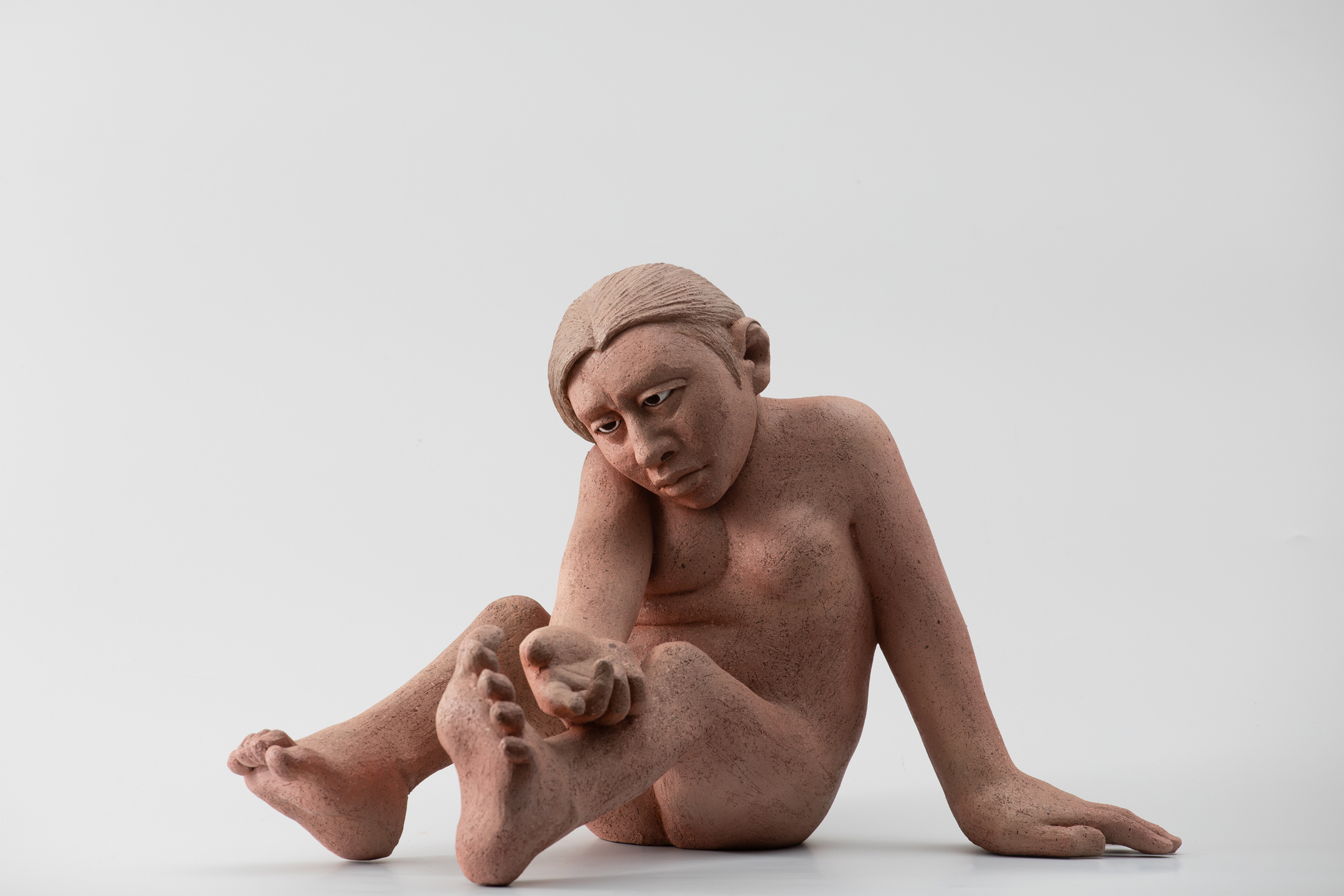 Known for vessels with stylized animal motifs and, sometimes, political commentary, Santa Clara Pueblo potter Jody Folwell (born 1942) pushes aesthetic and thematic boundaries, as does her daughter Susan Folwell (born 1970) and nieces Roxanne Swentzell (born 1962) and Jody Naranjo (born 1969), all of whom extend and challenge traditions. Naranjo’s pots are made using traditional methods — digging clay, processing it, using coils to build forms, and pit firing — while her painted and carved decorations are decidedly contemporary. She is best known for her stylized “pueblo girls,” one ambitious vessel featuring 194 of them, each holding different types of pottery. Swentzell, in turn, uses clay to make figurative sculpture, most often of women, the pieces ranging from poignantly introspective to humorous. The coarse clay used in Looking for Root Rot indicates that the piece was made while the artist was living in Hawaii. The figure’s expression suggests longing, and the title conveys the artist’s fear of losing her identity in a place so far from home.

Like those before them, today’s artists continue to draw inspiration from their ancestors and build upon established traditions. New generations of potters will, no doubt, be equally innovative, and, perhaps establish new dynasties of their own.