Now on view! "Becoming a Woman in the Age of Enlightenment: French Art from The Horvitz Collection"


In 18th-century France, debate raged among enlightened minds about the role of women in society. Were they to devote themselves to the domestic realm, join the marketplace and public life, or find another way to define themselves? This debate, known as the Querelle des Femmes, or "Woman Question," was one of the most contentious and absorbing during the Enlightenment, an age when rational thought, expressed in language, science, and philosophy began to challenge tradition and question faith as a way of understanding the world. The querelle proposed many overlapping, intersecting roles for women, foreshadowing the 20th-century philosopher Simone de Beauvoir's words: "One is not born, but becomes a woman."

This exhibition, with more than 120 works from the greatest private collection of French art in the United States, is the first to focus on the Querelle des Femmes and that process of "becoming." Paintings, drawings, and sculpture by renowned 18th-century artists such as Antoine Watteau, François Boucher, and Jean-Honoré Fragonard, as well as the lesser-known Le Prince, Cochin, Moitte, and others, trace the stages of women's lives in a society very different from our own. Social restrictions, historical and literary role models, conventions of courting and marriage, the responsibilities of motherhood, and the sacrifices inherent in work and public life, all shaped French 18th-century women as they navigated the sometimes turbulent society that surrounded them. For many, an integral step toward "becoming a woman" was becoming a wife. In a world in which women's own power was limited, it was difficult for them to own property, and political offices did not exist; the best way to gain control over one's destiny was often to choose the right husband. Until they entered the security of marriage, young womens' lives were governed by the pressures of the marriage market. 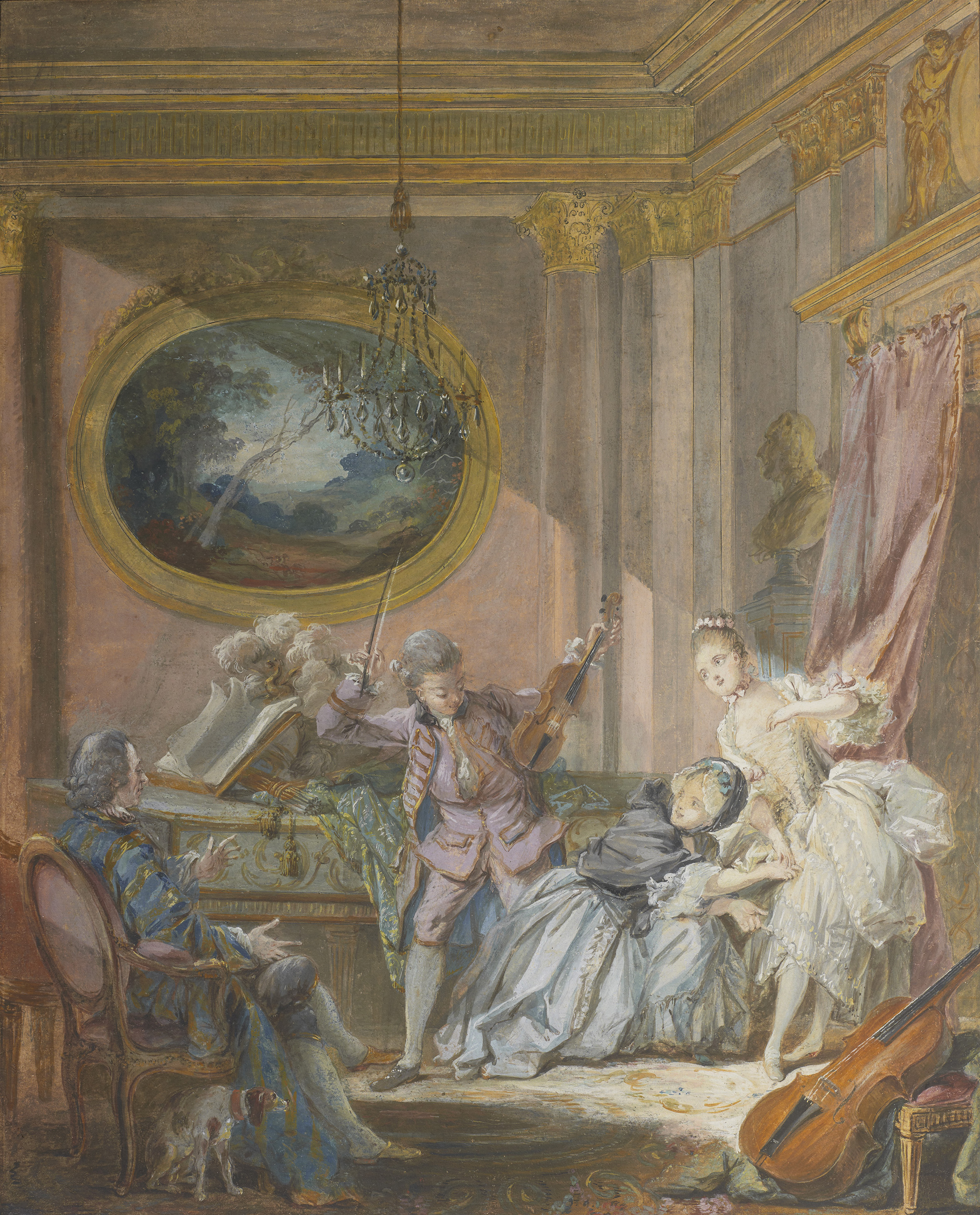 A watercolor by Pierre-Antoine Baudouin (above), for example, seems to depict a moment of frivolous, if delightful, entertainment — musicians and dancers gathered in a richly-ornamented interior. An Aubusson carpet, a crystal chandelier, a Classicizing oval landscape, and a delicate gold-and-blue harpsichord compete for our attention before rose-colored walls. The moment, however, is supremely serious. The elder gentleman at left, clad in a silk dressing-gown, reacts to the scene presented for his approval. As the dancing-master abandons his fiddle, he exchanges a knowing glance with the seated matron below. The time has come for action: she grasps the hand of her daughter, still in a graceful dancing pose, to propel her towards the wealthy nobleman, who they hope will look on her with favor. The rest of the young woman's life hangs in the balance, and likely the lives of her widowed mother and dancing-master as well. 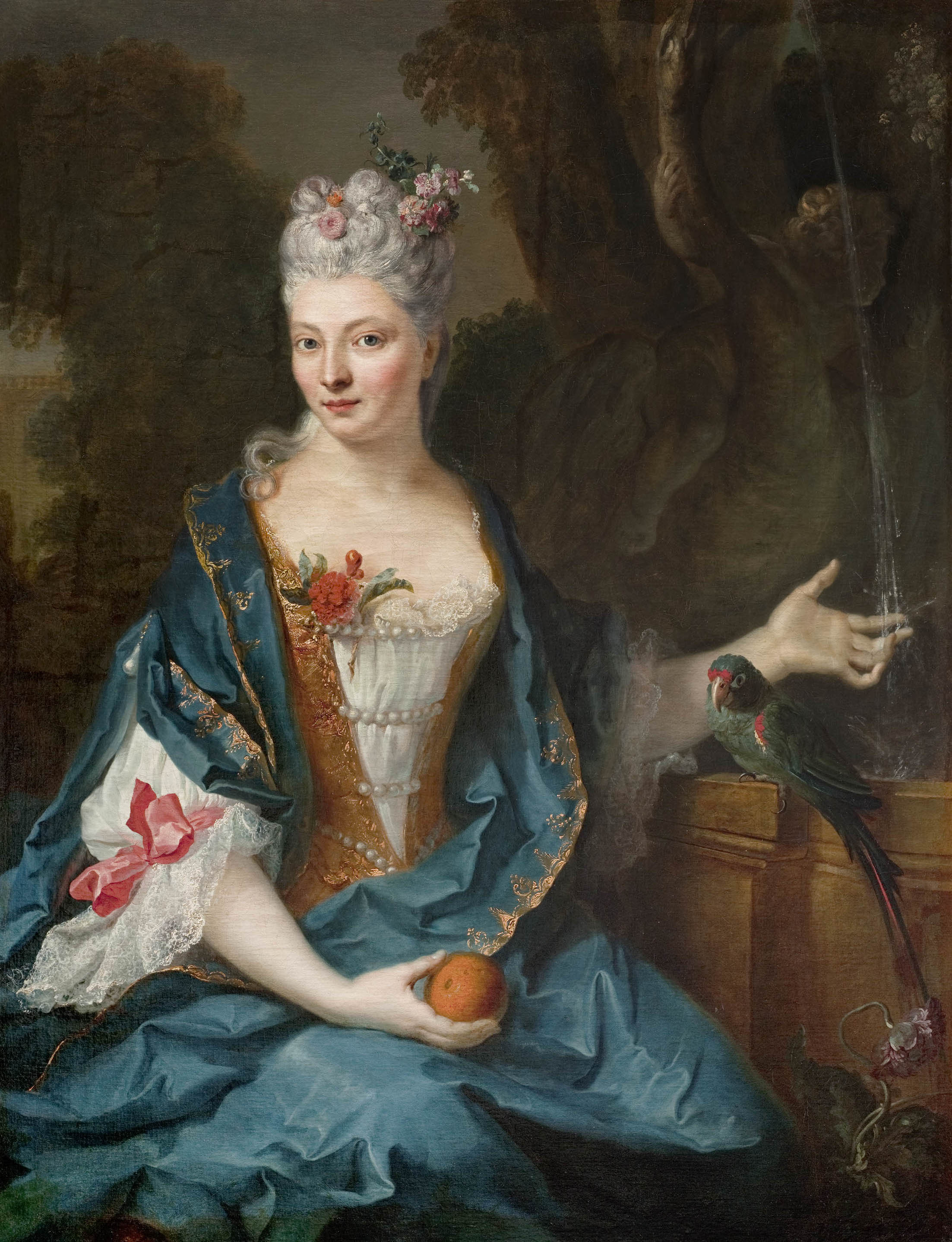 A more mature woman portrayed by Jean-Baptiste Oudry enjoys the good fortune of material wealth. Her low-cut, gold brocade bodice, her rich blue taffeta robe, and her lacy undergarment with bows at the sleeves, all point to the dress of a married noblewoman or court lady. Her pale, smooth skin and elaborately dressed, powdered hair are those of a young matron. Behind her stretches a deep landscape, implying that her new family owns land, while the low wall of her outdoor terrace is crowned with a parrot, which, like the woman, turns his gaze towards the viewer. The woman bathes her fingers in the jet from an elaborate swan-shaped fountain, while her other hand holds an orange, perhaps a marital symbol or a clue to her identity — it has been proposed that she is a member of the house of Orange, which ruled the Netherlands. The artist was best known in his later career for his realistic depictions of animals, but his training took place under the pre-eminent portrait painter of the early 18th century, Nicolas de Largillière, from whom he learned the successful integration of grand settings, rich materials, and perceptive depiction of the sitter's psychology. 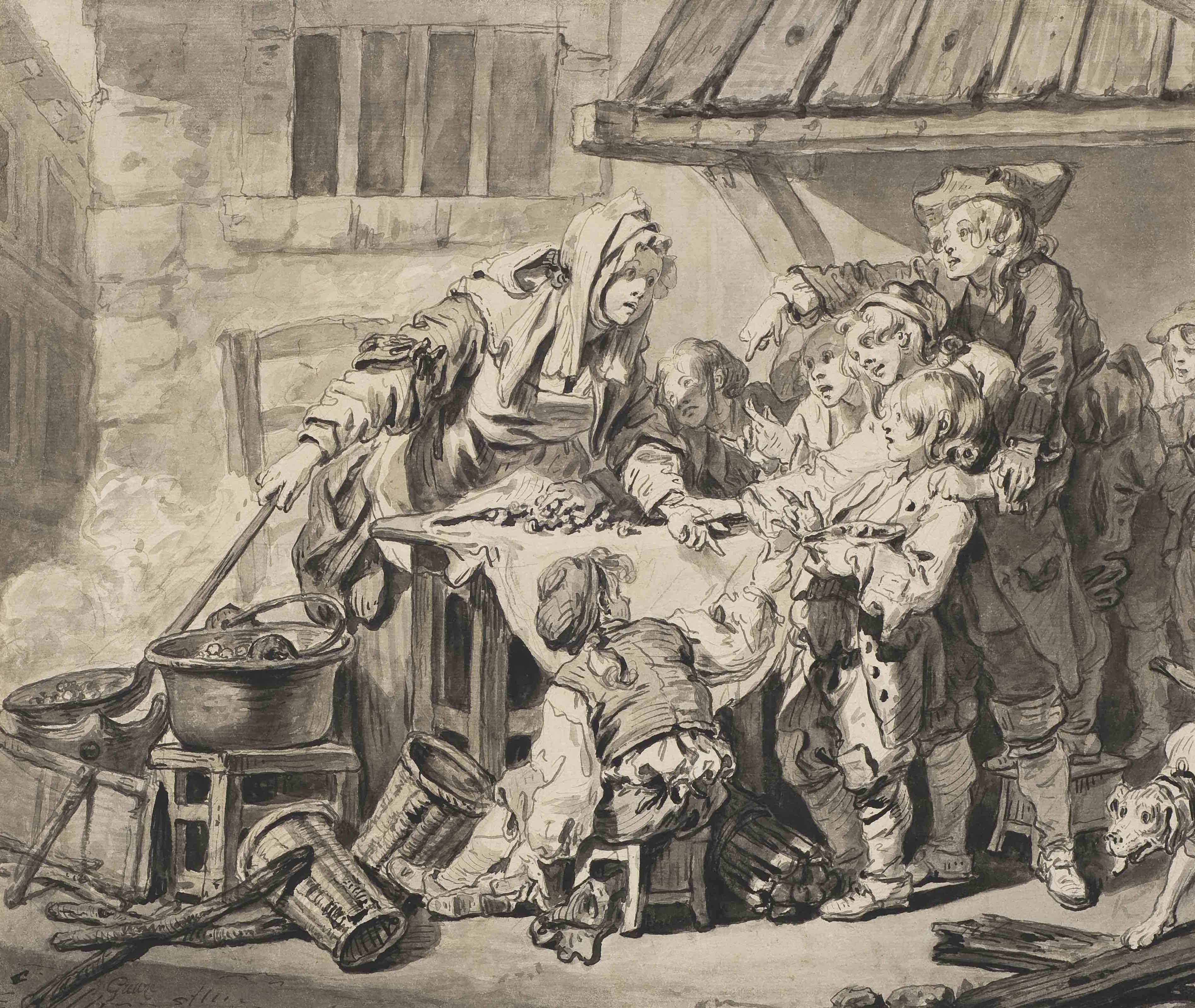 
The role of wife and mother, though much desired by many, was not the only path open to women. In the lower classes especially, circumstances often forced women to find employment outside the home. In a drawing by Jean-Baptiste Greuze (above), a woman does her best to deal with a crowd of rowdy neighborhood children, while attending to her business of roasting chestnuts. One buys, one argues, one steals, while others look on or join in. Such scenes of daily life were one of Greuze's specialties, as he was able to depict middle- and lower-class people in a sympathetic fashion and realistically portray their emotions.

Besides lower-class cottage trades such as chestnut-selling or laundering, the arts also offered women of the merchant class employment. Writing, music, and painting were generally acceptable occupations, though these professions were often restricted. Other pursuits in the arts, such as acting, were often seen as licentious. For most of these women, work outside the home was not compatible with the role of wife and mother. 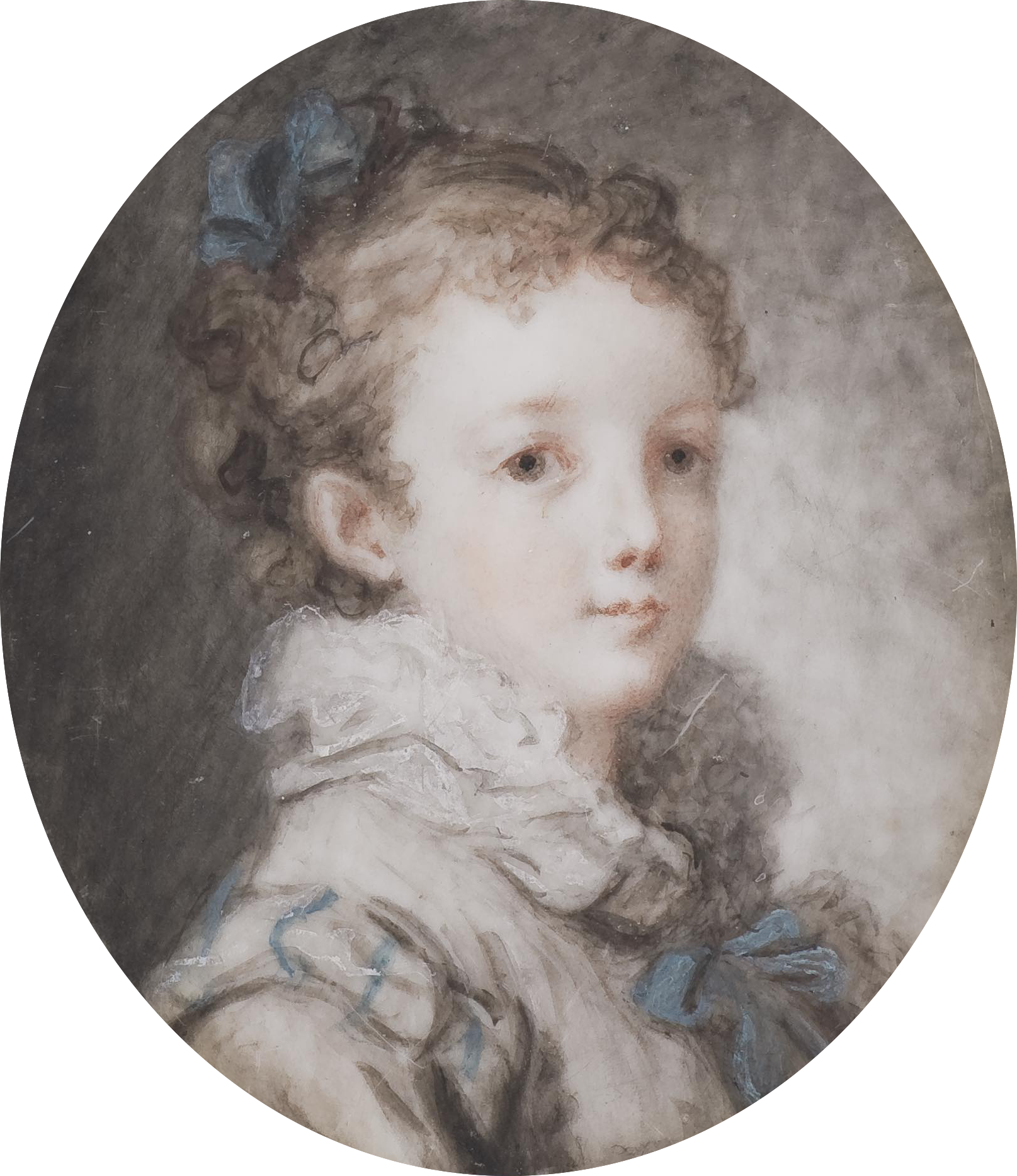 There were, however, exceptions. Marie-Anne Fragonard, wife of the painter Jean-Honoré Fragonard, pursued her own career as a painter of portrait miniatures. Once her husband's pupil, she married him in 1769. Their presence at the Louvre gave her access to a variety of sitters, whom she depicted in a free, expressive style that contrasted with the usual exacting precision of miniature painting. This young woman (above), dressed somewhat informally, is captured in a moment of unusual psychological depth. Long thought to be the work of her husband, Marie-Anne's miniatures were only identified as hers in the 1990s. Works by other female artists, such as the still-life painter Anne Vallayer-Coster and the Neoclassicist Pauline Auzou, also appear in the exhibition.

Becoming a Woman in the Age of Enlightenment explores not only these but many other ways in which women shaped — and were shaped by — French society. Though the setting is very different, the Querelle des Femmes that kept 18th-century drawing-rooms and lecture halls abuzz has echoes today. Such 21st-century issues as workplace relations, women in science and politics, and the debates over working inside or outside the home, all have their roots in the age when French society began to discuss seriously the challenges and opportunities of women's lives.

Top Image: Becoming a woman in the Age of Enlightenment: French Art From the Horvitz Collection exhibition at the Crocker.