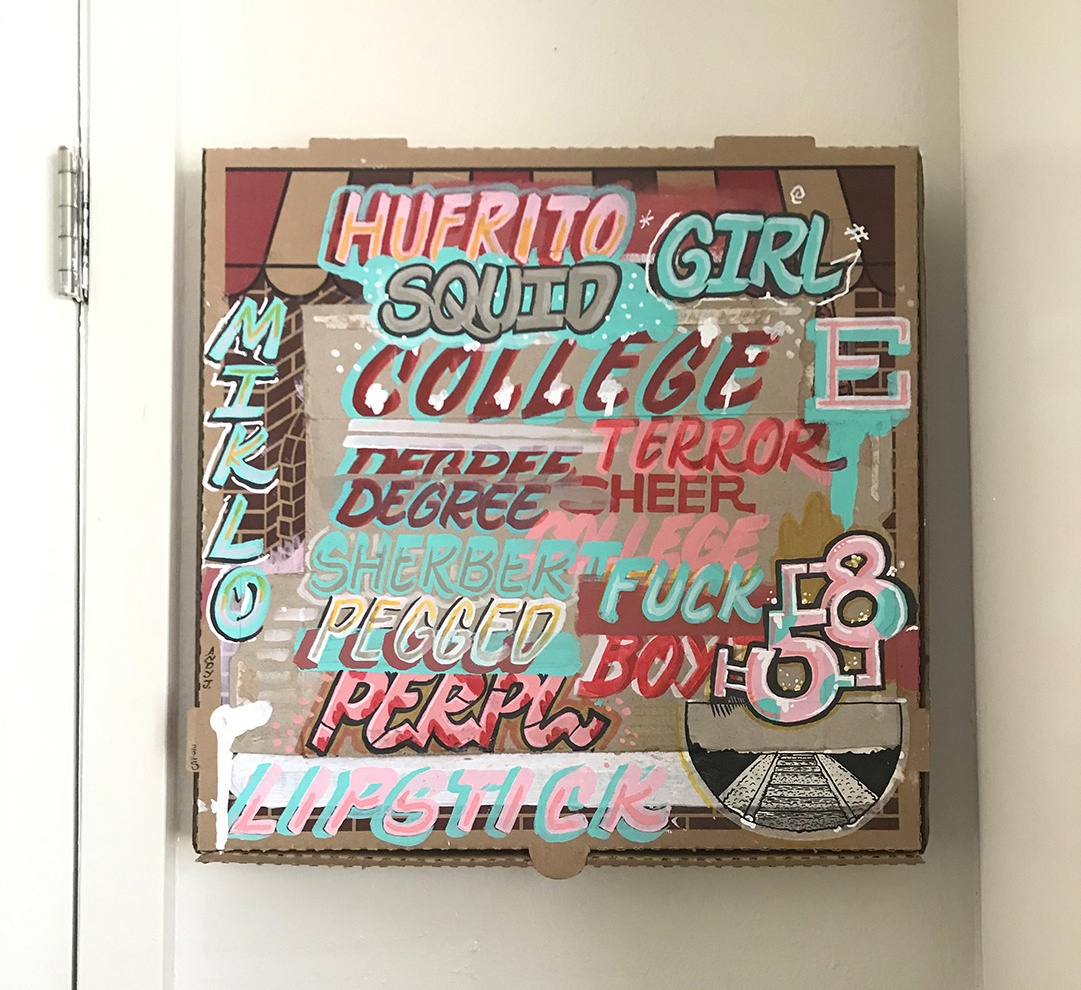 Creativity is not dependent on the use of traditional or fancy materials. In fact, two artists I greatly admire used a wide range of materials, many of which are not usually found at an art supply store. Martín Ramírez, an artist in the Crocker’s permanent collection, and Andy Garcia, a dearly missed friend whose work resides in my personal collection, lived different lives in different eras. However, I find a visionary, kindred spirit in their works that inspires me to think freely and without bounds.

On a slow, sluggish summer day in 2017, I had the opportunity to see Ramírez’s work up close and personal. It started with John Caswell, a, long-time Museum registrar, who rounded the Crocker’s admissions desk and emphatically declared, “I’ve got something you might like to see.” His raised eyebrows insisted we leave immediately. Intrigued, I walked with him to the second floor, as he informed me that the art handlers were moving some artwork around. This meant my favorite piece in the collection, which is fragile and light sensitive and thus rarely on view, was accessible.

Following an authorized swipe and secret code, we stepped into the art storage room, where we carefully snaked in and around gilded frames, mountain ranges, color fields, and Abstract Expressionist situations until making the final turn toward our destination: The Virgin by Martín Ramírez. She hovered over me in her crumpled splendor. I was gobsmacked. It was like cool water had enveloped my body, slowly cascading from my head and pooling at my feet. 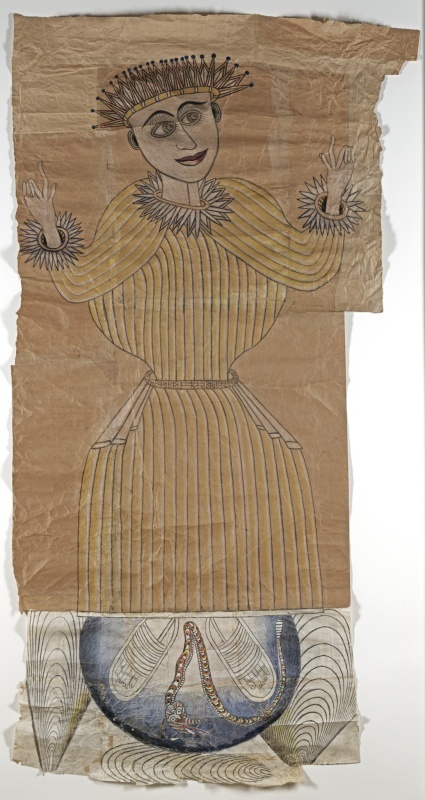 Born in 1895 in Jalisco, Mexico, Ramírez was a Catholic, a tenant rancher, and un hombre de caballo (a man of the horse) — a badge of social standing in his community. In 1925, at age 30, he departed from his wife and children to seek high-paying work with the railroads in California. Following the Great Crash of 1929, unemployment rates skyrocketed, which prompted the United States government’s response of increased efforts to deport immigrant laborers. In 1931, under financial distress in a hostile land, Ramírez became homeless. He was arrested in Stockton, California and ultimately committed to the Stockton State Hospital in 1932 for observation. He was then transferred to DeWitt State Hospital in Auburn, California in 1948 where he remained isolated and declared a catatonic-schizophrenic until his death in 1963.


Prior to being institutionalized, Ramírez would send letters home with illustrations adorning the pages. It was not until the mid-1930s, while at DeWitt, that he started prolifically making drawings. Using any materials at hand — crayons, charcoal, fruit juice, shoe polish, and saliva applied with matchsticks — Ramírez created a body of work replete with a personal iconography of horses and riders, trains, tunnels, and crowned Madonnas. His art eventually came to the attention of Tarmo Pasto, a professor of psychology and art at Sacramento State College, now California State University, Sacramento. He encouraged Ramírez to draw and provided him with supplies. By way of Pasto, Ramírez’s drawings came to the attention of artists and art professionals and were subsequently collected and exhibited. (Sidenote: Ramírez’s first exhibition was organized by the Crocker.)

After I took in the simple yet brilliant grandeur of Ramírez’s work, John pointed out seams that veined throughout the wrinkled brown and white papers that made up the six-foot-tall drawing. The brown paper, which accounts for about three-quarters of the piece, had an uneven surface and jagged edges that appeared to be of an old parcel wrapping, tape and all. Printed texts and images could be seen through on the other side of Ramírez’s quilted canvas.


I think about this moment as I work from home, not just because few people get a chance to see his work up close and personal. It reminds me of my dear friend, Andy Garcia, whose artwork animates the walls of the apartment I share with my partner. Like Ramírez, Andy made illustrations of trains and train tracks and worked with what he had. He also drew on trains. As I contemplate their prolific bodies of work, I can’t help but wonder if Andy ever rode on the tracks Martín helped lay and what Martín would think about a drawing on a train. 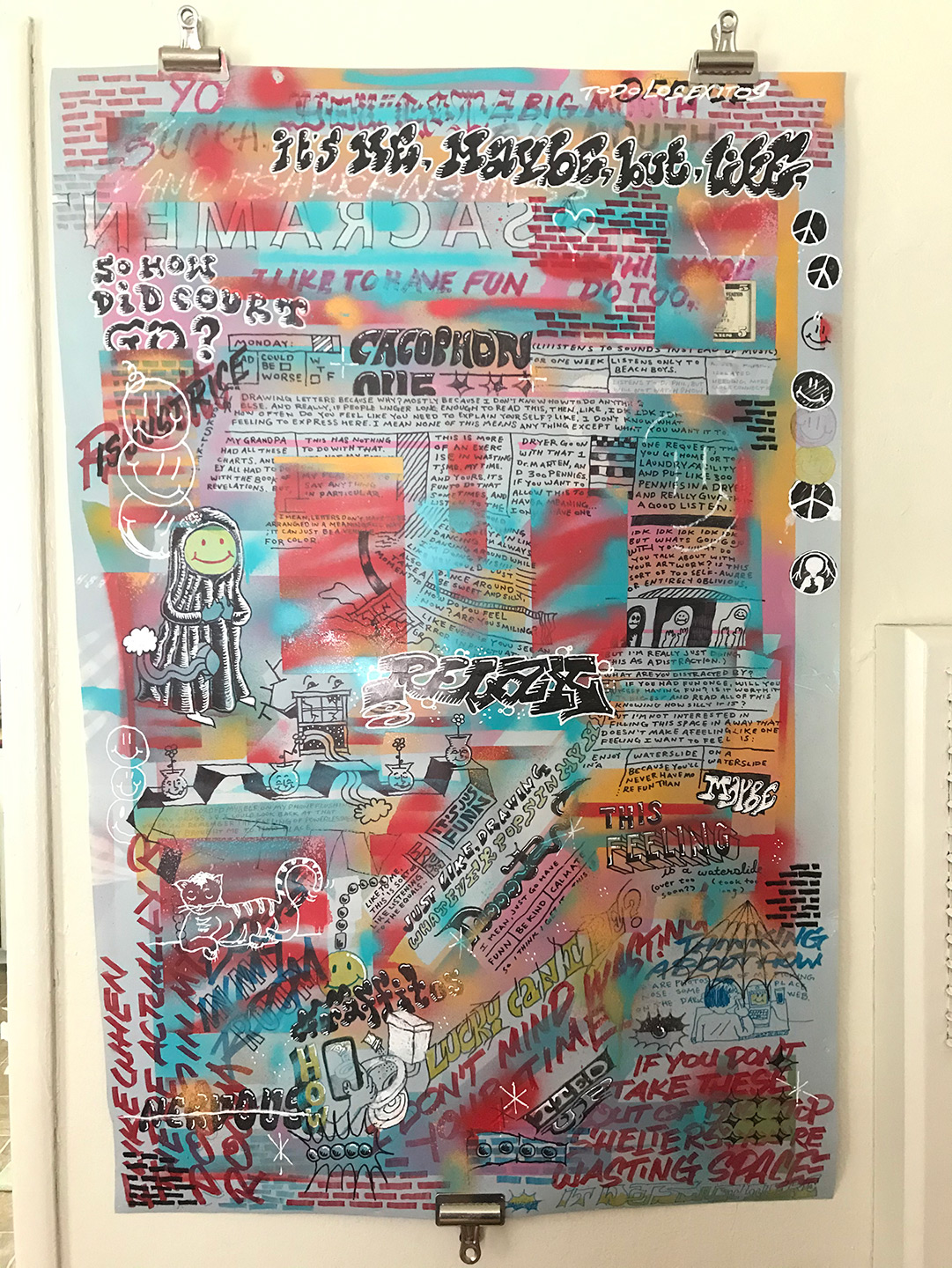 Incidentally, that same day, I texted Andy to see if he wanted some vinyl Andy Warhol banners that the Crocker had used for a previous exhibition — Portraits. Like Ramírez, Andy loved to paint on anything and everything. Pizza boxes, old bus stop advertisements, wood, any fragment of a piece of paper. Andy naturally wanted the banners.

Martín and Andy are vivid examples of the power of creativity. You don’t need to be trained at the Académie Julian to create something. Nor do you need access to the finest materials. You simply need a vision and the drive to make it a reality. As we continue to grapple with the “new normal” – and its impact on our foreseeable futures — I encourage you to find new, inventive ways to occupy your time. What would your personal iconography be? Look around your home and consider the possibilities available to you. Forget formalities and conventions. If you feel stuck or begin to question your creative mind, remember my friend Andy’s words: “Letters don’t have to be arranged in a meaningful way; it can just be a vehicle for color”.

About the Author: Melissa C. Foote is the development assistant and Art Auction coordinator at the Museum. She also sits on the Crocker’s MASS Action Committee. Melissa holds a BA in art history from the University of California, Berkeley and is a Master of Library and Information Science candidate at San José State University’s School of Information.

Three Art Projects You Can Try At Home