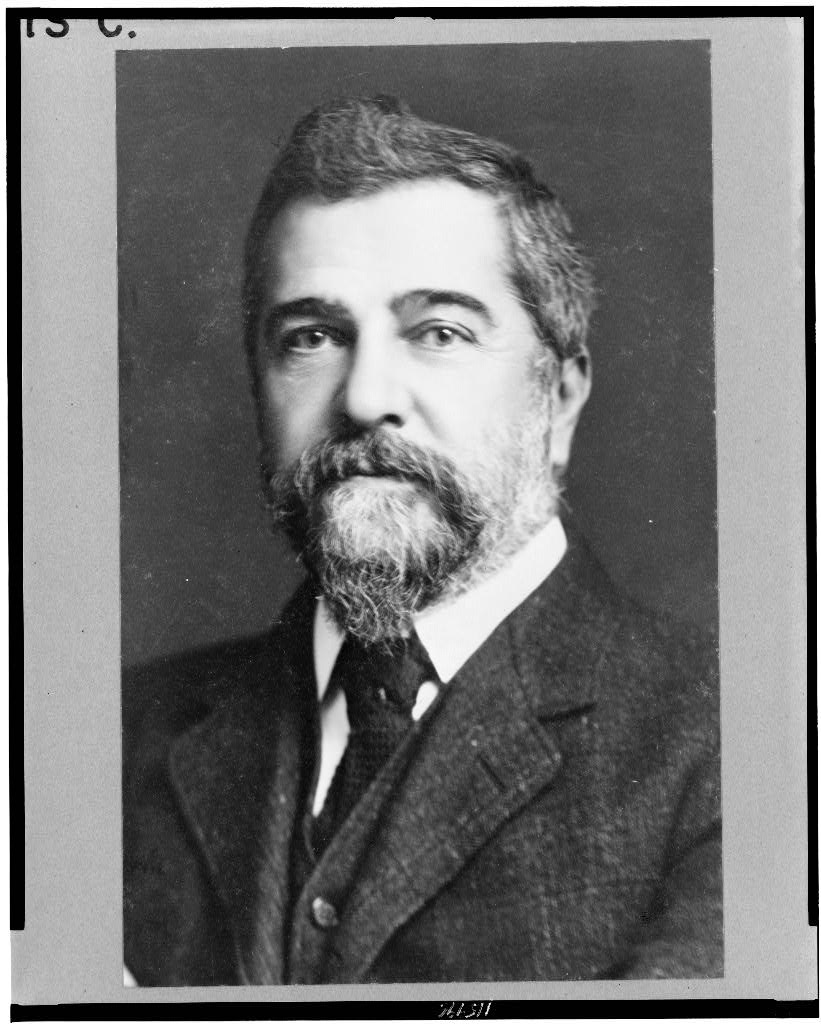 
Louis Comfort Tiffany (American, 1848–1933), the prolific designer and owner of eleven companies during his lifetime, was not the only artist working in glass during the late 1800s and early 1900s. Tiffany had rivals in America and in Europe, including many who capitalized on the innovations developed by Tiffany’s glass producers and principal designers. One of his biggest competitors in America was his friend John La Farge, while René-Jules Lalique and Émile Gallé, represent two of Tiffany’s top competitors in France.

What were Tiffany’s glass innovations? Tiffany’s biggest contribution to the world of glass is related to the medium itself. Prior to the late 19th century in Europe and America, much of the detail used in stained glass windows was painted on, either in black or brown. When fired, the image was literally burned onto the glass. Eliminating much of the paint was Tiffany’s revelation. Instead, he layered pieces of colored glass and incorporated rocks, stones, and gems to create a landscape, a figure, or a geometric design, with leading incorporated as the outline. Although Tiffany did not invent opalescent glass (that accolade goes to John La Farge), Tiffany created opalescent glass with nuanced shading which is reminiscent of a milky-colored opal and is often semitransparent. In order for Tiffany’s glass suppliers to support his output of lamps, vases, windows, glass mosaics, and other glass objects, they produced roughly 10,000 pounds of glass per year for his art studio. Glass sheets were organized by color and stored in his studio with upwards of two tons of glass in five thousand colors and hues available to his creative team, which included principal designers like Clara Wolcott Driscoll and Agnes Fairchild Northrop. 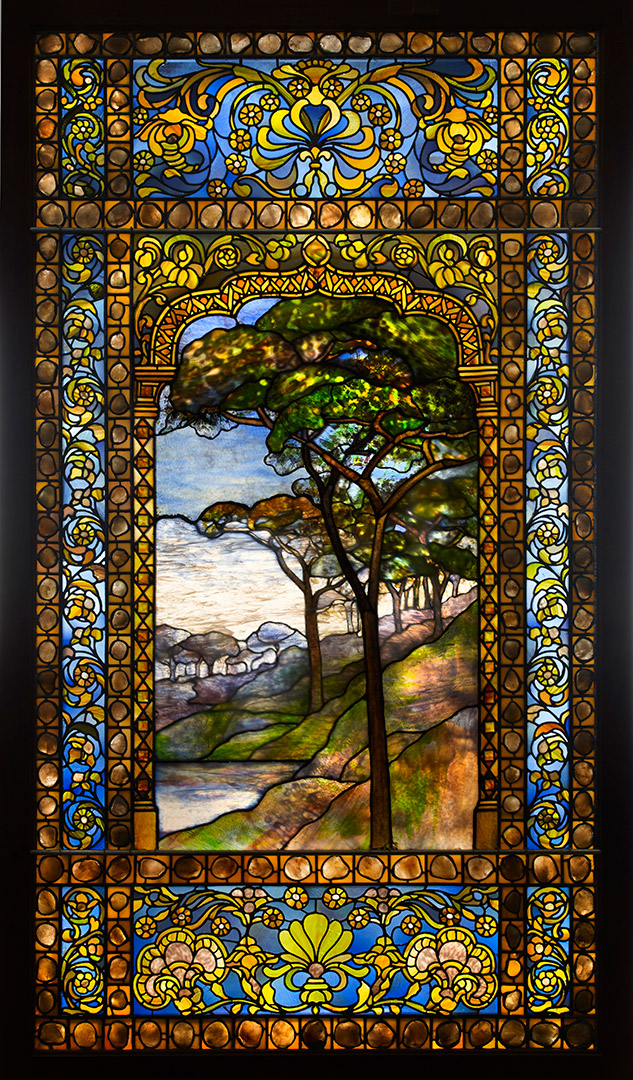 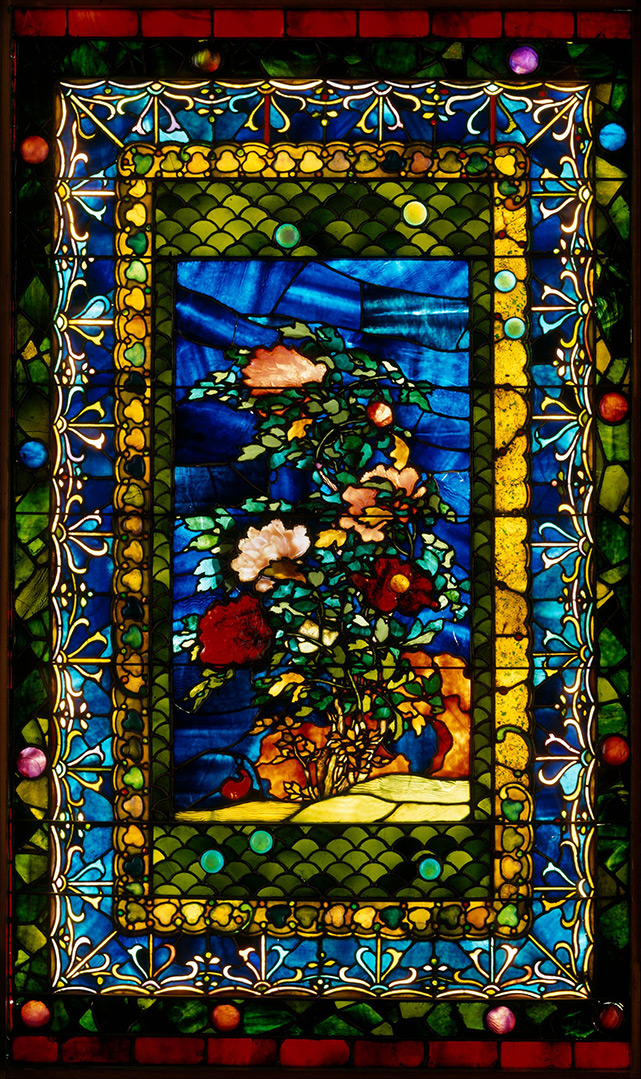 A contemporary of Tiffany, John La Farge (American, 1835–1910) began his artistic career as a painter. Many of his earliest works depict flowers and landscape scenes. These interests carried over to his work in glass, especially to his large-scale windows for private homes. Many of his nature-based motifs were influenced by Japanese art, including the flatness of woodblock prints. Although Tiffany is credited with being an innovator in the medium of glass, both La Farge and Tiffany were experimenting with the creation of opalescent glass at the Heidt Glass House in Brooklyn, New York, around 1880. They also both experimented extensively with the incorporation of stones, quartz, colored glass, folds, and textures. La Farge even described his work in glass as a “rivalry of precious stones.”

Tiffany, however, was a shrewd businessman and fully aware that La Farge was a competitor for ecclesiastical and residential commissions. To undercut La Farge, Tiffany signed an exclusive agreement with Louis Heidt of Heidt Glass House. The agreement stated that Tiffany would be Heidt’s only customer and only person privy to Heidt’s glass-making process. Heidt, in turn, was set to be compensated by Tiffany with glass orders worth 200 dollars, every month for ten years (roughly $24,000 in 1881 or about $600,000 in 2021). La Farge suffered another blow when Tiffany secured a patent for the “Colored-Glass Window” in 1881. The patent covered the assembly process for glass windows, hence La Farge needed permission from Tiffany to assemble sheets of colored glass into the form of a window. Tiffany continued to patent his processes, receiving one for a background surface related to tiles made of opalescent glass and the other for metallic luster on a mosaic or window. Once the patents were received, Tiffany signed the exclusivity agreement with Heidt. John La Farge’s glass experiments were sidelined. 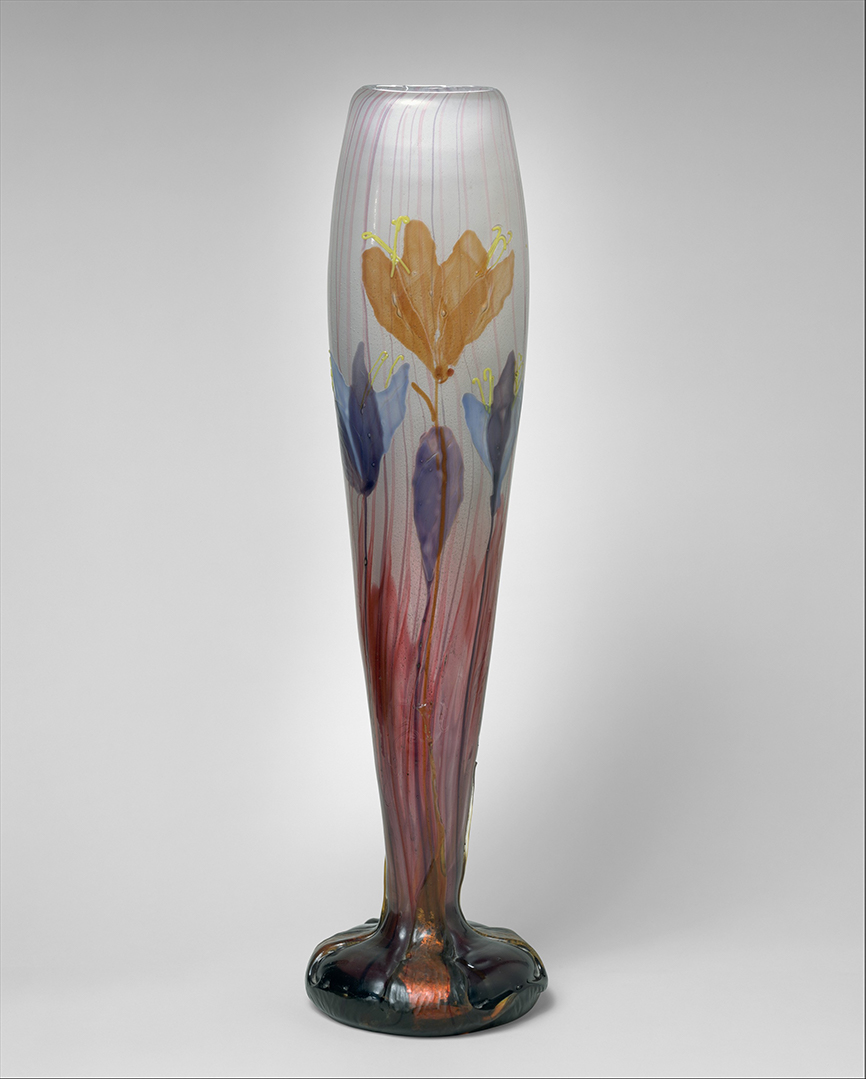 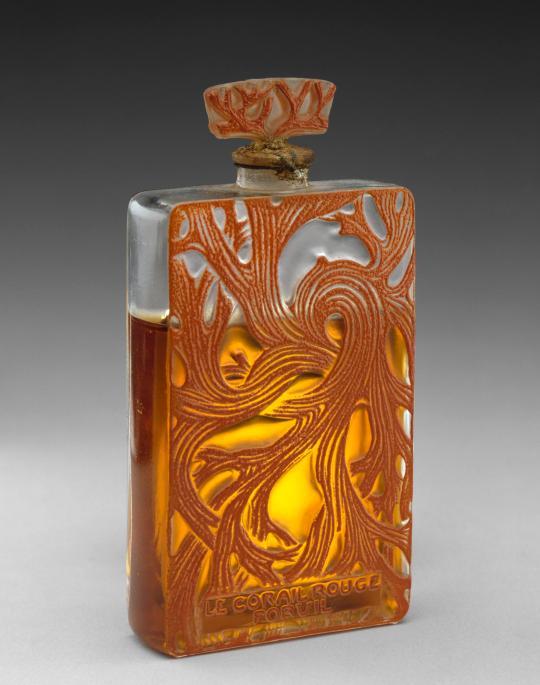 While Tiffany was busy building his glass empire in America, European artists were experimenting in the medium of glass and with the Art Nouveau style. The use of sinuous lines, natural forms, and elements of Japanese design were hallmarks of René-Jules Lalique’s (French, 1860–1945) and Émile Gallé’s (French, 1846–1904) styles.

Lalique is best known for his jewelry, but also worked with glass, metal, and precious stones. Much like the rejection of traditional stained glass attributed to La Farge and Tiffany, Lalique’s rejection of traditional forms in favor of the female nude was both shocking and enticing to the bourgeoisie. Jewelry, especially necklaces and brooches, were often adorned with sirens, nymphs, and sea sprites.

Similarly, Gallé worked from living flora and fauna, incorporating his designs into works of cased glass. This style incorporates layered glass of different colors that are fused together. The glass was then etched or carved to create a cameo of a specific subject. In an artistic turn, Gallé also exaggerated or incorporated defects such as bubbles into his designs. An amateur botanist, Gallé cultivated a garden at his home and connected the plants depicted in his glass vases to their symbolic meaning. The language of flowers, or floriography, was popular during the Victorian era (1837–1901) in Europe and the Gilded Age (1880–1900) in America, as a coded form of communication. Emotions could be expressed through a floral bouquet or a simple drawing of a flower.

The 1900 Exposition Universelle in Paris, also known as the 1900 Paris Exposition, provided an opportunity for artists to display their innovative designs. The Exposition was open to visitors for nearly seven months and saw attendance top fifty million. Showcasing new technological developments, the Exposition was also a testing ground for artists, who exhibited everything from singular works of art to large-scale installations. Lalique created an entire storefront to house his jewelry, compete with a backdrop made to look like a star-filled night sky dotted with flying bats. Yet, Lalique was not the only artist to usher in the Art Nouveau style or glass innovations at the Exposition. Tiffany exhibited Favrile glass, a paperweight vase, an enamel gourd-shaped tray, a Dragonfly lamp (designed by Clara Wolcott Driscoll) as well as glass windows titled Pumpkin and Beets and Four Seasons (a collaboration with designer Agnes Fairchild Northrop), among other objects. His contemporaries had the opportunity to view his designs and investigate his use of materials, as rival John La Farge and European competitors Émile Gallé, Johann Loetz Witwe, and Daum Frères Factory exhibited glassworks in the same building at the Exposition.

Louis Comfort Tiffany may not have competed against the entire world, but his influence and business acumen was evident in America and abroad. As an artist and designer, his connection to natural forms was in keeping with Gilded Age and Art Nouveau trends. As a competitor, he seemingly let very little stop him from lawfully gaining an advantage.