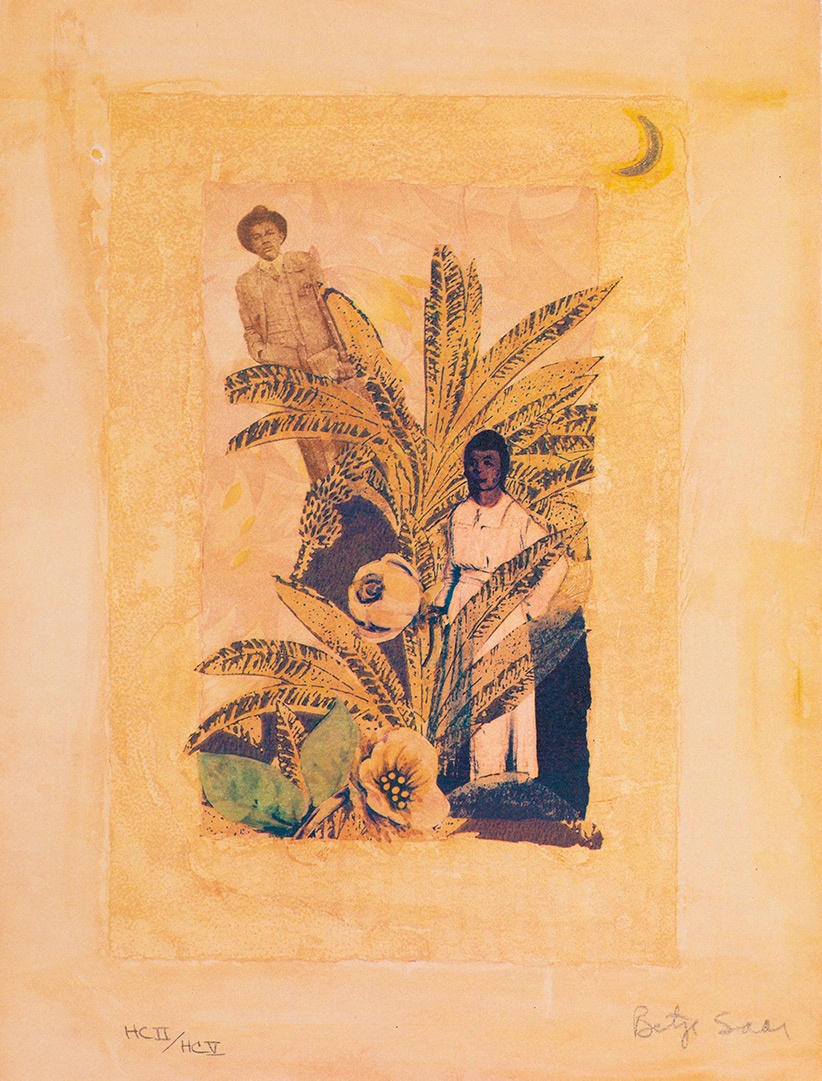 
Transformation, empowerment, and the reuse of historical objects characterize the work of Betye Saar as well as her two daughters, Lezley Saar and Alison Saar. Each artist has a distinct style and works in different media, yet they are concerned with similar subject matter: race, grief, disaster, mythology, hope, and family. Featuring 23 works from the Crocker Art Museum’s permanent collection, Legends from Los Angeles brings together prints, sculpture, assemblage, and installation art that represents a female dynasty of California experimentation.

Betye Saar, born in 1926 and raised in Los Angeles, began working as an interior designer in the 1950s and shifted to printmaking a decade later. After the Watts Rebellion and assassination of Martin Luther King Jr., she began creating assemblage pieces that referenced politics, racism and racist symbols, technology, and memory.

In the 1970s, inspired by the Black Panther movement and the artwork of Joseph Cornell, especially Cornell’s shadowboxes arranged with found objects and fragments of photographs, Saar began collecting. At first, she gathered items from her own life, including bits of fabric, photographs, and household items, though she eventually turned to flea markets and swap meets. She uses her trove of collected objects to make works of art infused with stories that have personal meaning or that reimagine racist memorabilia into symbols of empowerment.


In the portfolio Six Serigraphs: Bookmarks in the Pages of Life, Saar illustrated stories by Zora Neale Hurston. Published in 1925, Hurston’s short story Magnolia Flower recounts a tale of discord between father and daughter over life choices and love. Nature is also used as a metaphor for the cycle of life and progression of time. One of Saar’s prints from the portfolio, Magnolia Flower (pictured top) depicts the story’s subjects separated by physical space and nature. The magnolia flowers and palmetto palms engulf the figures and demonstrate the importance of place. 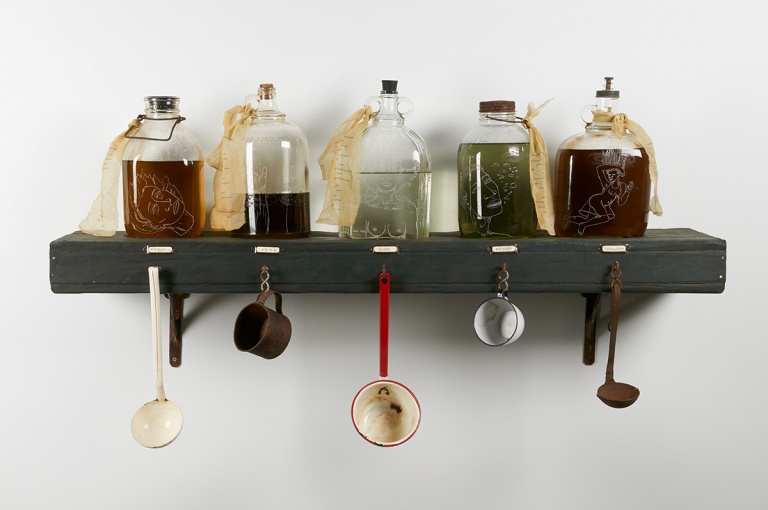 The focus on personal reflection and assembly of objects found in Betye Saar’s works has been a touchstone in the career of Alison Saar. Living and working in Los Angeles, Alison Saar (born 1956), is a sculptor, painter, and printmaker. Sometimes, she creates a sculpture first and then uses printmaking to reexamine her three-dimensional work. Particularly interested in themes related to cultural prejudices, politics, and family, Saar is also inspired by African and Haitian folklore, mythology, and contemporary African American life.


A political and social commentary on the Flint, Michiganwater crisis, Hades D.W.P. II (pictured above) builds upon Alison Saar’s work related to African American bodies and disaster. Arranged on a shelf are five glass jars that hold varying amounts of liquid, each a different color. The filthy liquids drown figures etched onto the glass. Additionally, the drinking cups hanging below the shelf allude to both communal water supplies and the literal drinking of poison. Nameplates designating specific shelf locations state the names of the five rivers of the Underworld (Styx, Lethe, Acheron, Phlegethon, and Cocytus), which are said to move the dead to the afterlife in Greek mythology. Saar’s skillful use of text is also evident in the sculpture’s title, as Hades refers to the ancient Greek ruler of the Underworld and D.W.P. stands for the Department of Water and Power in Saar’s hometown of Los Angeles.

Like her sister, Lezley Saar (born 1953) imparts the titles of her artwork with significant meaning. Each piece, which is often a portrait, is “named” rather than “titled” and typically carries with it a short description of the figure. 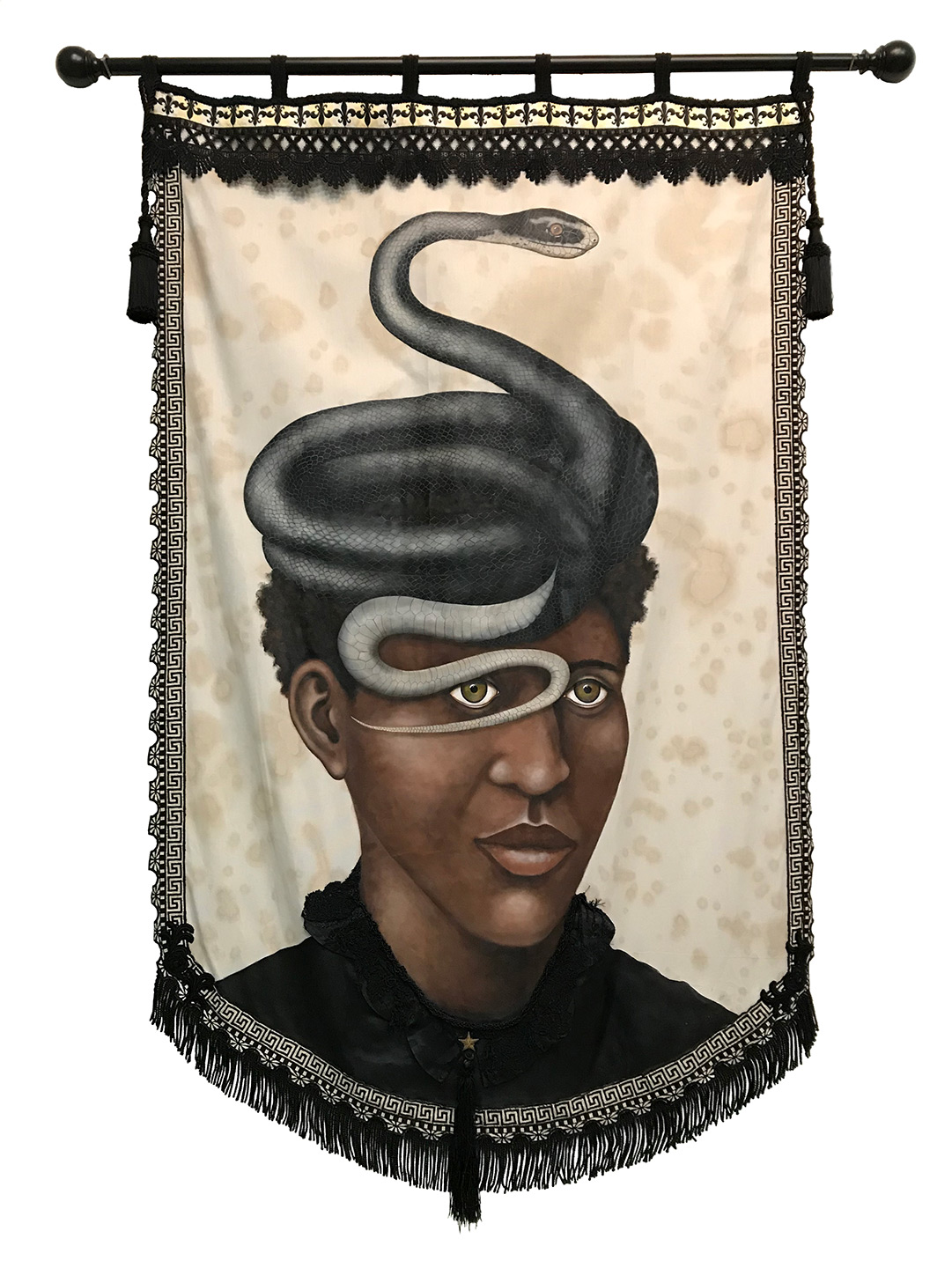 Zerpenta Dambullah: Born under the shade of a black willow tree in New Orleans in 1826 sat on a rock turning rain into tobacco smoke (pictured above) is a painting on fabric shaped like a gonfalon, a flag often associated with coats of arms and ceremonies such as graduations. Elements of portraiture mix with mythology in the painting’s title and in the figure’s depiction. The snake coiled high on top of the figure’s head suggests images of Medusa, a Gorgon of Greek myth, whose hair made of snakes could turn humans to stone. Saar is drawn to outcast characters that appear in literature and individuals who were forced to exist in two worlds during different historical eras.

Legends from Los Angeles is scheduled to open January 24 and close August 15, 2021. Dates subject to change.


About the Author: About the Author: Jayme Yahr, Ph.D., is Associate Curator at the Crocker Art Museum and a specialist in American art, with an emphasis on the late 19th and early 20th centuries. Yahr works extensively with the Museum’s photography, Native American, and American works on paper collections.