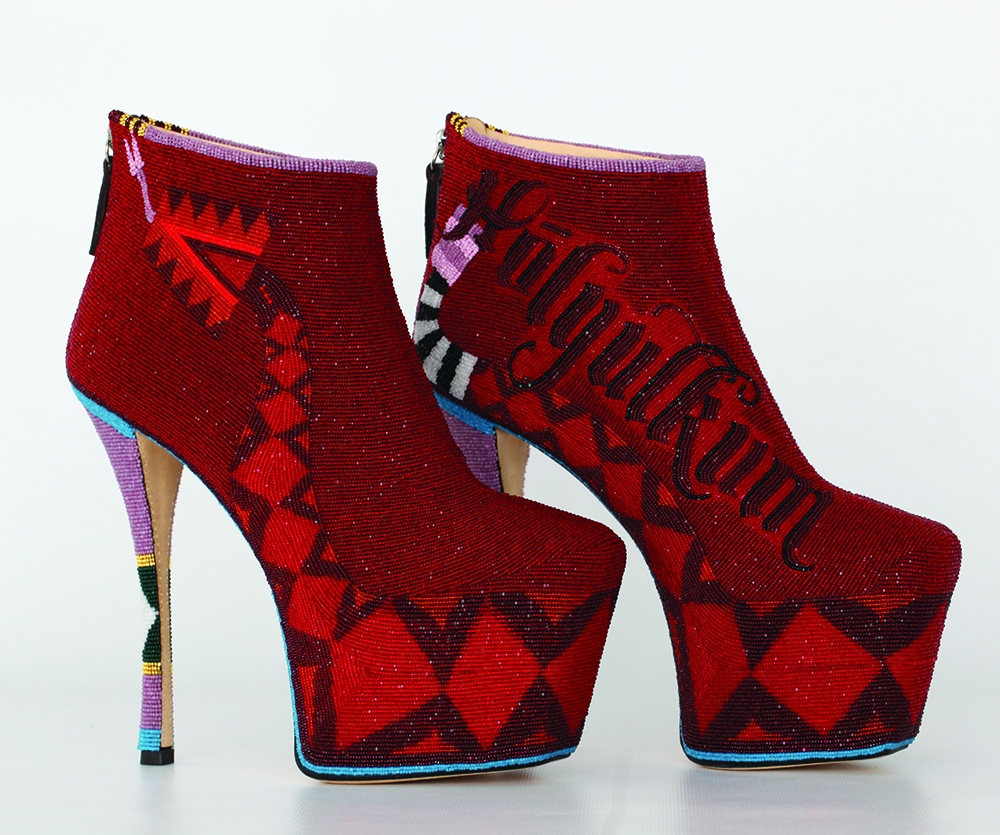 The Crocker is pleased to announce artist Jamie Okuma as the recipient of the third John S. Knudsen Prize.

In addition to a $25,000 cash award to the artist, the prize funds the Museum’s purchase of Okuma’s work No Place Like Home, “Holyulkum,” a pair of intricately beaded shoes that will debut in the fall exhibition When I Remember I See Red: American Indian Art and Activism in California. The show opens at the Crocker in October 2019 and then travels to additional venues, including the Institute of American Indian Arts in Santa Fe, New Mexico and the Autry Museum of the American West in Los Angeles.

Born in Glendale, California, in 1977, Okuma moved with her family when she was five years old to the La Jolla Indian Reservation in Pauma Valley, which produced several successful California Indian artists, including James Luna, Fritz Scholder, and Sandra Okuma — Jamie’s mother. There, Jamie Okuma took up beadwork and began sewing regalia for herself and others. She took graphic design classes at Palomar College in San Marcos before attending the Institute of American Indian Arts.

Since age 18, Okuma has been exhibiting her work at the Heard Museum Guild Indian Fair and Market in Phoenix and at the Santa Fe Indian Art Market in Santa Fe, earning a total of five Best in Show awards — two in Arizona, and three in New Mexico. In addition to international exhibitions of her work, Okuma also has work in the permanent collections of many U.S. museums, including the Metropolitan Museum of Art, the Minneapolis Institute of Art, the Nelson-Atkins Museum of Art in Kansas City, and the Smithsonian’s National Museum of the American Indian.

Through her beadwork, Okuma explores fashion as it relates to modern indigenous beauty, at the same time showcasing the pride, diversity, and complexity of American Indian women. Using designer shoes as her canvas, Okuma creates innovative beaded sculptures that honor traditional Native arts.

Okuma describes Dorothy’s ruby slippers from The Wizard of Oz as her first memory of fashion and the beginning of her love of shoes: “It was the color, the way they sparkled, and the magic ability to take you home no matter where you were. I was a fish, they were my bait, and I was hooked.” The color red is especially significant to the artist, who notes that red pigments are used in rock paintings associated with coming-of-age ceremonies for young women.

The work’s title, No Place Like Home, “Holyulkum,” honors Okuma’s ancestral land (affectionately called “the hole” by family members), and her clan, the Wassuks. Both names are beaded onto the shoes alongside abstracted rattlesnakes, which historically inspired geometric designs on traditional California Indian basketry.

“I’ve often described my beaded footwear as self-portraits. These are no exception. My love of pop culture, couture fashion, family, home, Native culture. It’s all here.”

The John S. Knudsen Endowment Fund was established at the Crocker in late 2012 by a gift from the estate of art collector John Knudsen to annually support an emerging or mid-career California artist while also funding programs, exhibitions, acquisitions, and other endeavors related to the artist’s work at the Museum.

Artists may use the award to work in the studio, to travel, to purchase materials for a specific body of work, and to pursue other creative projects. Awarded by a committee of review, the prize is open to all artists in California, with priority given to painters, and may be awarded only to artists who have not yet had a solo exhibition at a major art museum. In 2017, the prize was awarded to Cyrus Tilton (1977–2017), and the 2018 prize was awarded to Mark Dean Veca (born 1963).