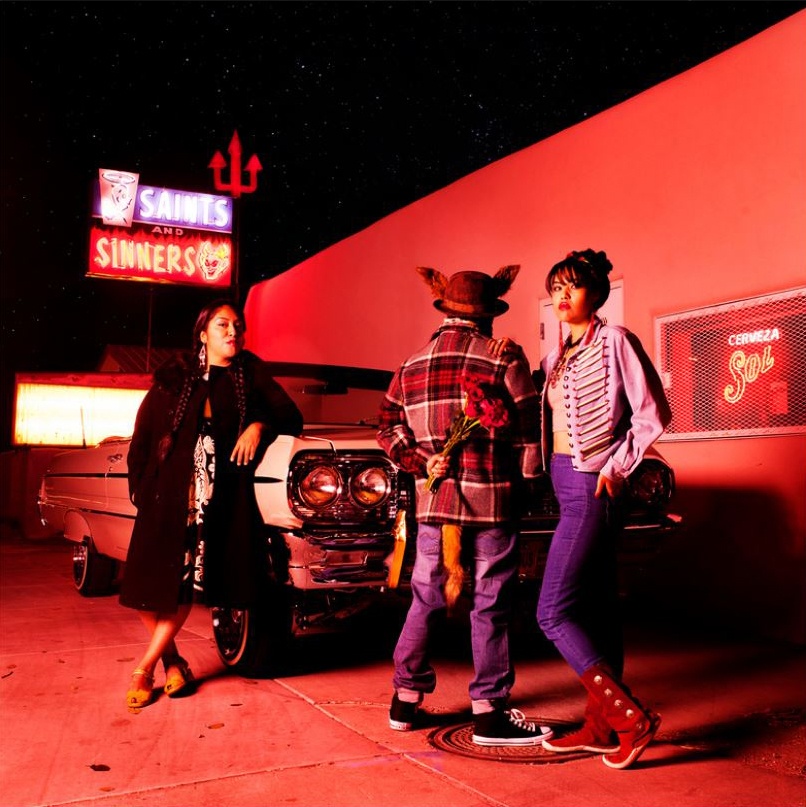 Indigenous photographers give voice to long-silenced narratives. By turning the camera inward to create artwork that represents their communities, their multi-faceted identities, and cultural appropriation and stereotypes, Indigenous photographers challenge colonialist frameworks of history and meaning. When visible side by side, the works of Native American artists Cara Romero (Chemehuevi), Wendy Red Star (Apsáalooke), and Tibetan artist Gonkar Gyatso create a dialogue based in the importance of cultural knowledge and dress, and the ways in which photographs can hold memories. Each artist’s work is a posed portrait and at least partly autobiographical. In the case of Red Star and Gyatso, the photographs are self-portraits, while Romero creates fictional scenes as a mash-up of Native American oral histories and contemporary life, using friends and family members to play specific roles. The similarities between the works of these three artists do not end with portraiture: An interest in identity, symbolism, and specific use of lighting, digital manipulation, and repetition are visible in each work and resonate across time and place.

Cara Romero uses photography as a medium to ". . . tell the modern story of Native identity" [1]. Born in Inglewood, California, Romero was raised in Santa Fe, New Mexico; Houston, Texas; and the Chemehuevi Valley Indian reservation in California’s Mojave Desert. In 2019, Romero’s Naomi was on view at the Crocker as part of the exhibition When I Remember I See Red: American Indian Art and Activism in California. She also participated that year in Desert X, an exhibition held in the Coachella Valley, that uses the physical environment as its gallery walls. Romero installed her photographic series Jackrabbit, Cottontail & Spirits of the Desert as billboards. The work reflects upon the ancestral lands of the Cahuilla, Chemehuevi, Serrano, and Mojave people. In the summer of 2021, a new series of billboards, similar to those on view during Desert X 2019, will be installed in Los Angeles and will feature Romero’s work with Southern Californian Indigenous communities.

In Romero’s Coyote Tails, No. 1, 2018 (top image), Coyote — a known trickster — is depicted as a character attempting to woo two women with a bouquet of roses. The women, who look directly at the viewer, are the main subject of the photograph. Staged outside the Saints and Sinners liquor store and bar in Española, New Mexico, Romero tells a visual story of virtue and vice. Each of her photographic series references the intersection of contemporary life and Native American stereotypes. The white 1964 Impala, a symbol of car culture, reflects this intersection with a touch of irony. She explains that the photograph represents the “. . . excitement of my twenties, of dating, cruising, car culture, and places like Saints and Sinners. A lot of the pieces are autobiographical" [2]. The intention behind her work “is to create a critical visibility for modern Natives, to get away from that one-story narrative, and to dig into our multiple identities" [3]. 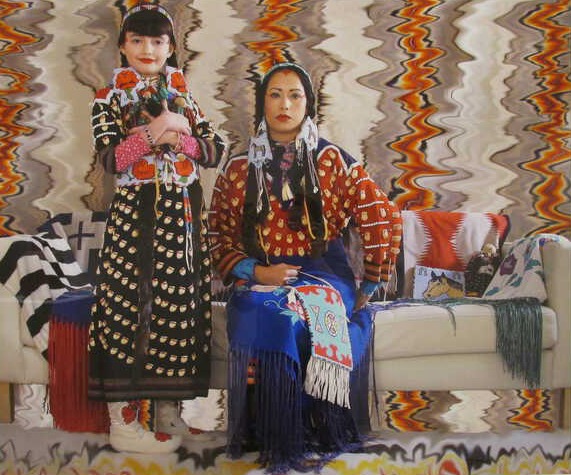 Like Romero, Wendy Red Star makes clear that contemporary life and Indigenous life are not mutually exclusive. Adept at nuance and reclaiming stereotypes to challenge notions of identity, Red Star’s work is often a self-portrait or uses archival material in new ways. In 2006 Red Star created a series of self-portraits, titled Four Seasons, in which she posed in kitschy diorama settings to emulate exhibitions sometimes found in natural history or ethnographic museums that had racist overtones. By controlling the narrative, Red Star gives voice to the Native American experience while in turn calling on museums to reexamine their traditional structures and practices.

In Apsáalooke Feminist #1, 2016, Red Star, along with her daughter Beatrice Red Star Fletcher, poses in traditional Apsáalooke (Crow) regalia. Each item of clothing — from the elk tooth dress and beaded belt to the shawl and moccasins — signals the honors and virtues of its maker and wearer. The double portrait references the importance of passing down knowledge and cultural identity through generations. The focus on pattern, both the traditional ones found in regalia and the photoshopped motifs of the background, speak to tradition and manipulation, and the multiple identities visible in one photograph. Likewise, the photograph’s title points to women’s rights and the connection between gender and racial equality. A person can, simultaneously, be traditional and feminist, as well as traditional and radical. She explains, “As a brown person, as a brown artist, your work is political" [4]. 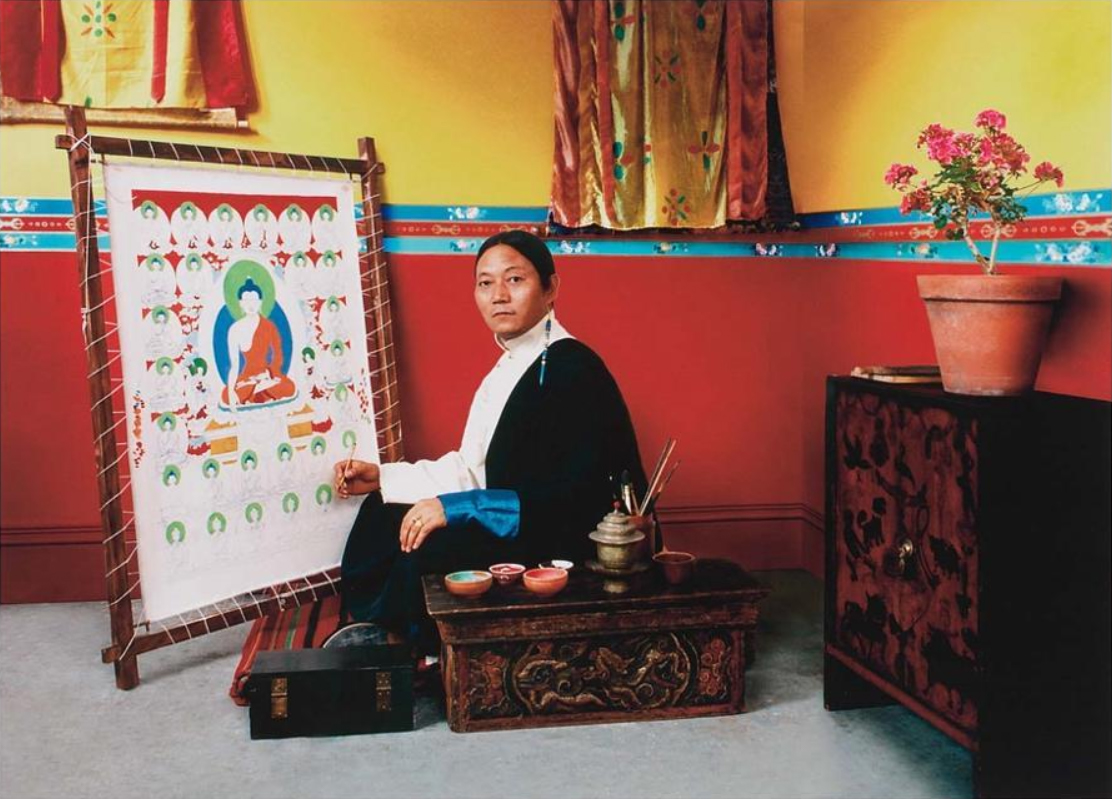 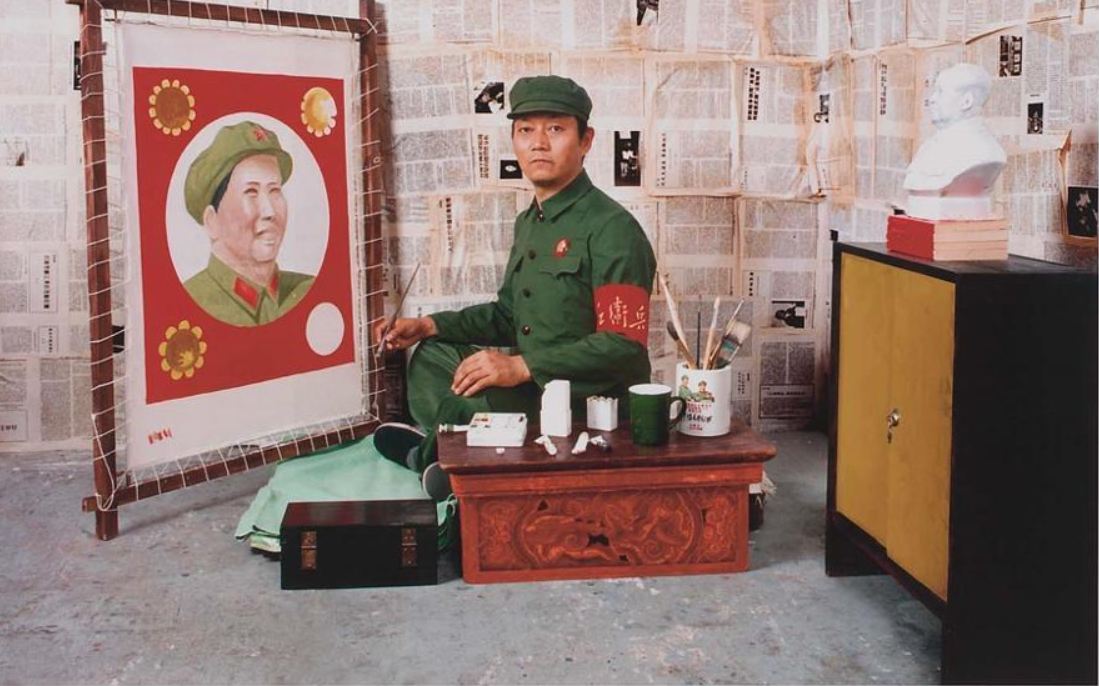 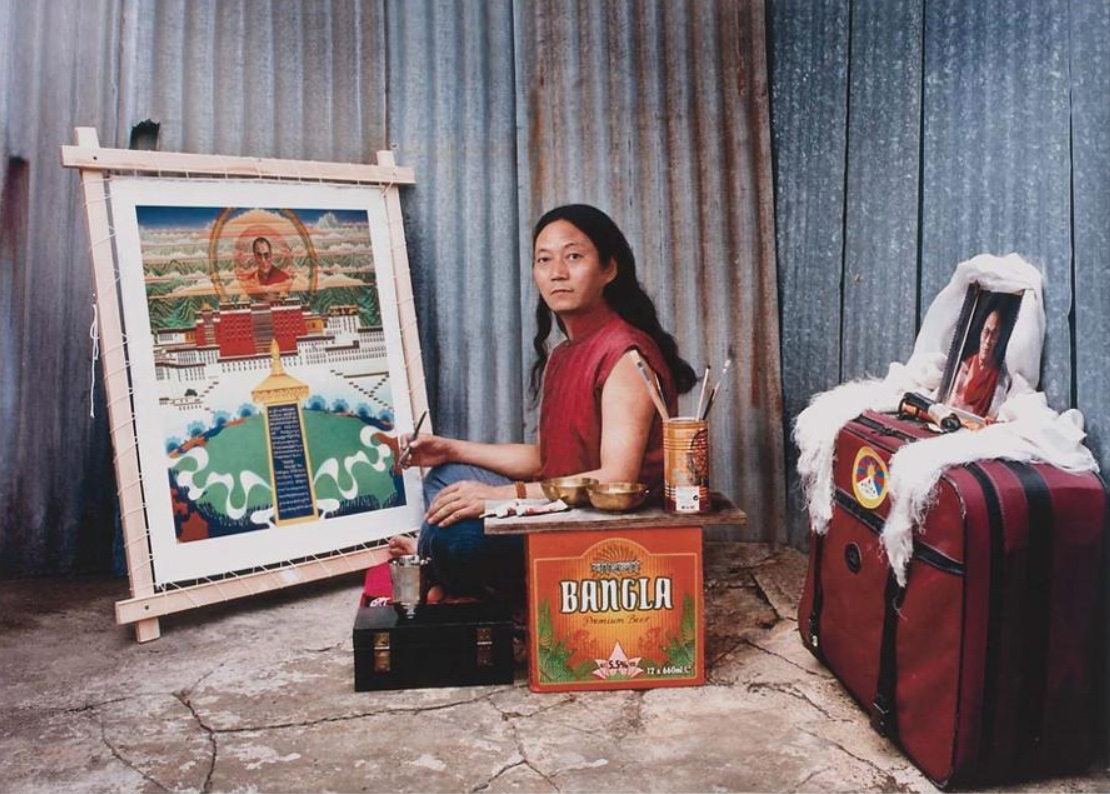 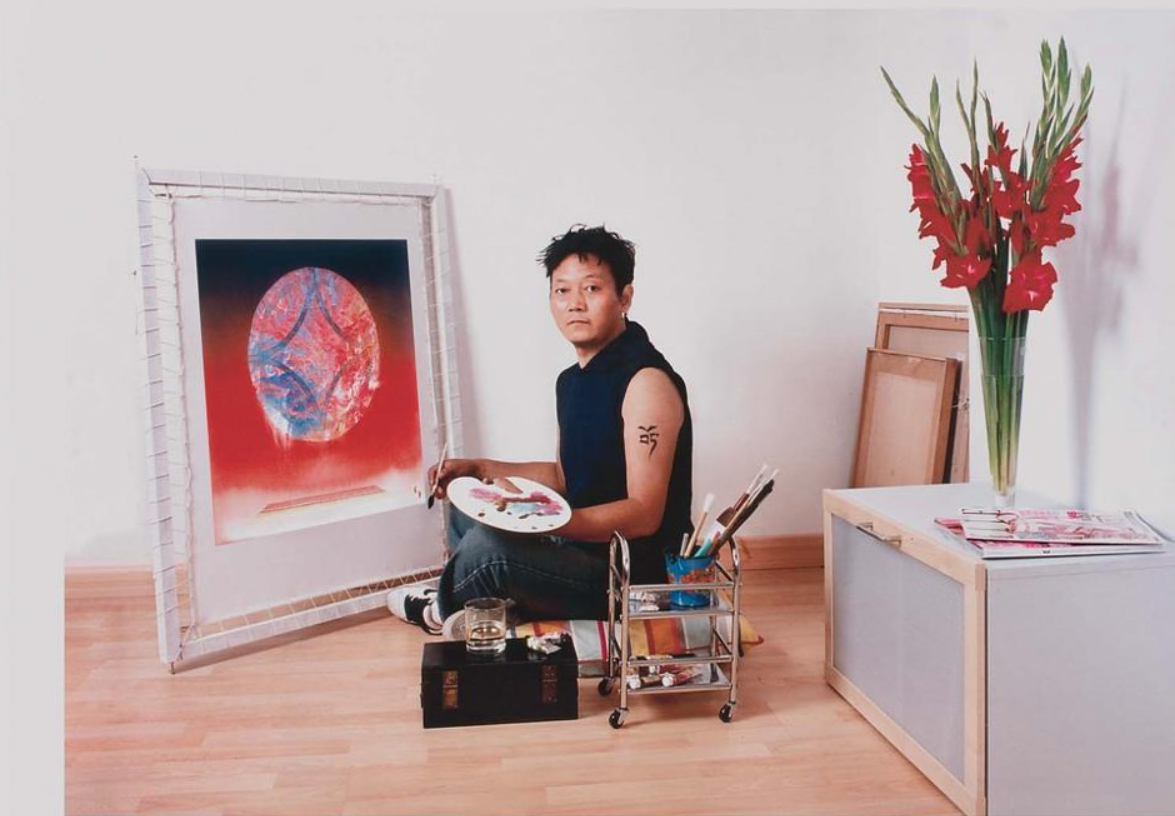 In a similar vein to Red Star, Gyatso turned the lens on himself to investigate how political, religious, and cultural shifts in Tibet’s history impacted his worldview and his identity. Gyatso’s My Identity #1-4, 2003, questions how an era or a culture can be visually defined and how individuals often rely on dress to perform a specific identity. The series is a riff on a 1937 photograph by C. Suydam Cutting, the first Westerner to enter the Tibetan capital of Lhasa. He portrayed the Dalai Lama’s senior thangka painter (traditional Tibetan scroll painter) at work.

Gyatso explores the idea that a single person can have multiple identities over the course of time and positions himself in four divergent roles. In the first self-portrait, he is dressed as a Lama and paints a Buddha. In the second, he is dressed in the uniform of the People’s Liberation Army and is surrounded by Communist posters while painting Mao Zedong. The third portrait is of Gyatso in exile in India, painting an image of the Dalai Lama while using a Bangla beer carton as a table. The final photograph shows the artist in Western dress creating an abstract work.

The series follows Gyatso’s own story of movement, ideology, and dress. Born in Lhasa, Gyatso studied Chinese brush painting in Beijing before moving to India to learn thangka painting. He then relocated to London to attend the Chelsea School of Art and Design. Much of his work is based on the mixing of popular culture with Buddhist imagery, and he looks to everyday life for inspiration and irony. The founder of The Sweet Tea House, a gallery which exhibits the work of contemporary Tibetan artists, Gyatso is deeply engaged in questioning how artists, countries, and identities are defined.

All six of these photographs are on view in the Museum’s photography space through late summer of 2021.

About the Author: Jayme Yahr, Ph.D., is Associate Curator at the Crocker Art Museum and a specialist in American art, with an emphasis on the late 19th and early 20th centuries. Yahr works extensively with the Museum’s photography, Native American, and American works on paper collections. For more about the new photography space see "Dust Bowl. Home. Land."