When San Francisco’s Panama-Pacific International Exposition (PPIE) opened on February 20, 1915, it was the greatest world’s fair to date in the American West. Officially, the exposition celebrated the completion of the Panama Canal, but it also repositioned San Francisco as an economic and cultural leader following the earthquake and fire of 1906.

The official image for the exposition, The Thirteenth Labor of Hercules, was created by Perham Wilhelm Nahl, son of Hugo Wilhelm Arthur Nahl and nephew of Charles Christian Nahl, both early California artists prominent in the Crocker Art Museum’s collection. Perham Nahl’s image depicts Hercules, traditionally associated with 12 seemingly impossible labors in mythology, now performing a 13th: pushing apart two continents to allow for the building of the Panama Canal. Buildings from the exposition, despite being in San Francisco, are visible between the cliffs.

After appearing as a prize-winning poster, Nahl’s image was used in advertising and on exposition maps and catalogues. Ceramic artist Louis Robert Samish also used it to create a hand-painted porcelain charger, a work that recently become part of the Crocker’s collection through the generosity of the Sacramento Pioneer Association. Distinct from Nahl’s poster in its circular format, the charger also varies in other small details, most notably in the background buildings. 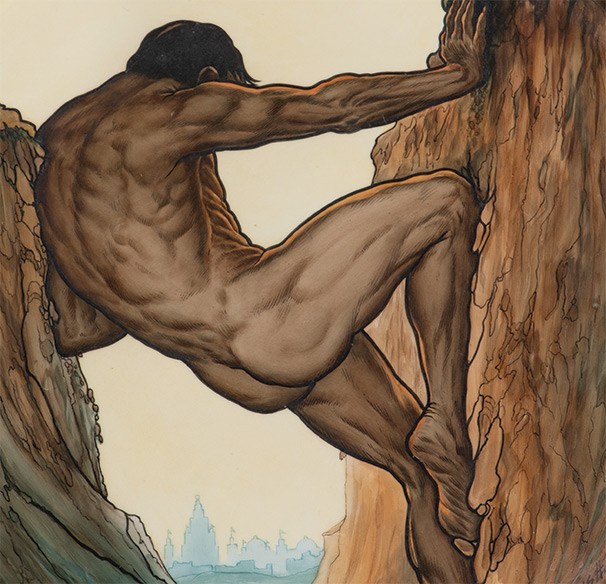 
Samish initially learned china-painting from his father, an immigrant from Austria, and eventually became a leader in the ceramics field, selling his wares out of a shop on Stockton Street in San Francisco. Known for his skillfully executed designs, he decorated his wares with matte, gloss, and luster glazes, sgraffito (etched) decoration, and, frequently, metallic or enamel highlights.

“Samish’s Ceramic Arts had a booth at the PPIE, which featured china-painting demonstrations and a working kiln, along with an array of vases, lamps, fireplace tiles, and decorated functional wares. The Thirteenth Labor of Hercules charger held pride of place in the display, contributing to the overall excellence of the presentation and prompting exhibition judges to recognize Samish’s efforts with a gold medal.