Happenings: Notes on the Arts around Sacramento 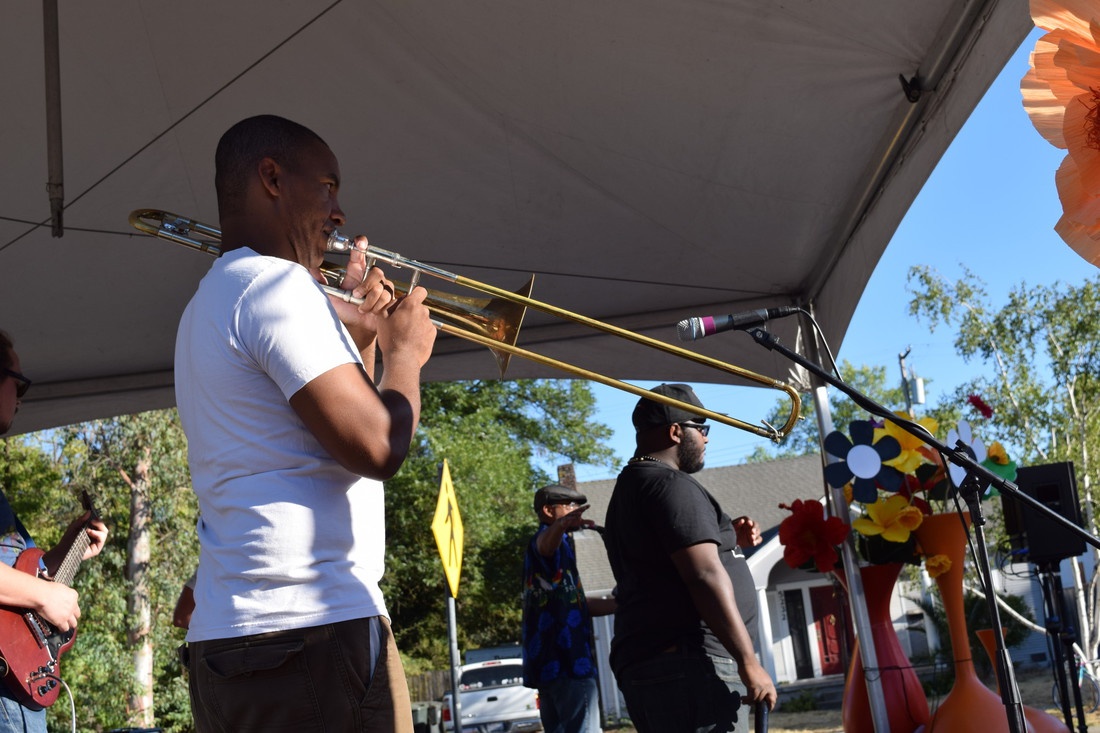 This new, recurring column showcase some of what Sacramento has to offer creatively. It kicks off properly next week with a story about the Central Valley Chapter of American Institute of Architects and their annual Experience Architecture week. The series will then become a bi-monthly feature written by Adult Education Coordinator Houghton Kinsman.

My first encounter with Sacramento occurred in the summer of 2012. I had just finished a transatlantic flight from Cape Town, South Africa en route to visit my girlfriend and her family. Prior to leaving the cool, if somewhat stuffy plane interior, I had many expectations about how the trip might pan out, but very few about the city itself. I assumed I was in for a real “California Summer”: sun soaked barbeques, coastal drives, pristine beaches, and chance encounters with Hollywood stars.

Growing up, I had spent countless nights in Cape Town watching Dogtown and Z Boys with my father, who would wax lyrical about Stacey Peralta, Tony Alva, Jay Adams, and the rest of the Zephyr Skate Team. These conversations, as well his own recollections of surfing and skating in Durban — a city thousands of miles away from Santa Monica and Venice Beach — had, unwittingly, baked this vision of an endless summer into my imagination.

Oh, how wrong I turned out to be.

Z-Boys laid the foundation for modern skate culture. They also (inadvertently) misled the author into thinking all of California was like Santa Monica.

Instead of dealing with sand between my toes, I found myself wading into a sea of bureaucracy — a town full of politicians and state departments, carved up by two majestic rivers, blotted with a veritable patchwork of farmlands and a dry heat like I had never experienced. This was nothing like the cool, breezy Mediterranean climate I was accustomed to at the southernmost tip of Africa. I quickly realized that Northern California was a long way from Southern California and so too were the realities of their respective summers.


Nevertheless, I was deeply intrigued by the City of Trees. There was no Hollywood or pristine beaches, but the backyard barbeques and welcome accommodations met expectations — largely thanks to my girlfriend’s family. In many ways, I found something better than I could ever imagine: a truly diverse city at an important juncture in its history. Plus, my girlfriend saw fit to stick it out with me, which really sealed the deal; I returned permanently in 2018. While Sacramento may not be a major global center like Cape Town or Miami, Florida — where I plied my trade before joining the Crocker — it has gusto. Things are happening here.

Every Day, You Can Do Something To Make This City A Little Better 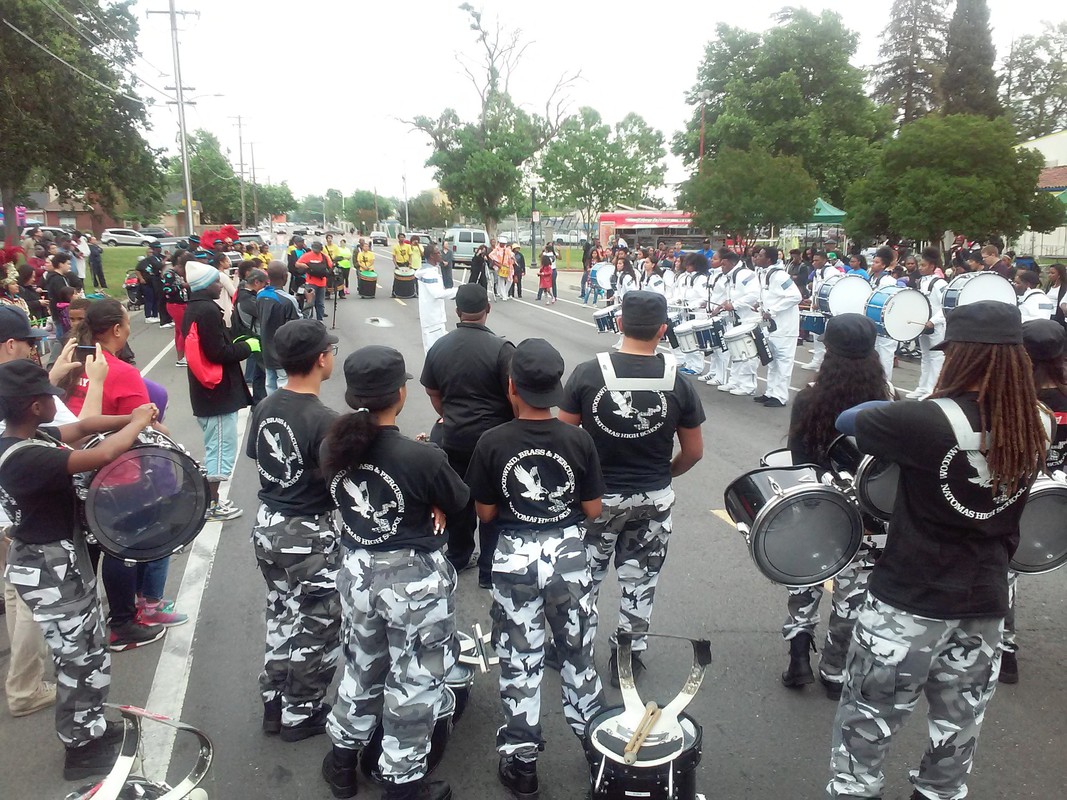 My first year at the Crocker has been interesting. Less than six months into the job, Covid-19 rolled through California, bringing death and destruction as it swept away all sense of normalcy. With barely a handle on my new role, I suddenly found myself supporting a frontline, essential worker. (The aforementioned girlfriend-turned-wife now works as a nurse.) Moreover, I watched helplessly as the museum world — and the broader, vibrant art community that supports it — was ravaged by the ensuring economic crisis. At the Crocker, we lost close colleagues to layoffs and meaningful projects had to be rethought, postponed, or cancelled. This has all made for a year best described as a terrifying, discombobulating, and could you believe it, hopeful.

I say hopeful, because despite the impact of the pandemic, I spent the last few months working with, and learning about, the real resilience of the many organizations and people that support Sacramento’s creative economy. For example, organizations like the Sojourner Truth African Heritage Museum and the Center for Sacramento History have shown how valued diverse stories and histories are here. Cultural practitioners like Liv Moe at Verge Center for the Arts or Estella Sanchez at Sol Collective (two great interviews with them at Articulator magazine here) have provided wonderful examples of the passion that exist for the incubation and preservation of cultural spaces and activism. Other institutions — like the Central Valley chapter of the American Institute of Architects, The Black Artists Fund, and the Ali Youssefi Project — reflect the power and potential that exists in bringing together diverse cultural voices. Getting to know the work of these organizations and many others has also made it easier to understand why Director of Education Stacey Shelnut-Hendrick sometimes likens the Crocker to Sacramento’s “living room.” Meeting and working with these organizations and individuals feels like being invited into a sprawling, complicated, incongruous, diverse, and wonderfully vibrant home.

Whilst I've sheltered in place for the past six months, I've often thought about many of the conversations and visits I had during my first year at the Museum. I've used the extra time to reflect more deeply on my relationship with my new home. I keep returning to one thing: a sign that read “Every Day, You Can Do Something To Make This City A Little Better”. Until a few weeks ago, it hung outside a raggedy, worn old building on J, between 10th and 11th — a building now demolished, wiped away to make room for something new. It was a simple sign, nothing fancy: black and red Helvetica text on a white background, in an unassuming black frame suspended above a shopfront awning. If you drove too fast down J you would easily miss it. But the message was obvious. It carried philosophical weight; it served as an unmistakable call to undertake a commitment. Upon much reflection, for me it’s one that starts with those aforementioned cultural spaces.


What's Happening Outside the Living Room 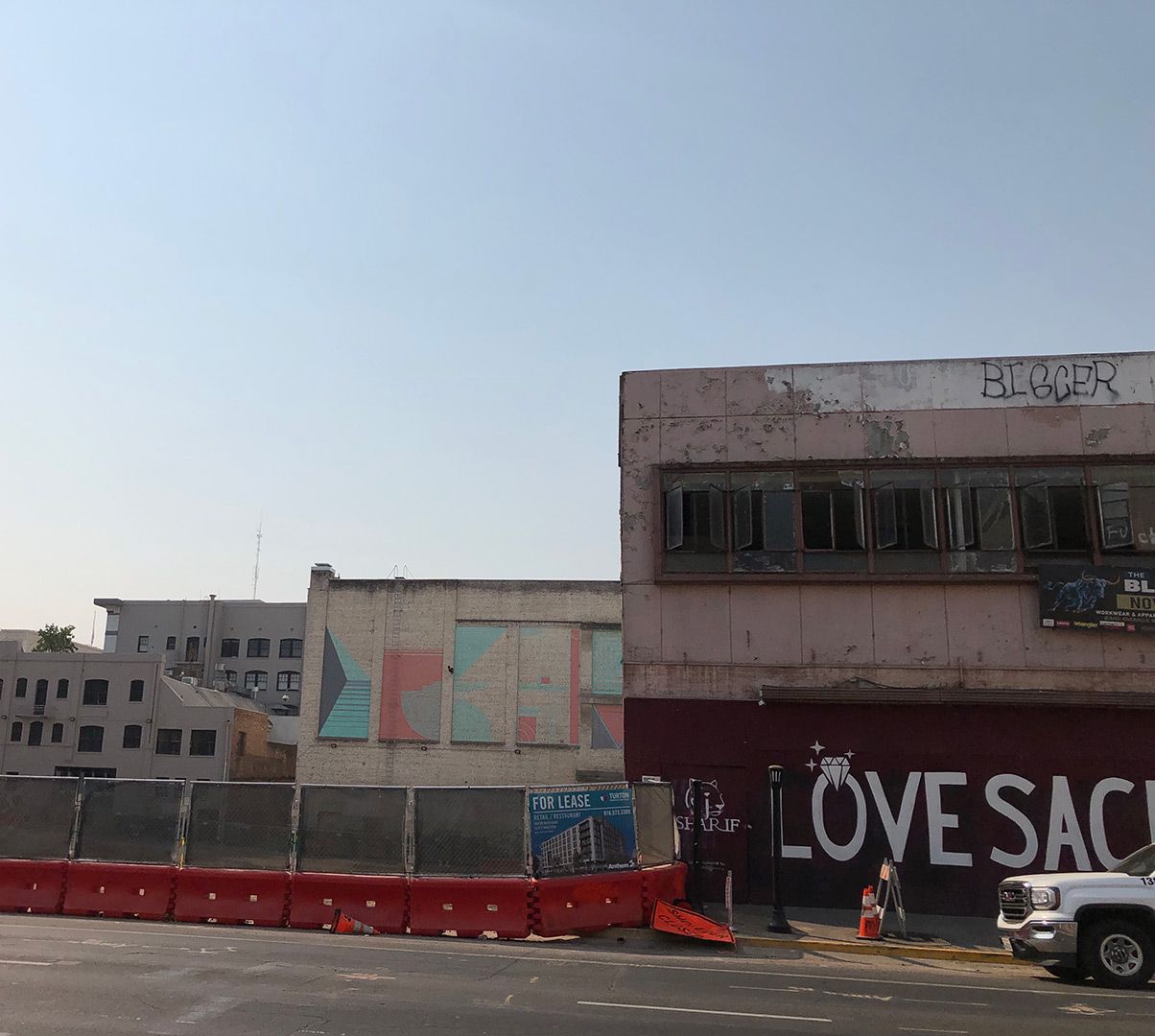 The former site of a simple sign that read "Every Day, You Can Do Something To Make This City A Little Better”

Cities are complex. They are constantly changing, evolving, layering the new on top of the old. They are tabula rasas, on which to build dreams and aspirations; palimpsests on which history continuously impresses marks and meaning. They are sites of joy, strife, suffering, and celebration, who act as ever-present witnesses to the unfolding of the mundane. They are the stages and the lenses on which life is performed. And yet, without the people who enliven them, they are just a collection of brick and mortar shoeboxes and asphalt tributaries. Or as the urbanist Yona Friedman put it: “It is the inhabitant who ‘invents’ the city; an uninhabited city, even if new, is only a ‘ruin.’”


These days, Sacramento is changing in overdrive. It’s a change driven by downtown redevelopment, a burgeoning restaurant scene, a creative economy and Creative Edge plan, community activism, and now an all-encompassing pandemic. And we are seeing the effects in real time, as buildings go down and new ones gp up. Cultural cornerstone institutions like the Sacramento Bee, SacBallet, B Street Theatre and the city’s many museums are being challenged to reinvent themselves. The fight for social and racial equality happens daily on our streets, in Cesar Chavez park, and in the halls of the State Capitol. We are watching, very vividly right now, a city in the midst of what British architect David Chipperfield described as “a negotiation between the visual and the social.” The desire for the aesthetics of rising new architecture and hip entertainment districts tussles directly with the need for more affordable housing and the precarious preservation of neighborhood communities. It is both a metaphorical and actual negotiation that unfolds as the physical built environment changes and the atmosphere within its neighborhoods is altered. This is a negotiation that certainly promises, as with any significant change, to bring both loss and hope. It is important therefore to document and question not only this negotiation itself but also the consequences it brings as it unfolds.

The late, pioneering founder and Director of the New Museum in New York, Marcia Tucker, often bucked curatorial convention in her career. She was particularly astute at setting up exhibitions in ways that asked multifarious questions of its topics and participants —cultural practitioners and audience alike — instead of providing a definitive voice on the themes she explored. Think of the modus operandi of this column as borrowing a few tools from Tucker’s curatorial practice. 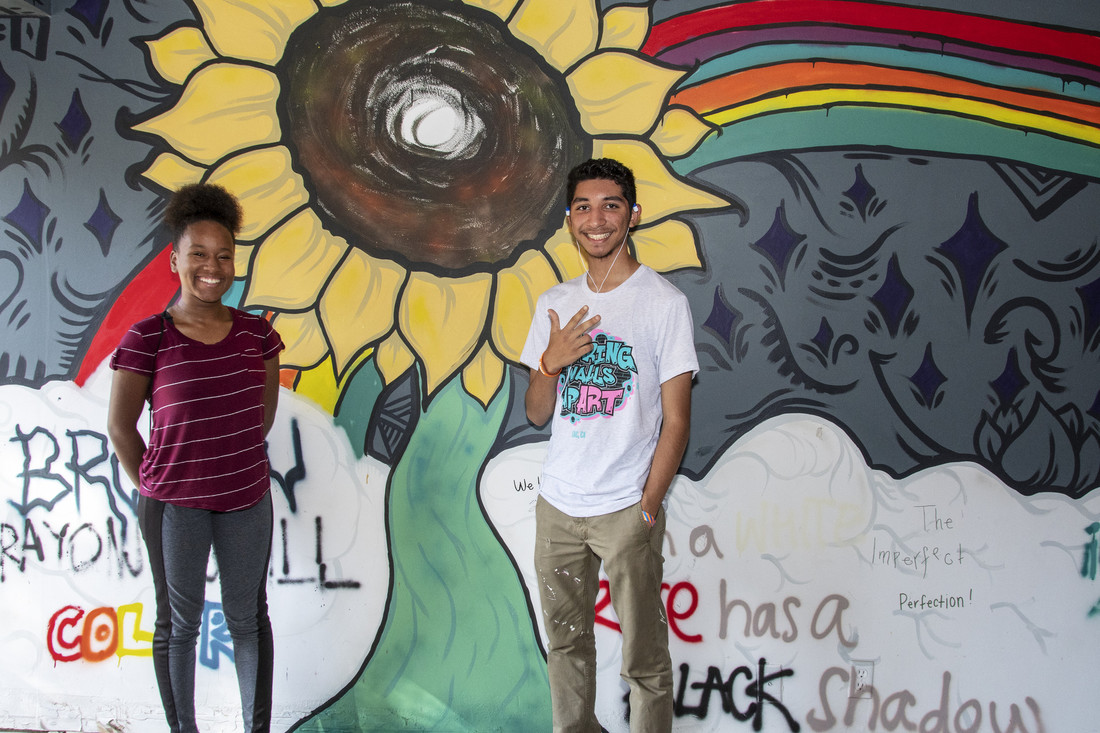 Block by Block Pop Up at Tear the Walls ApArt, 2018

Imagine your typical museum experience of exhibitions. Put yourself in the building and in the galleries of artworks. Then slowly remove the galleries and the museum building from your image and replace them with parts of the city familiar to you. “Display” the typical interactions you experience or witness in these spaces. Is it a walk around your neighborhood, a trip the store, the people you see on the street everyday? Finally, (re)consider these interactions as a series of interdisciplinary, creative interventions or acts by a range of inhabitants — for Joseph Beuys this is what he called an “expanded notion of art,” an opportunity to question what makes someone an artist or what qualifies as a creative act? This is how I will engage with the city in this column: one large exhibition unfolding throughout the city and over the course of 24 hours, with each day defined by a series of “living sculptures” or encounters — concepts, where people and their interactions constitute a work of art, sort of like a Tino Seghal piece, or this Gilbert and George performance work.

My intention is to channel Tucker and question where the city is (and can be) headed by highlighting, recording, and exploring the contributions of its cultural workers and spaces — a sort of a textual “protest against forgetting”, if you will, to coin the late historian Eric Hobsbwam. This series will showcase some of what Sacramento has to offer creatively. Ideally, it will include a few things that you (and I) might not even know existed. It will not be a list of upcoming events or programs — although I may mention a few. Rather, it will operate as a series of exploratory narratives, shaped by the ongoing conversations, collaborations, questions, and discursive gatherings I participate in as part of my daily practice. Most importantly, this series is an attempt to heed what Chipperfield reminds us of at the end of his essay: “When the idea of the city as something that belongs to everyone is abandoned, then so is the idea of the city itself lost. We need to see the city not as a passive reflection of our predicament, nor as an accumulation and reminder of our past, but as a guide to our shared future.”

The series kicks off properly next week with a story about the Central Valley Chapter of American Institute of Architects and their annual Experience Architecture week. The series will then become a bi-monthly feature.

About the Author: Houghton Kinsman works as the Adult Education Coordinator at the Crocker Art Museum in Sacramento, California. He holds a Master of Fine Art in Art from the University of Cape Town, South Africa and has previously served as assistant to the Curator of Education at the Museum of Contemporary Art, North Miami. His writings have appeared in Art Africa, Contemporary And, Dazed and Confused, Frieze, and Artthrob.

Thursday Nights In: The Personal Element with Curators Jayme Yahr and Christie Hajela

Thursday Night In: Silent Film at the Crocker