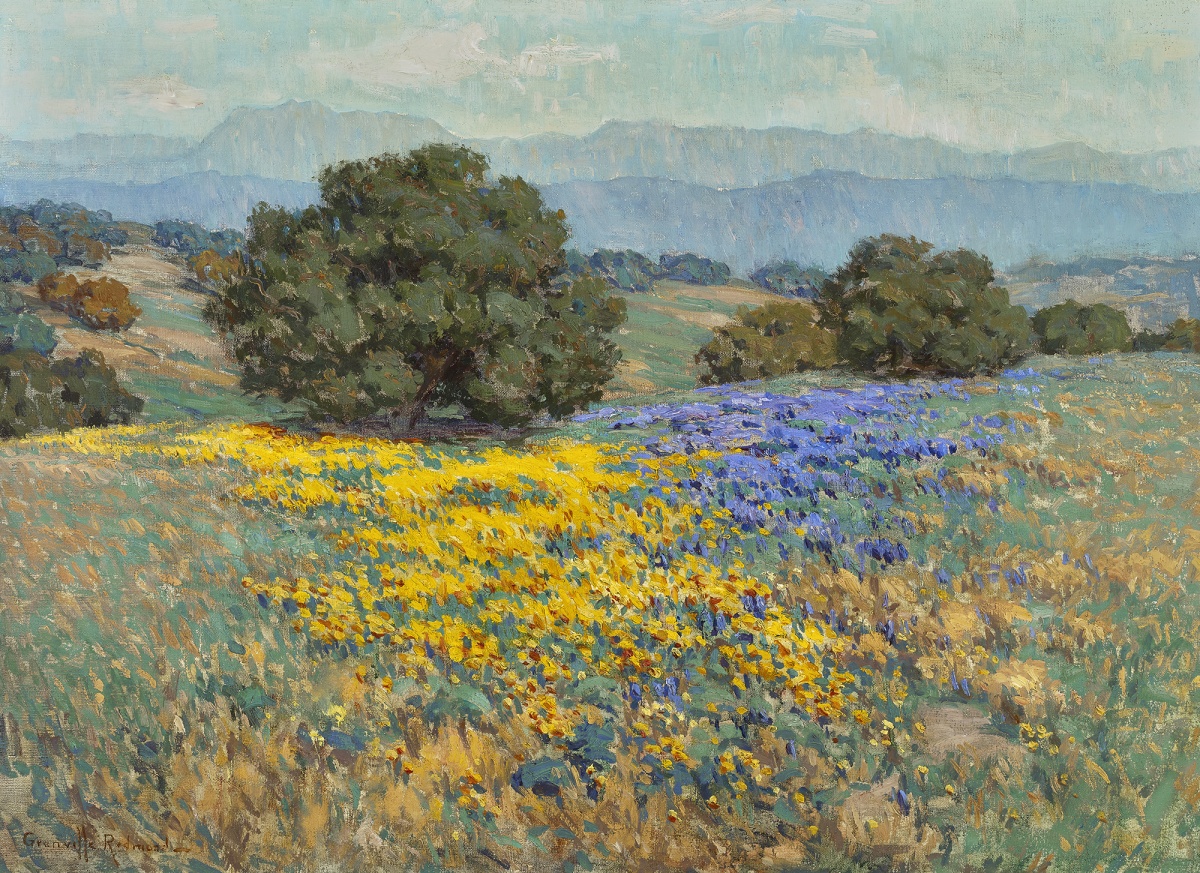 Granville Redmond (1871–1935) produced paintings capturing California’s diverse topography, vegetation, and color. Representing both northern and southern parts of the state, these paintings range from contemplative Tonalist works that evoke a quiet calm, to dramatic and colorful Impressionist scenes. He is best known today for his landscapes ablaze with poppies.

Born in Philadelphia, Redmond contracted scarlet fever as a toddler, which left him permanently deaf. Soon thereafter, his family moved to San Jose, California. In 1879, his parents enrolled him as a boarding student at the California Institution for the Education of the Deaf and Dumb, and the Blind in Berkeley (now California School for the Deaf in Fremont). There, Redmond studied art under painter/photographer Theophilus Hope d’Estrella and sculptor Douglas Tilden. 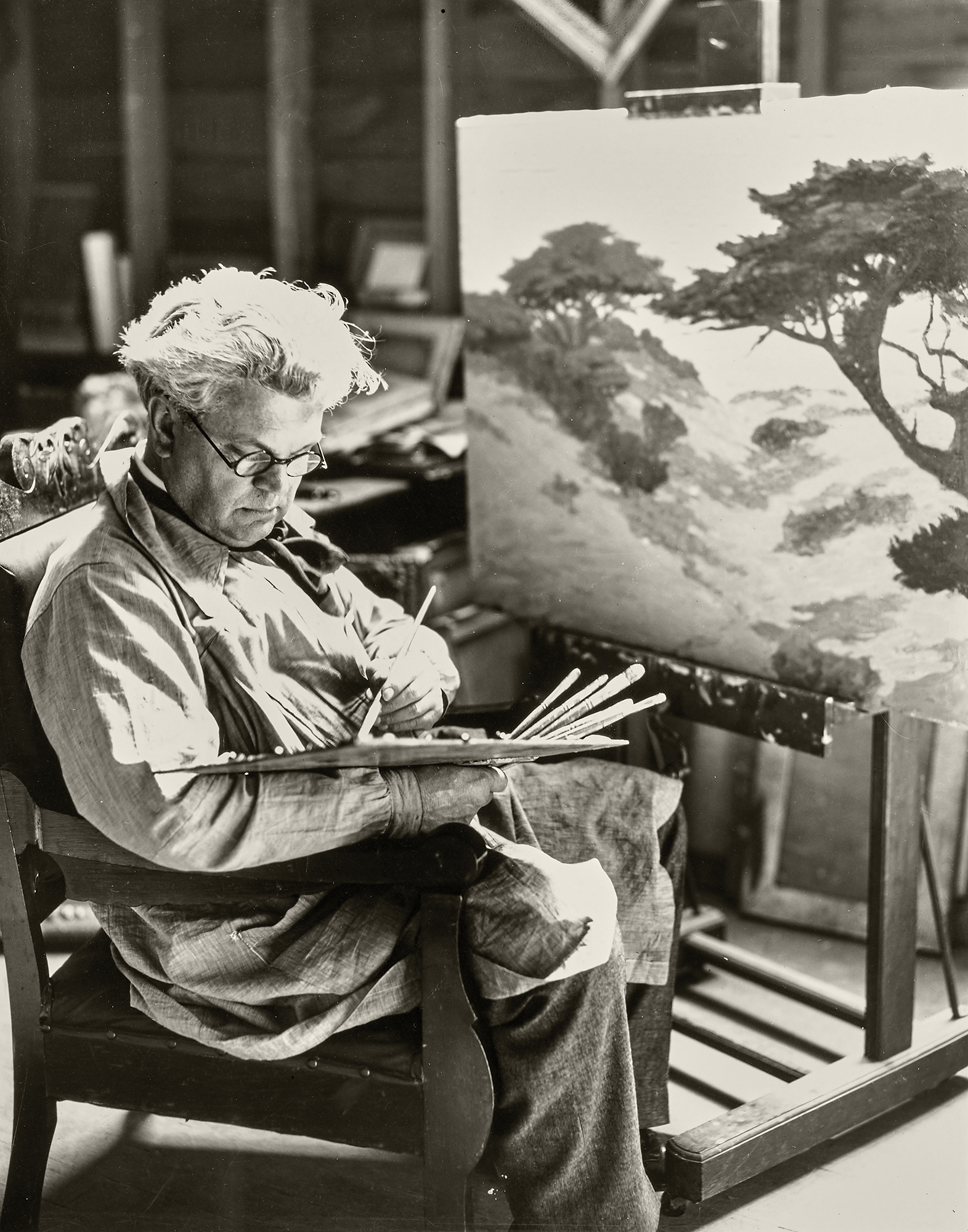 Granville Redmond in His Studio (with Carmel Coast), c. 1917. Collection of Paula and Terry Trotter.

In the late spring and summer of 1889, Redmond began attending summer classes at the California School of Design in San Francisco. He soon enrolled full time, and his instructors included Raymond Dabb Yelland and Arthur Mathews. In 1893, he found inspiration in a new instructor, Ernest Peixotto, who reinforced Redmond’s desire to study abroad.

Redmond realized his ambition that November and began attending the Académie Julian in Paris. The following summer, he set off for the countryside to paint, returning to Paris in the fall to prepare a painting for the Paris Salon, Matin d’hiver [Winter Morning], which was accepted. He would also spend time working near the forest of Fontainebleau, the haunt of Barbizon painters. Poverty forced him to return to California in 1898. 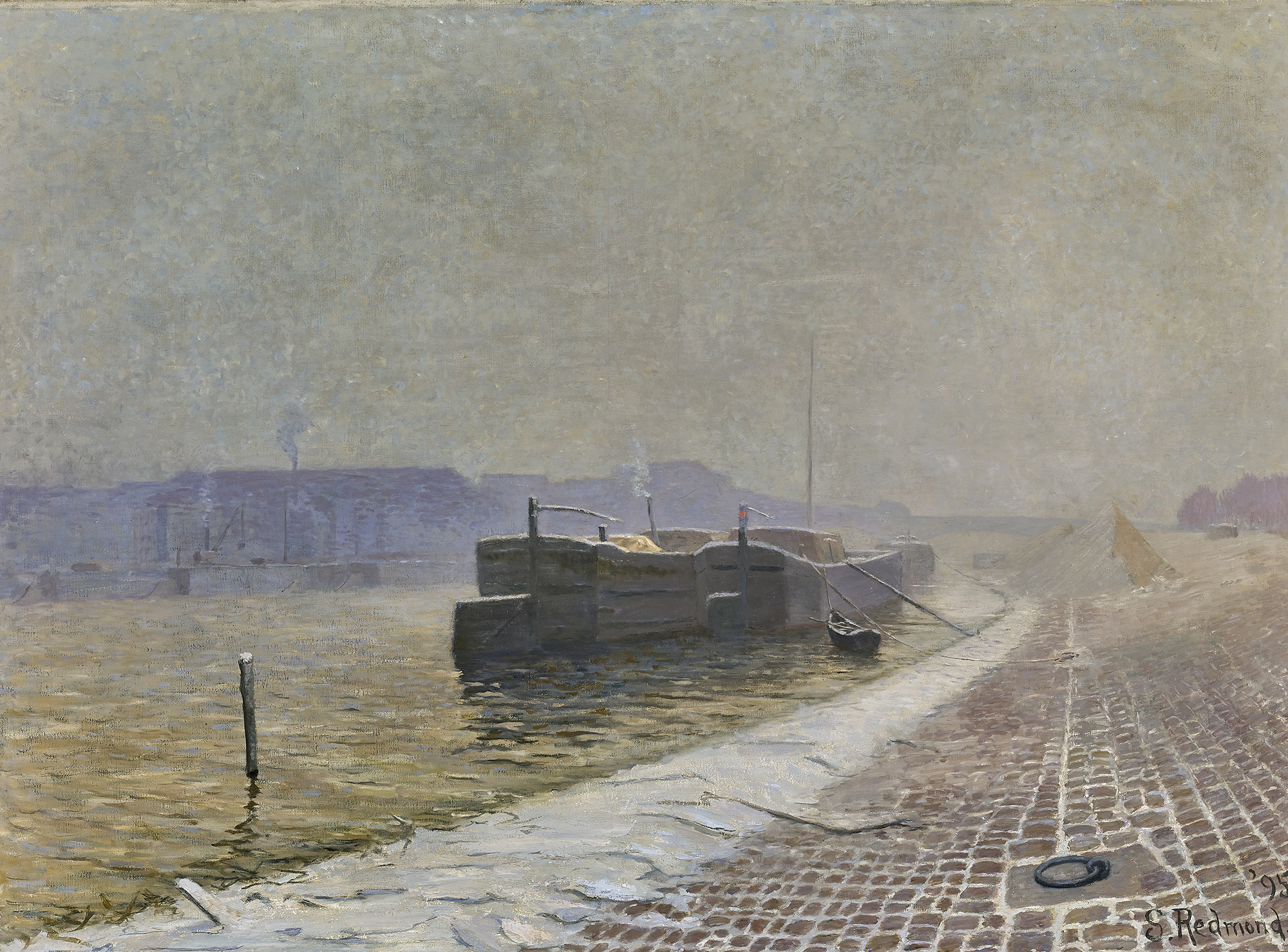 Redmond settled in Los Angeles, where his parents lived. The regional terrain inspired him. “This is a beautiful place,” he wrote. “The scenery excels that of France.” He opened a studio and printed letterhead proclaiming, “GRANVILLE S. REDMOND, ARTIST AND ILLUSTRATOR.” Shortly thereafter, he fell in love and married Carrie Ann Jean of Illinois. The couple ultimately had three children.

Early in his career, Redmond’s paintings tended to be somber in hue, though they would become bolder in color and more Impressionistic in approach. The artist himself preferred Tonalist scenes set at dusk or illuminated by moonlight. “Alas,” he lamented, “people will not buy them. They all seem to want poppies.”

In 1903, Redmond spent the summer in Laguna Beach and Santa Catalina Island. The following year, he exhibited two paintings (California Landscape and California Live Oaks) at the Louisiana Purchase Exposition in St. Louis. En route to Lake Tahoe in 1905, he encountered the beautiful Tassajara Hot Springs area in Monterey County and decided to stay. He returned to the region the following summer. The trips prompted his two-year move to Parkfield, where he had extended family.

The bucolic setting offered Redmond a respite from city life and an abundance of nature from which to paint. His canvases often featured the area’s trees. He subsequently established a studio in Menlo Park, San Mateo County. There, too, he painted trees. 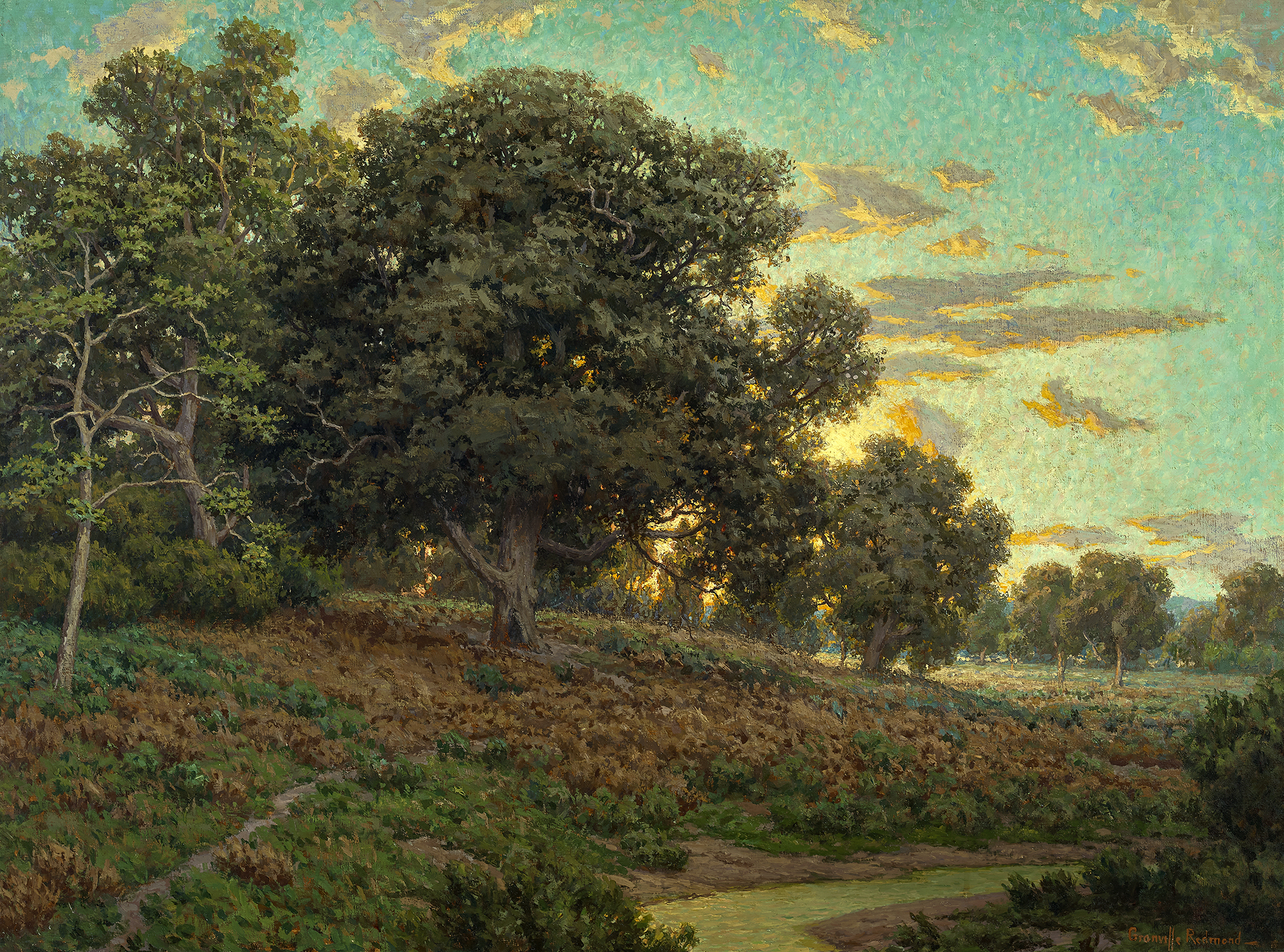 Redmond subsequently spent a year in Belvedere, California, but in September 1917 returned to Los Angeles. Having long been good at pantomime — and because “war conditions had made landscape painting fairly unprofitable” — he decided to test his abilities in Hollywood’s motion-picture industry. He met silent-film star Charlie Chaplin, who ultimately cast him in several minor roles, and he pursued bit parts under other directors. Chaplin greatly admired Redmond’s paintings and even offered him a studio in which to paint. The actor said of his friend’s canvases:

“There’s such a wonderful joyousness about them all. Look at the gladness in that sky, the riot of color in those flowers. Sometimes I think that the silence in which he lives has developed in him some sense, some great capacity for happiness in which we others are lacking.”*

Redmond remained in Los Angeles for the rest of life. His movie schedule was not demanding, which left him ample time to paint. He often worked in Laguna Beach and Catalina Island. He was now well recognized for his sunlit poppy scenes, which sold well through his eldest son Jean, his business manager.


Redmond died in 1935 of a heart ailment at Hollywood Hospital in Los Angeles. He was 64. The paintings he left behind embody two distinct sides of his personality. The introspective, Tonalist works elicit a quiet calm that has much to do with his contemplative nature, his need for solitude, and, perhaps, the silent world in which he lived. The riotous color of his Impressionist paintings, by contrast, suggests that “great capacity for happiness” that Chaplin and others so admired. 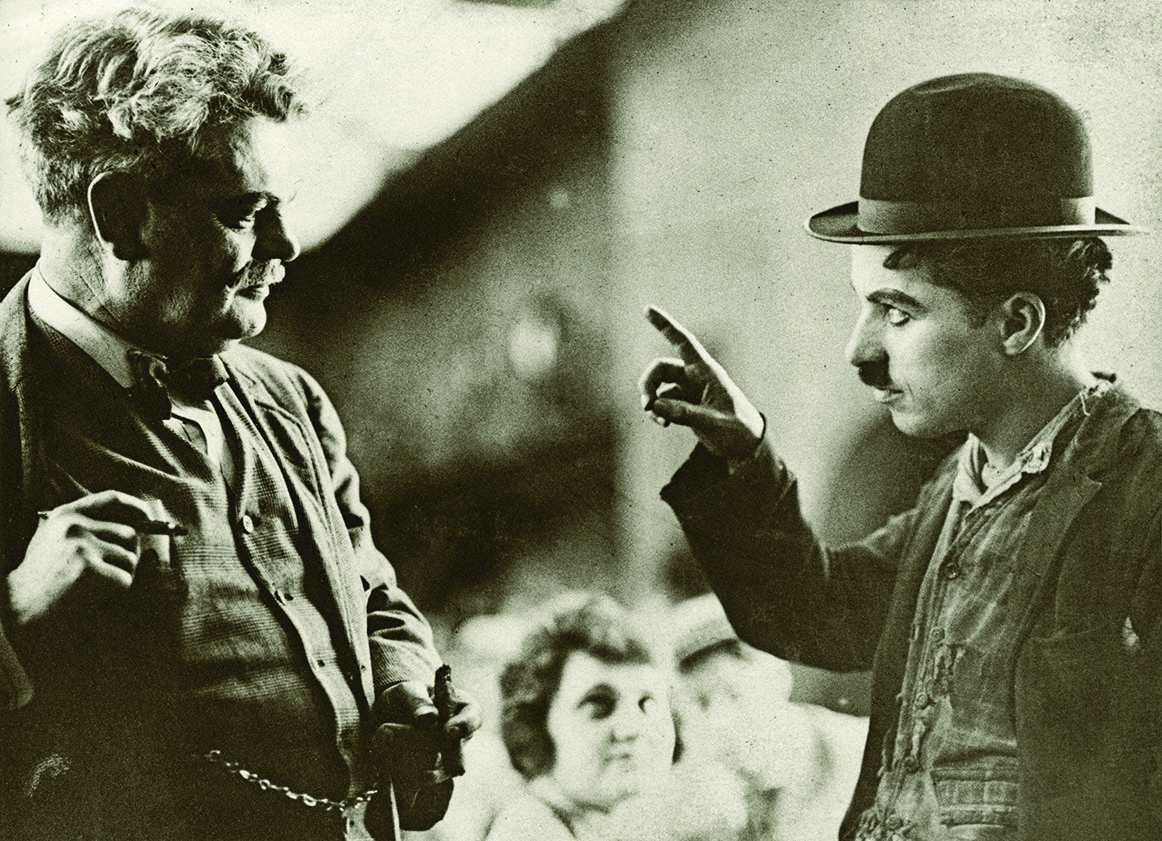 Following its display at the Crocker, Granville Redmond: The Eloquent Palette will travel to the Laguna Art Museum (June 27–September 20, 2020). A richly illustrated color publication written by Scott A. Shields, Ph.D., the exhibition’s curator, and Mildred Albronda accompanies the exhibition.

This exhibition is sponsored by:

Scott A. Shields, Associate Director and Chief Curator at the Crocker Art Museum, holds an MA and PhD in art history from the University of Kansas. He has twenty-five years of museum experience in the Midwest and California. Having curated more than seventy-five exhibitions, he has been the primary or sole author of numerous exhibition catalogues, including Artists at Continent’s End: The Monterey Peninsula Art Colony, 1875–1907; Edgar Payne: The Scenic Journey; A Touch of Blue: Landscapes by Gregory Kondos; Armin Hansen: The Artful Voyage; David Ligare: California Classicist; E. Charlton Fortune: The Colorful Spirit; Richard Diebenkorn: Beginnings, 1942–1955; and Granville Redmond: The Eloquent Palette.