Global Rhythms Is Back! 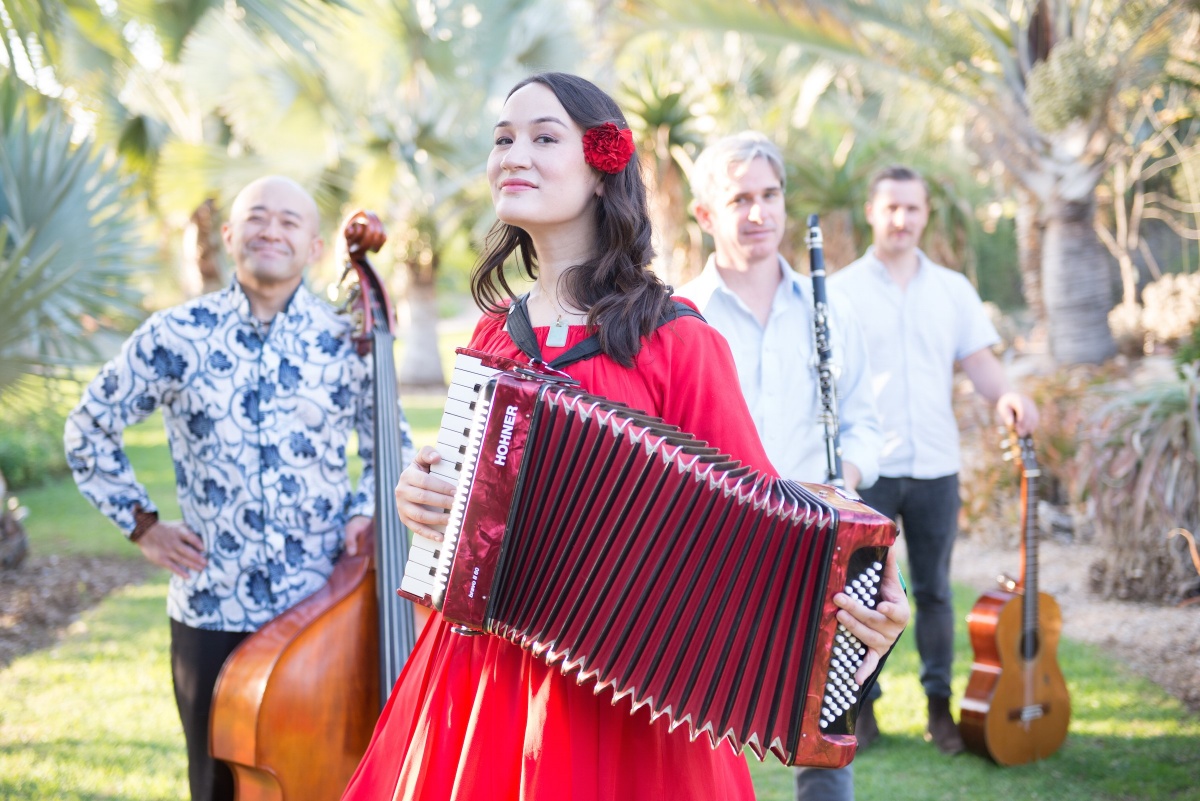 Global Rhythms is back, with sounds and artists from around the world! The fan-favorite world music series features artists whose works transcend cultural divides and unite communities. Each concert is $15 for members or $25 for nonmembers. Members can see all four performances for just $50 with a Member Series Pass!

Apart from Cristiano Ronaldo,fado (“destiny” or “fate”) just might be Portugal’s most successful cultural export. Like all good folk traditions, its origins are unknown — fitting given its melancholic, yearning, and at times spontaneous nature. Fado traditionally inhabits the pubs and cafes of Libson and Coimbra. The haunting songs of love and loss; hope and surrender are accompanied by vibrant guitarras, violas, or base violas. The ritual and music of fado is such a integral part of Portuguese culture that it was added to the UNESCO Intangible Cultural Heritage List, one of the organization's highest honors. Many contemporary artists like Marta Pereira da Costa have built on the tradition of fado by including non-traditional instruments like drums or pianos or by fusing it with other genres.

The former civil engineer is the world’s first and only professional female fado guitarist. In an interview with Providence Journal, she said, “My idea is to take the guitar on a journey of sounds, but the guitar is the connecting link of all tones, be it traditional Portuguese music, jazz, my compositions or my influences,” she said. “It’s as if the Portuguese guitar is the voice for all these sounds.”

When played without a vocal accompaniment the resulting fusion sounds jauntier than the average fado song. Yet a close listen lays bare all the emotions that make fado so captivating. It is unsurprising that her concerts have “not stopped” since her debut album in 2016.

Massamba Diop was a key part of the film Black Panther — the fictional story of Wakandan superhero T’Challa — even though he never appeared on screen. It was his tama or “talking drum” that served as the film's rhythmic backbone and soared above its orchestral and choral arrangements.


The tama is a hourglass-shaped drum that, when played by a master percussionist like Diop, mimics the tone of human speech. Diop leapt onto the world stage as a founding member and the lead percussionist of Daande Lenol, the band of Senegalese superstar Baaba Maal. His work with Baaba has taken him to almost every major venue in the world, including the 2012 London Olympics, Radio City Music Hall, and the Nobel Peace Prize Ceremonies.

Diop has also performed and/or recorded with Carlos Santana, Herbie Hancock, Peter Gabriel, Harry Belafonte, and Stevie Wonder. The award-winning musician has collaborated with American percussionist Tony Vacca and his World Rhythms Ensemble since 1993. When asked about Diop, Vacca said, "First of all, he's playful and ferocious ... all at the same time. He's playful as in, 'Let's go!' And ferocious as in, 'You can't keep up, you're in the dust!'" Massamba's work with Edgardo Cambon and Bobby Wallace in The Father Time Trio is a celebration of powerful percussion and cultural creativity.

Special thanks to Akinsanya Kambon, whose bequest, recommendation, and friendship made this concert possible.

Los Angeles-based songwriter Jessica Fichot is a lot like her hometown of Paris; staunchly French, but international at heart. The artist draws from a dizzying array of musical traditions — Shanghai jazz, gypsy swing, and international folk — to create delicate and alluring 21st-century chansons. The accordion-wielding, toy-piano playing chanteuse’s songs are accompanied by a group of equally talented musicians from around the world (clarinet/sax, upright bass and guitar).


Fichot is acutely aware of her heritage — in her case French and Chinese — and its impact on her music. Like many self-described "mixed" individuals, she “only wanted to play and write American music” (Santa Barbara Independent, 2017). It was only after she moved to Los Angeles that she embraced the language and music of her childhood.

In 2014 she took a “musical equivalent of an extended vacation” and put out an EP that captured the sounds of early 20th-century shidaiqu. In a conversation with the Santa Barbara Independent she explains, “It was not just about me singing Chinese songs. There were a lot of similarities between the music that influenced my French chanson and this music from Shanghai.” (Fichot’s instrument of choice, the accordion, shows up in both genres.)

The musician’s infectiously cheerful music has won the hearts of audiences and critics around the world. The L.A. Times called her music a “glittering testament to L.A.’s multiculturism”, while the L.A. Weekly hailed it as “enchantingly original”. The sentiment was shared by the San Francisco Chronicle who described it as a “cosmic cabaret, a delicious blend of acoustic styles delivered with syncopated verve by her quartet".

We’re closing out the Global Rhythms series with Audiopharmacy, an eclectic hip hop ensemble with members from all over the world. Its current touring members come from Pomo Indian, African American, Pilipinx, Fijian-Indian, European and Chinese Tibetan Buddhist roots.


The ensemble performance fuses live instrumentation, turntablism, electronics, poetry, and technical lyrics into sounds that stir, heal, revive and “always speaks the language of the people”. The groups have toured extensively throughout the West Coast and taken stage at festivals and concerts halls around the world. The group even toured Southeast Asia and the Pacific as part of the U.S. State Department’s “American Music Abroad” program, a partnership with American Voices.

The band's rich blend of genres defies any one categorization. They are, in short, not just a musical collaboration; they're cultural phenomenon.