Gerald Stone’s Vision at the Crossroads 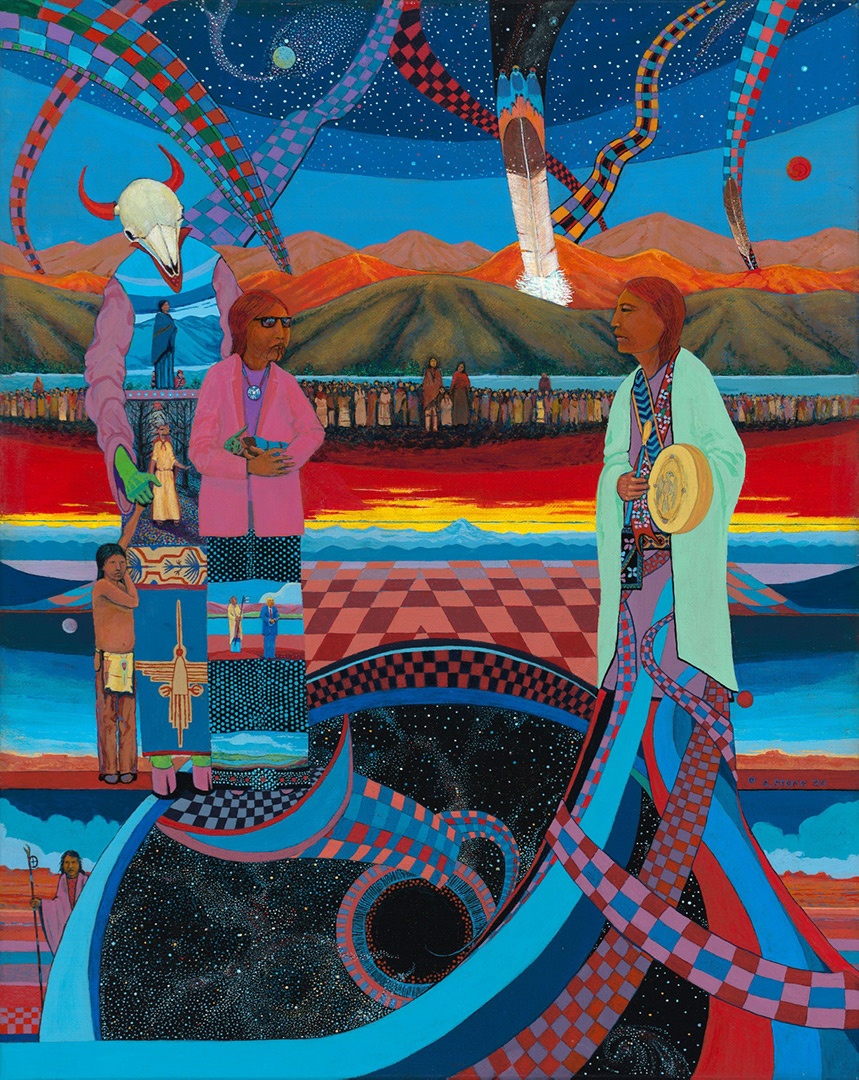 Multiple Horizons, Crocker's current Student & Community show creates space for the local Cultural Arts community to share their perspectives on the cultural landscape of the Sacramento region, inviting the viewer to reflect on their own relationship to the ancestral Nisenan territory the Museum was built on. In collaboration with concept: art + movement, an incubator of Arts and Culture El Dorado, the exhibit features California Indian, Native American, and Indigenous artists, community, and youth.


The Shingle Springs Band of Miwok Indians Exhibits and Collections Department would like to thank ally Professor Nicolas Rosenthal for his dedicated advocacy of regional Tribal artists. In 2020 Prof. Rosenthal presented “Coyote Traveling: California Indian Artists at Home and Abroad, 1960’s to 2000’s” at The Spirit of Pacific Western Traders Native Art Symposium, highlighting the international trajectory of Nisenan Maidu artist and SSBMI Tribal Member Harry Fonseca (1946-2006). The Exhibits and Collections Department is pleased to continue the collaboration with Prof. Rosenthal and present an excerpt of his piece on the beloved local master artist Gerald Stone, featured in the upcoming Lolmĕn Publication, the Multiple Horizons exhibition catalog.


Seminole and Cherokee artist Gerald Stone’s painting Crossroads (2020) is a fitting title image for Multiple Horizons: Native Perspectives at the Crossroads, a community exhibition presented by the Shingle Springs Band of Miwok Indians. As part of the unceded, ancestral lands of the Nisenan people, Sacramento has long been a gathering place for both tribal members throughout the region and Indigenous peoples from across the continent. This is one reason that contemporary artists like Stone have found it a vibrant place to live and work. Born in Konawa, Oklahoma, in 1949, Stone shaped his artistic sensibilities in the Native art centers of New Mexico and Oklahoma, then after a long pause revived his career in California. His journey as an artist illustrates the Native arts movement of the past sixty years, with the Sacramento region as one of its critical sites. Stone’s life and work also demonstrate how the city’s cultural landscape has been and continues to be shaped by the diverse Indigenous community that comes together at the crossroads.


Stone first studied art at the Institute of American Indian Arts (IAIA) in Santa Fe, a city often considered the center of the Native art world. Beginning with a two-year, postgraduate program, IAIA assembled Native students from throughout the country for a wide-ranging arts education, enabling them to explore Native identity and culture in its complexity. Stone applied and received an acceptance letter just days before he had planned to join the US military, then enrolled and arrived on campus in the fall of 1965. Lacking formal art experience and daunted by the accomplishments of the faculty and other students, Stone did his best to soak up the arts school atmosphere as he took classes in basic art principles, art history, and studio art. He would return to the classroom afterhours to examine the work of his instructors and classmates, and experimented in the methods of Abstract Expressionism while completing his own canvases.

An exhibition walkthrough with members of the community

Following his IAIA studies, Stone attended Oklahoma’s Northeastern University, then transferred to the University of Oklahoma and earned a Bachelor of Fine Arts. While working full-time in construction and supporting a family, Stone painted at night, sold his work through galleries, and entered juried competitions. Moving from the Abstract Expressionism of his IAIA years to more representational yet stylized work, Stone invoked Native peoples and cultures while often revising dominant narratives of the region’s history.

Stone relocated in the early 1990s to the Sacramento area, where several institutions anchored a thriving Native arts scene. Artists like Frank LaPena (Wintu), Harry Fonseca (Nisenan Maidu), Jean LaMarr (Paiute-Pit River), George Longfish (Seneca), Brian Tripp (Karuk) and others were both active in the region and international figures who brought perspectives shaped in California to the world of Native art. Stone was planning a solo exhibition at Pacific Western Traders (PWT) in Folsom when he was involved in a serious car accident, after which he lost the urge to create. For more than a decade he was limited to working in a sketchbook, then finally the need for a more sustained artistic outlet returned and he began to paint again. In 2009 his long-planned solo exhibition sold out, then he continued to show and compete in juried competitions. Today Stone works from his home in the Sacramento area, exhibits in Santa Fe, sells paintings and prints to collectors through Facebook, and can sometimes be found staffing a booth at local markets and festivals. 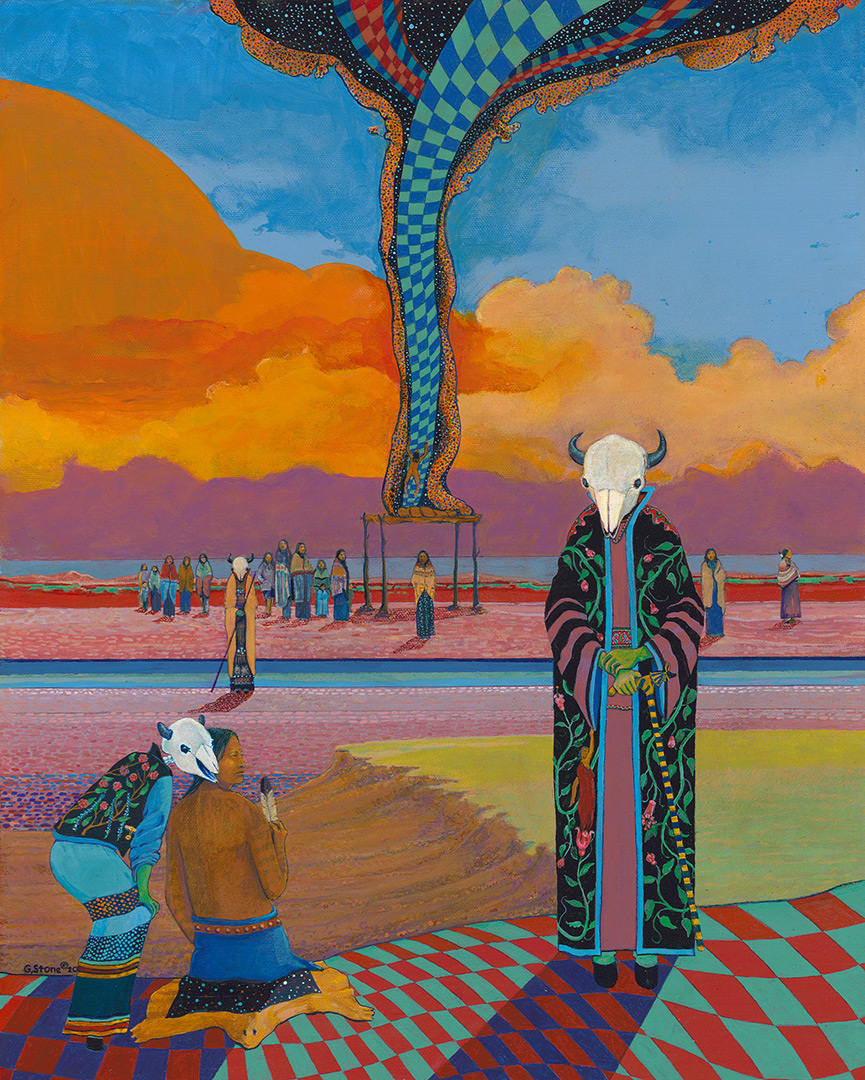 Crossroads (top image) serves as an exemplar of Stone’s mature work, honed over decades of life experience and immersion in the places that make up the Native art world, painstakingly produced over months of dedicated labor. It is visually arresting and multi-layered, featuring detailed and methodical brushwork, vibrant color, and dynamic movement. As described by Stone, it is set in the time of the people’s exodus from their home world and located at a crossroads, or nexus, a point accessed by advanced life forms to travel between worlds. They are helped by Watchers, "skulled people" that Stone has reinterpreted from Judeo-Christian traditions:


The Watchers know that it is time for humanity to find a new home as imminent disasters long foretold have arrived. They have summoned the Red-Haired Giants to call and gather those who will listen. The gatherings guided by the Giants and Watchers access the Nexuses to travel to a new home world.

A diversity of Native culture is reflected through the figures, such as a man engaged in a Sun Dance ritual, images of Nazca Lines and Deer Woman adorning the Watcher’s clothing, and Seminole designs on the sash and bandoliers of the male Giant. This is combined with broad-ranging cultural references that include an IAIA pendant, Baby Yoda, and handcuffed Donald Trump. Themes of multiple worlds, prophecies and ignored warnings, Native cosmology, and the fluidity of time and place run throughout Stone’s recent work, immersing the viewer in compositions that are both poignantly relevant and slyly whimsical. 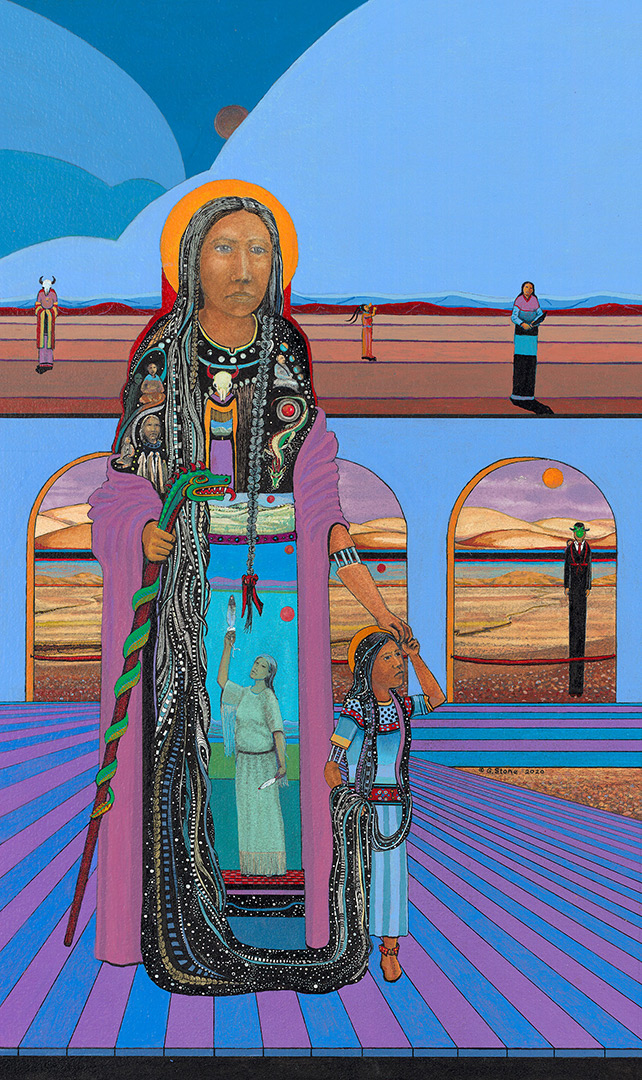 Works like Crossroads, in addition to Bull Durham (2020) and Sad Eyed-Sisters of the Old Lands (2020), both included in the exhibition, are increasingly being recognized as those of an innovative, master artist. Multiple Horizons allows the public a critical pathway into Stone’s vision.

About the Author: Nicolas G. Rosenthal is Associate Professor of History at Loyola Marymount University and the author of Reimagining Indian Country: Native American Migration and Identity in Twentieth-Century Los Angeles (University of North Carolina Press, 2012). He is currently at work on a book project titled “Painting Native America: Indigenous Artists in the Twentieth-Century,” a portion of which was published as “A Critical Site: American Indian Art in California, 1960s-1980s,” in the catalog for the Crocker Art Museum’s 2019 exhibition, When I Remember I See Red: American Indian Art and Activism in California .