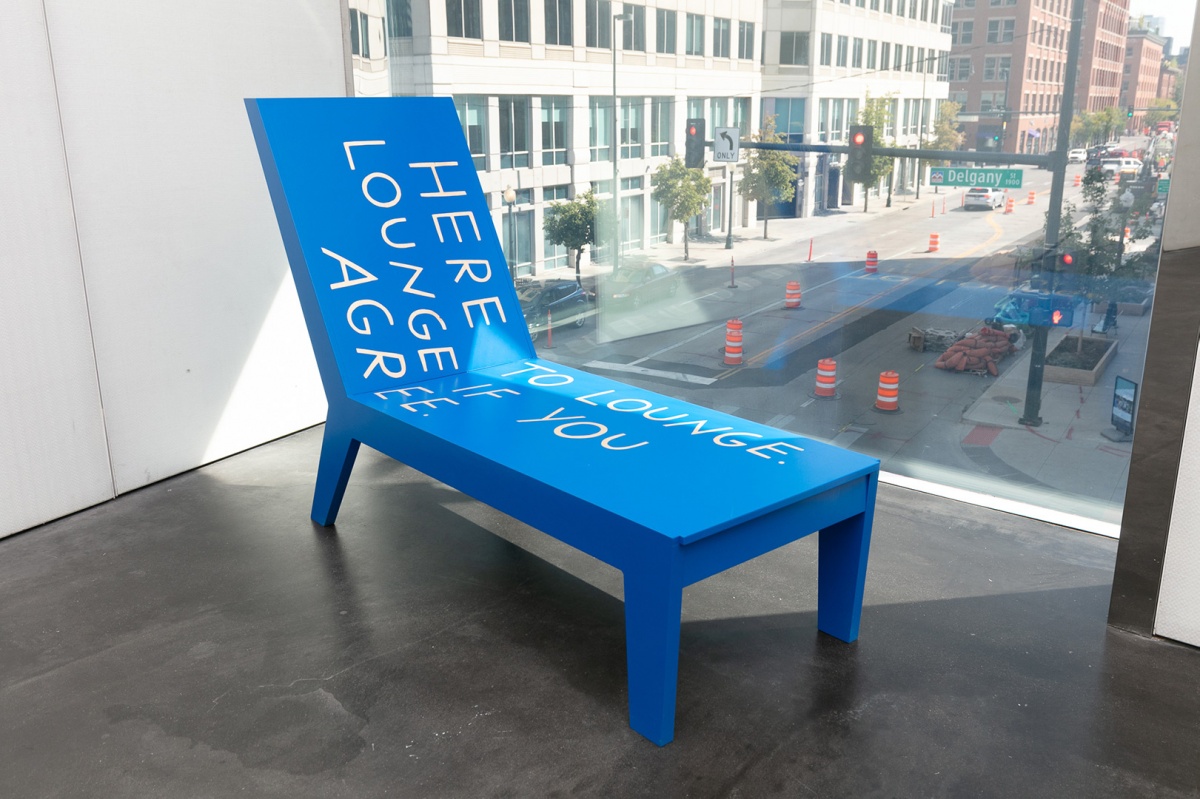 Shannon Finnegan is a disabled artist based in New York who makes work about access. I first visited their studio when they were a resident at Eyebeam in Brooklyn more than a year ago. The underlying premise of their work is that access is something that you — yes you — can do, and are responsible for. For instance, in an ongoing series of workshops that Finnegan lead with Bojana Coklyat titled Alt-Text as Poetry, they teach, discuss, and research best practices for describing artworks and images online. These descriptions, when associated with an online image, are known as alt text; they are primarily used by blind and low vision people. Finnegan and Coklyat’s work on alt text is significant because, as design historian Aimi Hamraie pointed out when they interviewed Finnegan in Art in America — the magazine I work for — we are all producing content and sharing images online. Therefore, we are all responsible for making our own content accessible. Recently, the artists turned their workshops into a workbook, available in print, as an audiobook, and as an e-book. These different forms allow many types of participation, accommodating numerous access needs, financial situations, or geographic locations.

Finnegan reiterates all of their projects in numerous forms, adjusting them to various contexts and for various bodies. In so doing, they emulate the responsive and adaptable spirit that is absolutely central to access. In the spirit of Conceptual Art, they abandon the ableist notion that an artwork must be fixed to one single form, and instead prioritize the idea the work is intended to communicate. Finnegan’s series Do you want us here or not began in 2018 with a bench in painters-tape blue that reads, "I’D RATHER BE SITTING. SIT IF YOU AGREE." The text is inscribed in their signature handwritten letters. The following year, for a group exhibition in Estonia curated by Christine Sun Kim and Niels Van Tomme, they made cushions instead of benches. While the original was meant to point out the absence of seating in many exhibition spaces, the Tallinn Art Hall had a fair amount of seating. Finnegan decided to soften the existing chairs with cushions that read things like, "IT WAS HARD TO GET HERE. REST IF YOU AGREE," in English, Estonian, and Russian. In a 2020 group exhibition at the Museum of Contemporary Art in Denver, the series reached its apotheosis in the form of ten pieces of furniture — benches, stools, a chaise lounge — providing places of rest throughout a large group exhibition. The benches provided support for viewers while looking at other artworks.

For Finnegan’s projects, there is no one single, ideal way to experience the work. Instead, modes of entry are distributed across numerous forms and contexts.

Finnegan conceptually and formally responds to the context of a specific space. It is often simpler, and more cost effective, for fabricators to create new works on site instead of shipping large, heavy benches around the world. Finnegan thwarts the conventional notion of maintaining an attachment to an original. This is a crucial component of making an artwork accessible: Often, ideas and aesthetic experiences need to be translated across forms — from image to description, from sounds to captions — in order to accommodate diverse access needs. But for Finnegan’s projects, there is no one single, ideal way to experience the work. Instead, modes of entry are distributed across numerous forms and contexts.

Likewise, their Anti-Stairs Club Lounge project — which began at Wassaic Project in upstate New York in 2017 — has morphed into myriad mediums. The first iteration took place in Wassaic’s historic, seven-floor, elevator-less building. Pondering if and how they could make work in an inaccessible space, Finnegan decided to make a lounge on the ground floor. It had a keypad entry, and in order to get the access code, visitors were asked to sign a piece of paper promising that they would not go up the stairs. The lounge became an exclusive space for those staying on the ground floor, whether out of necessity or in solidarity. Anti-Stairs Club Lounge caricatures the luxury exclusivity of spaces like airport lounges, and creates community among those who are excluded.

In 2019, the project took the form of a protest at Thomas Heatherwick’s Vessel, a hive-shaped structure comprising staircases, in New York City’s Hudson Yards. “While Vessel does have an elevator,” Finnegan writes on their website, “the elevator is not an equitable means to experience the structure.” The artist passed out pledges to dozens of disabled people and their allies that read “As long as I live, I will not go up a single step of the Vessel.” The pledges asked for participants’ signatures. Finnegan also created a newspaper-like version of Kevin Gotkin’s 2018 Avery Review essay, “Stair Worship: Heatherwick’s Vessel,” which critiqued the structure’s ableist aesthetic. When participants unfolded the essay, the phrase “Anti-Stairs Club Lounge” was printed in large letters on the back — a semi-covert strategy for bringing protest signs into a privately-owned public space, where constitutional rights are not guaranteed. To help identify the protestors as a group, Finnegan created orange beanies and blue baseball caps embroidered with crossed-out stair symbols. 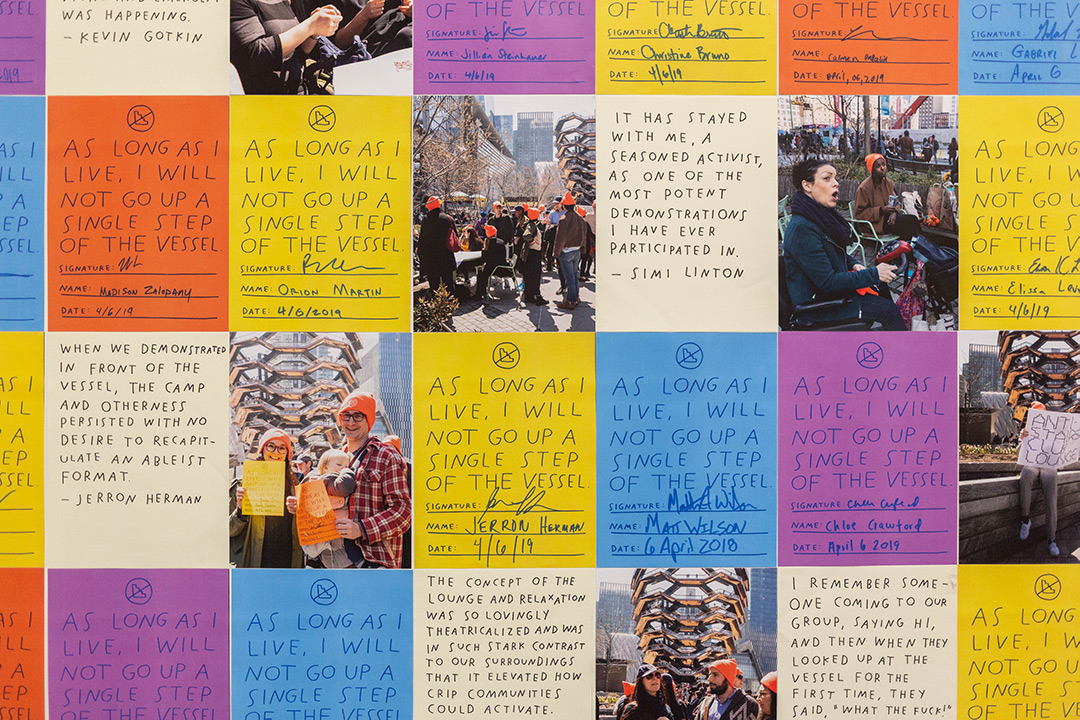 In a recent exhibition at Onomatopee Projects in the Netherlands, Finnegan showed the work using a grid of photos from the Vessel intervention, as well as copies of various participants’ pledges. The grid also included quotes from participants who discuss their memories of the event — written, again, in the artist’s signature handwriting. Meanwhile, original hats were displayed in a vitrine. There was, of course, also seating, with cushions that boasted the anti-stairs symbol. You can still buy hats from Finnegan on the condition that you also sign the Vessel agreement. Their work astutely combines straightforward and actionable messages with complex formal critiques of art world conventions.

In this accessible sort of formal fluidity, Finnegan is not alone. The multimedia talents of Berlin-based writer, musician, and artist Johanna Hedva make them well suited to create “different points of entry”, as Hedva put it to me when I interviewed them this summer. They describe the “the shape-shifting-ness" of their works, which morph between writing, sound, and performance, as “the blood and spit and bone... rather than an afterthought or ill-fitting exoskeleton.” Hedva captures live performances with written essays. For example, their 2013 performance Odyssey Odyssey, an adaptation of Homer’s play inside of a Honda Odyssey, was turned into an essay for their latest book, Minerva and the Miscarriage of the Brain (Sming Sming and Wolfman, 2020). When they make music, they describe all of their sounds — a practice often used for d/Deaf access — but not in a straightforward, dry way. Instead, their music descriptions are poetic. For instance, in a 2020 soundtrack-based solo exhibition at Klosterruine Berlin, they described their own voice in one track as “like a family of ghosts”. In the process, one might argue, they create a new piece of writing altogether.

Finnegan and Hedva illustrate important lessons about access: First, it requires a spirit of adaptability and flexibility. Second, it is never finished; it is a constant negotiation, open to input. These works are constantly changing and evolving to accommodate different audiences, different spaces, and different contexts. Neither say, "This one form is my vision, take it or leave it." Instead, they try to meet their audience wherever they might be.

Top Image: A wooden chaise lounge with the phrase "HERE TO LOUNGE. LOUNGE IF YOU AGREE" written on the body. Credit line: View of the exhibition Citizenship: A Practice of Society showing a work from Shannon Finnegan’s series Do You Want us Here or Not, 2018—. Photo Wes Magyar.

About the Author: Emily Watlington is a critic, curator, and assistant editor at Art in America.

The Crocker strives to provide inclusive and equitable experiences for all. Learn more HERE. If you want to see more supports for our programs such as closed captioning, ASL translation, and image descriptions, let us know by emailing education@crockerartmuseum.org, and consider making a donation.

Increasing Accessibility at the Crocker: Art on the Spectrum