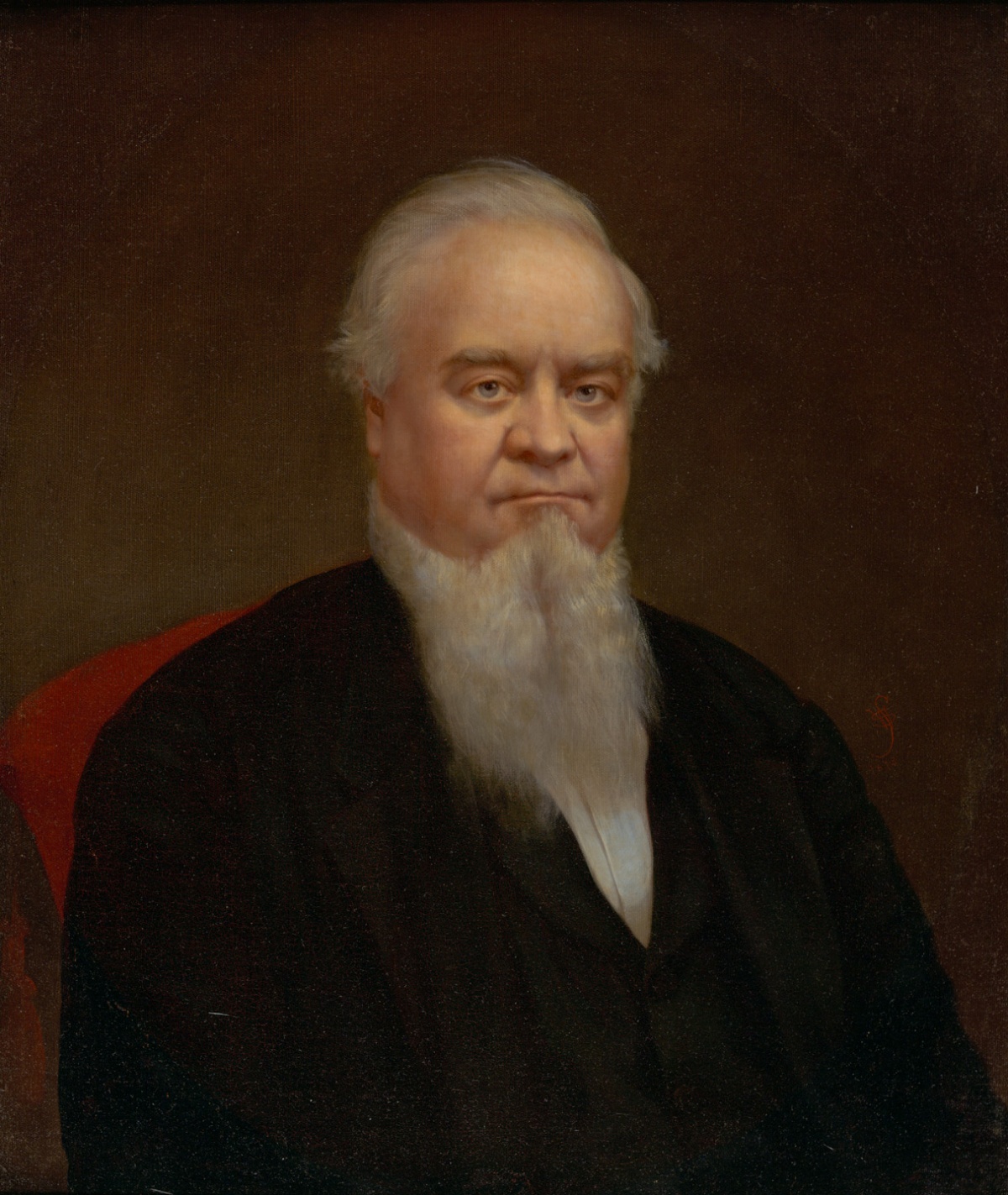 Leland Stanford stood over what soon be the First Transcontinental Railroad, hemmed in by a crowd of jubilant workers, railroad officials, and two imposing locomotives. A telegraph wire ran from the silver maul in his hands to a single railroad spike. Millions of dollars, almost two decades of work, and an inconceivable amount of human suffering had led to this moment. Stanford grasped the maul and swung.

A cheer erupted from the spectators, as the message went out to cities across the United States: The First Transcontinental Railroad was complete. The project was daunting — even by modern standards. Three railroad companies, including the Central Pacific Railroad, had carved 1,912 miles of continuous railroad track through a fledgling nation. For the first time, goods and passengers could travel from New York to California quickly and efficiently. A trip that once took 10 months now took six days.

A quiet but powerful sound also rang out that day: the “ka-chink” of Andrew Russell’s camera. The image — a mob of celebratory men, crowded between two locomotives — captured the nation’s zeitgeist and imagination. But the picture didn’t tell the whole story. 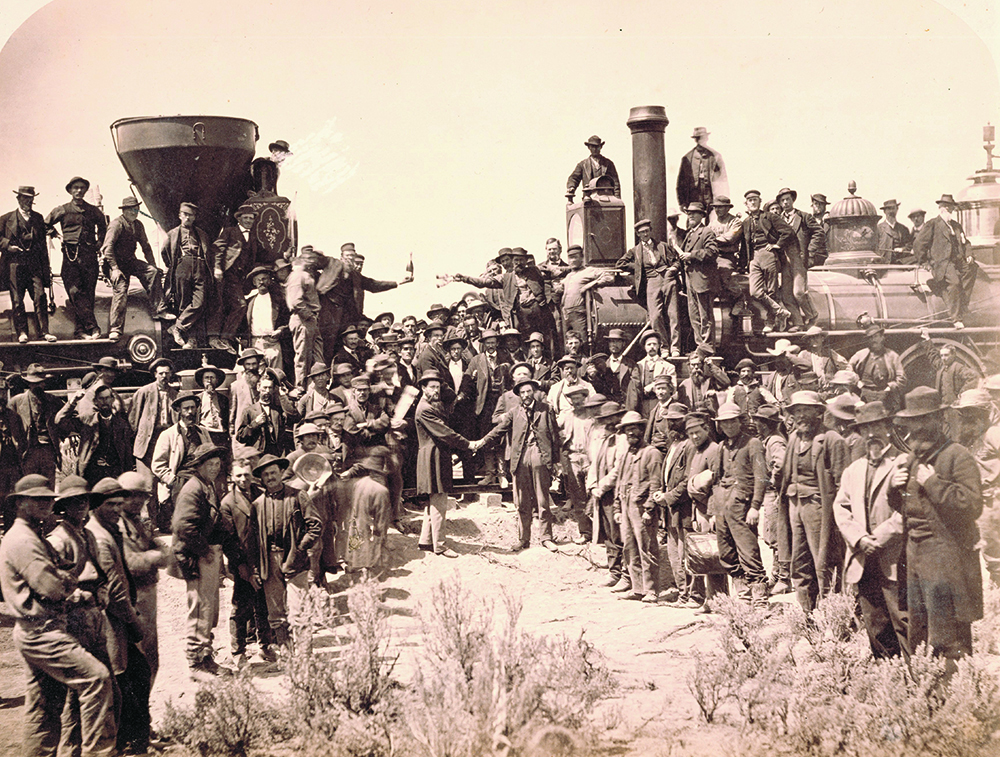 It didn’t show the company of soldiers sent to maintain order. It didn’t capture the predominately Chinese and Irish workforce who worked in squalid, unsafe conditions. It certainly didn’t show the native inhabitants of the previously “untamed wilderness”. In fact, many of the project’s architects, including Edwin Bryant Crocker, weren’t even in the picture.

Edwin Crocker’s exclusion from the photo can hardly be considered unjust. Nonetheless, his impact on the project makes his absence from the picture — and by extension history — even more noteworthy.

E. B. Crocker was born into a relatively humble New York merchant family and eventually moved to Indiana, where he became an attorney. In the 1840s his first wife passed away, and E. B.’s grief — paired with the success of his younger brothers in California — prompted him to move to Sacramento in 1852, with his new wife, Margaret Eleanor Rhodes, in tow.

Edwin resumed his legal career upon arriving and by 1854 was the chair of the newly formed Republican Party. In 1863, Governor Stanford appointed him to State Supreme Court. E. B.'s tenure was brief but productive. In just seven months, he wrote a record 237 opinions. Fellow Justice John Currey later wrote: “It was his habit to take to his chambers a lunch basket, in order to save himself the hour usually set apart as the time for luncheon.” After his term ended, E. B. became the Central Pacific Railroad’s attorney and member of its board of directors.


“The man who had genius, who had the brains to work, and had the cunning and was really entitled to the credit of getting the thing through, was Judge [E. B.] Crocker … He was a man of very clear head and very keen intellect, and much greater ability than Charley Crocker.”

His zealous work ethic served the Central Pacific Railroad well. He managed corporate acquisitions, dealt with local governments, served as a principal adviser, and handled legal disputes. Edwin also supervised public relations and kept track of the railroad’s progress. It was these latter duties that led him to employ the project’s photographers, Andrew Russell and Alfred Hart.

E. B. sent thousands of pictures to his partner Collis Huntington. Huntington had little interest in the photo’s aesthetic nature. He wanted incontrovertible proof of progress to show investors. E. B., on the other hand, appreciated the sophistication of images — particularly Hart’s. Edwin. wanted images that were as big and dramatic as the railroad itself. It was an unusual move, given the medium’s infancy. However, it was hardly a usual move for E. B., who had long supported the arts.

Edwin’s contribution to the First Transcontinental Railroad has largely been forgotten, despite his influential role. Fredrick Low, the former Governor of California, noted, “The man who had genius, who had the brains to work, and had the cunning and was really entitled to the credit of getting the thing through, was Judge [E. B.] Crocker … He was a man of very clear head and very keen intellect, and much greater ability than Charley Crocker.”


"His Name Is Cut into Our Mountains"

Alas, tragedy struck E. B. again. In June of 1869, he suffered a stroke that left him partially paralyzed and unable to work. He decided to pursue other interests, which mostly consisted of purchasing and preserving European and Californian art. During this time, he commissioned an art gallery and embarked on a grand tour of Europe with his family in 1869.

The family (and their mountain of artwork) returned to Sacramento in 1871. The collection, like the couple, was remarkably forward-thinking. It contained a meretriciously selected collection of Master drawings and German paintings. (The former didn’t gain widespread acceptance until the early 20th century.) The collection was eventually installed in the Crockers’ gallery. Unfortunately, Edwin didn’t get to enjoy his collection for very long.


E. B. passed in 1875. The city he helped build heaped praise upon him. The Sacramento Daily Union wrote, “His name will never fade from the bright place it occupies in the annals of this City, to which he was so devoted, nor from the history of his adopted State, where he achieved success and honor.” Similarly, the noted C.G.W. French said, “Judge Crocker will not need a monumental shaft to perpetuate his memory – his name is inscribed on the iron lines over the broad fields of California; it is cut in our mountains – it is imprinted on the everlasting rocks, and there it will remain forever.”

Today, Edwin’s contributions to the railroad have been largely forgotten. However, his legacy was carried on by his wife, Margaret, who, in 1885, gifted the Crocker Art Gallery and its collection to the city of Sacramento in a deed of trust, fulfilling her husband’s wish to establish a center of culture in California.

About the Author: Brian Hendershot serves as the Crocker's primary support editor, writer, and occasional audiovisual editor. Before joining the Crocker, he was the Head of Communications at the Museum of the Red River in Oklahoma. He also sat on the McCurtain County Historical Board of Directors and currently sits on the Crocker's MASS Action Committee. He received his MA in Communications at Drury University in Missouri.

Additional information was provided by The Crocker Art Museum Collection: Unveiled and Iron Muse: Photographing the Transcontinental Railroad. Both books are available in the Museum Store. Finally, special thanks to Chuck Spinks of the California State Railroad Museum for his fantastic and enlightening presentation.