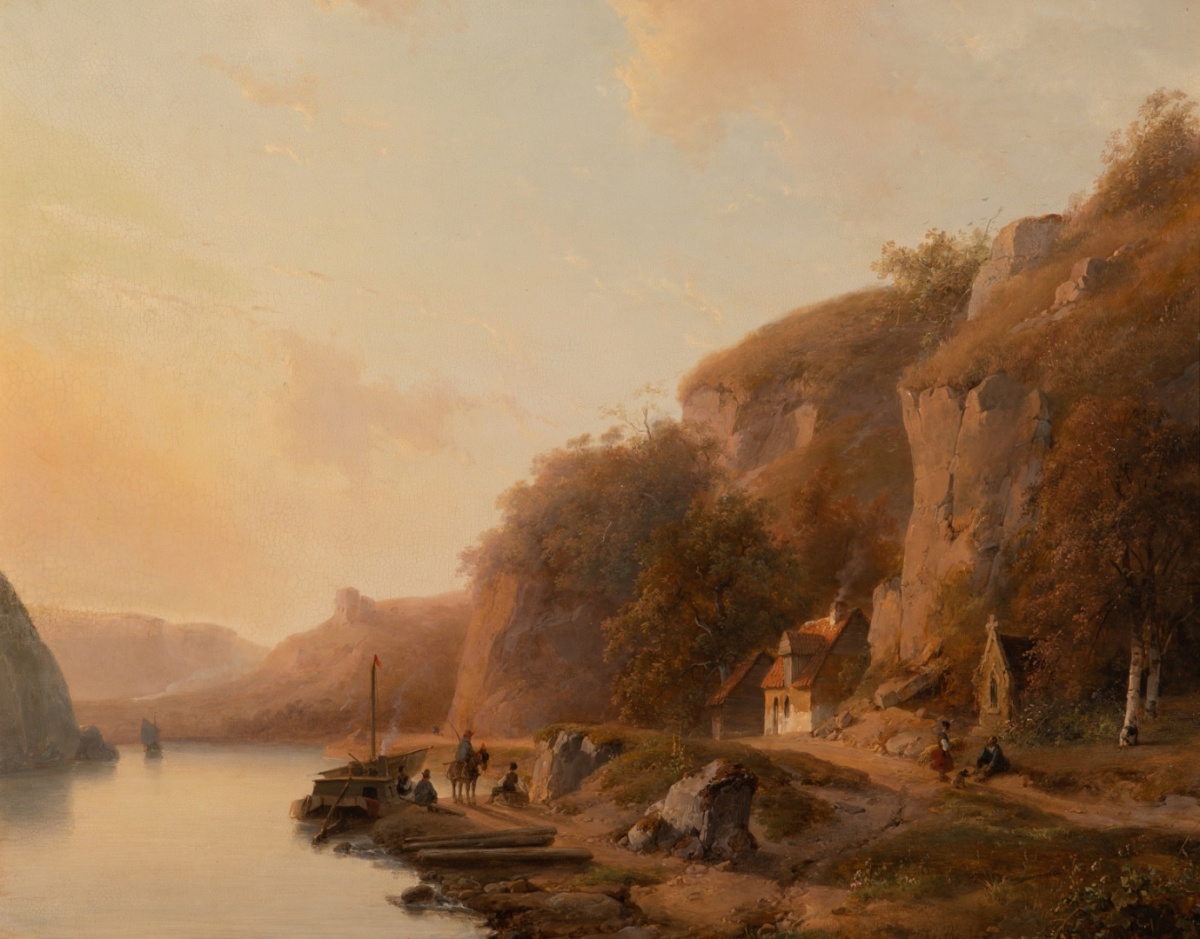 
In the 19th-century Netherlands, painters took inspiration from the lively artistic world of the age of Rembrandt two centuries earlier. As the country sought a national culture after 50 years of upheaval (beginning with the French invasion of 1795 and ending with peace with Belgium in 1839), artists sought to emphasize the perceived virtues of Dutch people and culture through peaceful landscapes, bustling city views, and scenes of merchant ships.


Unlike its counterparts in Germany or France, Dutch Romanticism was not associated with high passion and dramatic vistas, but rather with the restrained exploration of emotional warmth and beauty. Scenes were composed for a specific effect, often achieved in combination with imagined elements and highly finished brushwork. Nostalgia for traditional life in a rapidly industrializing society, the relationship between humanity and the sea, and the intimacy of farm and peasant life were all themes of Dutch Romantic art.

Among the Dutch Romantics, Andreas Schelfhout was one of the most popular, known for his farming landscapes and winter scenes. In this example, Schelfhout sets the scene along a rock-lined river, perhaps in Limburg with its rolling hills and shallow gorges (top image). A house and chapel are nestled under the rocks above, while one boat is docked to receive goods and another plies the river beyond. The people calmly go about their business or, as at right, chat by the roadside. The congenial atmosphere is heightened by the pleasant glow of the midday sun. The most dramatic romantic paintings depict the Dutch reliance on the sea, the source of the country’s wealth but also a dangerous adversary (below). Ary Pleijsier, a specialist in marine painting, shows seamen coming ashore on a small boat in rough water. Behind them at left, a ship has foundered on rocks, with men awaiting rescue. A third vessel at right rides the waves with difficulty as it tries for shore. 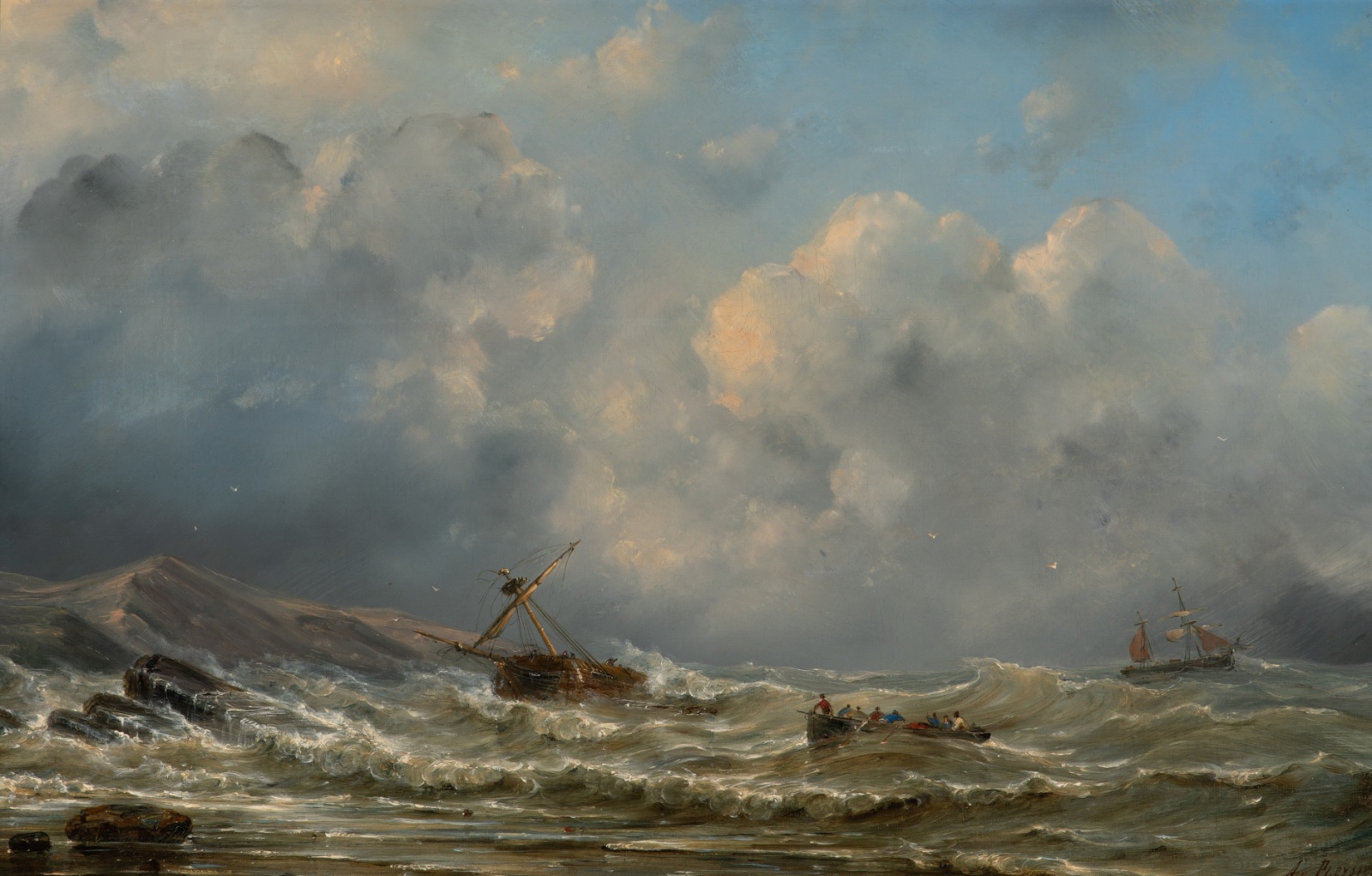 Later in the century, Dutch artists looked toward a more realistic view of nature and their surroundings. After working with Barbizon painters such as Théodore Rousseau in France during the 1850s, many Dutch painters brought a new unpretentiousness to their native landscape, along with a preference for a tonal palette and loose brushwork. Working out of doors to better capture light effects, many of these artists gathered in the countryside village of Oosterbeek, a vacation spot for wealthy patrons. Some artists, on the other hand, used the new tonal mode to depict the coast and the life of the sea. In the 1870s, the opportunities offered by the Dutch political capital, the Hague, attracted artists to the city. With associations of artists such as Pictura and Pulchri Studio, it was a fertile ground for the exchange of ideas and provided a ready market for their paintings. Soon they were known as the Hague School painters.

Perhaps the most famous of these artists was Hendrik Mesdag, a marine painter enchanted by the Hague’s seaside district of Scheveningen, identified here by the SCH on the sails of the boat (below). A realist, Mesdag depicts an everyday scene with a fishing boat drawn up on shore to unload the day’s catch. From the left foreground, the tracks of the cart furrow the sand all the way to the side of the boat where it awaits its haul. Women gather on the shoreline to inspect the merchandise as well. Mesdag’s restricted palette is shared by Jacob Maris’s city scene (below). The canal, the houses that line it, and the canal boat at left are all depicted in shades of brown and gray. Passersby and workmen crossing the central bridge are shown with just a few strokes of the brush, while the river and distant buildings are nearly abstract. 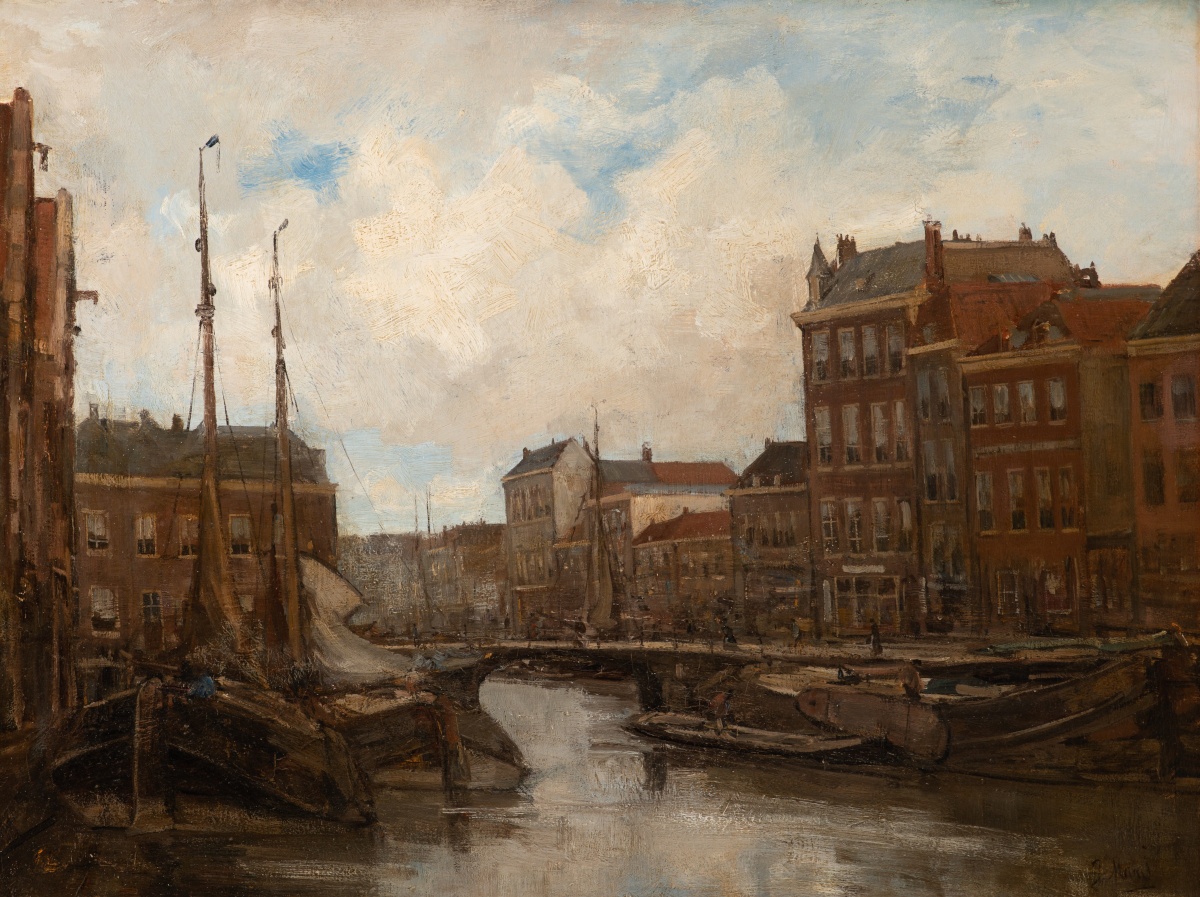 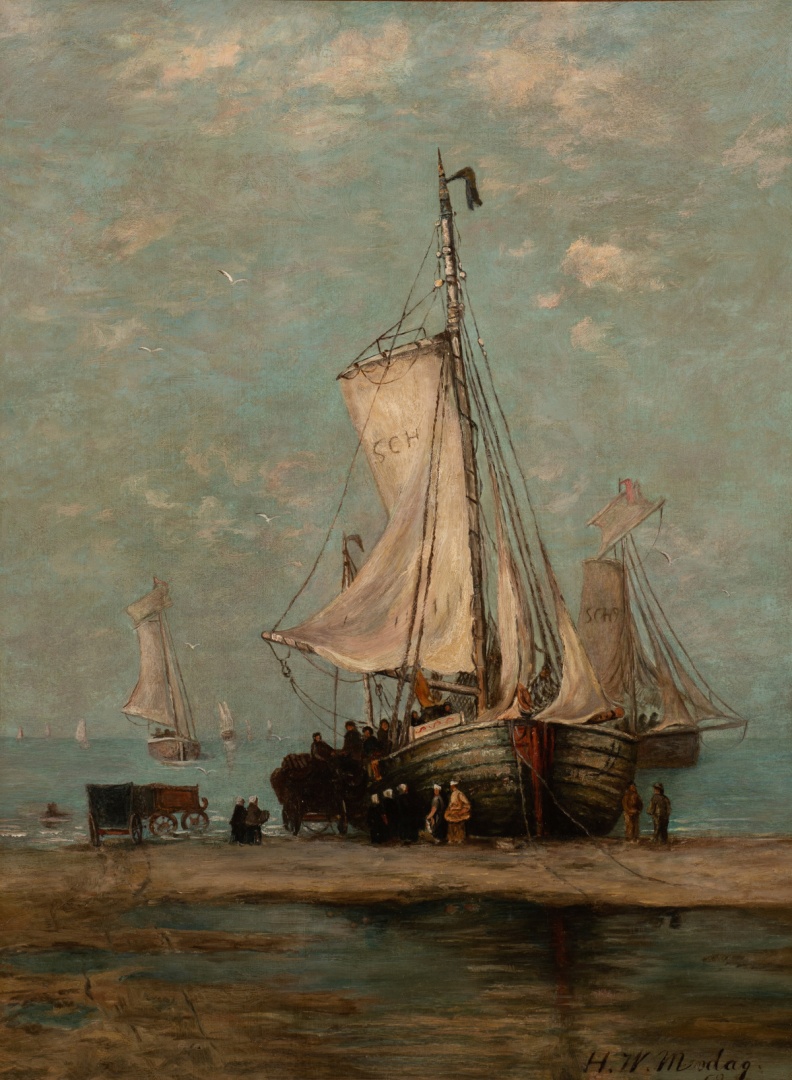 The 50 paintings in this exhibition range from the earliest Dutch Romantics to the second-generation Hague School artists, spanning from the 1830s to the 1910s. They are selected from a gift of paintings that recently came to the Crocker from the late G. Jan Beekhuis and his wife Mary Ann, who had already made possible the Museum’s Beekhuis Foundation Gallery in 2010. With the final gift of the Beekhuis Collection, the Crocker becomes a rich center for the study of 19th-century Dutch art.


Country, City, and Sea: Dutch Romantic and Hague School Paintings from the Beekhuis Gift closes May 2. Click HERE to see more works from the exhibition.

About the Author: Trained at the National Gallery of Art, the Metropolitan Museum of Art, and the Philadelphia Museum of Art, Crocker Art Museum Curator William Breazeale is the organizer of many exhibitions including The Language of the Nude: Four Centuries of Drawing the Human Body, A Pioneering Collection: Master Drawings from the Crocker Art Museum, and Reuniting the Masters: European Drawings from West Coast Collections. With a Ph.D. from the University of Maryland and a dissertation on Italian sketchbooks, he is the author of articles for Master Drawings including "Old Masters in Old California: The Origins of the Drawings Collection at the Crocker Art Museum," "Nature and a new drawing by Otto Marseus van Schrieck," and "Two Small Heads by Giulio Romano in the collection of the Crocker Art Museum." In addition to coordinating major exhibition catalogues, he has organized exhibitions on Italian paintings and European and American prints for the Crocker, as well as serving as coordinating curator for many loan exhibitions hosted at the Museum, including 2015's The Age of Albrecht Dürer: German Drawings from the École des Beaux-Arts, Paris.