Arthur Mathews was a painter, muralist, illustrator, architect, teacher, publisher, and craftsman. His wife Lucia was equally talented, a Renaissance woman in her own right. Together with businessman and art patron John Zeile, the three partnered in establishing the Furniture Shop and created what is today known as the California Decorative Style in painting and furniture-making.

The California Decorative Style combined elements of European Art Nouveau, American Arts and Crafts, and Classical antiquity, juxtaposed with California trees, flowers, produce, and locales. Recently, the Crocker Art Museum received an important donation of Furniture Shop pieces from the Dorothy Riedy Zeile Trust Estate, a collection that has been in the Zeile family for some 100 years.

Born in Markesan, Wisconsin, Mathews came to California with his family as a child. As a teen, he worked in his father’s architectural office, but enrolled at the California School of Design to study painting. In 1885, he went to Paris to train at the Académie Julian. Upon his return to San Francisco in 1889, he began teaching at the California School of Design and soon became the school’s director. One of his most promising students was Lucia Kleinhans, whom he married in 1894.

When the 1906 earthquake and resulting fires destroyed the school and ended Arthur Mathews’ teaching career, he and Lucia teamed up with John Zeile to establish the Furniture Shop. Housed in a Mathews-designed building erected on the former site of Zeile’s home, the shop produced carved and painted furniture, picture frames, and other decorative pieces.

The Furniture Shop grew to employ as many as 50 craftspeople. Mathews’ former student Thomas McGlynn served as chief designer and assistant. Lucia supervised furniture decoration and carving and produced original handcrafted objects of her own. Many pieces were a result of Arthur and Lucia’s collaboration, as writer Porter Garnett explained in a 1912 issue of the San Francisco Call, “Some of the most elaborate of these pieces have been recently completed. One, a desk, was designed by Mr. Mathews and some of the ornamentation is also his work. The piece also contains a number of panels in inlay and carving, the work of Mrs. Mathews.”

In creating the Furniture Shop, the Mathewses looked to the example of designers and tastemakers in America and abroad. The ultimate aesthetic source for their endeavor was William Morris, father of the Arts-and-Crafts movement in England. Morris’ own business, Morris & Co., produced finely crafted and often elaborately painted products inspired by medieval prototypes, archaizing in design and appearance. Morris’s painted furniture, laden with figurative and floral decoration, inspired many pieces coming out of the Furniture Shop.

Instead of turning to the medieval past to inform their production, however, the Mathewses generally focused on Classical antiquity. Doing so at this time seemed appropriate, as many Californians compared the state’s landscape to the pastoral settings of ancient Greece and Rome. Furniture Shop designs often included architectural elements such as columns, friezed entablatures and pediments, and painted decorations frequently included figures in Classical poses and garb, though there were generally hints of Asia and other cultures as well. Such exoticism seemed peculiarly Californian when combined with leaves, boughs, and silhouettes of local trees and wildflowers, most notably the California poppy. 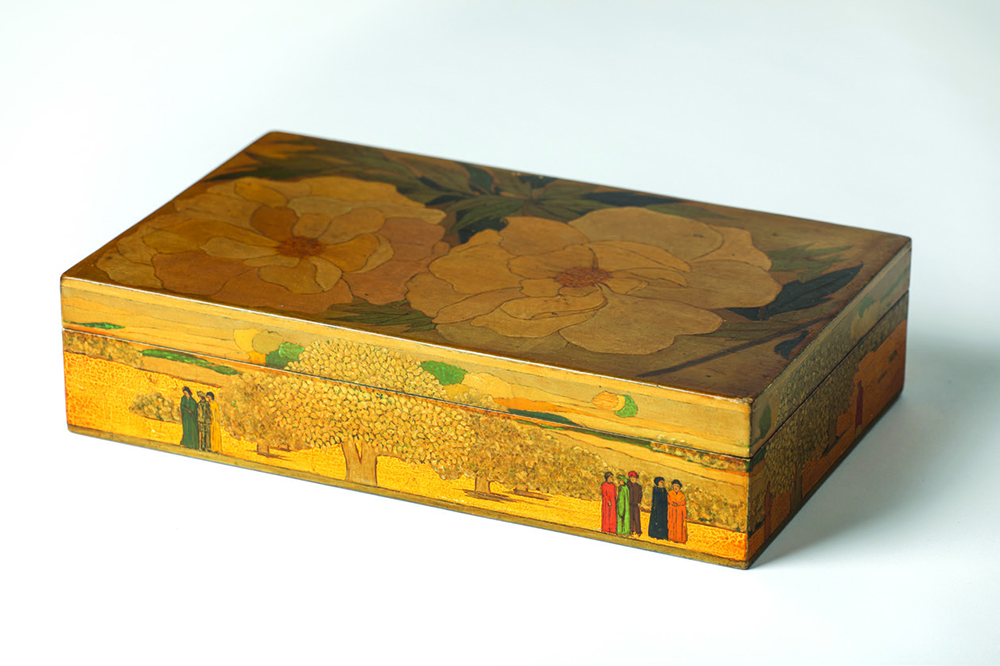 The carved and painted furniture, frames, and decorative objects recently donated to the Crocker feature many of these signature elements. Smaller items include carved and painted urns, an ornately painted vase and box, carved candlesticks, and three heavily carved frames, all with paintings by William Keith, a well-known Californian artist who for a time maintained a studio at the Furniture Shop building. The collection also includes a library table and hall cabinet with poppies, and a bed ornamented with figures. An extraordinary blanket chest bears a lid painted by Arthur, with male and female nudes, animal emblems of the Four Evangelists (Matthew, Mark, Luke, and John), and symbols of the zodiac. The chest’s side panels are Lucia’s work, portraying colorfully dressed figures in a setting of flowering trees.

As Garnett declared more than 100 years ago, “Indeed, the Mathewses are producing a type of furniture so distinctive that one can readily imagine the collector of the future classing it as the California school of the early 20th century.” Pieces in the Zeile family collection make it clear that Garnett was right.