Chiura Obata (小圃千浦, 1885–1975) was born Zoroku Sato in Okayama, Japan. In 1899, at age 14, he ran away to Tokyo to pursue his studies in art and adopted the name “Chiura,” referring to the scenic “thousand bays” on the coast near Sendai, where he had lived with his older artist brother (who was also his adoptive father).

Obata immigrated to the United States in 1903 and embarked on a seven-decade career, emerging as a leading figure in the Northern California art scene. He was an influential educator for more than 20 years and acted as founding director of art schools in two Japanese concentration camps during World War II. 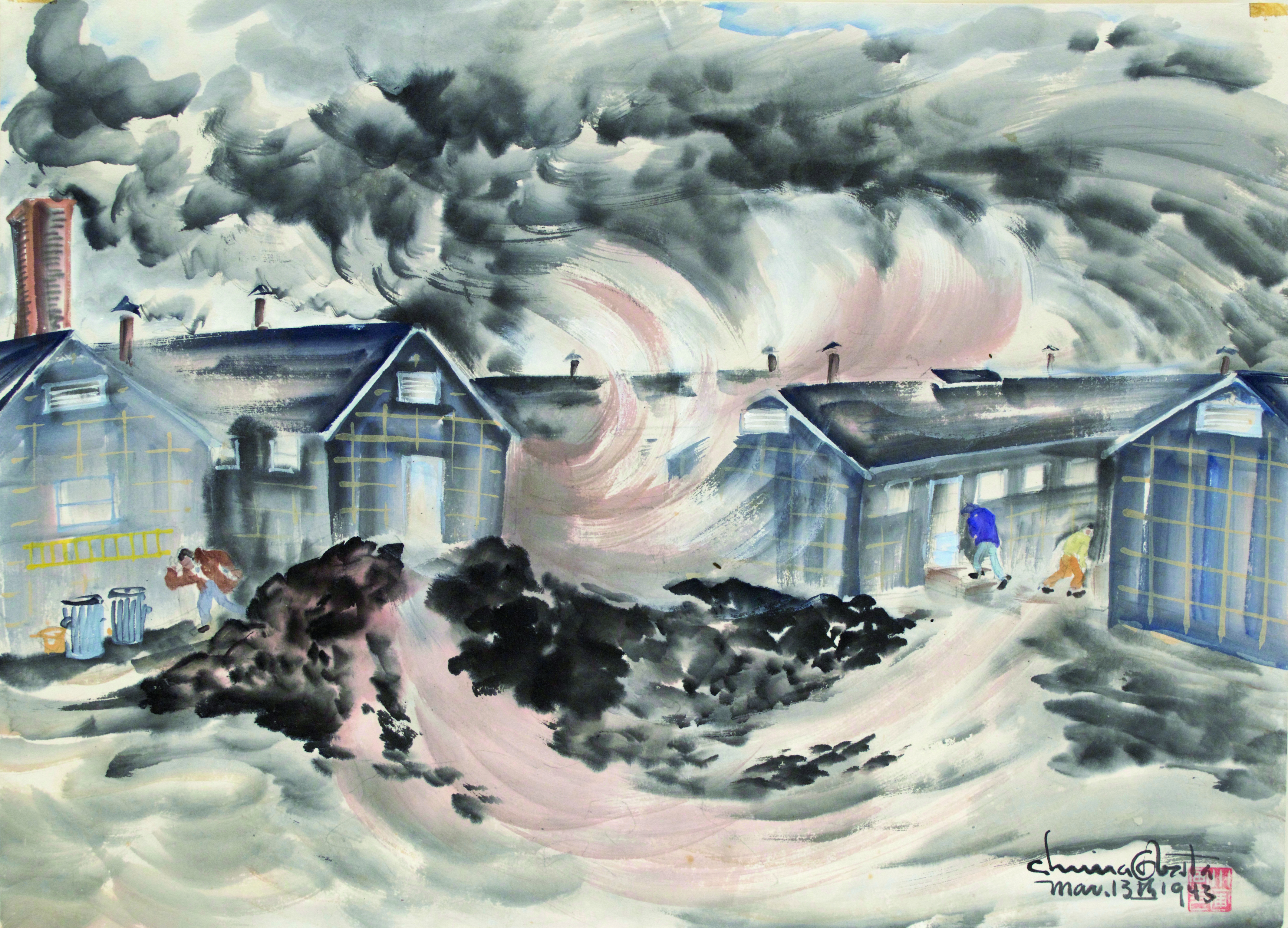 Chiura Obata: An American Modern offers an expansive survey of the artist’s rich and varied body of work and includes approximately 100 paintings, drawings, prints, and personal items — many of which have never been on public display. Drawing from both private and public collections, this retrospective showcases works from every decade of the artist’s career, ranging from his nihonga (Japanese-style painting) studies as a student in Japan and watercolors from his days as an artist-reporter in San Francisco, to his well-recognized woodblock prints, ink scrolls, and large-scale California landscapes.

Obata’s early magazine and newspaper illustrations evidence his engagement with international art movements and foretell the intense and productive cross-cultural negotiations that shaped his life and work. “Obata arrived in the U.S. as a young painter trained in both traditional and modern Japanese art,” writes exhibition curator ShiPu Wang. “Immersed in California’s vibrant artistic milieu, Obata explored not only evolving Japanese painting techniques, but also Arts and Crafts ideology and style, as well as the continuing relevance of plein-air nature painting.” Obata found enduring inspiration in California’s rich and diverse landscape. His initial years in the Golden State may have included a brief period working in the Sacramento Valley’s fields, which he referenced in a large scroll painting of a fiery sunset above an expansive horizon (above). In 1927, he took a month-long sketching tour of Yosemite National Park with fellow artists Worth Ryder (1884–1960) and Robert B. Howard (1896–1983), and produced more than 150 paintings as a result.

Obata began teaching in the art department at University of California, Berkeley, in 1932 and retired there in 1954. Although his career as an artist and educator were ultimately marked by great success, his experience as an immigrant was not without challenges. The U.S. Immigration Act of 1917 and Asian Exclusion Act of 1924 fueled xenophobic sentiments, which intensified after the Japanese attack on Pearl Harbor. In 1942, President Franklin D. Roosevelt authorized the incarceration of approximately 120,000 Japanese Americans. Obata and his family were detained at the Tanforan Assembly Center in San Bruno, California, and later moved to the Topaz War Relocation Center in Utah. A disciplined artist, Obata nevertheless continued his work, and many of his ink drawings document the displacement of Japanese Americans. These works and his writings were later published by his granddaughter, Kimi Kodani Hill, in Topaz Moon: Chiura Obata’s Art of the Internment (2000). 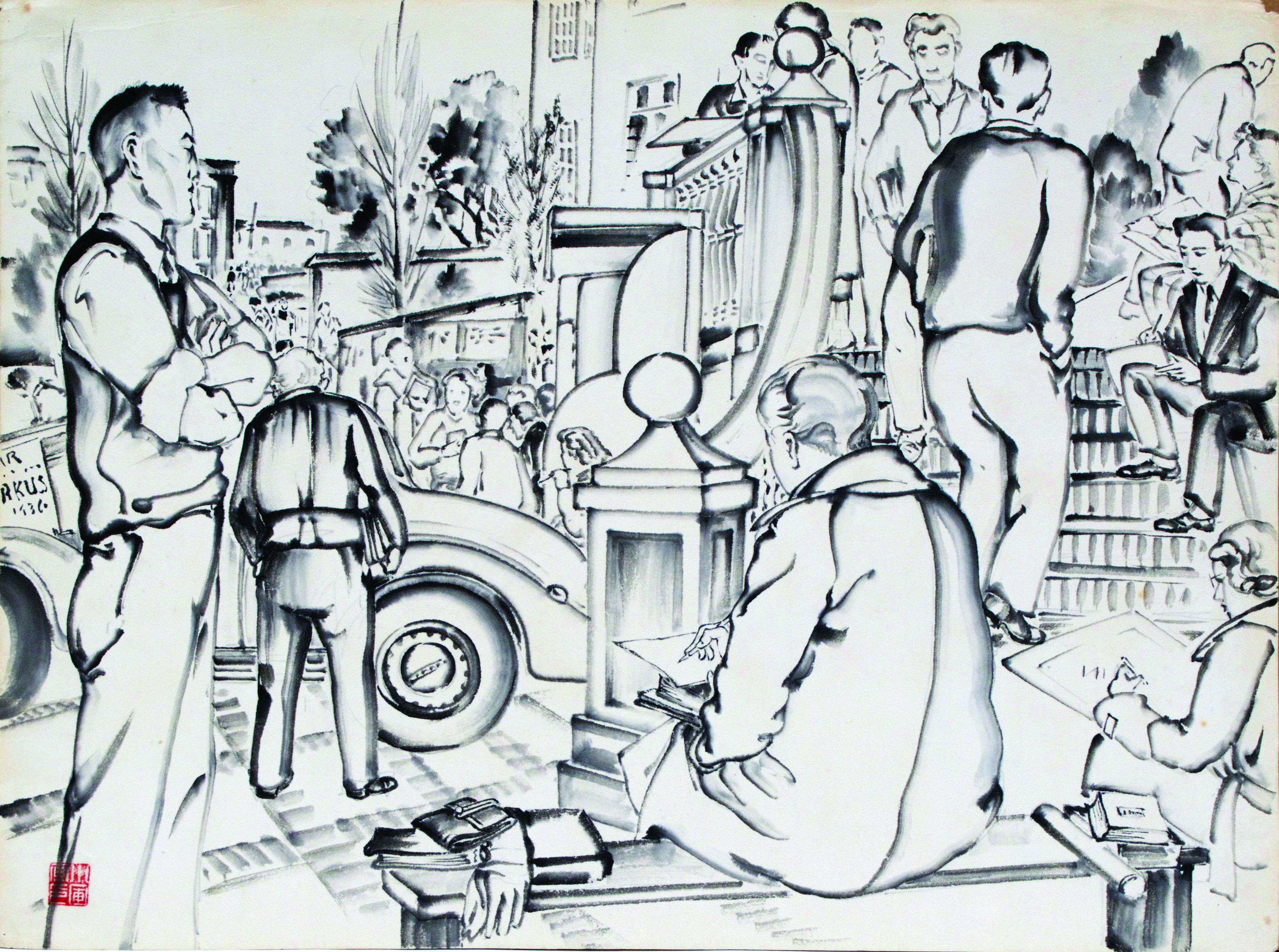 In addition to the artist’s iconic internment imagery, the exhibition also highlights his deft and playful watercolors and sumi-e ink paintings of animals, plants, and landscapes, as well as his colorful studies of ikebana. The variety of works featured in this retrospective demonstrate the artist’s unadulterated joy and dedication to painting. “With a prodigious and expansive oeuvre, Obata’s seemingly effortless mastery of, and productive engagement with, diverse techniques, styles, and traditions defy the seemingly incompatible categorizations of what we have come to define as ‘American/European’ and ‘Japanese/Asian’ art,” says Wang. “Obata’s faith in the power of art, his devotion to preserving the myriad grandeur of what he called ‘Great Nature,’ and his compelling personal story as an immigrant and an American all make Obata and his art as relevant to our contemporary moment as ever.”

Chiura Obata: An American Modern is organized by the Art, Design & Architecture Museum at the University of California, Santa Barbara, with generous support provided by the Terra Foundation for American Art.