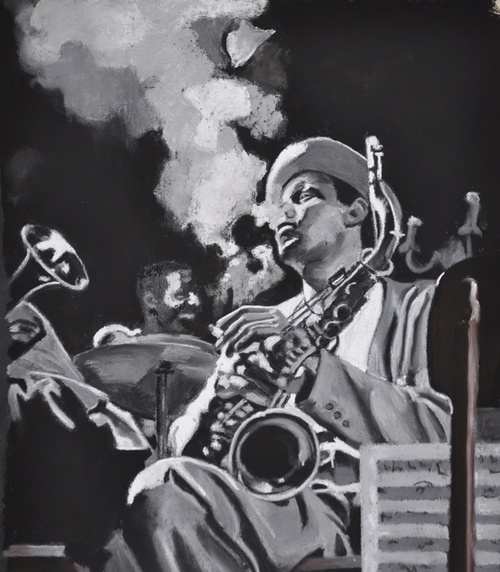 
This year's Crocker Holiday Artisan Market (CHAM) has been cancelled due to Covid-19. In recognition of the unique, financial constraints members of the creative community are facing, we're highlighting five artists we think best represent the show. You can see the entire artist directory by clicking here. This year, 100-percent of the proceeds will go to the artists. Be sure to read last year's roundup as well! Like what we're doing? Consider shopping the Museum Store or giving the gift of membership this holiday season.

Chatting with Rufus Chalmers is like talking to a jazz demigod. The man is jazz personified — there's no other way to describe him. Even his cadence is spontaneous and rhythmic, which each anecdote or riff suggesting a life layered with experiences and life profoundly lived. “The music man, it just makes my day," he notes at one point.


The first thing Chalmers tells me is that he misses art shows. “I love to interact with people and when I get that ‘wow’ thing about my art — whether it’s genuine or it’s not — my head swell up big as all out.” Born in North Carolina just a few years before the Civil Rights Movement, Chalmers and his family moved to Washington D.C. when he was 11.

Before the move, Chalmers was a straight-A student. Afterward? "I got into all kind of trouble”. Making a whooshing sound he quips, “I got pulled to the left field by the doo-wop singing groups, ya know? By the time I reach 11th grade, I was not interested in school, which was one of the biggest mistakes I ever made.” He interjects my follow-up question on the matter saying, “I gotta lot of stories, but we’re not gonna go there . . . there's a time, where if you had seen me, you woulda crossed the street." 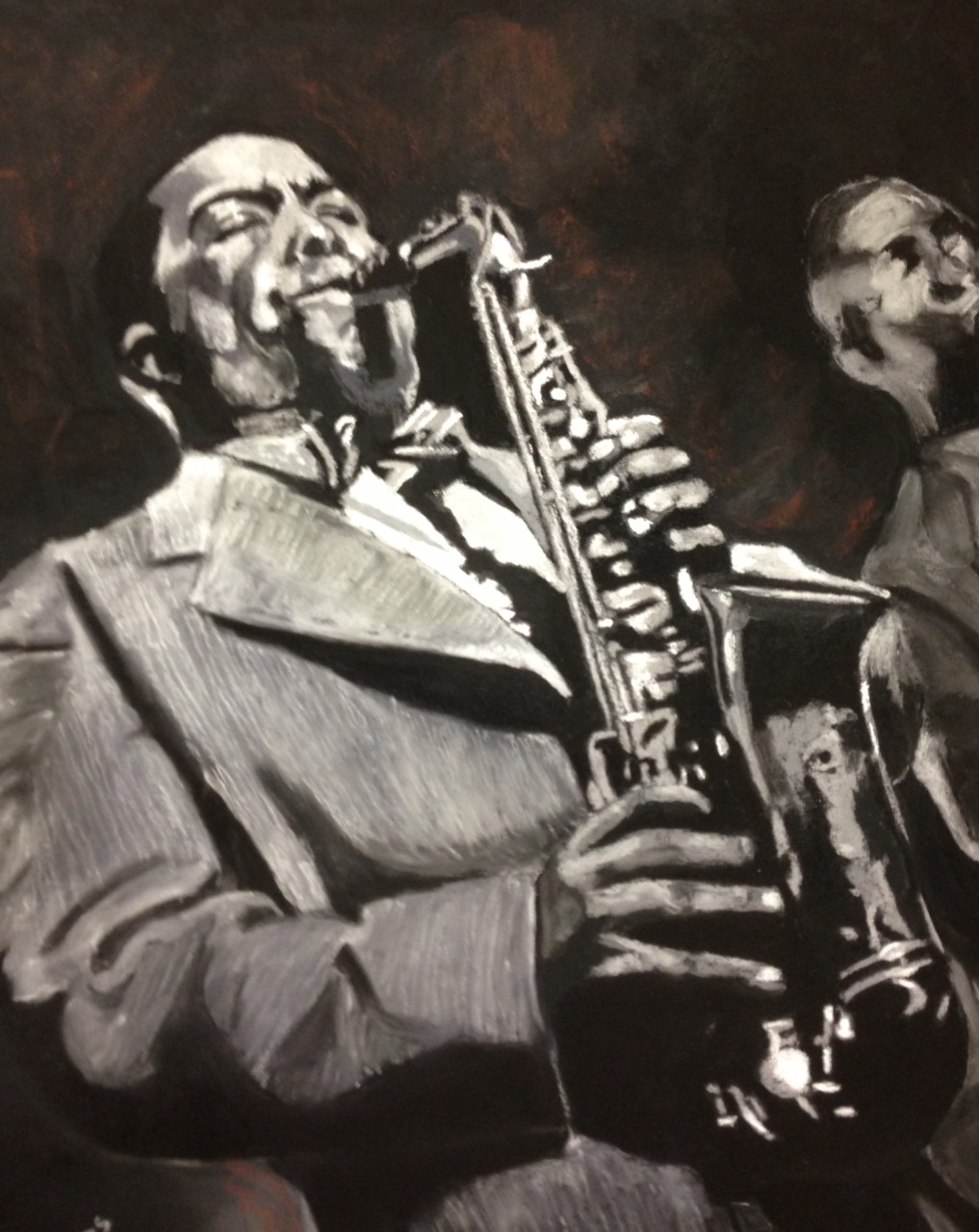 At 17, Chalmers joined the Air Force to “become a man”, which led to a four year stint in London. It was a welcome escape from the increasingly tense situation in the United States. Emmett Till had been murdered only a few years prior and Martin Luther King’s famous “I Have a Dream Speech” was several years away. England wasn’t exactly a shining city on the hill for Black Americans. But it was better. "Nobody said, 'Date my daughter.' But it was okay.”

Chalmers remained in left field for several decades. “Most of my early life, I wasn’t serious about life. Period. When I did get serious, I was 50 years old. I woke up and said, 'Well you better get serious and start life.'”

Chalmers had always been an artist at heart. “I drew a whole lot, man. I’ve been drawing since I was a kid . . . I put it down a lot. There were years in between, but every time I picked up a pencil and paper, it all came back.” However, it wasn't until 2003 — several years after he got "serious" — that he began to practice and sell his art full-time. He was at an outdoor festival in New Orleans with his wife who wanted to buy a painting of a saxophone player. "I said, 'I could do that.' The funny thing, man — I finished the painting and somebody came along and bought the thing. I couldn’t say no. My wife beat me up for it. In fact, she did it two or three times. I’d paint a painting for her and then someone would want to buy it." 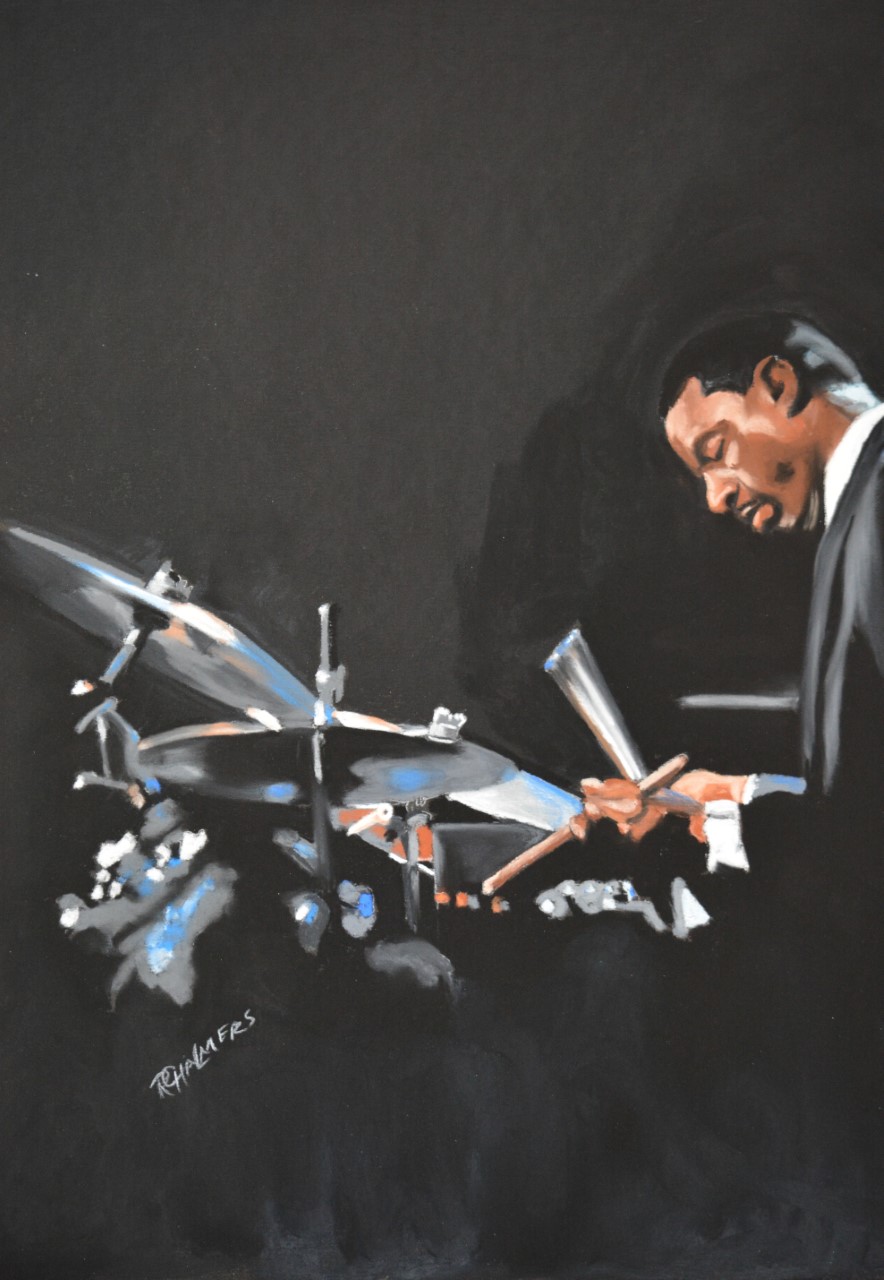 Chalmers's most striking images are his grisaille depictions of jazz artists. It's an unusual decision for most artists, but one that works in his favor: His best paintings make you feel like you're sitting in the front row of jazz performances. It's a feeling he often exploits when selling his art. "It’s a little gimmick: I play my jazz music at my shows and that helps draw the people in."

It's also something that happened by chance. Early on, he couldn't capture light the way he wanted to with colors. “I didn’t know nothing about color. When I took my first painting class, I just couldn’t do nothing with the color.” It wasn't until he saw someone painting a canvas black that he realized he could achieve the same interplay of light with shades of grey. "And that first painting. And I was struck. I was stuck for a long time."

We end our conversation by talking about the state of race relations in America. Chalmers is apolitical or, perhaps more accurately, world-weary. “At my age, man, I just want to have peace of mind and get my art out there." It's a state of mind he pursues with relentless enthusiasm. He even started driving for Uber to cover his travel and admission fees. 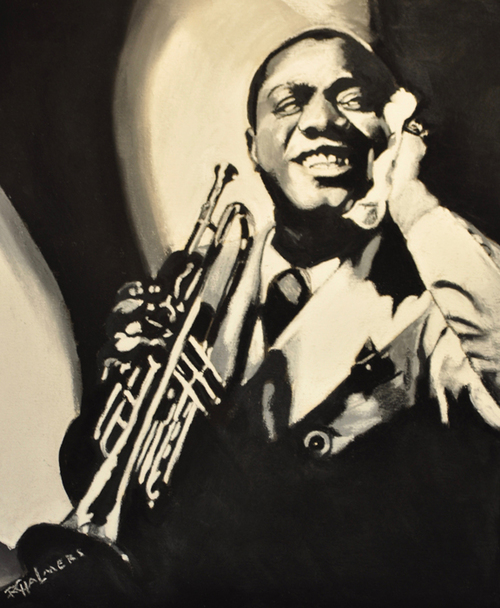 "What role does your art play in a society that's so divided and filled with hate," I ask. He responds with an anecdote similar to ones my own father — another child of the Civil Rights Era — told many times.


“You ever hear the thing about calm the savage beast? I think music does that. Proof: In the late 50s, early 60s, at the height of racism down South, famous Black artists, famous rock-and-roll singers, they couldn’t play with a mixed audience until they said, "No, we’re not going to do it." And all of a sudden, they broke that barrier man, the music itself broke that barrier — white, black — they come together. The police was there with the sticks, but that didn’t stop them either. They used to run a rope down the middle of the auditorium — white on one side and black on the other. And that music couldn’t stop them from tearing that rope down."

Click here to purchase a painting or to request a commission from Rufus Chalmers.

About the author: Brian Hendershot serves as the Crocker's primary support editor, writer, and occasional audiovisual editor. Before joining the Crocker, he was the Head of Communications at the Museum of the Red River in Oklahoma. He also sat on the McCurtain County Historical Board of Directors and the Crocker's MASS Action Committee. He received his MA in Communications at Drury University in Missouri.

​CHAM Highlight: Ling-Yen Jones and the Art of the Box