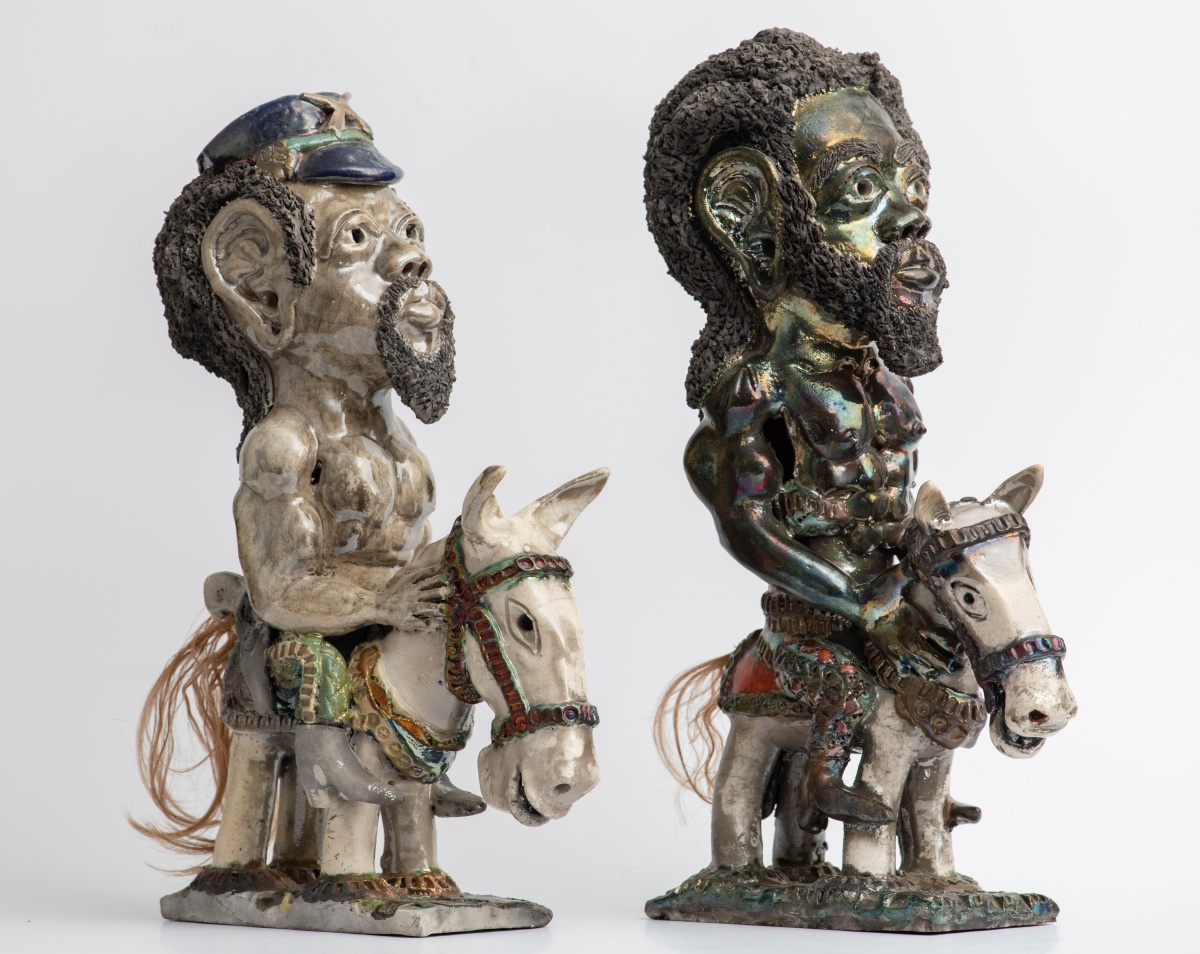 
Born as Mark Teemer in Sacramento in 1946, Akinsanya Kambon is a former Marine, Black Panther, and art professor. Stricken with polio as a child, he turned to drawing for comfort, and ultimately his therapy. He recalls in his adolescence frequent visits to the Crocker Art Museum, which fascinated him and showed him the human potential in creating art. From 1966– 1968, he served a tour of duty in Vietnam with the United States Marine Corps as a combat illustrator and infantryman. Shortly after returning home, he became Lieutenant of Culture for the Sacramento Chapter of the Black Panther Party and created The Black Panther Coloring Book to bring attention to racial inequality and social injustice. Despite being only semi-literate in his youth, Kambon went on to earn his Master of Arts from California State University, Fresno. 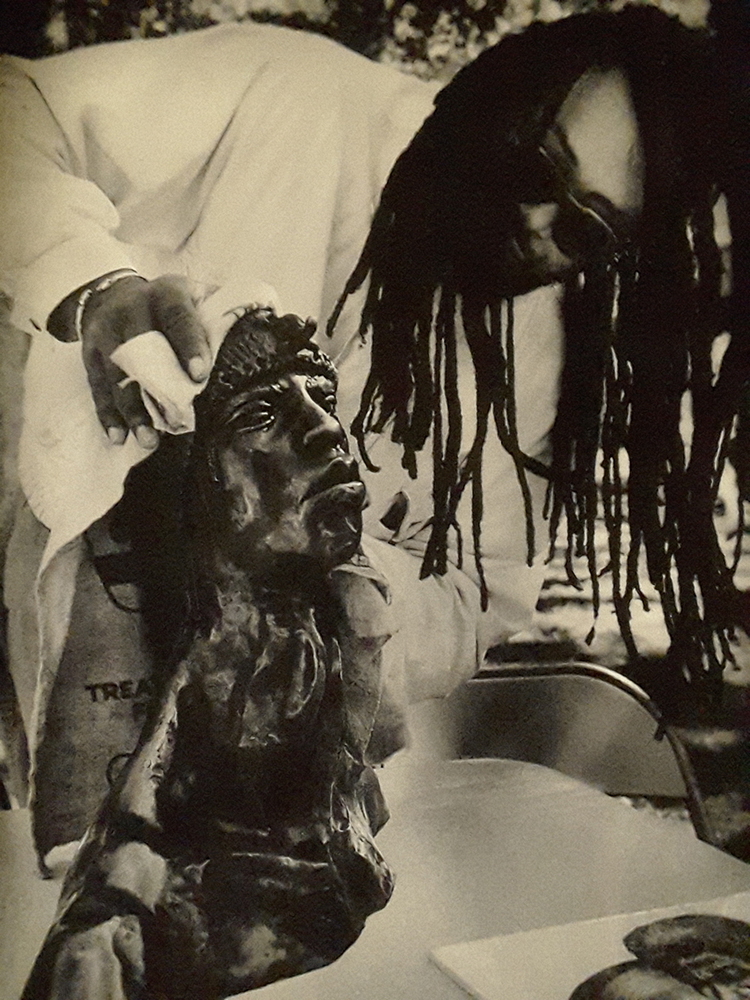 Today, Kambon’s work is as rich and varied as his personal history, expressed through drawings, paintings, bronze sculptures, and ceramics. This exhibition focuses specifically on the artist’s ceramic sculptures, which are fired using the Western-style raku technique — a challenging, dangerous, and unpredictable process that creates prismatic and iridescent glaze finishes. Unlike traditional Japanese raku ware, which is removed from the kiln and cooled, Western-style raku ceramics are heated and placed directly into a sealed container with dry, combustible materials like newspaper, straw, leaves, and sawdust. The materials ignite and form a reduction atmosphere as the oxygen depletes within the container. 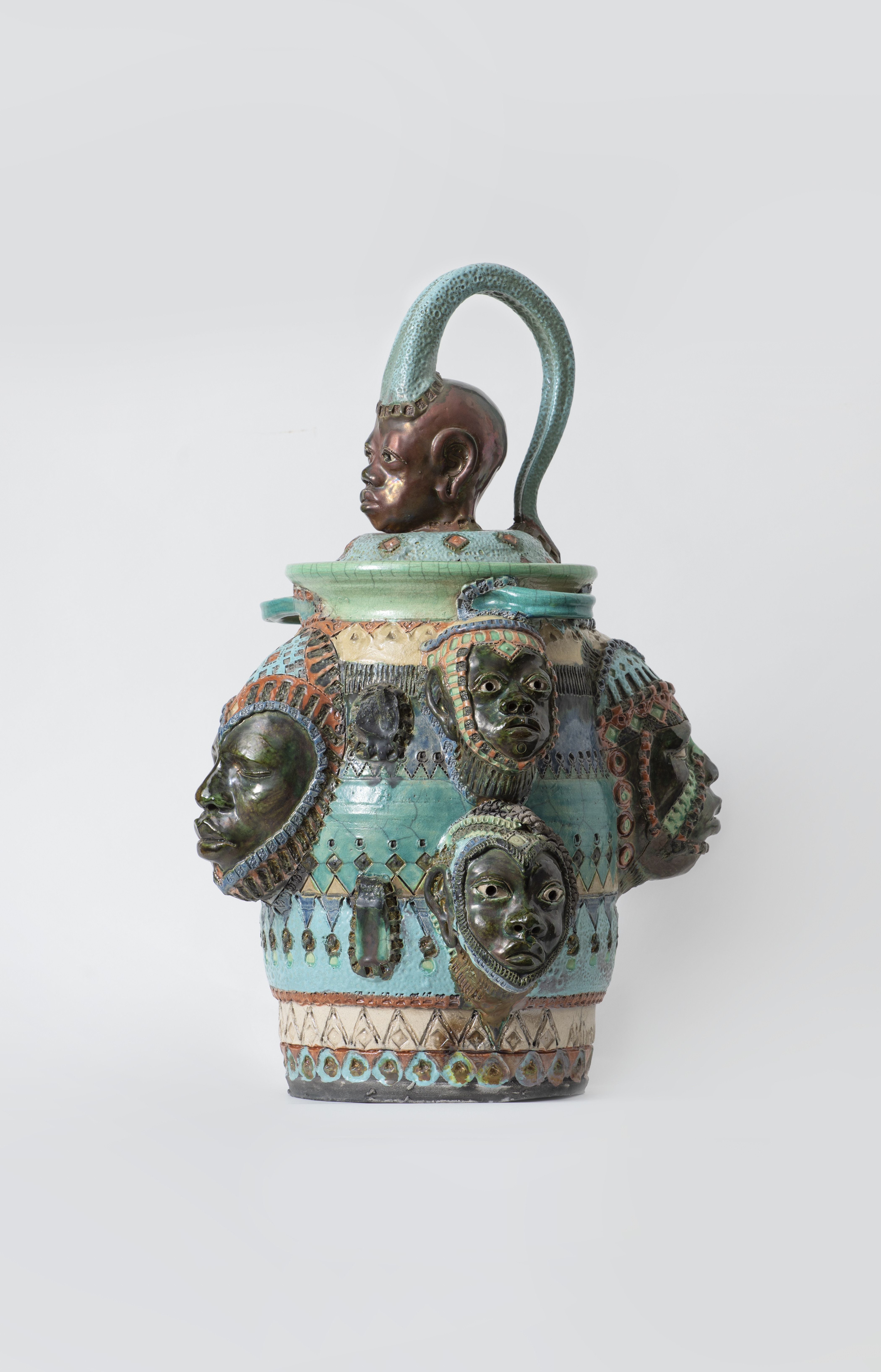 For Kambon, this process infuses each of his works with its “juju” or spiritual vigor. He performs kiln firings in a ceremonial manner, breathing life into figures that sometimes represent African deities and spirits, as well as people from American or religious history. Drawing heavily on narrative tradition and personal experiences, which include extensive travels throughout Africa, his work celebrates perseverance through hardship, cultural pride, and his gift as a storyteller. A particularly emotive example depicts Nehanda Charwe Nyakasikana (ca. 1840–1898), a woman known as the “Grandmother Healer” of the Zezuru Shona people of Zimbabwe. She is portrayed with a tormented expression of grief as she tries to resuscitate the lifeless body of a young child slumped in her arms. A notable military leader in the struggle against colonial forces, Nyakasikana was sentenced to death by hanging — an execution which failed repeatedly until the spiritual pouch she wore was removed. At this final hanging, she declared, “My bones will rise again!”

Other works in the exhibition include equestrian figures that combine American history with African sculptural tradition. There are also lidded vessels like The Greatest Shame, which references the African slave trade and the devastating evils of pursing profit. On the side of this vessel, a man is guided by a turtle, an animal symbolizing wisdom. “We must follow the lead of the wisest among us or we will be guided down the wrong path,” explains the artist. 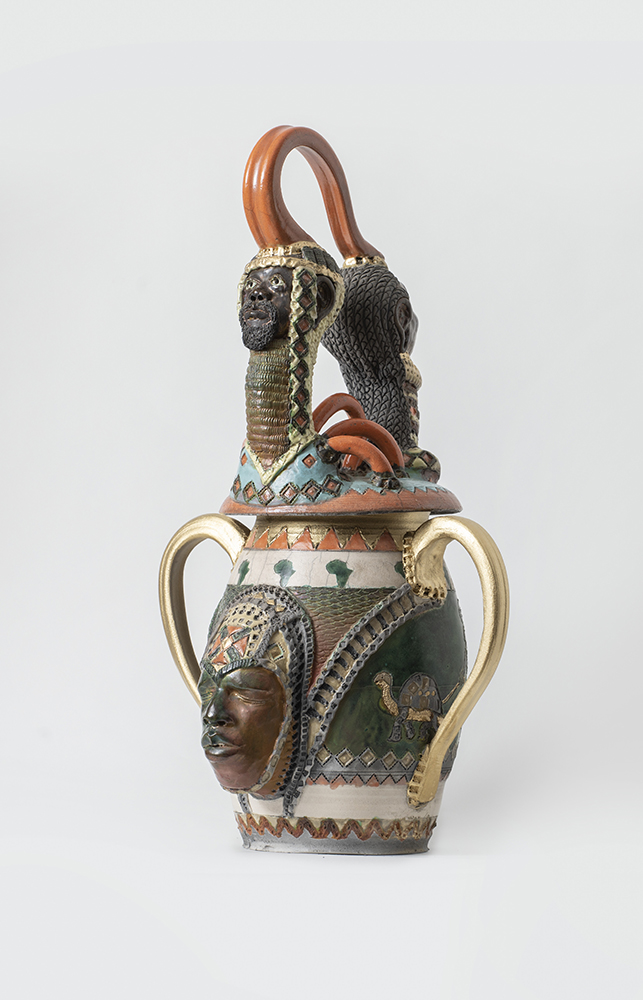 Kambon has long been an advocate for art and education. He worked as a professor at the California State University, Long Beach, for 26 years. In 1993, he was a recipient of the Community Fellowship Award from the California Wellness Foundation, which supported his efforts in community leadership and violence prevention. The artist and his wife, S. Tama-sha Ross Kambon, co-founded Pan African Art, Inc. in 1995, a nonprofit serving youth that promotes academic achievement, an understanding of history, leadership skills, and self-expression through art. In 2003, they founded The Gallery Kambon and, in 2019, they established the Pan African Art Museum in Long Beach. Kambon divides his time between studios in Long Beach and Sacramento, California, and actively continues his work today.

Assistant Curator Christie Hajela earned her M.A. in History of Art and Architecture at the University of Oregon, Eugene, and her B.A. in Art History and in English at the University of California, Davis. She developed an interest in California art during her previous tenure as a gallerist, focusing on West Coast Abstract Expressionism and Bay Area Figurative artists. At the Crocker Art Museum, her current focus is contemporary art. Recent exhibitions include: Cool Clay: Recent Acquisitions of Contemporary Ceramics (2019); Chiura Obata: An American Modern (2019); History, Labor, Life: The Prints of Jacob Lawrence (2019); Hopes Springing High: Gifts of Art by African American Artists (2018); Turn the Page: The First Ten Years of Hi-Fructose (2017); and Forbidden Fruit: Chris Antemann at MEISSEN® (2017). Christie authored the exhibition catalogue, Modern Menagerie: Sculpture by Loet Vanderveen (December 9, 2018 – March 31, 2019) and continues to serve as in-house curator for both internal and traveling exhibitions.

A Fresh Installation of African and Oceanic Artwork