n 1772, the French artist Louis-Jean-François Lagrenée created a series of paintings for the palace of M. de Saint-Jullien, a court official and treasurer of the Catholic Church in France. Thanks to the generosity of Alan Templeton, one of the paintings, The Break of Dawn, has now joined the European collection at the Crocker.

Lagrenée’s art combined elements of the florid mid-18th-century Rococo style with the more sober Baroque of 17th-century France. Born in Paris in 1724, he studied under Carle Van Loo at the Académie royale de peinture et de sculpture, winning the Prix de Rome in 1749. This prize permitted three years of study in the Eternal City, during which the recipients honed their techniques by studying ancient sculpture and Renaissance painting. Lagrenée stayed in Rome for more than 10 years. 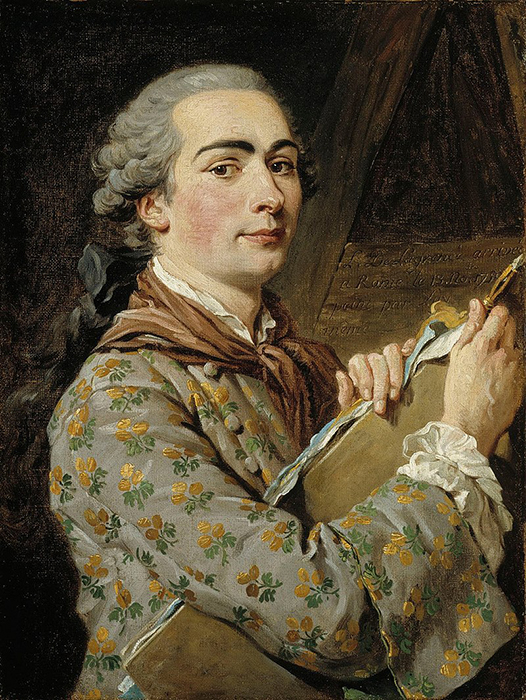 In 1760, he departed for Saint Petersburg in Russia to direct Empress Elizabeth’s Imperial Academy of Arts. Returning to Paris in 1762, he became a professor at the French Royal Academy, enjoying great acclaim from colleagues and collectors. He eventually became director of the Académie de France à Rome, living there from 1781 to 1787. Late in life, he attracted the patronage of Napoleon, who made him honorary director of the Musée Napoleon, now the Louvre, in 1804. Lagrenée died in 1805.

Created in the years before his second departure for Rome, The Break of Dawn is one of four overdoor paintings of the Times of Day commissioned by Saint-Jullien. The artist relies on the text of Homer’s Iliad in his visual choices. He dresses Dawn in saffron-colored robes — used to describe the yellow glow of dawn in the poem — and also gives her a basket of roses to carry, as Homer describes her as rosy-fingered (rhododactylos). As a single rose falls from her basket, Dawn reaches toward Night to take the reins of the wild horses who will pull Apollo’s chariot, the sun. With red eyes and flaring nostrils they prepare to race across the sky. Behind the other figures are two Hours, one of whom holds a full hourglass to mark the beginning of day. Lagrenée’s cluster of somber colors at right gives way to the brighter figure of Dawn at left, whose blue cloak provides visual contrast to her yellow robes.

Lagrenée’s style in this work differs markedly from that of his fellow painter François Boucher, whose style dominated previous decades partly because of his powerful patron, the King’s mistress Mme de Pompadour. Though he had spent time in Rome, Boucher was more interested in the work of flamboyant artists such as Antoine Watteau and Peter Paul Rubens than the so Lagrenée, who was well versed in ancient art, as well as the works of Simon Vouet and other French Classicists of the 17th century, which tempered Boucher’s dynamism with the restraint of his predecessors. Lagrenée’s new, measured style had great appeal to the French court and brought him commissions from the King and aristocracy. Such was his popularity that M. de Saint-Jullien paid the handsome sum of 1000 livres tournois for each of the four paintings he commissioned.

Lagrenée’s cycle of paintings for Saint-Jullien survives in its entirety. Midday, or Apollo Scattering the Winds and Storms, and Sunset, or Apollo in the Arms of Thetis, both belong to the Allen Memorial Art Museum in Oberlin, Ohio. Night, or Happy Lovers Covered by Night’s Veil, remains in private hands.

As the treasurer of the Church in France, Saint-Jullien would have been one of the major figures at the royal court. In addition to his apartments at Versailles, his Paris hôtel particulier would have been a gathering place for his fellow courtiers and a venue for conspicuous display of wealth and taste. His commission to Lagrenée was only one element of a decorative complex that combined fine woodwork with mythological paintings and elegant furniture. Given their scale, and that the allegorical cycle of overdoors represents the times of day, it is tempting to imagine their intended destination as an intimate room for entertaining morning or afternoon guests, rather than a reception hall or ballroom. At the Crocker, The Break of Dawn is hung high on the wall so that visitors may experience the overdoor painting as it was intended.