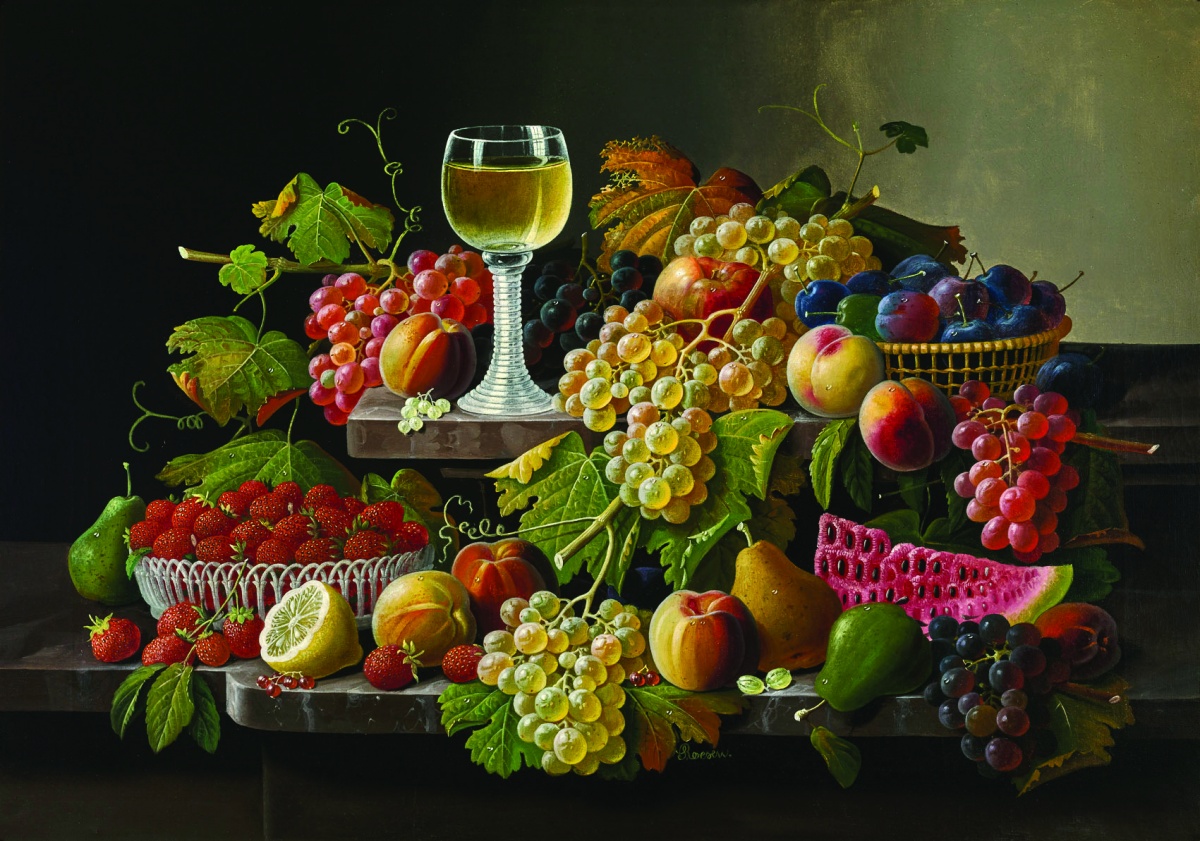 Southern California collectors Judith and Steaven Jones began to acquire 19th-century American paintings in the late 1970s. This collection has grown to include 28 works that the Joneses will ultimately gift to the Crocker Art Museum in Sacramento. Many are by Hudson River School painters, who focused on the landscape and pursued a highly polished, detailed technique. The collection also includes meticulously rendered still-life paintings, as well as charming scenes of daily life. Collectively, these paintings communicate a spirit of American optimism, of transcendental wonderment in nature, of national abundance, and of nostalgia for ways of life that, even as the scenes were being painted, seemed already to be passing.

The first half of the 19th century was a remarkably optimistic period in America’s art history. It was an era when many began to feel that the country was now ready — and could afford — to create its own distinctive forms of literature and art. In 1836, painter Thomas Cole wrote with passion about the American landscape’s importance and power:

“It is a subject that to every American ought to be of surpassing interest; for, whether he beholds the Hudson mingling waters with the Atlantic — explores the central wilds of this vast continent, or stands on the margin of the distant Oregon, he is still in the midst of American scenery — it is his own land; its beauty, its magnificence, its sublimity — all are his.”(1)

A year later, writer Ralph Waldo Emerson echoed this idea: “Our day of dependence, our long apprenticeship to the learning of other lands, draws to a close.”(2) Artists and writers would continue to promote homegrown subject matter for many years thereafter. In 1855, Asher B. Durand sought to convince his fellow artists of the importance of depicting native places and scenes: “Go not abroad then in search of material for the exercise of your pencil, while the virgin charms of our native land have claims on your deepest affections. Many are the flowers in our untrodden wilds that have blushed too long unseen.”(3) 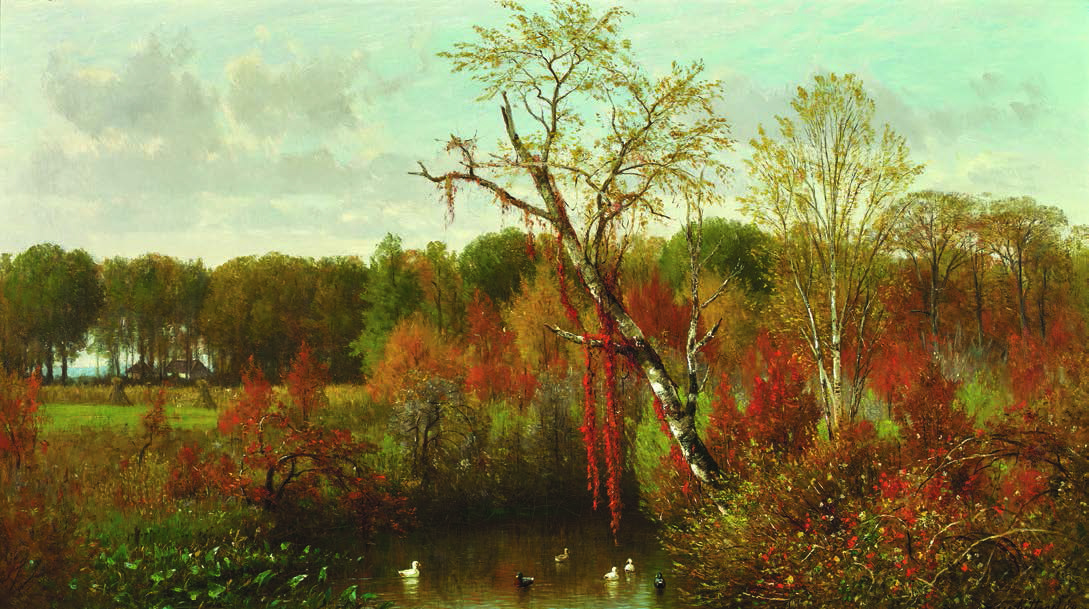 Within this period of exceptional nationalism, American artists began to pursue still-life, landscape, and genre painting as well as sculpture, accommodating a new group of patrons desirous for art besides portraiture. Prior to this time, art for its own sake had been viewed as a luxury, even a vice, as citizens prided themselves on being virtuous and restrained. Patrons for types of art other than portraits were few, a constraint that American visual artists of the period keenly felt. But within the period of economic prosperity following the War of 1812 and then the implementation of a governmental “American System” that bolstered the economy and created new wealth, this began to change. And yet, with seeming incongruity, Americans remained profoundly concerned with their morality and spiritual well-being. Art, therefore, was expected to serve the public good by invoking intellectual or religious associations. In the realm of landscape painting, artists sought such associations, aiming both to be true to nature and to simultaneously communicate by what they included or left out. Cole set the tone with his depictions of the American wilderness, which celebrated nature with topographical accuracy but at the same time moralized, induced piety, and even appealed to viewers’ sense of nationalism. He believed that the landscape could be a “source of delight and improvement,” and he argued that art "should be pure and lofty . . . an impressive lesson be taught, an important scene illustrated — a moral, religious or poetic effect be produced on the mind.”(4) 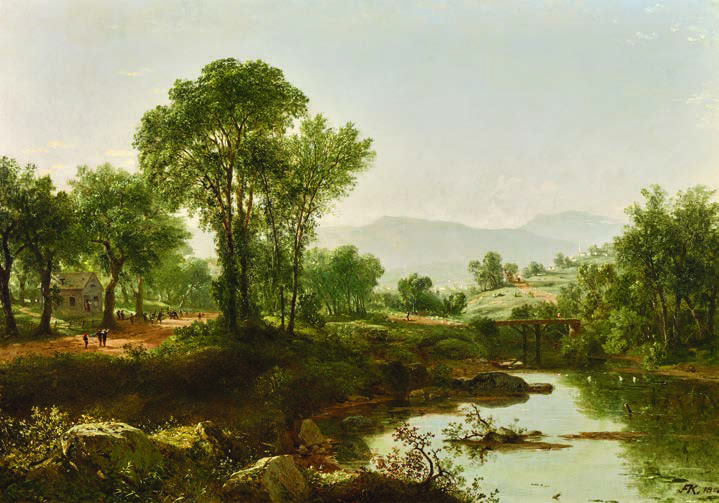 Today, Cole is considered the “father” of the Hudson River School, a group of landscape painters centered around New York City known for depictions of the Hudson River Valley and surrounding region, as well as locales much farther afield. The Jones Collection includes key artists associated with the Hudson River School’s first generation such as Asher B. Durand and Thomas Doughty, as well as second generation artists Albert Bierstadt, Alfred Thompson Bricher, Jasper Cropsey, Sanford Robinson Gifford, William Hart, John Frederick Kensett, William Trost Richards, and Worthington Whittredge. United in their focus on landscape and in their concerns with light and atmosphere, these artists rendered scenes ranging from romantic to realist, intimate to expansive, and stormy to eternally calm. Such variations were recognized at the time, as in The Knickerbocker’s 1833 description of Cole’s favored subjects as being “the wild magnificence of mountain scenery” and of Thomas Doughty’s as “all that is quiet and lovely, romantic and beautiful.”(5) Doughty’s quietly pastoral Adirondack Mountain Scene fits this description admirably.

Following Cole’s death in 1848, Durand assumed the mantle of the country’s leading landscapist. Like other Hudson River School artists, he held transcendental beliefs that equated nature with the Divine. Not only did nature declare God’s glory— his immanence pervading every rock, flower, and tree — it offered the devout a means to connect to him. For Durand, artists’ reverent and faithful attention to nature had the power to awaken profound, elevated emotions, and he wrote of nature’s lessons of “high and holy meaning, only surpassed by the light of Revelation.”(6) 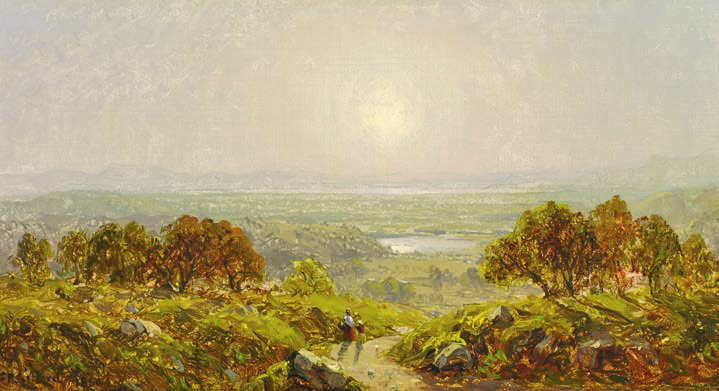 Such transcendental ideals are perhaps most clearly manifest in the work of landscapists today often called Luminists, a term applied by art historians in the mid-twentieth century. Less grandiose, Luminist scenes are typically quieter, horizontally oriented, and give greater focus to bodies of water. They are most noteworthy for their permeating white or golden light, which served as a metaphor for God’s presence. Gifford’s small painting Lake Champlain is Luminist in its evocative, all-pervasive light. The artist became well known for his ability to render atmospheric effects, a skill on full display in the immediacy of this small oil. Hart’s Coast of Maine includes Luminist elements in its sky, but its rocky shore and crashing waves make it more dynamic than most, while cows, boats, and a lighthouse bring elements of domestication to nature’s grandeur. Cropsey’s autumnal landscape Eagle Cliff, New Hampshire features a similarly golden sky, his Edenic locale populated by American Indians. 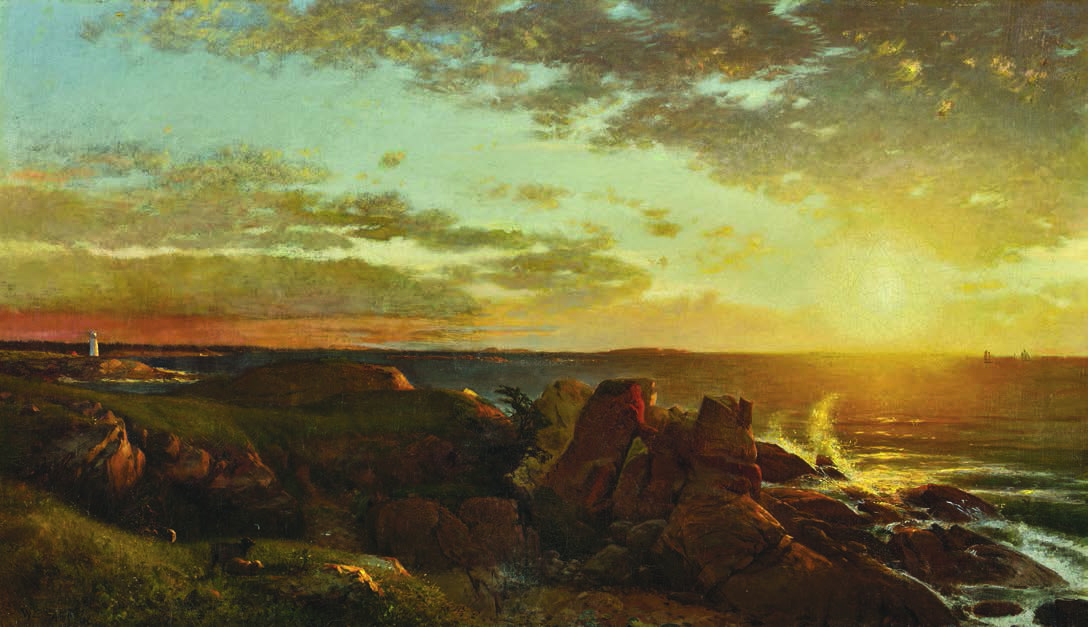 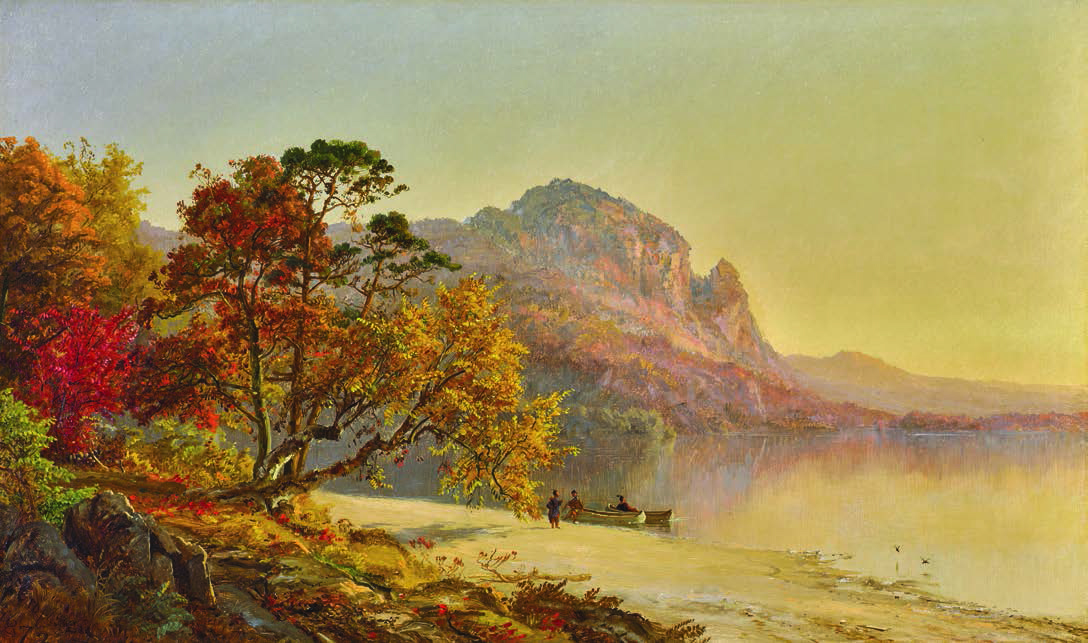 Most landscape painters believed in creating a “composition,” rather than mirroring nature directly, though they were certainly intent on getting the details right. This did not mean that artists found it necessary to depart from the specifics of nature to produce such compositions; they believed that the most beautiful and quintessential parts of nature could be brought together in a way that remained true to the source. Durand, for instance, thought artists must never profane nature’s “sacredness” by willfully departing from its truth.(7)


Yet he also held that once an artist came to know nature’s truths, he or she could be selective about what to present and in what combinations. Two landscapes by Durand in the Jones Collection manifest this approach. Each is pastoral, though they are painted almost 10 years apart, the smaller work in 1857 and the larger in 1866 — shortly before, and just after, the Civil War. Both include a stream flanked by trees and cows, the larger view with foreground flowers, an indication, perhaps, of hope in the wake of the war. The idea of combining nature’s best elements ran contrary to the precepts of English critic John Ruskin. He firmly believed that the artist’s personality and hand should remain invisible. American landscape painters were certainly familiar with Ruskin’s ideas. Richards closely followed Ruskin’s dicta in his earlier work, which was connected both to the Hudson River School and American Pre-Raphaelite painters. His technique, exemplified in his Delaware River Valley, was extraordinarily meticulous, embodying Ruskin’s statement that “if you can paint one leaf, you can paint the world.”(8) 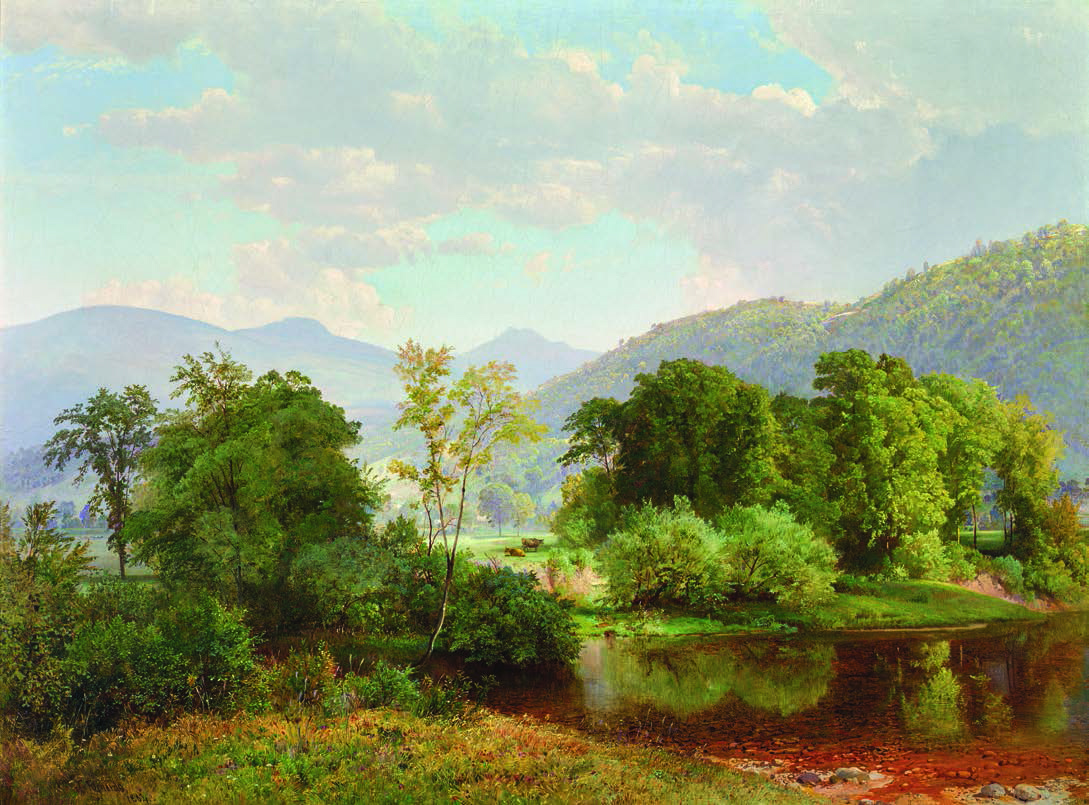 Whittredge’s painting Ducks on a Pond, painted the same year as Richards’s scene, is equally tranquil and nearly as detailed, despite its looser application of pigment overall. Like their landscape-painting colleagues, still-life painters of the era pursued a highly detailed, polished approach that was true to nature, and their paintings also communicated similarly through a careful selection and combination of objects. At mid-century, still-life painters like Severin Roesen demonstrated their faith in America and the potential of its terrain. Roesen’s Still Life with Fruit and Wine bursts with produce — and optimism. This is no memento mori intended to remind viewers of their mortality; it suggests just the opposite. Some of the fruit is even underripe, an indication of youth and an acknowledgment that there is more where this came from.

George Forster’s Still Life with Fruit and Nest is similarly luscious, with grapes, currants, strawberries, plums, and even a bird’s nest filled with eggs, the latter a favorite motif of the American Pre-Raphaelite painters. Born in Bavaria, Forster immigrated to New York in 1865, just as the Civil War ended. His painting, rendered four years later, is less optimistic than Roesen’s and suggests a loss of innocence. One of the plums is split; the board on which the fruit rests contains knotholes; the sky in the background is ominous; and, most obviously, one of the eggs has fallen out of its nest and cracked in two, a conceit easy to read as a metaphor for the divided nation. 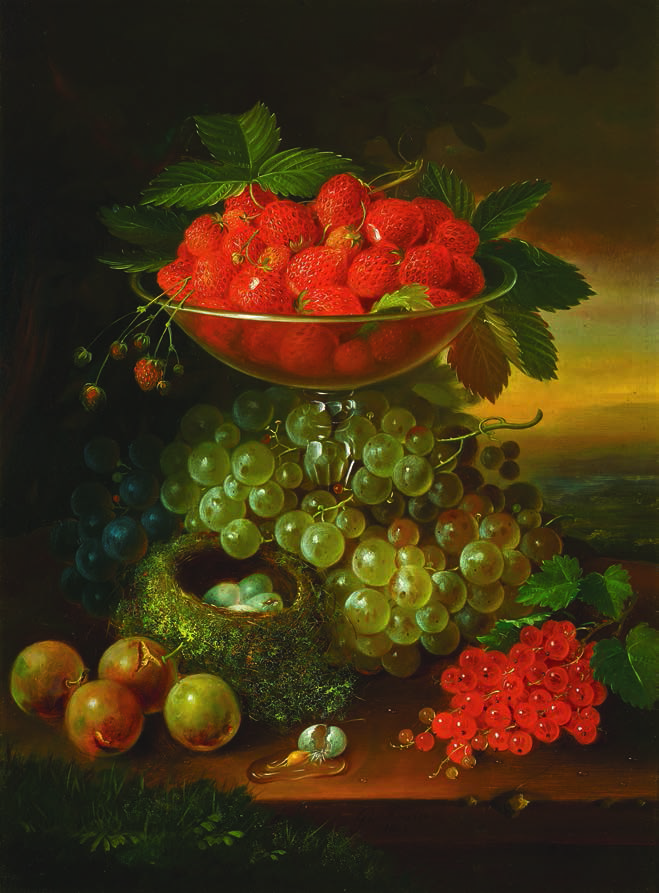 Slightly later in date are still lifes by William Michael Harnett and his Cincinnati-born counterpart Claude Raguet Hirst, the latter having truncated her name from Claudine to create parity with male colleagues. Both artists elevated the already precise approach of their predecessors into a dazzling, trompe-l’oeil technique.

They also changed the focus of their subject matter from objects made by nature to ones manufactured by humans, supplanting God’s handiwork with humanity’s — an indication, perhaps, of the greater industrialization and urbanization of the late nineteenth century. Genre painting, which gained in popularity from the 1830s into the 1840s and 1850s, when many scenes of American daily life were disseminated as engravings by art unions, is also represented in the Jones Collection. These genre paintings might focus on young children as in Thomas Hicks’s Frugal Meal, which features a girl with a dog and a cat, both eager to share her lunch, or they might include a young woman as in Jervis McEntee’s Sitting by the Fire. Her pensive expression and mourning attire suggest she has lost a loved one in the Civil War —probably the soldier in the framed portrait by the fire. Some paintings blur boundaries between landscape and genre painting, such as John Frederick Kensett’s School’s Out, which includes children playing outside a distant one-room schoolhouse, and Enoch Wood Perry, Jr.’s Ice Skating Party, a scene inspired by a popular American pastime as well as seventeenth-century Dutch paintings of this subject. Paintings like these manifest an American “peace, security, and happiness” that Cole called “freedom’s offspring.” He wrote:

“On the margin of that gentle river the village girls may rample . . . and the glad school-boy, with hook and line, pass his bright holiday — those neat dwellings, unpretending to magnificence, are the abodes of plenty, virtue, and refinement. And in looking over the yet uncultivated scene, the mind’s eye may see far into futurity.”(9) 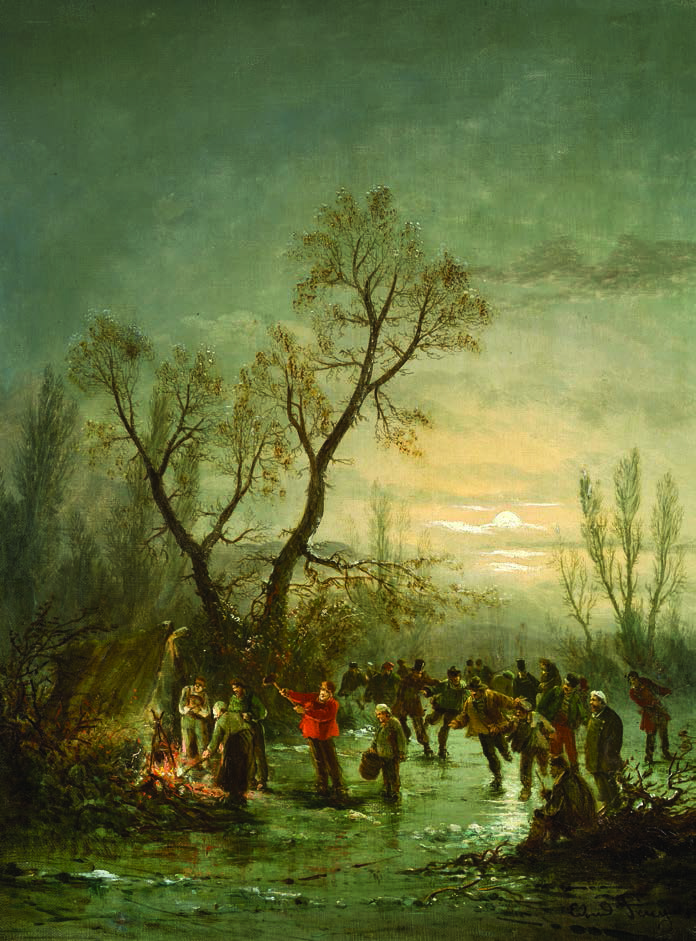 5) The Knickerbocker 2 (July 1833), quoted in John K. Howat, “A Climate for Landscape Painters,” in American Paradise: The World of the Hudson River School, introduction by John K. Howat (New York: The Metropolitan Museum of Art, 1987), 50.