12 More Artists from the Crocker's Collection to Look for at Art Auction 2020! 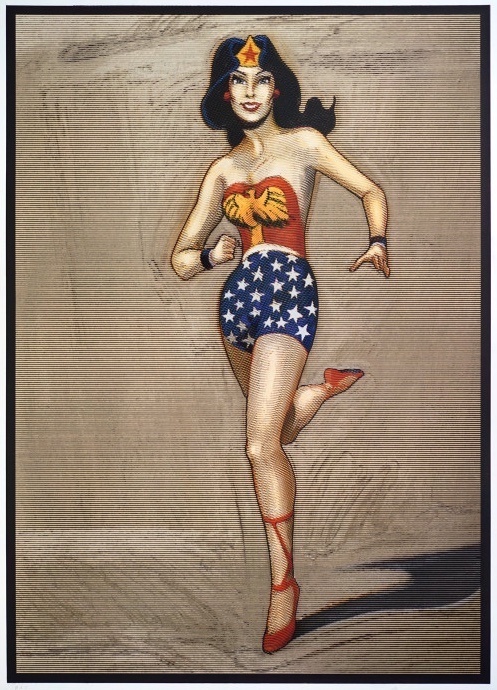 Art Auction Season is here, which means it’s your chance to obtain works from the region’s most distinguished artists. Proceeds from the auctions provide critical funding for the Museum’s exhibitions and education programs. It’s a win for your living room, a win for the Crocker, and a win for our entire community. Typically spirited, in-person affairs, this year’s auctions will be held on Bidsquare, an online bidding platform. To learn how the process works — and to register — click HERE.

We’ve rounded up 12 more works (out of the 200+ available) for this year’s auctions. Each of the artists below are represented in the Crocker’s permanent collection. This year’s auctions are open to everyone, and to see all Art Auction works, you can click HERE for the silent and HERE for the live. To see all Big Names, Small Art works, click HERE. Keep an eye out on social media and our e-news for more highlights. 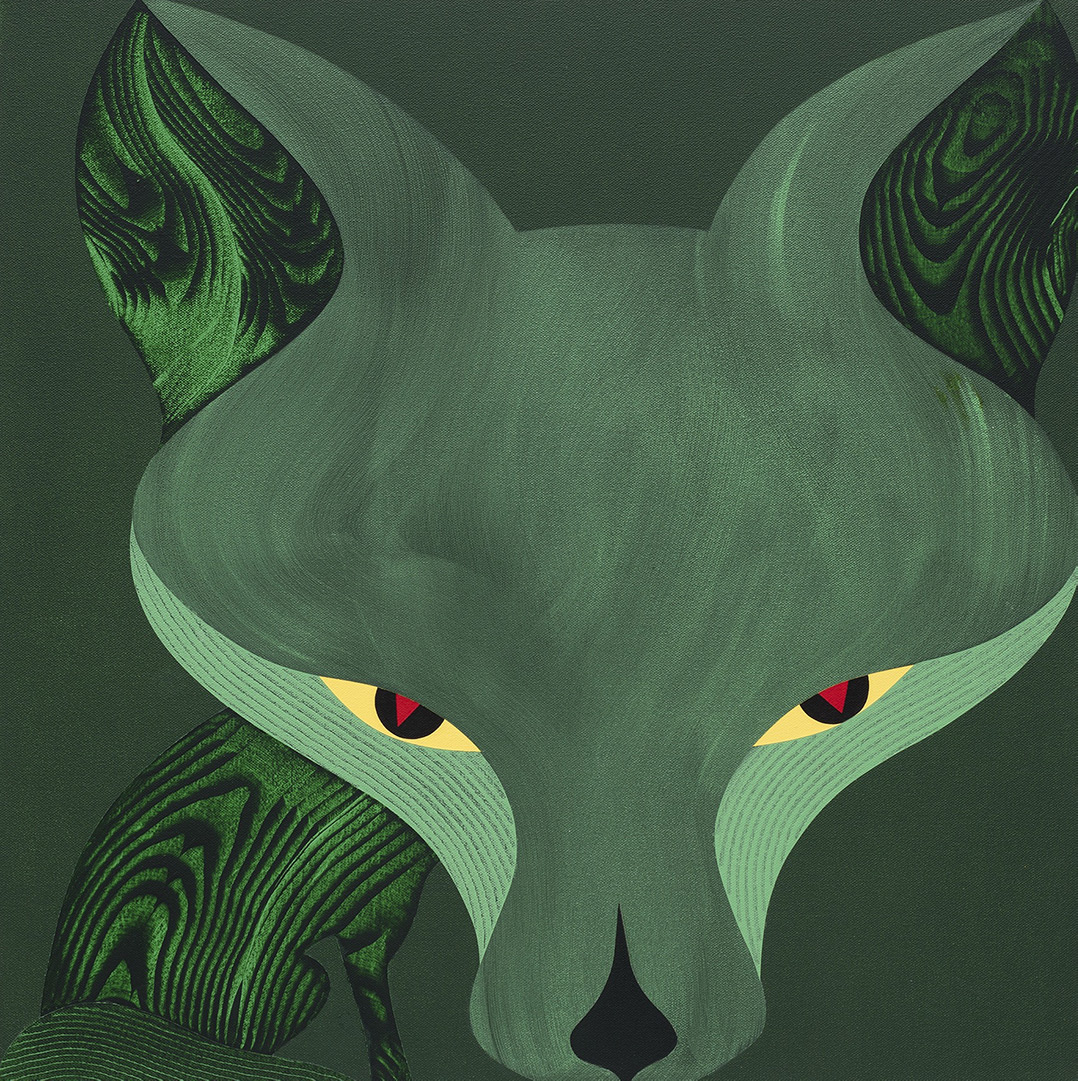 A California-native, Hilary Baker grew up in Los Angeles during its booming, post-war period. Her father was a renowned concert violinist — who was, among other things, responsible for the screeching violins in Psycho. Baker often met musicians and artists like Igor Stravinsky, Jascha Heifetz, and Henry Miller at her family’s dinner table. In many ways, Baker was destined to become an artist.

By her own admission, Baker is now a “serial painter, tackling subjects that obsess [her]” (Voyage LA, 2018) with a tenacious ferocity until she is satiated. David Pagel of the Los Angeles Times describes her process thusly: "Baker mixes yellow and green like no one else, creating a rainbow of shades that seems as tasty as sorbet and as toxic as antifreeze. She makes gray look sexy and beige exciting." 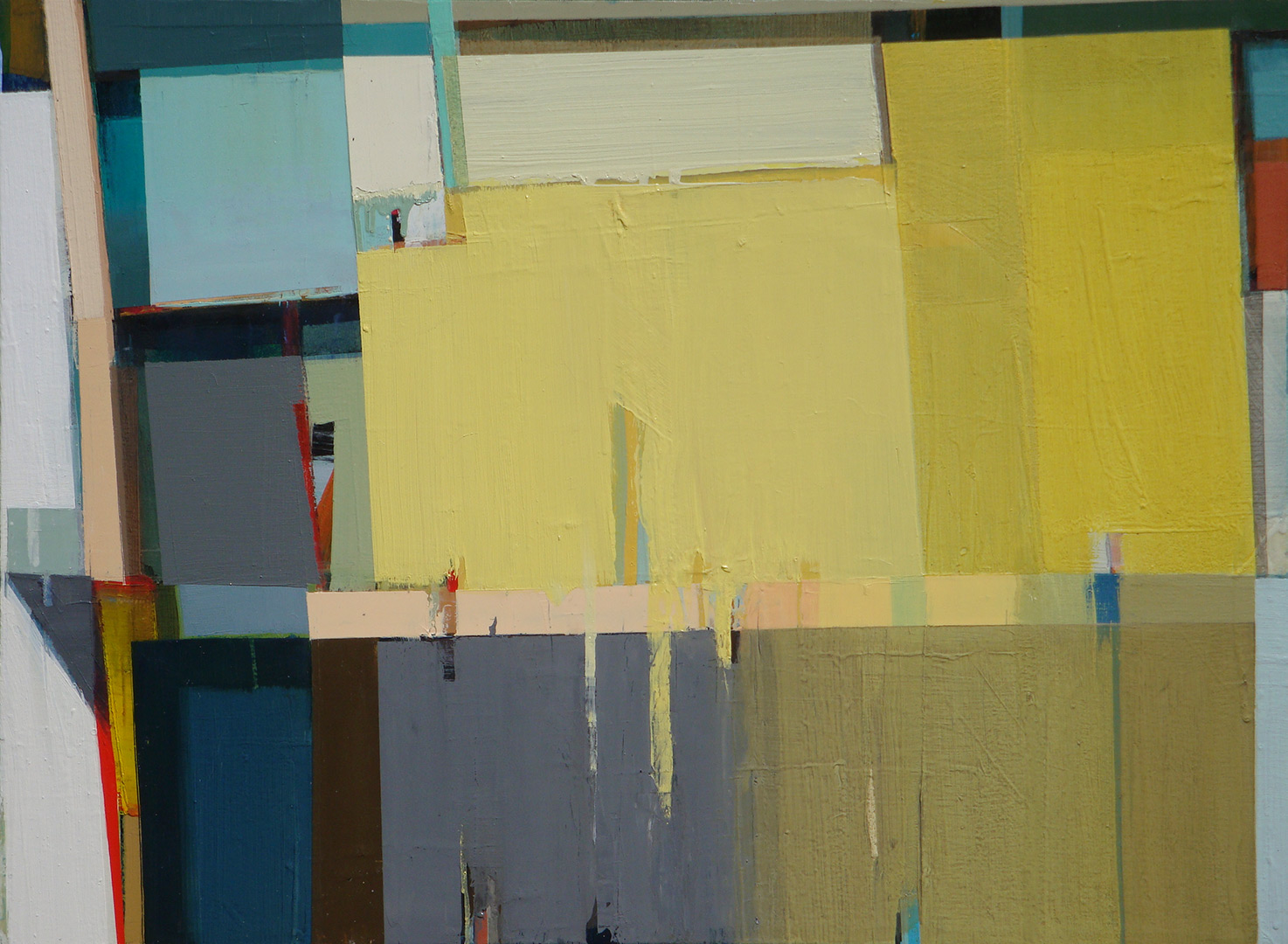 When Suhas Bhujbal moved from a small village in India to the bustling city of Pune — the eighth most populous city on the subcontinent — he felt what many rural immigrants feel: a profound sense of loneliness. So, he took up art because it “helped [him] feel like [he] belonged” (Andrea Schwartz Gallery, 2020). Today, much of Bhujbal’s work radiates a sense of peaceful simplicity. He paints both buildings and people, each one seemingly embodying characteristics of the other.

Suhas Bhujbal is represented by Andrea Schwartz Gallery. He is an MFA-directed study advisor at the Academy of Art University in San Francisco. Bhujbal’s work is included in the permanent collections of the Crocker Art Museum, the Bakersfield Museum of Art, and corporate collections. 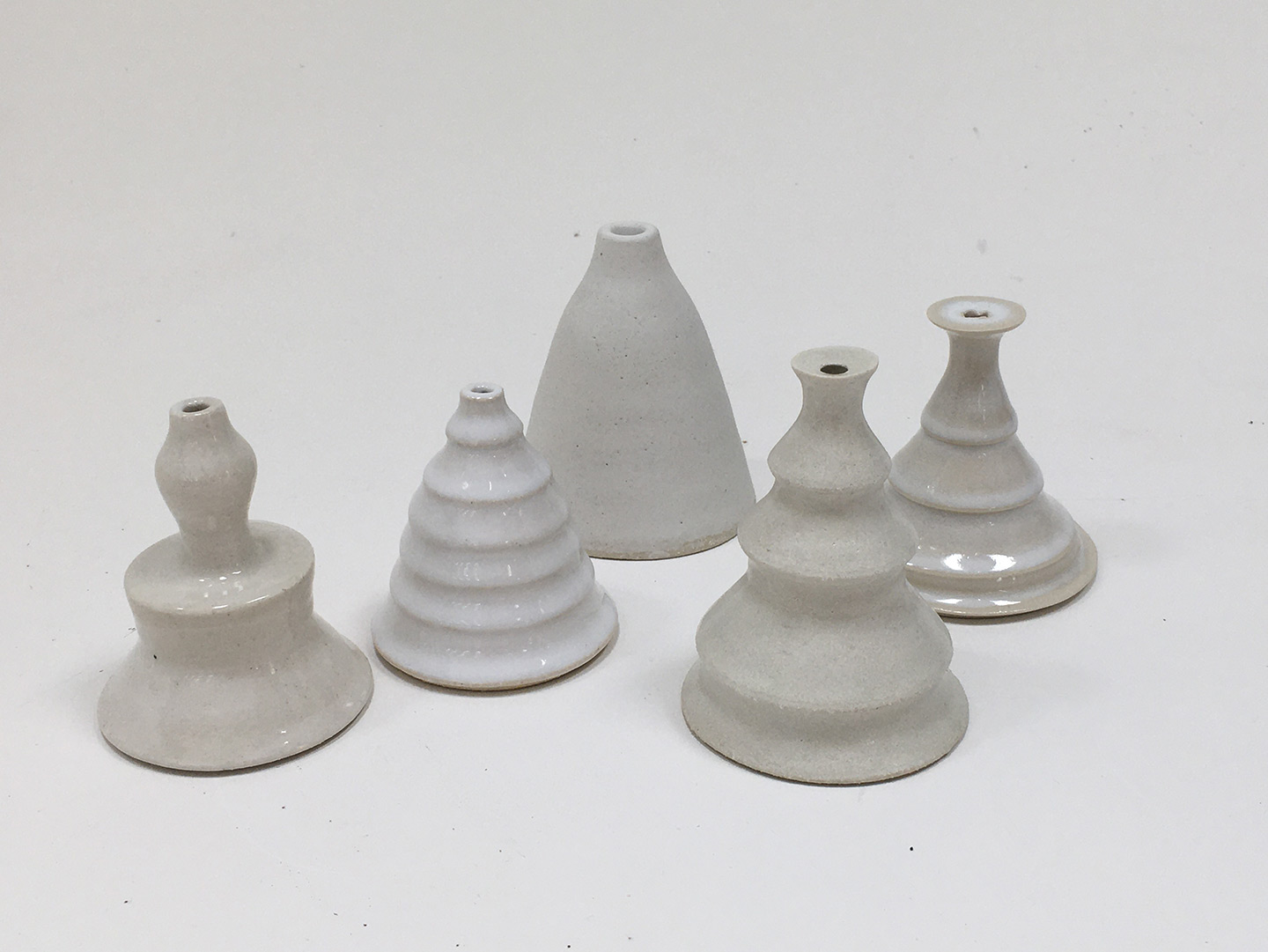 If you don’t recognize Bean Finneran, you’ll certainly recognize some of her larger sculptures. Each brightly colored form is made from hundreds or thousands of distinctive, individual ceramic “curves” that resemble blades of grass. Each sculpture is built curve-by-curve, which means they cannot be moved without taking them apart piece-by-piece. Although White Weed Pots is smaller than Finneran’s more iconic works, they contain the hallmark of her artistic process: a simple, elemental form, repeated multiple times.

Bean Finneran’s work has been exhibited nationally and internationally and is included in the collections of the Crocker Art Museum, the Museum of Decorative Arts in Paris, France; the Achenbach Foundation for Graphic Arts at the Legion of Honor, the San Jose Museum of Art, the Kemper Museum of Contemporary Art, the John Michael Kohler Arts Center, and the Mills College Art Museum. 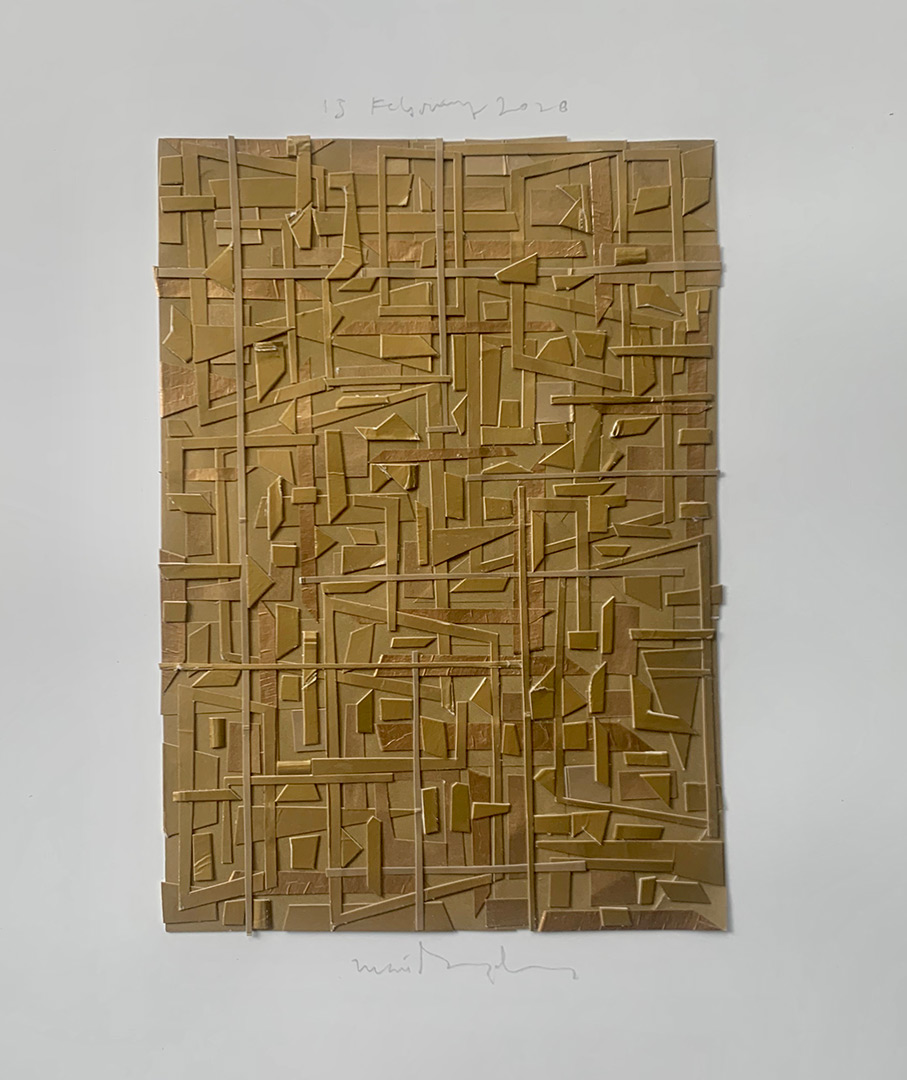 A public defender by day, Matt Gonzalez started experimenting with painting in 2005 so he could be better informed when looking at paintings. Eventually, this academic excursion turned into a second career. Most of his compositions feature a highly layered, rectilinear aesthetic, not unlike the streets of San Francisco. Central to his art are discarded strips of paper, which he finds on his walks. According to the artist, each scrap has its own character, an “ environmental distress is apparent on the surface, which can’t be replicated or faked in the studio” (Juxtapoz, 2018).

Matt Gonzalez is represented by Dolby Chadwick Gallery. His work is included in the permanent collections of the Crocker Art Museum, the San Francisco Museum of Modern Art, and the Achenbach Collection at the Fine Art Museums of San Francisco.

Born in El Paso, Texas, Connie Goldman uses a minimalist vocabulary and a reductive aesthetic to explore concepts like interconnectedness, structure, opposition, and change. Such paintings are not devoid of meaning. Rather, they are designed to “trigger” meaning or, more specifically, an association. She describes her work thusly: “With a slow unfolding the viewer can internalize the dynamics of the work through his/her own emotional or intellectual filters. Thus, while the extreme abstraction leaves my work very open to interpretation, the interpretation can become very intimate” (Making the Art Soon, 2010).

Connie Goldman is a former faculty member of the San Francisco Art Institute, San Francisco State University, and Santa Rosa Junior College. Her work is in the permanent collections of the Crocker Art Museum, the Berkeley Art Museum and Pacific Film Archive, the Laguna Beach Museum of Art, and the El Paso Museum of Art.

Cynthia Innis is represented by Walter Maciel Gallery. Her work is in the collections of the San Jose Museum of Art, the Berkeley Art Museum and Pacific Film Archive, and the U.S. Department of State’s Art in Embassies collection. 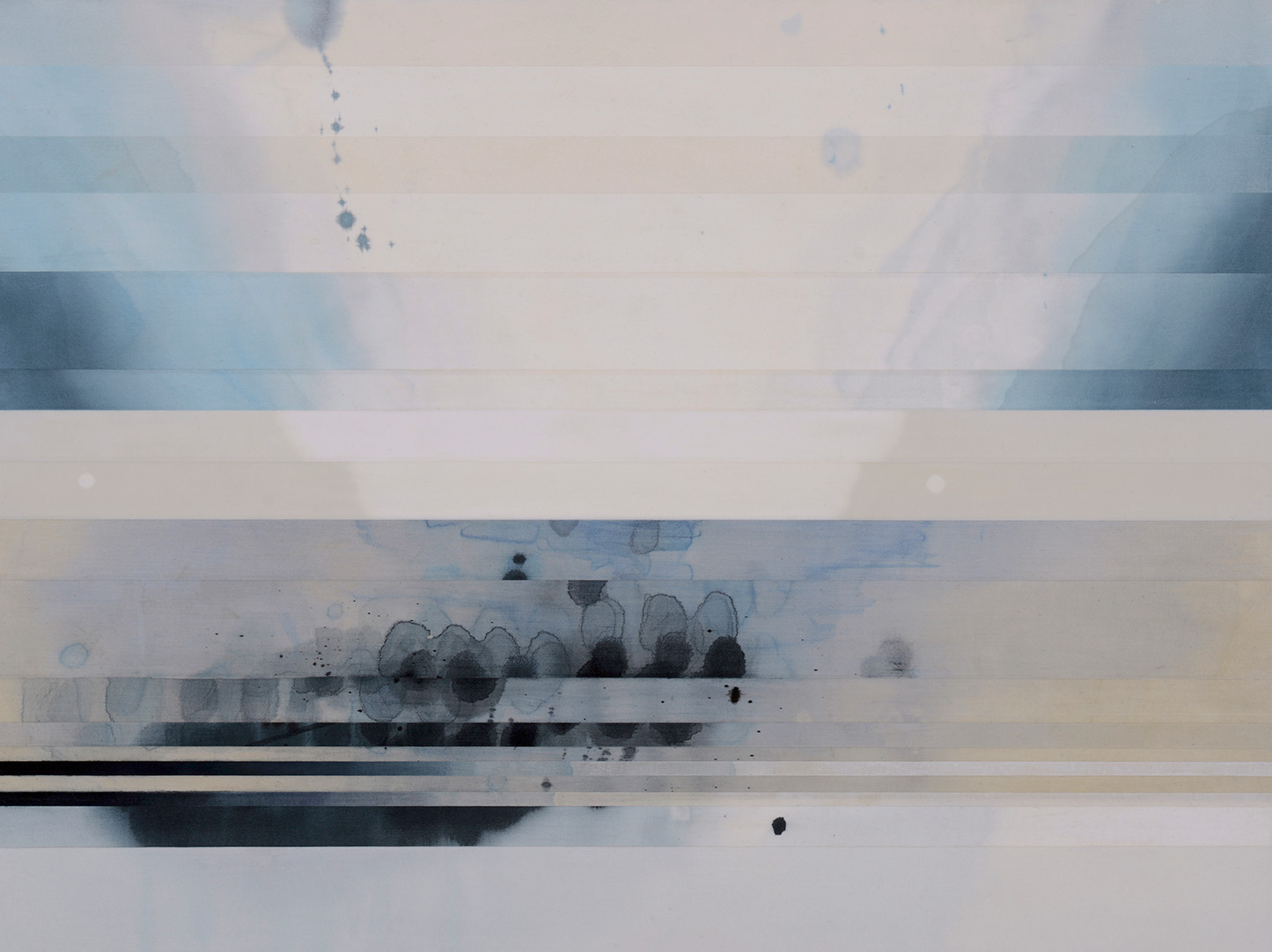 Cynthia Innis’s recent series is part of a continued “fascination with geologically dynamic landscapes.” A California-native, Innis manifests the San Andreas Fault’s ever-shifting movements onto wood panels by composing and manipulating layered strips of fabric stained with ink and acrylic paint, each with varying degrees of saturation. These strips are sometimes sewn to gather to create striated compositions.

She states: “Like tectonic plates pushing past one another, the fabric bands, sewn together or collaged, are offset to create fragmented forms that mimic the kinetic energy of the natural process. The disjunction of forms also allows me to explore multiple perspectives at once, simultaneously capturing what is above and below ground … Evidence of the effects of the San Andreas Fault, running the length of California, are both seen and unseen and are in no way complete” (Cynthia Innis, 2020). 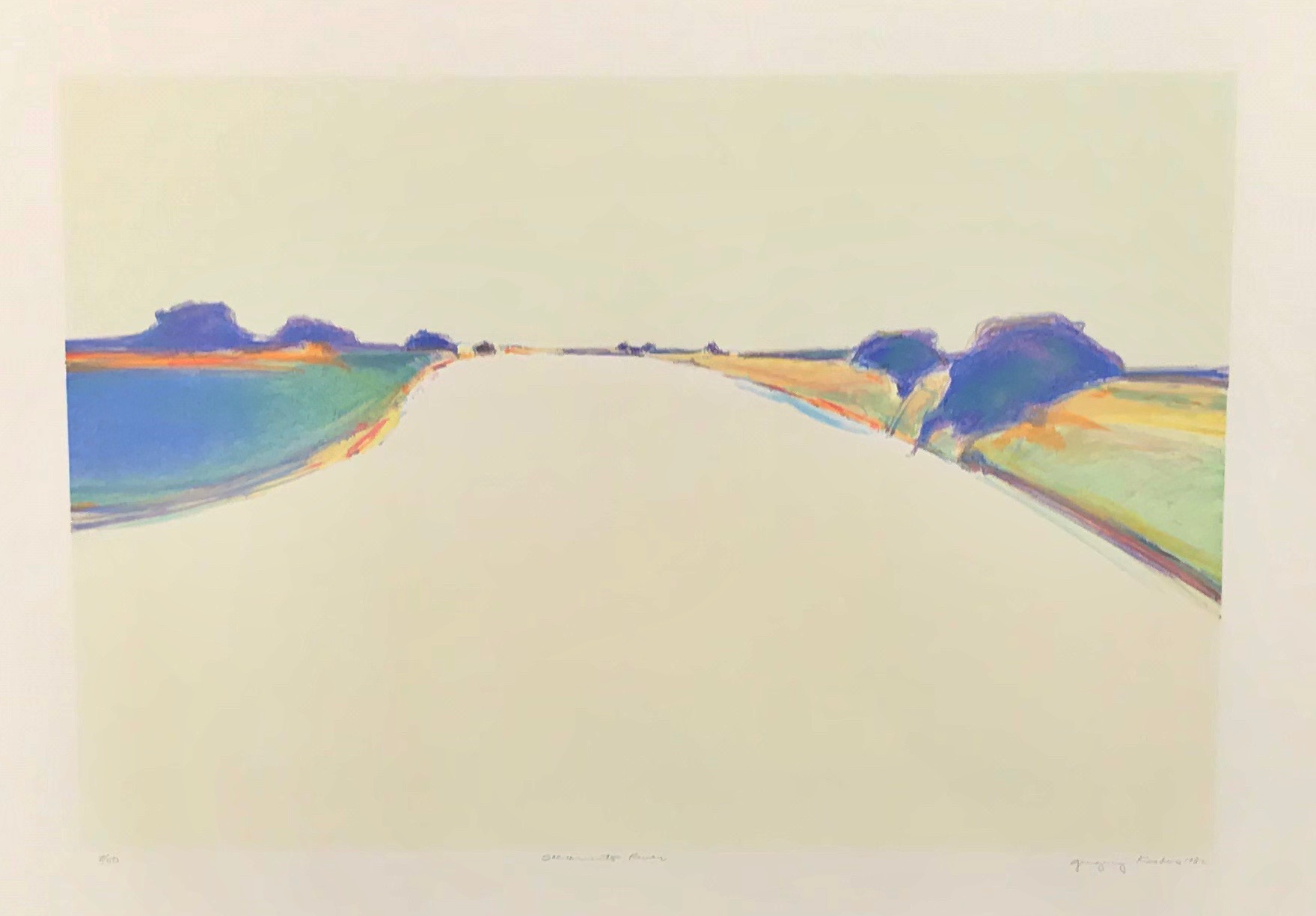 Gregory Kondos is known for the buttery spread of bright, warm color in his thickly painted landscapes. Even the cool tones of blue in a Kondos painting are heated, evoking sun-warmed expanses of summer sky and water. The intensity of color and heat broadly flattens detail and is common in Sacramento, where he has painted and taught for half a century.

Kondos’s use of high-keyed color and broad paint handling shows an affinity to artists like Roland Petersen, Raimonds Staprans, and Wayne Thiebaud, with whom he shares an abiding friendship. Unique to Kondos is his verity to subject and balanced compositions to express not only the tranquility of the scene, but also the pleasure of solitary communion with nature. Kondos has painted Greece, France, and the American Southwest but continues to find his most enduring inspiration in the landscape of California. 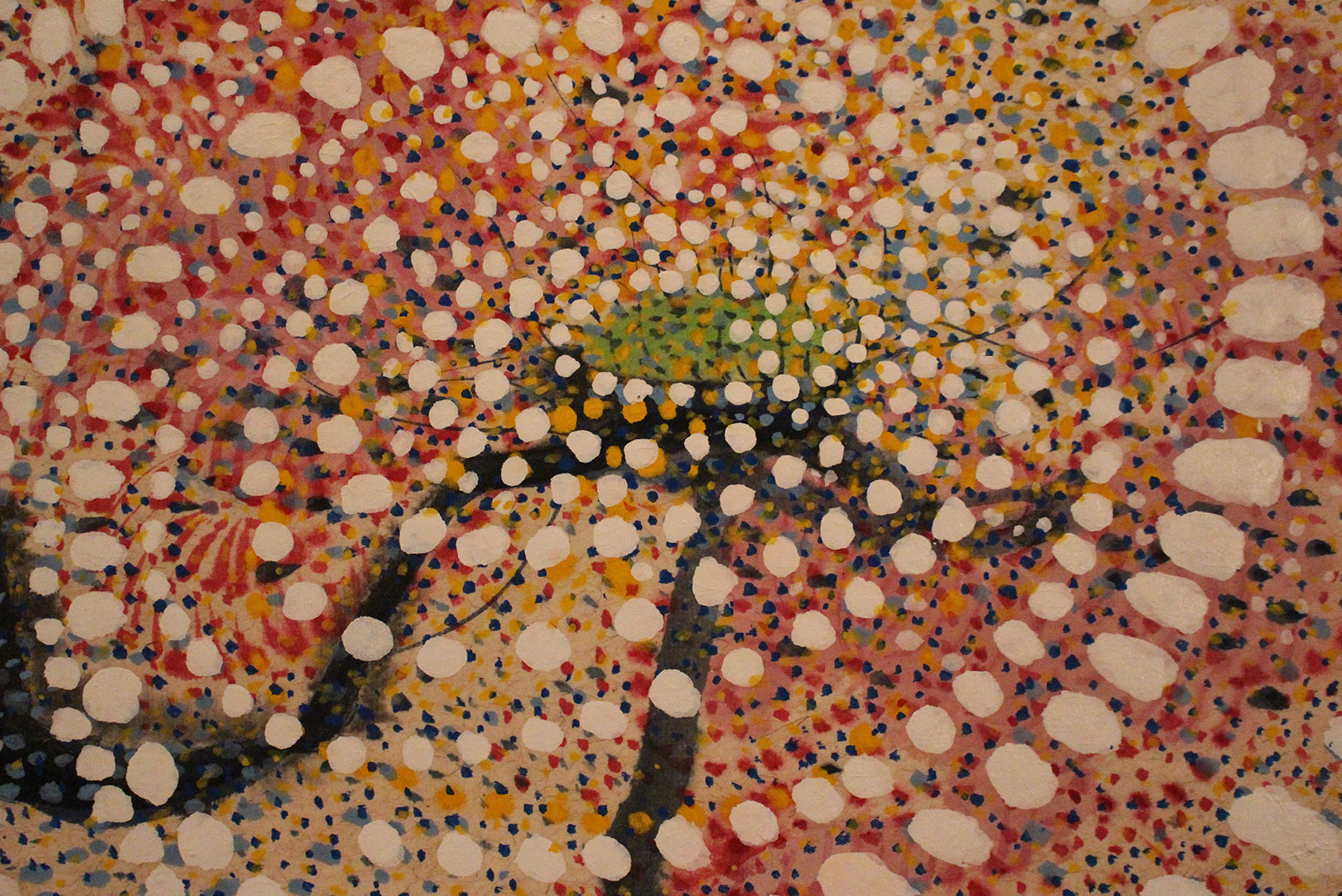 A native of China’s Guangdong Province, Brenda Louie immigrated to the United States in 1972 to pursue advanced education. After receiving her BA in Economics from California State University, Sacramento, she decided to work for the State of California. In 1984, she took a three-year leave of absence to pursue art and, upon finishing her leave, resigned from her post and became a full-time artist.

Louie’s art is based on continuous experimentation and research, as well as her lived experiences in rural China, Hong Kong, and California. Her formative years were spent under the tutelage of her father — a Chinese scholar and calligrapher — and Chinese Painting Lingnan Master Au Ho-Nien, while her time in graduate school was spent with American artists Oliver Jackson and Joan Moment. As a result, much of her art focuses on diasporic narratives, including her own, which resulted from China’s Great Famine.

Brenda Louie holds an M.F.A from Stanford University and is a professor in the art department at California State University, Sacramento. Her work can be found in the permanent collections of the Crocker Art Museum and the ZheJiang Art Museum in Hangzhou, China. 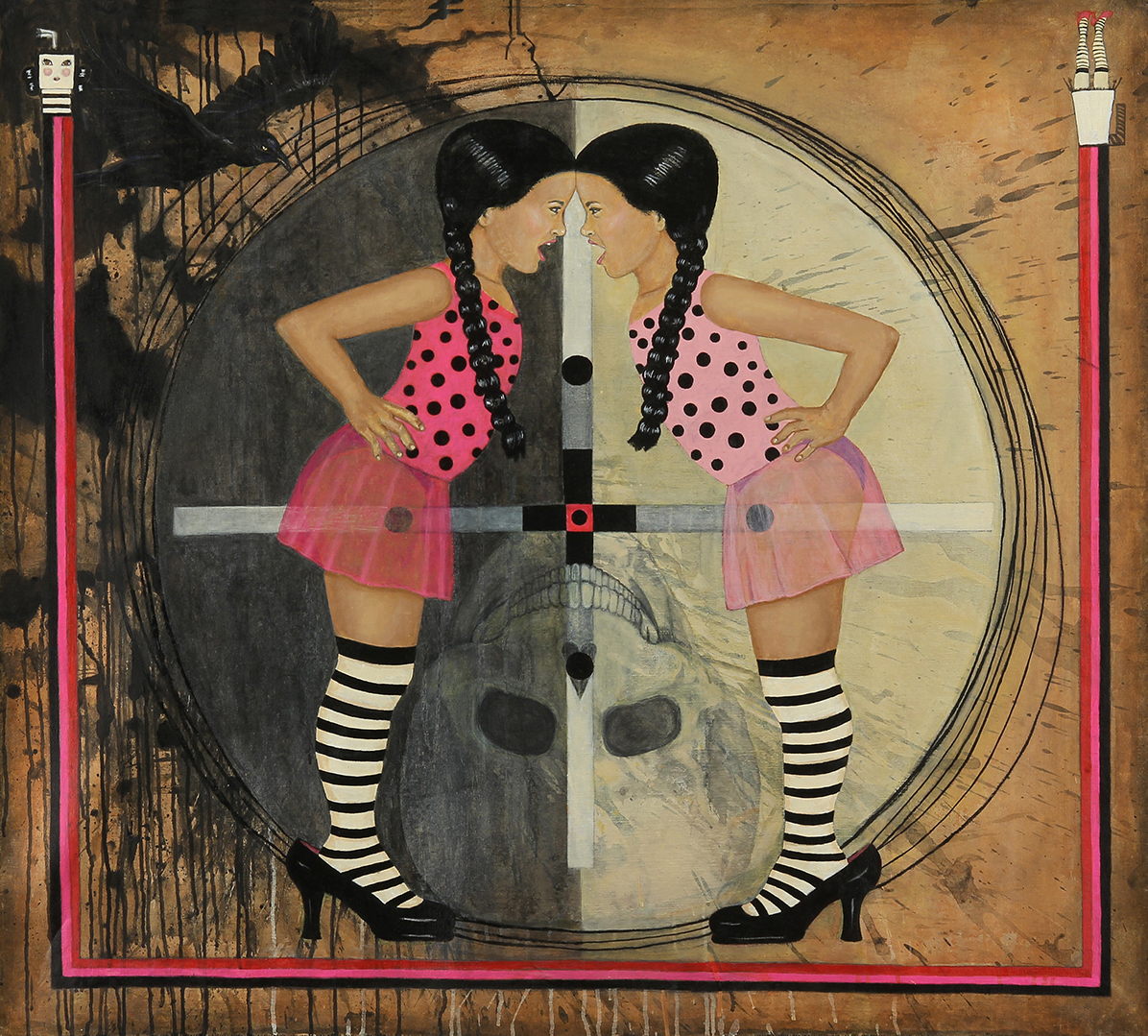 Like many contemporary Native artists, Geri Montano draws from her cultural background to address a broad range of issues. Her works include large-format drawings on paper and sculptures that reference the difficult history of Native American girls and women, including sex trafficking and the isolation of boarding schools. Montano chooses to focus on women to increase their visibility and because of the historical significance of Indigenous matriarchies. Although much of work focuses on emotionally difficult themes, Montano often uses humor as means to incite collective healing.

Geri Montano has a strong interest in working with under-represented members of her community and currently serves a visual art instructor for adults with developmental disabilities. Her work is included in the collections of the Crocker Art Museum, the Contemporary Jewish Museum, and The Mexican Museum. She was nominated for the San Francisco Artist Award. 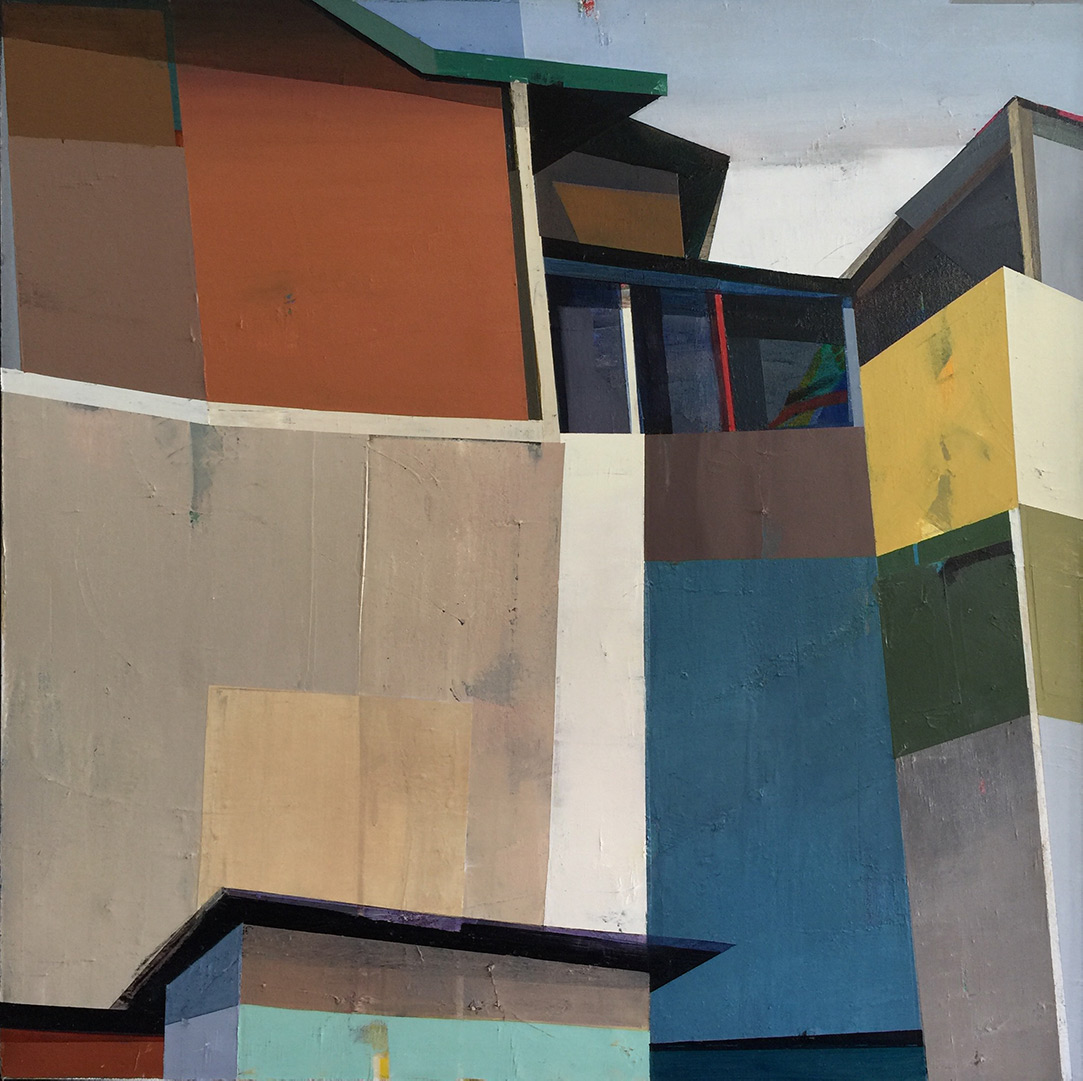 Richard Diebenkorn influenced a generation of artists, including Siddharth Parasnis, whose brightly colored work reflects not only one the Bay Area’s most famous artists, but Parasnis’s own travels throughout the world. However, he doesn’t recreate a specific place. Rather, he paints landscapes that reflect his admiration for real buildings and cultures that “haven’t lost their souls” (John Seed, 2017).

It’s impossible not to feel the humanity in Parasnis’s work, even though they’re devoid of humans. According to Parasnis, he wants to “create an ambience like a stage … a feel of human existence, but with no human. Bay Area painter Nathan Oliveria’s figures are not portraits, for instance. They could be any person” (Art News, 2017).

Siddharth Parasnis is represented by Caldwell Snyder Gallery. He received the Crocker-Kingsley Curator’s Choice award in 2017 and a Pollock-Krasner Grant in 2012–13. His work is included in the collections of the Crocker Art Museum, the Bakersfield Museum of Art, and the Dell Foundation. 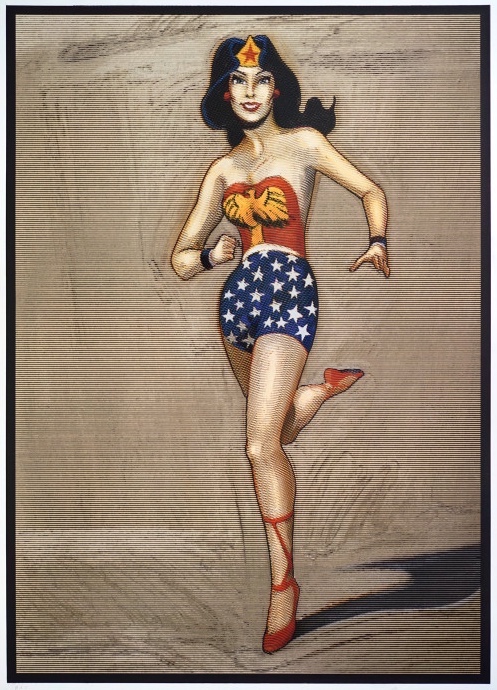 Sacramento-based Pop artist Mel Ramos (1935-2018) is best known for his paintings of superheroes and female nudes, many of which are painted alongside logos or branded items. He describes the former as paintings of people he respects and the latter as commentary on the way capitalism has employed the female body for its own use.

Ramos came to his Pop Art subjects not just because to do so was contemporary, but because he felt traditional portrait and still-life painting lacked authenticity. Currency could be found in the saturation of American life with television and pulp media. Ramos’s subject matter — and Pop Art broadly — projected the interests and experience of an emerging generation.

Mel Ramos’ work is included in many public and private collections, including the Crocker Art Museum, the M. H. de Young Memorial Museum, the San Francisco Museum of Modern Art, and the National Gallery of Art.

The daughter of two well-known artists, Marilyn and Peter VandenBerge, Camille VandenBerge grew up surrounded by artists like Wayne Thiebaud and Robert Arneson. Like her father, Camille VandenBerge creates abstracted, elongated figures — some as tall as seven feet — which are inspired by Asian aesthetics and motifs. Unlike her father, most of her sculptures are of women, a tendency she jokingly attributes to the ugliness of men (VandenBerge, 2020). In actuality, her interest in the female form is rooted in her sense of identity and a reverence for the situation of women around the world.


Camille VandenBerge has exhibited in Europe, Asia, and throughout the United States. Her works can be found in the permanent collections of the Crocker Art Museum and The Shigaraki Ceramic Cultural Park in Tokyo, as well numerous private collections.