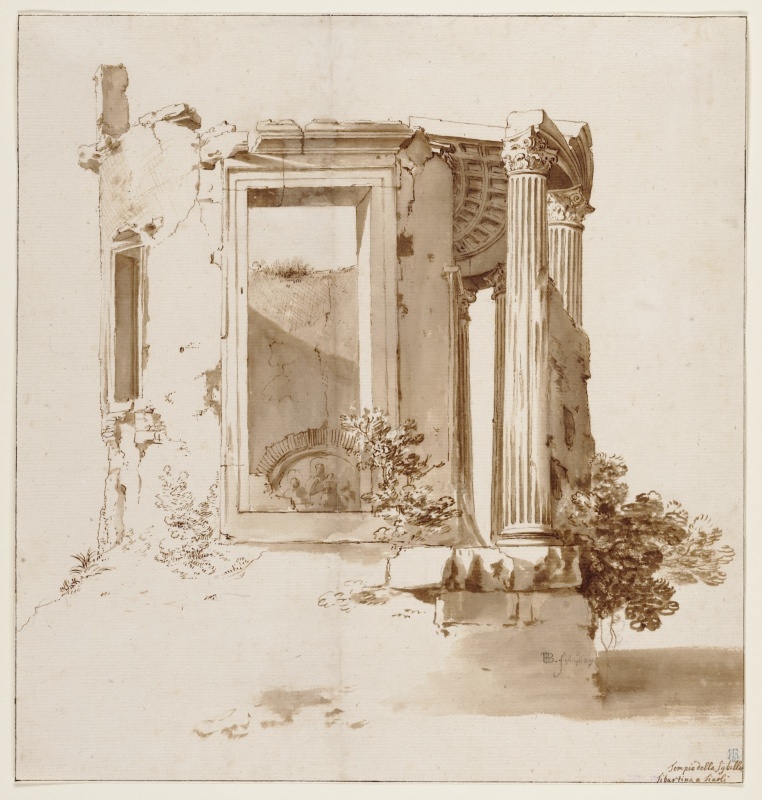 Beginning in the 1620s, groups of artists from the Netherlands traveled to Rome to experience and record the landscape surrounding the city. Its hills and ruins appealed greatly to artists raised in the tidy coastal plains of the Low Countries. Bartholomaeus Breenbergh arrived in Rome in 1620 at the age of 22 and found lodging with Paul Bril, a pioneering Flemish landscapist who had begun work at the Papal court in the 1570s. Breenbergh soon became part of a new community of younger artists who took sketching trips into the countryside. This group included another young artist whose drawings are often confused with Breenbergh’s, his countryman and probable friend Cornelis van Poelenburgh. Breenbergh returned to the Netherlands by 1633 and continued to produce paintings and prints in the Italian style by drawing upon his large stock of sketches. Soon he merged landscape with narrative, integrating Old Testament and other stories into views of the Roman countryside. He also produced purely figural narratives once his interest in landscape began to wane.

This drawing records the appearance of one of the most attractive monuments in the Roman Campagna, the ancient temple of the Tiburtine Sibyl. Overlooking the falls of the Aniene river, the temple had been converted into a church in Christian times. Leaving aside its dramatic context, Breenbergh concentrates on the building, including a fresco of the Madonna and Child on an interior wall. One of the greatest strengths of the drawing is Breenbergh’s ability to capture the reflections of the Italian midday sun in pen and wash.