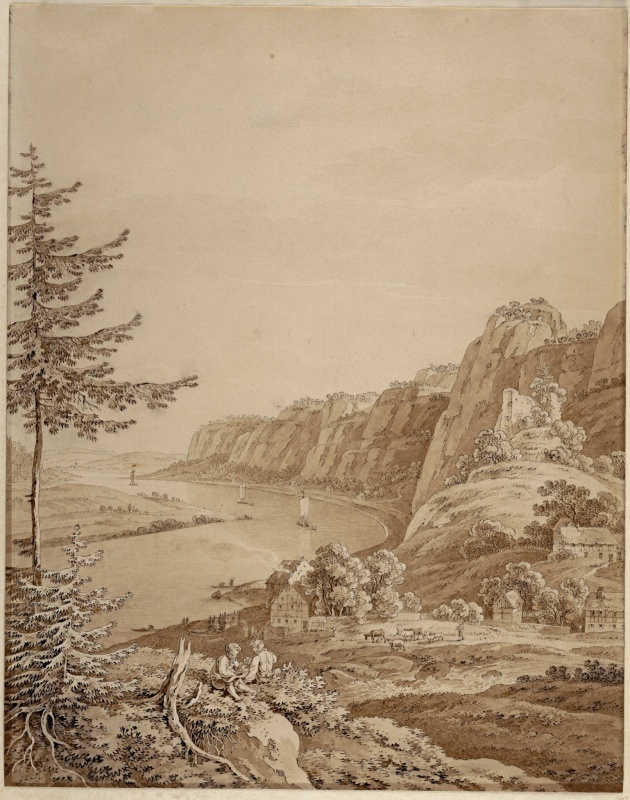 The Swiss artist Adrian Zingg received his training among printmakers in his native country and in Paris, but the greatest part of his career was spent as a landscapist in Dresden. The son of a Zurich gunsmith, he moved to Bern at the age of 23 to study with the printmaker Johann Ludwig Aberli. Recognizing his talent, Aberli took Zingg to Paris, where he became a student of Johann Georg Wille, who promoted the careers of a generation of German-speaking artists. Zingg was appointed to the faculty of the Dresden academy at its founding in 1764 — perhaps on Wille’s recommendation — and arrived to take up the appointment in 1766. He directed the printmaking department and, in the company of his countryman Anton Graff, made sketching trips along the rugged landscape bordering the Elbe river. They named the district the Sächsische Schweiz, or Saxon Switzerland, for its wild beauty, a name that it retains today. The author of two books on landscape and the master of numerous students, Zingg died in 1816.

The Bastei rocks are a formation along a curve of the Elbe. The Bastei, or bastion, is the turret-like rock at the center of the formation, seen here before a pedestrian bridge was built across it in 1824. Even now, a sequence of such picturesque views along the river are connected by the Malerweg, or painter’s pathway. This modern tourist route has its roots in Zingg’s sketching trips south of Dresden with his students two centuries ago.