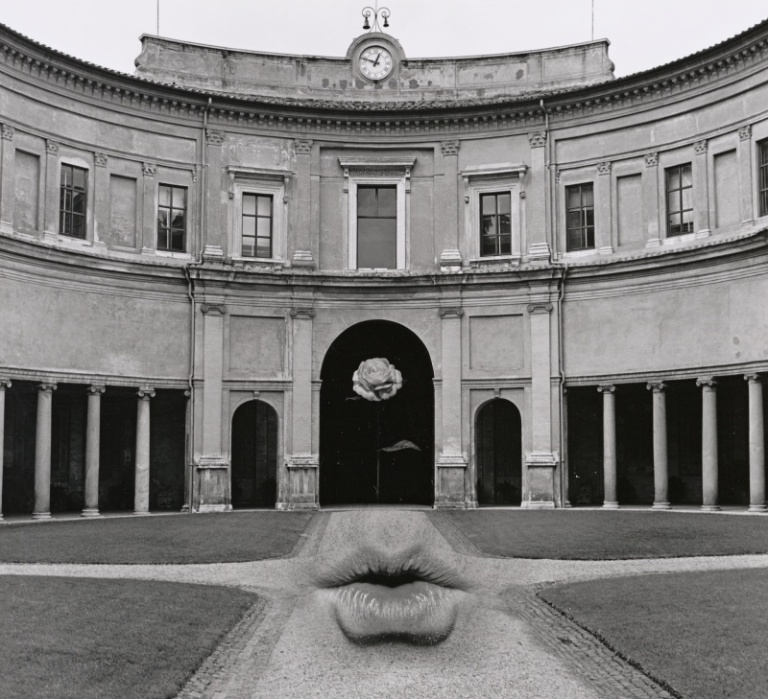 By the end of the 1960s, straight photography had been the dominant mode for nearly 40 years and had long been considered the medium’s most honest expression by critics and photographers alike. Surrealist experiments with photomontage by artists such as Man Ray, however, were not forgotten. Jerry Uelsmann was drawn to the idea of using photography to convey metaphor, allegory, and enigma, and he created extraordinary photographic juxtapositions suggesting magical awakenings. Uelsmann’s images were particularly effective because he began his reveries with straightforward photographs, such as the courtyard and colonnade seen here, that are readily regarded as realistic and truthful.

In this untitled 1976 print, the beckoning rose bloom is unexpected and suggestive, as are the lips like that of an oracle proffering secret knowledge. The image encourages interpretation and provides the viewer with a participatory experience. Such a vision of photography was rooted in the 19th-century innovations of Oscar Gustave Rejlander and Henry Peach Robinson, whom Uelsmann studied, assimilating their combination-printing techniques. Working long before the techniques of digital photomanipulation made such things easy, Uelsmann overlapped multiple negatives or substituted key details of one scene with another, using a photographic enlarger, which also gave him the freedom to creatively alter scale to create topsy-turvy “realities.” All of the pictorial elements, however, come together in a seamless mechanical perfection that reinforces the probability of the event or events pictured.