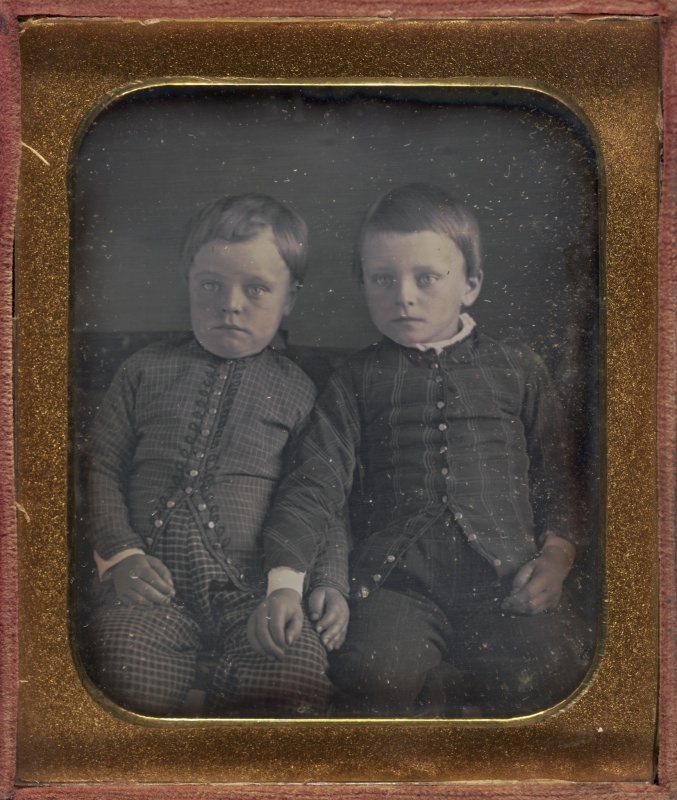 Modern photography began with Parisian Louis Jacques Mande Daguerre’s 1839 announcement of the daguerreotype. Daguerre had succeeded in permanently fixing images on sheets of silver-plated copper with chemical vapors. His process captured the physical appearance of objects with a degree of detail never before seen. In the fall of 1839, news of his breakthrough reached the United States. Many entrepreneurs learned the technique and found it especially suitable for portraiture. The United States became the daguerreotype’s largest market, and here the convention of packaging the fragile images behind glass within small, hinged cases arose. Some portrait galleries even hand colored images, if the customer desired.

The Gold Rush brought pioneering photographers from around the world to California. They found demand for their services in San Francisco and the mining camps. All manner of subjects — diggings, cattle, and buildings — were recorded, and the daguerreotype often served as a document of authenticity and ownership. The most frequent use of the daguerreotype, however, was for portraits. Infant mortality in this frontier was high, and photographers were not above playing upon parents’ fears by urging them “to secure the shadow ’ere the substance fade,” but doing so was foremost an expression of familial love and pride.(1)

Out of the hundreds of photography businesses established, most did not survive California’s dramatic economic cycles of boom and bust. The daguerreotype also faced competition from other emerging processes such as the ambrotype, first introduced commercially in 1851. This process used a glass plate, not expensive silver and copper. It is actually a negative that appears positive when set against an opaque backing, thus the convention of ornamental cases was also adapted to their packaging. They were easier to view, and the fact that they were less expensive and faster to make secured their place in the market.