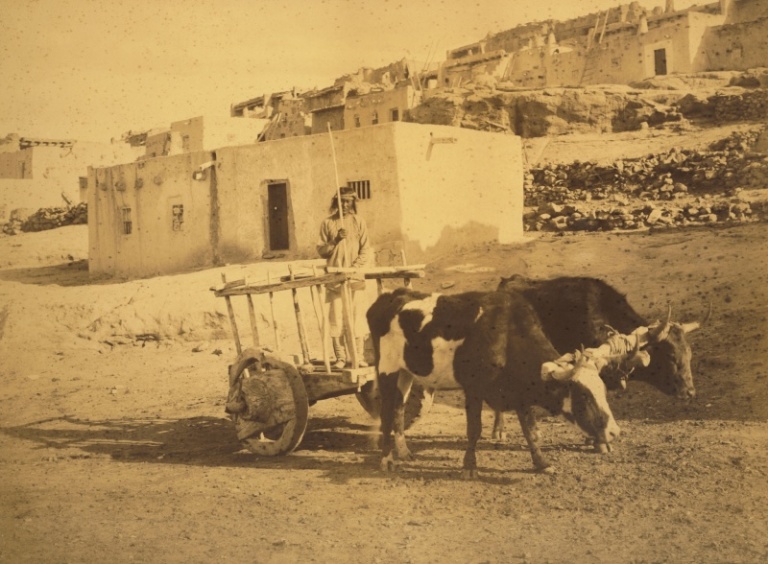 William Henry Jackson, like Carleton Watkins, helped Americans comprehend the vast stretches of Western wilderness acquired during the 19th century. These early photographers traveled to remote areas, and the heavy cameras, glass plate negatives, and darkroom equipment they took with them added to the monumentality of their task.

Following the Civil War, Jackson first established a studio in Omaha, Nebraska, but what he sought was adventure and exploration. In 1870, he joined Ferdinand V. Hayden’s expedition for the United States Geological and Geographical Survey, an eight-year project that took the team to Colorado, Wyoming, and the American Southwest. Much of the wilderness they surveyed was recorded by camera for the very first time by Jackson. Such images illustrated official reports or were bound into albums for Congress.

In 1879, Jackson established a studio in Denver, Colorado. Throughout the 1880s he photographed the landscape, often on commission, but among his thousands of negatives appear many studies of Southwestern peoples such as the Laguna. This image was later sold as a colorized postcard by the Detroit Publishing Co., which Jackson joined in 1897. Jackson’s scene, however, was embellished for popular appeal with the addition of two female figures and strings of drying peppers fronting the adobe. Doing so helped to establish stereotypes, an ironic twist to Jackson’s early dedication to providing a presumably objective record of the West. In the original image, Jackson photographed this Laguna man alone, posed with his cart and oxen. A slight blurring appears from the movement of the ox’s tail.