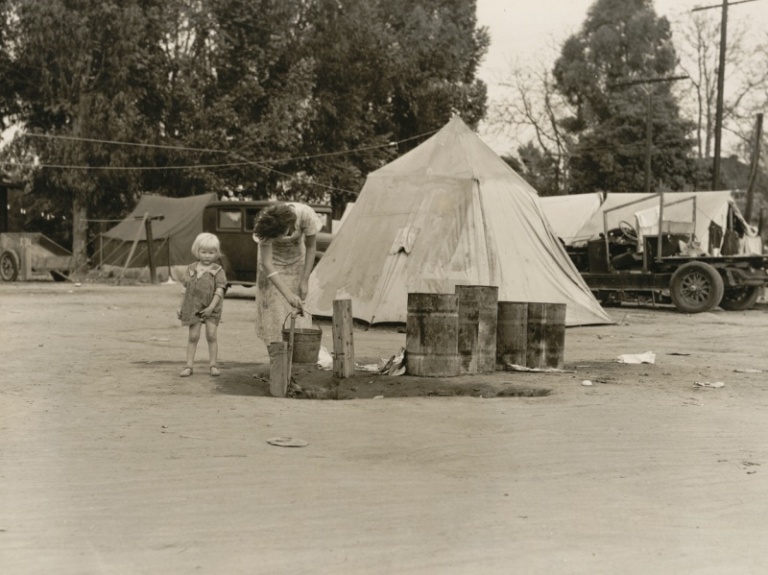 The Great Depression drew photographers such as Dorothea Lange to look more closely at the experiences of others. She saw suffering and poverty on San Francisco’s streets and began to record her observations with her camera. When they were exhibited in 1934, Lange’s images were noticed by California’s State Emergency Relief Administration, which then hired her to document the conditions under which migrant workers labored.

In early 1935, Lange made her first documentary trip for the Federal Resettlement (later Farm Security) Administration (FSA). The pictures she made appeared in reports used to inform government officials about a growing plight. In California, Lange captured some of her most memorable images. The devastations of economic crisis, poor land management, and drought that besieged the Midwest and South had set families adrift. Many came to makeshift camps near productive fields such as this one outside Exeter, California, which Lange visited in 1936.

Here, Lange documented families from as far away as Texas and Missouri who had relocated in the hope of finding new livelihoods and fresh starts in California. Her images were straightforward but always underscored the humanity of the individuals she encountered. Throughout the decade, Lange was dedicated to recording the need for economic and social relief. Her work took her and husband Paul Taylor across the country to record, region by region, the effects of the Great Depression. Many of her most moving images taken for the FSA appeared in various publications, helping to inform a nation about the hardships of others and to inspire reforms.