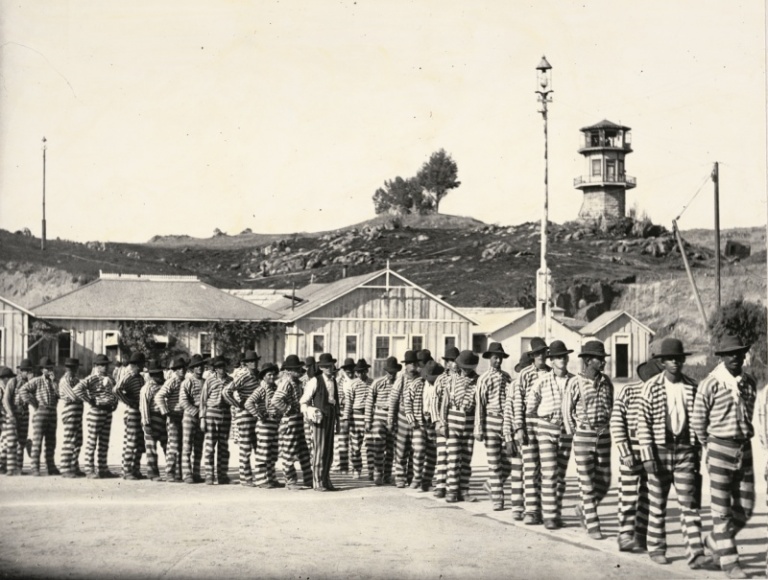 California’s first prison was the ship Euphemia kept in San Francisco Bay. While San Quentin was established in 1852, by 1861 the legislature recognized the need for another prison, and in 1878 construction of Folsom Prison commenced. The Folsom site outside of Sacramento was near a river, rail transportation, and had enough granite that prisoners brought in from San Quentin could quarry the materials needed to construct the prison, hard labor being part of their punishment. With its first two cell blocks complete, the prison was officially opened in July 1880. It was the first U.S. penitentiary to have electricity, after the Folsom Dam was completed using prison labor, in 1893.

It took more than 40 years to complete the granite wall enclosing the prison grounds. Since 1865, California code had dictated prisoners wear the striped uniform, but Folsom prisoners were by necessity permitted to keep the coat, vest, and hat worn on arrival, thus the variety of pork-pies, bowlers, and fedoras seen here. Not until the progressive prison reform initiatives of the 1910s and 1920s would the stigma of the stripes be addressed. Unlike many extant historical images, these men are aware that they are being photographed, and several look directly at the camera. The date range for this photo can be narrowed down by the presence of the electric pole lights and incomplete section of granite wall, as well as the finished base of the guard tower.