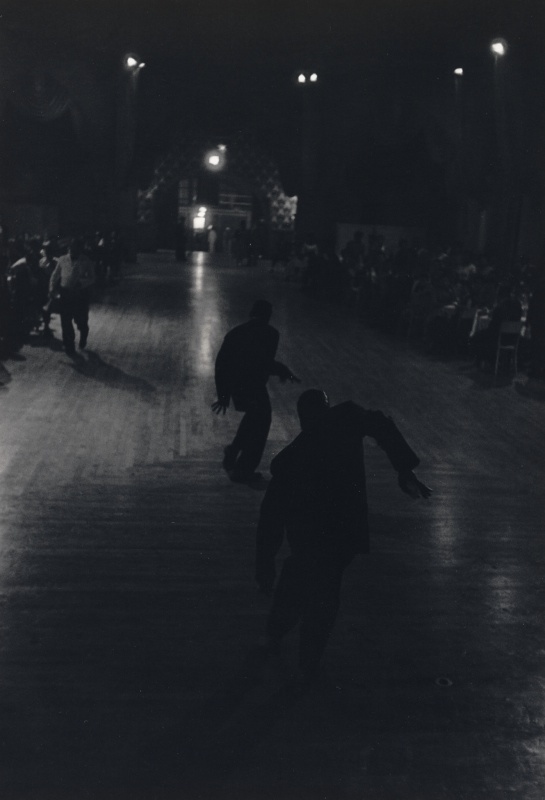 In the 1950s, the street photography aesthetic, so called for its emphasis on the candid shot of activities taking place in urban settings, ascended to popularity particularly in New York. Roy DeCarava, born and raised in Harlem, concentrated in this era on Harlem’s residents, New York’s jazz scene, and the musical personalities so closely associated with both. Described as “a photographer who seems to see best in the dark,” DeCarava uniquely mastered the technical demands of using a small, hand-held camera to read the gratifying dusk of the nightclubs and taverns where musicians performed.(1)

While DeCarava’s images are often evocative in the way figures emerge from rich shadow, he was not without a directed point of view. In 1952, he became the first African American to be awarded a Guggenheim Fellowship and, in 1955, collaborated with poet Langston Hughes on the book The Sweet Flypaper of Life, a compendium of meditations on life in Harlem.

This image, Dancers, New York, stirs conflicting emotions. DeCarava reports that the image was taken at a social club on Fifth Avenue and depicts the intermission entertainment of two men dancing to jazz music in an older, stereotyped vaude villian manner. The ambiguous nature of their dance, a matter of style versus debasement, was for DeCarava emblematic of the period. While the entertainers were free to dance as they wish, according to the artist, “The problem comes because their figures remind me so much of the real life experience of blacks in their need to put themselves in an awkward position before the man; to demean themselves in order to survive, to get along.”(2)