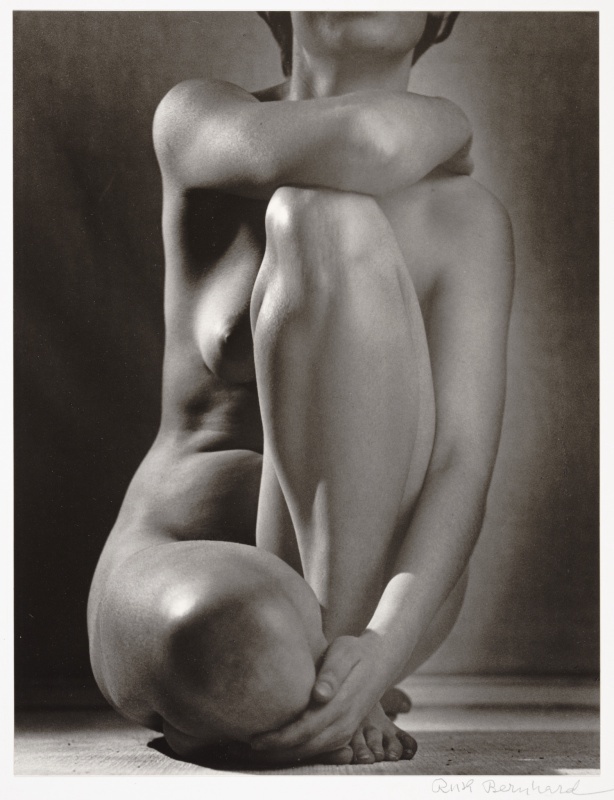 The nude as the subject of Ruth Bernhard’s photography came as a sudden inspiration for a 1934 Museum of Modern Art commission. It would become a classic subject for the artist only after she met Edward Weston in Los Angeles in 1935. By this time, Weston’s approach to photography called for using the camera to explore essential forms, as seen in his studies of nudes and still-life subjects from the 1930s. Superfluous detail and decorative elements were stripped away so that all that mattered were the lines, curves, highlights, and shadows at play in the image. This proved revelatory to Bernhard, who also found the feminine form ideal for light’s descriptive play.

By the time Bernhard encountered Weston, she had already been a successful commercial photographer in New York, working steadily since 1927. Much of her early work showed an innate interest in a clear, tight photographic gaze. This produced an economy not often suitable to commercial work, but one which she grew emboldened to pursue.

Bernhard moved to Los Angeles in 1936 and, later, in 1953, to San Francisco, where she became involved with a group of Bay Area photographers. Bernhard’s nudes, such as Classic Torso, were hailed by peers Ansel Adams, Imogen Cunningham, Wynn Bullock, and Dorothea Lange for the sensuous, intimate, and evocative manner in which she captured the shapes and planes of the body.