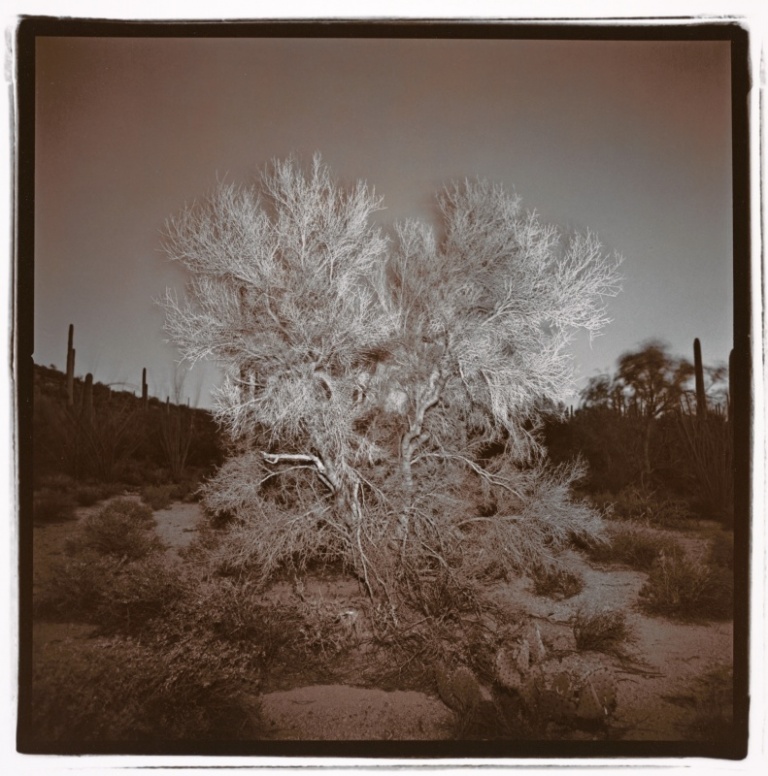 Richard Misrach figures among the first artists to pioneer large-scale work, yet one of his most compelling series began with the 15 x 15-inch prints that signaled the start of his long artistic engagement with the American desert.

Misrach, a native Californian, was inspired by his earliest childhood impressions of the Mojave. What appeared forbidding became a source of mystery. In 1975, he began making black-and-white images that were unique for capturing the desert at night. To do so, Misrach used strobe lighting and long exposures, holding the camera shutter open — sometimes for hours. The resulting prints feature a perfectly centered creosote bush, fan palm, cactus, or others against the landscape lit by eerie, artificial brightness.

In this new take on the landscape, Misrach addressed concerns not uncommon to photography during the 1970s. The challenge of photographing in the desert at night allowed him to reinvent natural phenomena. Such images, rather than being literal documents, offered interpretation of humankind’s relationship with nature. In particular, Misrach’s focus on a single subject establishes an intimacy with the desert that counters the notion of a vast and empty wasteland. This image was chemically toned to lend a soft coloring, and the paper it was printed on is no longer manufactured.