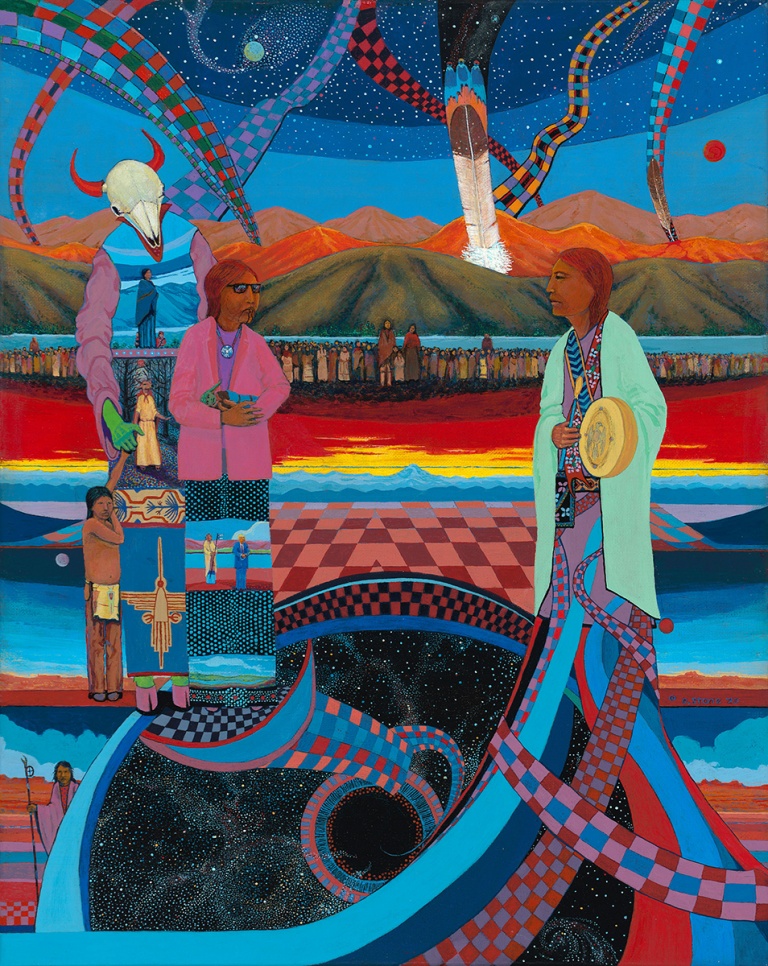 The painting Crossroads is the middle painting in the trilogy of this Watcher series. It is set in the time of the people’s exodus from their home world. The crossroads or nexuses is a point located in several places on this world. They are accessed by watchers and more advanced life forms to travel from world to world. Thru time, dimensions, and universes they can teleport.

The Watchers know that to live it is time for humanity to find a new home as imminent disasters long foretold have arrived. They have summoned the Red-Haired Giants to call and gather those who will listen. The gatherings guided by the giants and Watchers access the Nexuses to travel to a new home world.

In many of my paintings I have portrayed as many as 7 different worlds on one canvas, each having its own sun and moon. In this painting I have incorporated several iconic depictions of this world through out. In the bottom left corner is a man involved in a Sun Dance ritual. He has 3 buffalo skulls attached to leather ropes attached into his muscles. He will walk dragging the skull until they rip free from his body. He has a staff to help move forward. In the clothing of the Watcher are 1) two images from the Nazca lines 2) a Deer Woman 3) an Indigenous woman in her homeland. In the clothing of the female Red-Haired Giant is a depiction of Trump handcuffed in custody of an Indigenous leader. She is cradling a Baby Yoda like being. Her necklace has a pendant whose image is the IAIA symbol. The Watcher has a reassuring and protective grip on the adolescent boy. The three are entering the portal of the nexus. On the right the male Red-Haired Giant has just finished a call to gather for the people that will heed his message. I’ve snuck in a little bit of Seminole in his sash and bandoliers.

A large gathering of people that have heeded the call are approaching. In the back of the pack are 2 Sasquatch. From the heavens different messages, warnings, and prophecies have repeatedly been sent to the world, mostly ignored. I use the checkered designs to try to show movement, motion, and mystery. This painting while it does not have a kitchen sink (no more room) took about 250+ hours of time to do.