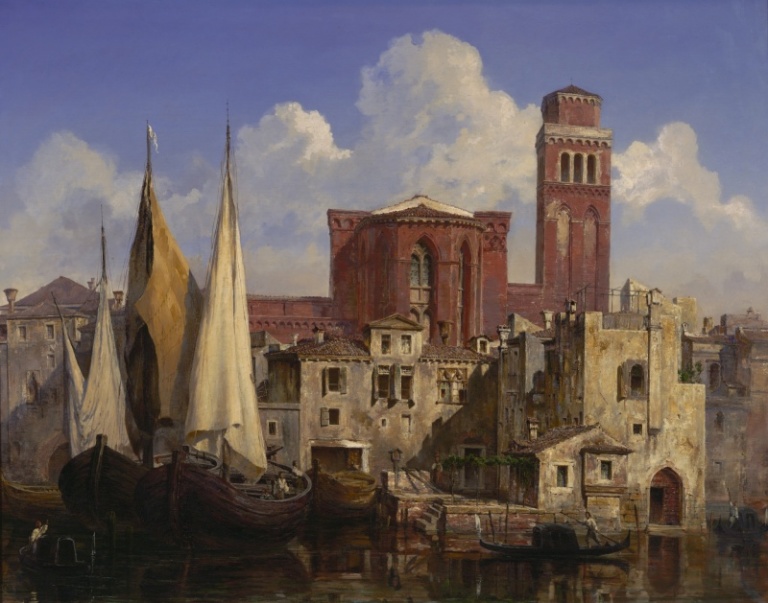 An architect as much as an architectural painter, Ludwig Theodor Choulant was especially inspired by the unique buildings of Venice. The son of a medical doctor in Dresden, Choulant trained first as an architect at the city’s Polytechnic Institute and, beginning in 1846, in the architecture school of the art academy. In 1850 and 1851 he traveled in Italy, where he visited Venice as well as central and southern Italy. Upon his return to Germany he entered scenes depicting his trip in many exhibitions. Choulant also painted views of architecturally distinctive cities in Germany, including Nuremberg and Meissen. He ultimately gained greater fame for his skills as a painter than for his activity as an architect.

Choulant returned to Italy many times in the 1860s and ’70s, even after he became court painter of Saxony in 1868. This appointment also brought him the opportunity to practice architecture through the renovation of the court theater and the palaces in Dresden and Meissen. In later years he served as professor of perspective in the Dresden Academy.

This view of a Venetian byway reflects Choulant’s architectural interest, focusing on the vernacular houses of a minor canal rather than sweeping views of Piazza San Marco or the Grand Canal. The church in the background, Santa Maria Gloriosa dei Frari, is currently not visible from a canal in this position, meaning that the canal has either been filled in since this view was painted or that the artist took artistic liberties with his subject.