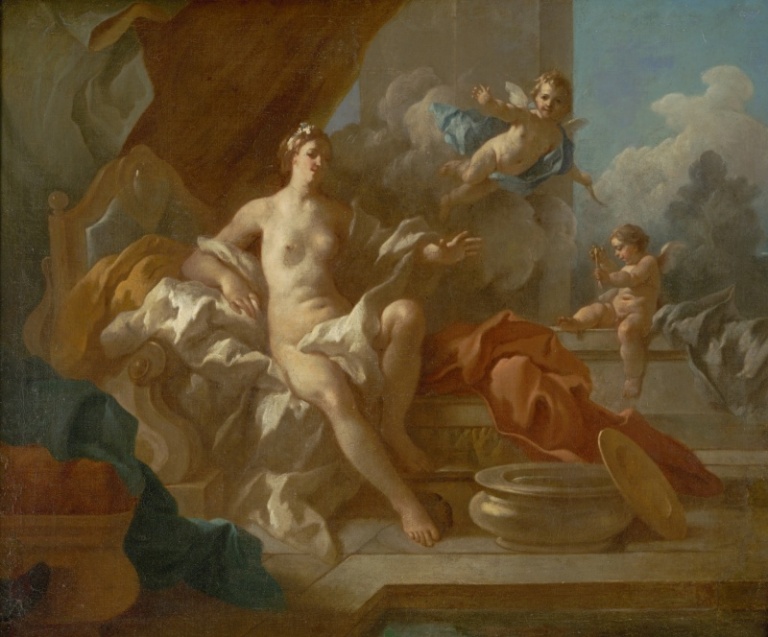 Pierre-Jacques Cazes studied under René-Antoine Houasse and Bon Boullogne, both pupils of one of the founders of the Académie royale, Charles Le Brun. Cazes won the Prix de Rome in 1699 after coming in second in 1698, but he preferred to remain in Paris instead of traveling to the papal city. He gained success in religious and secular history painting by adhering to the principles of the Académie, where he was received as a member in 1703. By 1718 he had been made professor there and shortly thereafter received what was likely his first royal commission, a ceiling for the Tuileries. He then joined a team of artists working on decorations for the Hôtel du Grand Maître at Versailles, which was completed in 1724. Other Versailles commissions included a 1727 altarpiece for the new church at the Parc-aux-Cerfs, which depicted the Virgin in Glory, and paintings for the Petits Cabinets du Roy.

The first master of the painter Chardin, Cazes had his greatest success at the Académie in 1743, when he was made rector. In following years, he became director and finally, chancellor. According to the king’s secretary and independent collector Antoine-Joseph Dezallier d’Argenville, Cazes was especially adept at suiting his style to his subjects. In this mythological painting, the dark setting is brightened by the body and drapery of Venus, who is presented for the viewer’s pleasure as much as for her role in antiquity.