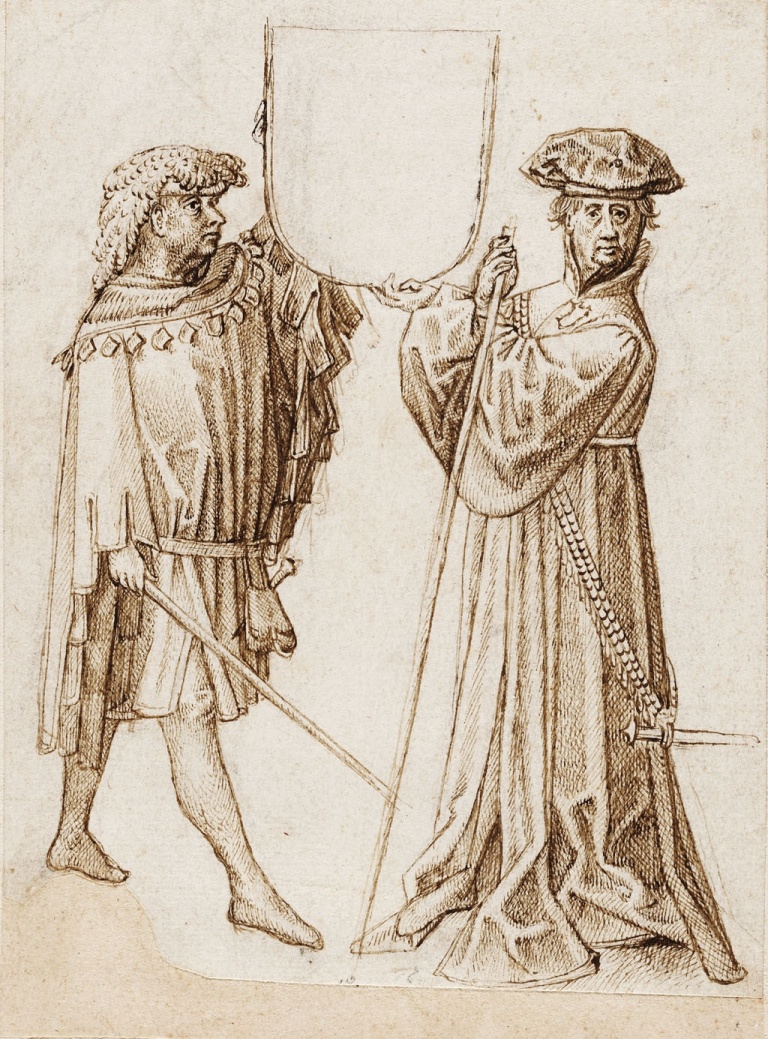 After years of study the identity of the artist of this work as well as the school to which he belongs remain elusive. From the late 1930s through much of the 1950s the drawing was considered to be German mid-fifteenth century, most likely the work of a printmaker for a woodcut or engraving. As early as 1957, however, Friedrich Winkler suggested that the work must date to 1480-90, somewhat later than originally thought, and was most likely by a Flemish artist working in the School of Ghent.(1) By 1978 most scholars essentially subscribed to this opinion. Even before Winkler, however, Agnes Mongan had gone a little further (in a 1938 handwritten note on the mount of the drawing) and suggested that the drawing might be Burgundian.

In looking at the drawing, the viewer is almost immediately aware that the costumes of the two men clearly date to the first decade of the fifteenth century rather than either the middle or late fifteenth century. Their clothes are very close to those worn by the people represented in manuscript illuminations like the Très Riches Heures by the Limbourg brothers, which dates to the early 1400s, as well as to costumes worn in Van Eyck's paintings. The man on the left stepping forward wears a short tunic, cape and beret not unlike the costume of the kneeling figure in the so-called Fishing Party in the Département des arts graphiques of the Louvre.(2) He steps forward as does the man on the far right of the Fishing Party, except that his pose reverses that in the Crocker drawing. In the latter, the two figures are somewhat unrelated in the space of the drawing, connected to each other only at the top of the image where they both grasp the escutcheon. The man on the left wears a short costume with dagged sleeves and edges, while the man on the right wears a long outer garment with full sleeves called a houppelande.(3) Moreover, the sword or short stick worn by the man in the beret is incomplete in the drawing and intersects the long walking pole held by the other figure in a meaningless way. Details like this as well as the late fifteenth century style of the pen work itself suggest that these two figures are not original but most likely were copied from an earlier composition or compositions such as the Fishing Party.

The name of the Master of Mary of Burgundy,(4) an illuminator who was active in and around Ghent late in the century, was the suggestion of Jeffrey Ruda (1992). Profesor Ruda compares the features of the men in the Crocker drawing with a sheet of head studies by the Master of Mary of Burgundy in Berlin.(5) There is a much greater resemblance between the Crocker drawing and another sheet in Berlin attributed to the Master of Mary of Burgundy, Allegory with Venus as Vanity in which the profile features of two men are similar to the men in the present drawing, executed in pen and brown ink as well.(6) Professor Ruda's suggestion that the Crocker drawing might be a miniaturist's design for a genealogy (book or scroll?) with ancestor images is ingenious and might account for the archaic costumes as well as the empty escutcheon supported by both figures.

(1) Winkler in a letter of 1957, of which record survives in Crocker curatorial files but which is not extant.

(2) School of Jan van Eyck, Inv. 20674. It was Roger Wieck, Curator of Medieval and Renaissance Manuscripts at the Morgan Library & Museum, who called my attention to this resemblance.

(3) The houppelande is basically an outer garment with a long full body and flaring sleeves that was worn by both men and women in Europe in the late Medieval period. Sometimes it was lined with fur and it was later worn by the professional classes, It appeared around 1380 and remained fashionable well into the next century.

(4) An illuminator active in and around Ghent late in the century who is named for the patron of a manuscript of about 1480.

Provenance: Edwin Bryant Crocker, by 1871; gift of his widow Margaret to the Museum, 1885