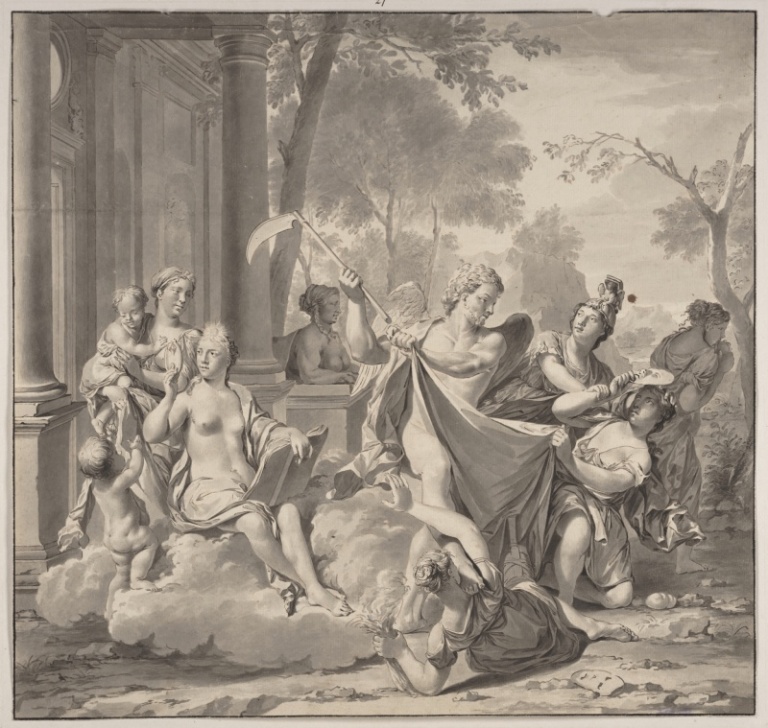 The son of the painter Jan Verkolje I, Nicolaas Verkolje spent the first part of his life in Delft. His father, a pupil of Jan Lievens, worked in a style that recalled earlier Dutch masters. Nicolaas was influenced by the Francophile Gerard Lairesse, who believed that Dutch art should assimilate the structure and style of the French Académie royale. Verkolje followed suit and became a history painter, casting aside the humble Dutch subjects of previous generations in favor of mythological narratives and allegories. Settling in Amsterdam in 1700, he remained in the city until his death. In addition to paintings he made prints, specializing in mezzotint, as had his father.

Time Unmasking Deceit reflects the stylistic and narrative clarity current in the French Académie. The glowing monochrome is used to define the polished flesh and flowing drapery of allegorical figures who interact in the portico of a temple before a deep landscape. Their poses and gestures tell the story of a moral triumph. At left, Truth, with her sun diadem, descends on a cloud accompanied by Charity and her two children. Before them, winged Time with his scythe, aided by Learning in the form of Minerva, unveils the masked Deceit and tramples Jealousy, who carries a burning torch. Envy, literally eating her heart, flees the scene.