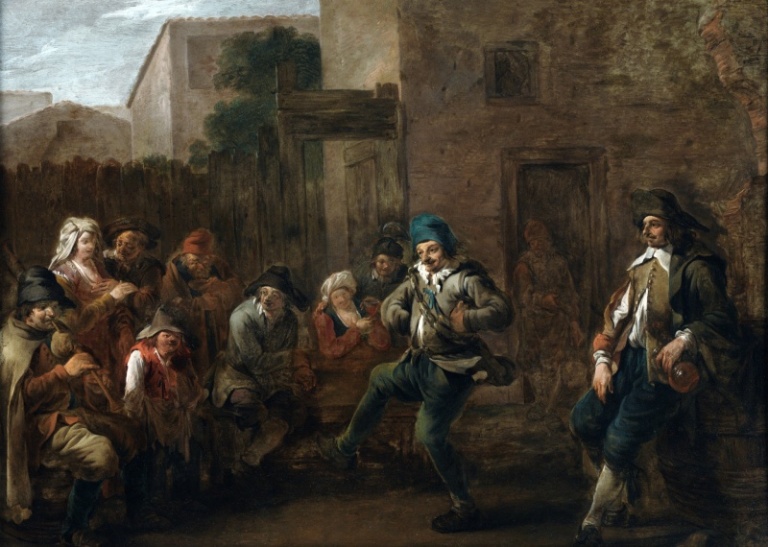 Born in Utrecht around 1612, Andries Both is documented as a pupil of Abraham Bloemaert in 1624 and 1625. Bloemaert’s travels led him toward a Mannerist style based on Italian models which, in turn, may have piqued his young assistant’s interest in Italy, where he moved in 1632. There, Both became one of the key artists in the group of Bamboccianti, Northern painters living in 17th-century Rome. Their rowdy lifestyle was infamous among the more restrained Italian artists, whose letters record their disdain. This opinion extended also to the paintings of the Bamboccianti, which they considered inferior because they dealt with the life of the lower classes rather than the idealized subjects of history painting. These paintings were popular, however, and Romans flocked to buy their humorous depictions of peasant life. This threatened the market and livelihoods of local artists and provided fuel for their jealousy.

Both’s brother Jan, also a painter, joined him in Rome in 1639. Their close association lasted only two years, since Andries was drowned during a visit to Venice in 1641. Though many of Both’s paintings pushed the limits of propriety with such subjects as nitpickers and drunken peasants, here he chooses the more picturesque theme of a peasant dance. The architecture and clothing are typical of Rome, while the heavy shade and bright spotlighting show the influence of Caravaggio.