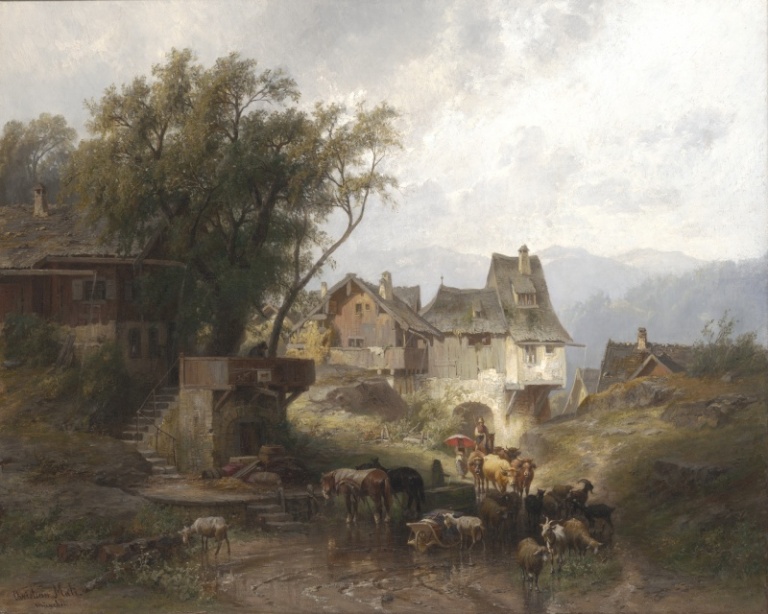 An artist whose first training was in woodcut rather than painting, Christian Friedrich Mali was born in the Netherlands to German parents. Mali studied landscape painting in Munich beginning in 1857. His brother Johann, also a painter, was instrumental in his training as well. After traveling to Italy, where he became interested in architectural views, and to Paris, he honed his skills with the landscapist Constant Troyon and then settled in Munich. His friend Anton Braith, with whom he built a house in the city, fostered his interest in animal painting. Their shared studio has been preserved as a museum.

The 19th century brought a new interest in the history, customs, and building traditions of the German people. Writers recorded peasant tales, while painters included farm life, rural buildings, and native costumes in their picturesque views. This interest grew stronger as industrial city dwellers looked back to an idealized rural past. Swabia, in southwestern Germany, was especially well-traveled by painters and literary men, who appreciated the unspoiled Black Forest. In this painting, Mali captures the humid atmosphere of isolated farmsteads after an afternoon shower. His detailed view shows his skills as an architectural, landscape, and animal painter. Since his family was Swabian, he may have had a personal interest in depicting such a scene.