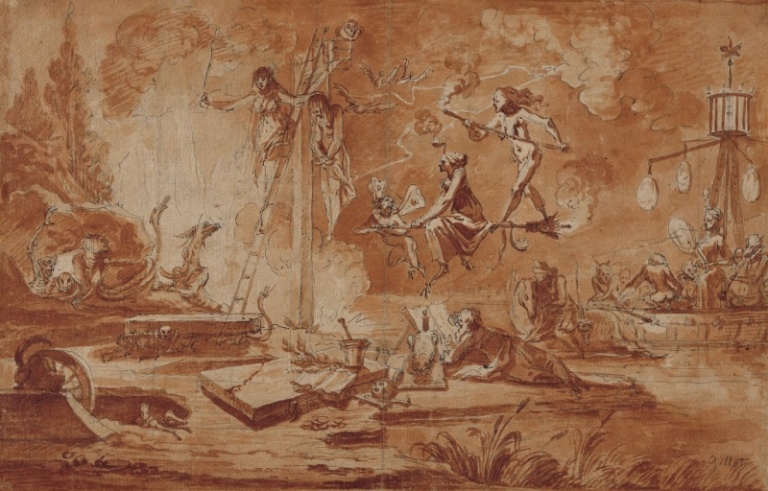 Born in the town of Langres north of Dijon, Claude Gillot was first trained by his father before being apprenticed to the painter Jean-Baptiste Corneille in Paris. His vivid imagination made him a skilled designer of book illustrations and theater sets, in which his knowledge of drama and comedy found free rein. Gillot was a member of the Académie royale from 1715, though even at that date he had discarded painting in favor of drawing and engraving. The master of Watteau, he surely contributed to the younger artist’s delight in the decorative and imaginative.

This sheet is one of Gillot’s most lively compositions. Before a witches’ sabbath, an aged man reclines reading a book, perhaps of spells. A female figure, her ladder placed against the gibbet, turns towards her audience of demons before cutting down the body of a hanged woman. Spirits and witches swoop toward her on a burning broom, the entire scene lit from behind with hellish flames. At right, a demon-filled boat approaches the shore, guided by the lighthouse behind and preceded by a sea-spirit. Other, smaller demons are scattered throughout the composition, some bearing a coffin. Though the scene may have served as a backdrop to a sinister play, it is more likely a purely creative independent work.